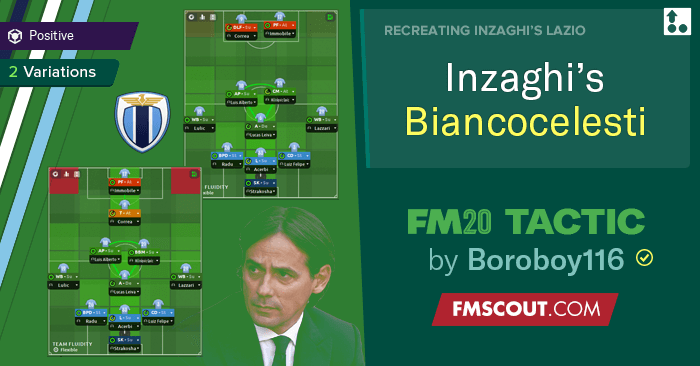 It was the year 2000, Lazio had just won the Scudetto to go with the Coppa Italia. Sven-Göran Eriksson created a squad of top quality, featuring names such as Nedved, Veron and Simeone et al. It was only Lazio's second-ever Serie A title and third Coppa Italia. Eriksson oversaw the most successful period in the club's history. Since then they haven't contended the title in the decades dominated by the Milan clubs and Juventus. Lazio had been in touching distance of the leagues elite clubs here and there but since 2010 Lazio had only reached the top four twice prior to this season.

Simone is the younger brother of Filippo, he has been associated with I Biancocelesti since signing for the club in the 1999/2000 season, he spent a decade playing for the club with two loan spells during that time. After his retirement as a player in 2010, he joined Lazio’s youth teams to start his career as a coach. After 6 years, he was named the caretaker coach of the senior team when Stefano Pioli was sacked in 2016. For the next season, Marcelo Bielsa was appointed as the head coach however he left after a week. Inzaghi was then appointed the permanent manager for the season 2016-17.

Inzaghi has brought a new flair to the blue side of Rome. Three words have now become synonymous amongst the football faithful in the eternal city Lazio, Simone Inzaghi and Ciro Immobile. The capital is more known for the legacy of AS Roma rather than Lazio, which is changing under Simone. Inzaghi has stamped his philosophy on the club and Lazio’s resurgence can be attributed to both his system and retention of the core of the squad.

The signing of Ciro Immobile back in 2016 has been a major turning point for both the club and the player. After a failed move to Dortmund to replace Lewandowski and loan moves to Sevilla and Torino, Lazio took a chance on him. Immobile delivered finding his scoring touch, he has gone onto score 103 goals in 142 games.

Serbian wonderkid Sergei Milinkovic Savic joined Lazio back in 2015 from Genk. The Serbian came with a big reputation and has since established himself as a mainstay in the first team. His passing, shooting, heading were the key strengths back in 2015 but now he is a complete midfielder who can be easily identified as one of the top midfielders in the world.

Luis Alberto the Spanish maestro often goes under the radar compared to his Spanish predecessors Xavi and Iniesta. Yet Alberto can be easily singled out as one of the most creative midfielders in the modern game with the stats back it up. Before the lockdown, The Spaniard was the top assistant in Serie A with 12 from 25 games. He has been the key driving force behind Immobile’s goals galore but he also finds the net himself and has scored a decent amount of goals considering he has been deployed deeper this season.

One thing has been constant in Inzaghi’s reign and that is the formation. Lazio play with a 3-5-2 or 3-5-1-1 formation that perfectly counters the general 4-2-3-1 and 4-3-3 variants played in Serie A. In goal they have a solid custodian in Thomas Strakosha In front of him is a stable back three of Francesco Acerbi who has been rock solid throughout the season. His experience has been a key factor in the development of his defensive partner Luis Felipe who complements the veteran defender with his speed. Stefan Radu, another seasoned Lazio man completes the back three. They are flanked with Manuel Lazzari on the right and Senad Lulic on the left.

Both of them play a crucial part as wingbacks. Supporting the counter-attack with their crosses and dropping back to protect the wide spaces around their box. Lucas Leiva has been a key figure as he mostly holds his position playing as the anchorman to give defensive solidity.

Milinkovic Savic is the box-to-to player who can shoot from distance, arrive late in the box and be an option for direct play. Luis Alberto’s role has been changed from a Trequartista to an advanced playmaker in the centre of midfield. Upfront Ciro Immobile is partnered with Joaquin Correa. The strikers drift into wide spaces to create space between the lines to encourage Milinkovic Savic and Alberto to get forward to support the attack.

The 5-3 set up helps Lazio defend as a unit. Also, the mid-block allows them to see off major threats away from their own goal. when winning the ball back they aim to counter or break quickly as they can double their numbers compared to the opposition.

This season has seen Inzaghi further develop Lazio's style of play. In previous seasons Lazio were a counter-attacking team. This season Lazio are more fluid in their buildup. Lazio mainly look to progress the ball along the ground through short intricate three-man combinations in the central areas. However, they are just as happy to bypass the opponent's press with longer passes towards Milinković-Savic. This reflected in Lazio's season average possession being 50.5%. 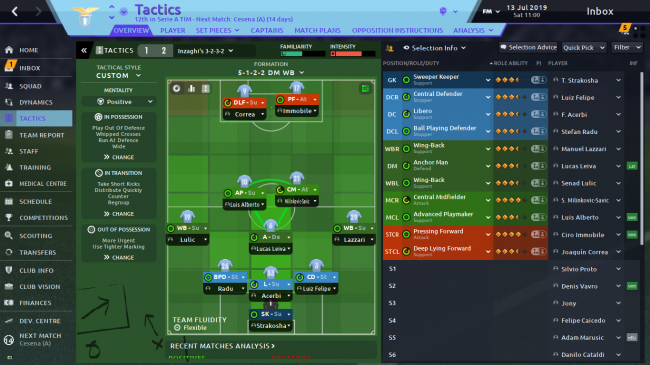 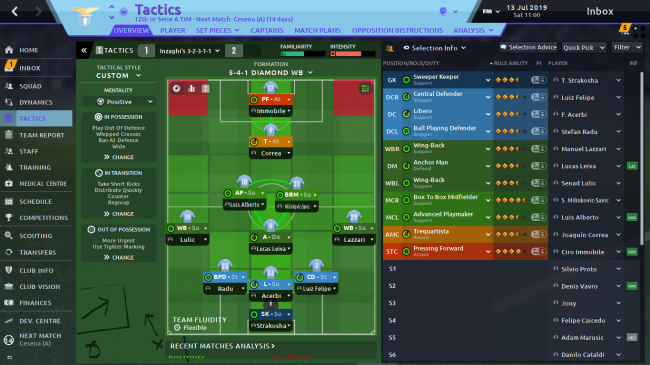 Firstly the screenshots above show the wingbacks on support however they are actually set to attack in the tactic. To try and get the balance between the passing combinations in the midfield and the more direct counters I set both the passing length and tempo to standard. Lazio's wingbacks exploit the wide areas and therefore width is set to wide with whipped crosses for Immobile to get on the end of. To recreate the Mid to Low block I have set the lines of engagement and defensive line to standard, with regroup and counter selected. Inzaghi prefers to play out from the back and thus distribute short is selected. Lazio also goes man to man when marking and therefore tighter marking is selected, although Lazio uses a mid-block to defend they don't just sit off the opposition they look to press and therefore urgent pressing is selected.

The results were an overwhelming success winning the Scudetto with ease and beating United in the Europa League final. My possession over the season was around 45% but in many games, possession was 55%+.In the early rounds of the cup competitions, I used a fully rotated squad to keep the main team fresh for the league. 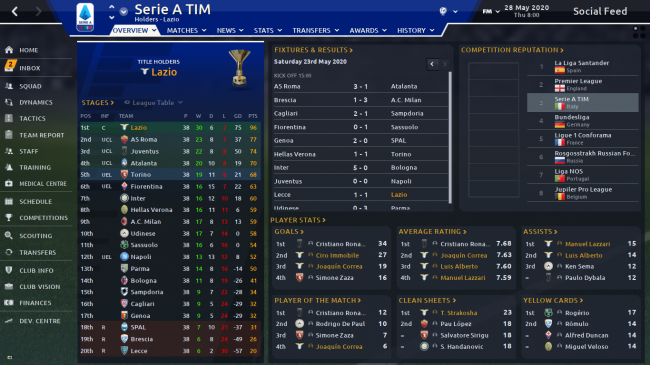 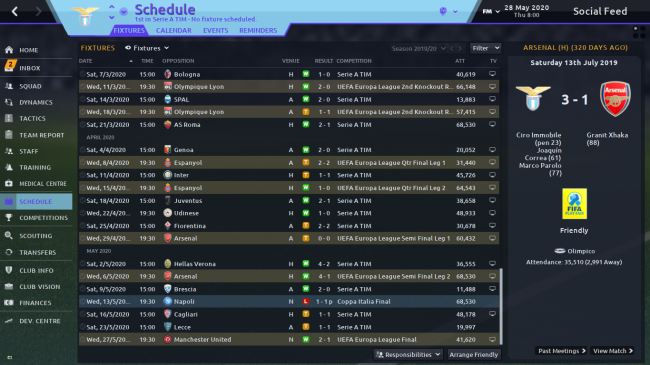 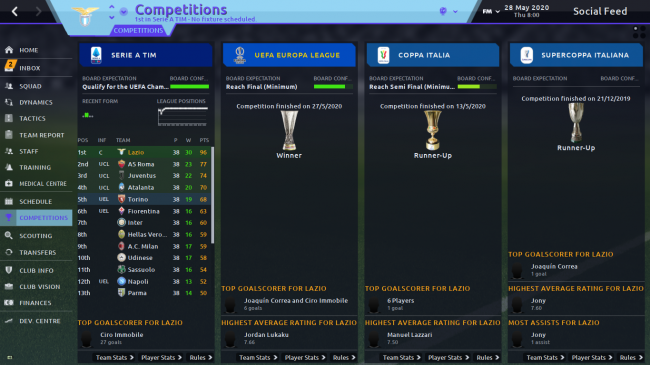