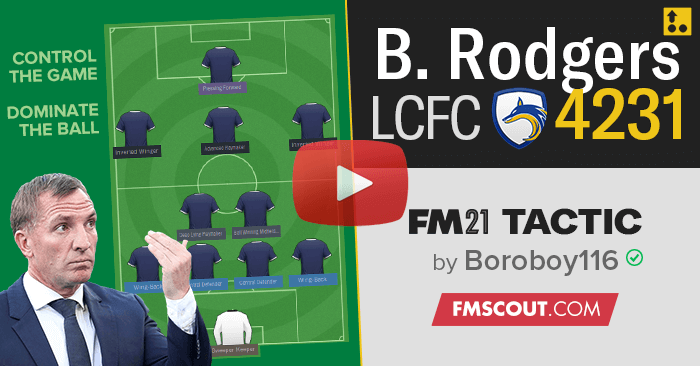 
One thing that separates Brendon Rodgers from many other British managers is his tactical flexibility. Unafraid to use different systems of play from the 4-2-3-1 at Swansea which drew comparisons to Barcelona, to the diamond that had his Liverpool team running over teams in attack akin to Klopp’s Dortmund. However, his principles of play are clear and have been put to the test across various leagues like the championship, premier league and the SPL with Celtic.

It’s all about the ball. Dominating it, looking to win it back quickly, owning it, this is especially true of his Swansea and Celtic sides with Liverpool being the outlier and Leicester being something of a hybrid between the two styles capable of playing a possession style or sitting deep and hitting teams with fast counters as evident against City and Leeds this season.

“I like to control the games. I like to be responsible for our own destiny. If you are better than your opponent with the ball you have a 79 per cent chance of winning the game for me it is quite logical. It doesn’t matter how big or small you are if you don’t have the ball you can’t score.” (Rodgers 2012)

This season Rodgers has used a number of formations with the most used being the 4-2-3-1 covered here. Leicester started the season using a 3-4-2-1 mainly down to the injuries to key players like Ndidi, Pereira and Maddison. The style of play also shifted to that of a more counter-attacking side highlighted in their victories at Manchester City and Leeds.

Over the winter months, Leicester would move to the 4-2-3-1 system and play a style more akin to a Rodgers style. They used the 4-2-3-1 in 12 games winning 6, drawing 4 times and only losing twice.

Over the course of the season, Leicester has shown they are both comfortable rotating formations and implementing different styles from the compact midblock countering football against City which they only had 28.3% of the ball to the aggressive pressing and possession football against teams defending in a low block like WBA which they had 72.9% possession.

It is no surprise to find Leicester sitting in 3rd place of the league, they have shown great tactical flexibility which has allowed them to not only compete with the big 6 but to beat many of these teams. They are the 3rd best team for goals scored with 61, whilst maintaining a strong defensive base with 11 clean sheets with 17665 passes at an average of over 55% possession.

The video below shows in great depth the 4-2-3-1 tactic used by Rodgers and Leicester so check it out.