Search
FM Scout is the only community you can talk Football Manager in real time. Here are 10 reasons to join!
Home › Articles › Opinion › CM / FM Nostalgia ↓ 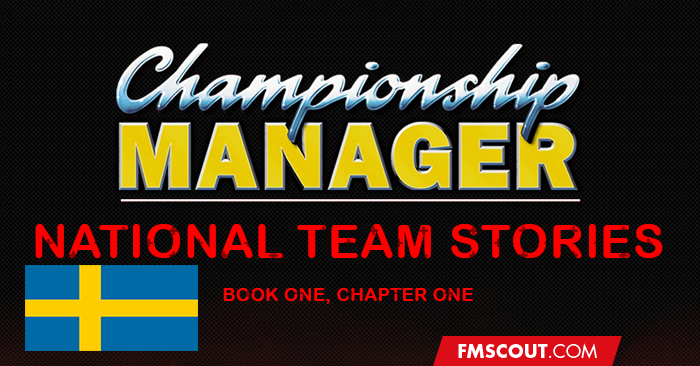 Sweden, lovely Sweden. The country that owns more islands than Man City do youngsters, the home of the Northern Lights as well as every married man’s nightmare, IKEA. But we’re not here to shop for flat-pack bed frames, oh no, we’re here to guide a youthful Swedish outfit through the upcoming Euros.

This is my first episode of what I’ve had planned for so long with this nostalgia column. Using the latest database constructed by the folks at champman0102.co.uk, I will use Championship Manager 01-02 to rise to the top of international football across multiple chapters and multiple teams. We’ll start in Scandinavia in Sweden, with the help of our very own international football expert, National Team Football.

In real life, this week’s win against the Rhode Islands will see the Swedes coast into the competition, despite their main stadium, Friends Arena, being knocked back by UEFA. Scoring a total of 23 goals across all 10 games and conceding only 9, things are really looking up for the Swedes to make a run next year, similar to the World Cup in Russia, where they were bitterly knocked out at the last minute by a seemingly pathetic Germany.

Looking at the squad, goalkeeper Robin Olsen seems he will do a job for us. A starter for most teams outside of the top 6 in Italy, he’s currently out on loan with Radja Nainggolan at Cagliari, conceding 14 from 11 starts. His most impressive achievements this season were helping his side to a clean sheet against giants Napoli and Atalanta (both away from home), and helping them to a 1-1 draw in the nation’s capital against his parent club Roma. At 29, the Malmo born stopper is the ideal choice to stand between the sticks. I mean, Cagliari are currently in 4th without the services of Nicolo Barella. What does that tell you? 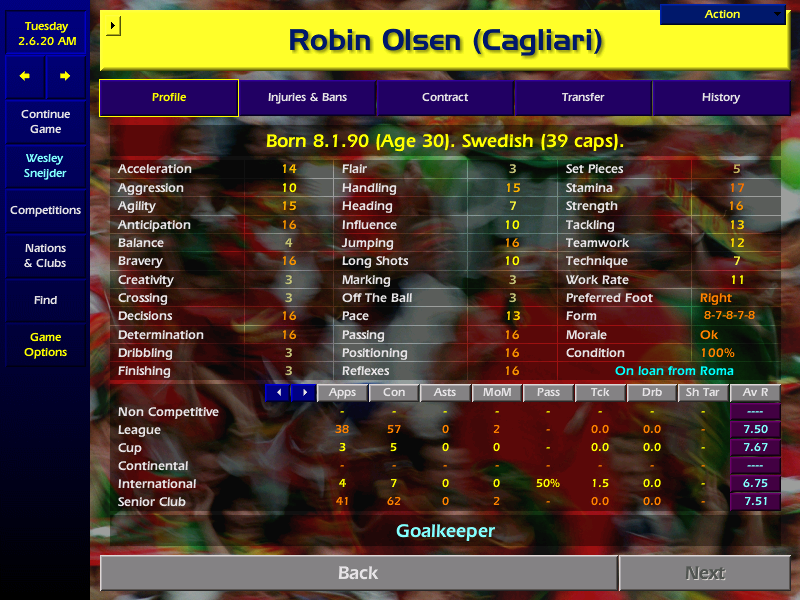 As for our fullbacks, it was of hot debate as to whether or not I would play with 4 at the back. Initially, I thought a defensive combination of Granqvist, Lindelof and Helander would suit well, but Granqvist’s age is looking to be getting the better of him. Despite his age, he’ll have to do, as his form far exceeds that of any right-back option we have in-game.

The most obvious player here when you think of Sweden is Victor Lindelof. A central defender with huge potential, he’s struggling to hold a first-team spot at the Red Devils due to competition with Ivorian Eric Bailly. Beginning his career in the depths of Sweden, he eventually entered Benfica’s long list of prospects. Bursting onto the senior team’s books at just 17, he made 48 appearances across 4 years in Lisbon, before he earned a big-money move to Manchester United, with the Red Devils forking out 35m + up to 10m in add-ons, making him a very expensive defender. In September 2019, he resigned with the Reds until 2024, making his risky stay in Manchester a longer one. He has to hope Chris Smalling will eventually get unloaded permanently, with the Englishmen on loan at Roma. Phil Jones and Axel Tuanzebe his main opponents for a starting role beside Harry Maguire. That said, he’s started 11 times this season, so perhaps that resigning is a sign of things to come. As for us, he’s a quality defender and a must-start for Sweden.
Andreas Granqvist is our next central defender. The long-time Swedish legend has appeared 88 times for his nation and has played in his home nation, Italy, Russia, the Netherlands and England. His height, strength and experience make him a very capable defender, despite his age.
Rangers’ Filip Helander is our final starter, and he’s a good one too. Of the same height as Granqvist but 6 years younger, Helander has graced us with 11 caps for Sweden at a senior level as well as stints in Italy with Bologna and Verona. Now in Scotland and performing very well, Helander is a very important member of this formidable defence. Lindelof has since moved on to West Ham (in-game) in search of first-team football. 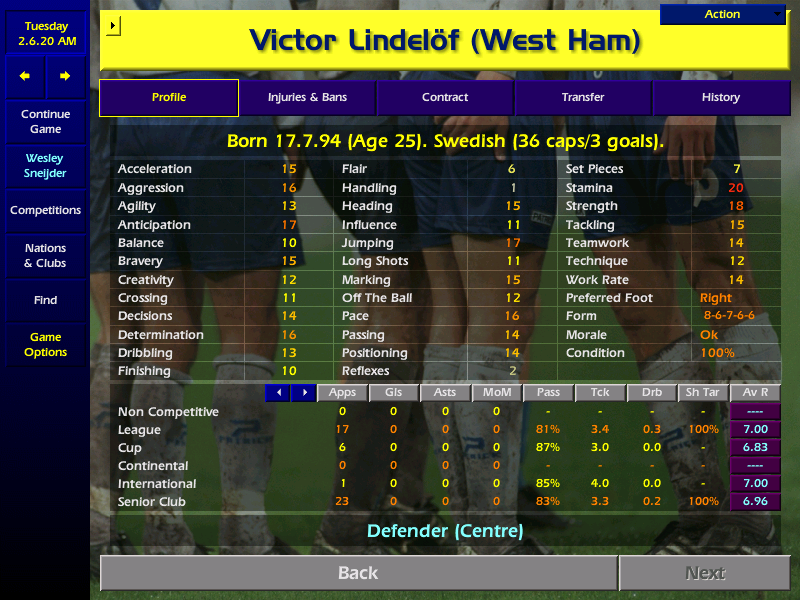 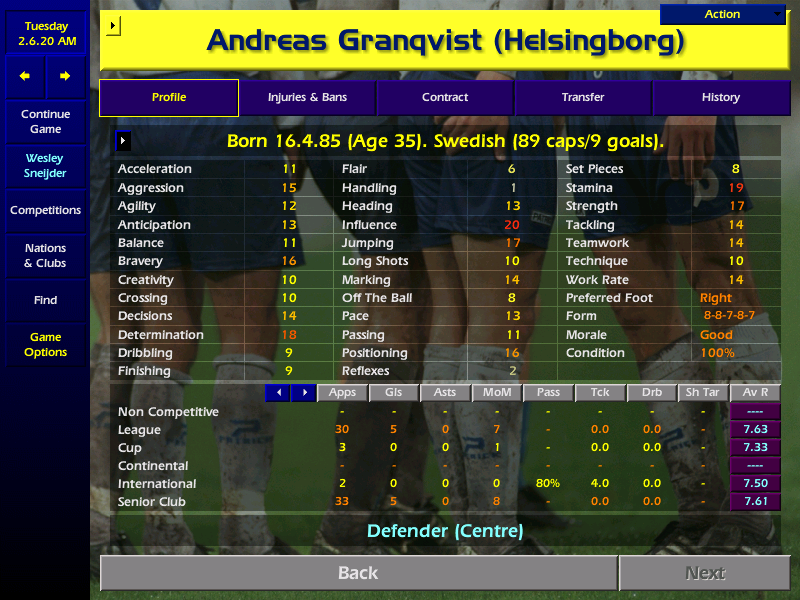 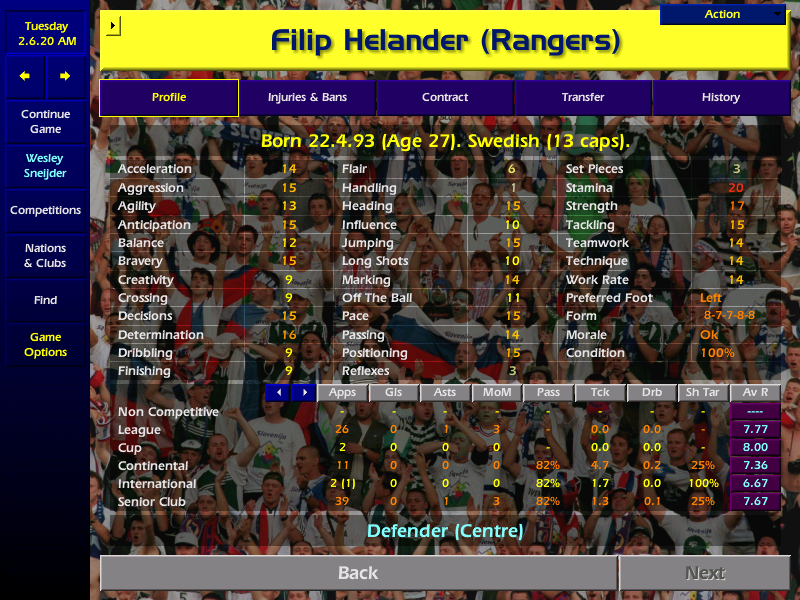 Our first of two defensive midfielders is Sampdoria’s Albin Ekdal. A no-nonsense defensive midfielder, he’s appeared 51 times for Sweden since 2011. A former Juventus player, he never met his potential there and has since had successful stints with 3 Italian clubs and 1 German club. Now a starter for Samp, he’s hard to ignore. 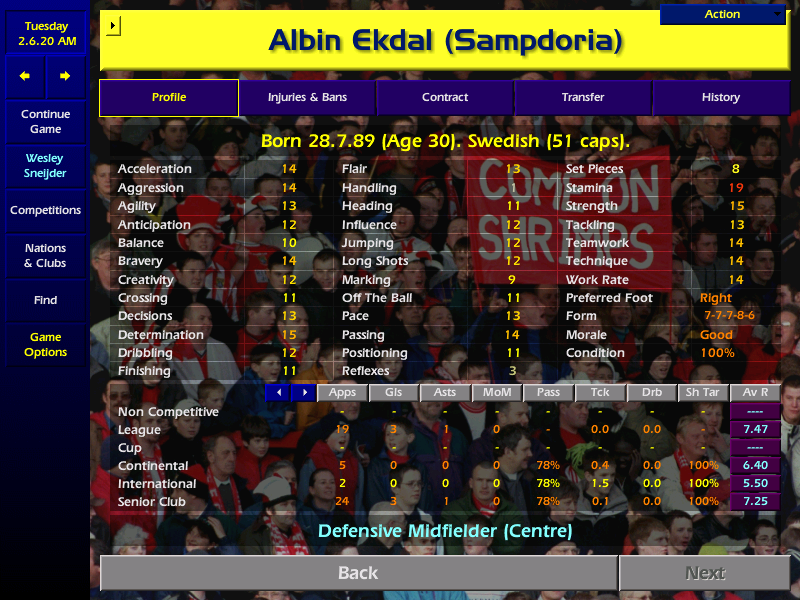 Picked up by Krasnodar on a free this season, Kristoffer Olsson is our other starting central midfielder. With great technical skills on the ball, he’ll aim to push further up the field to aid in the attack. The 24-year-old is a 15 time capped international and looks to be an obvious choice given his form in Sweden. 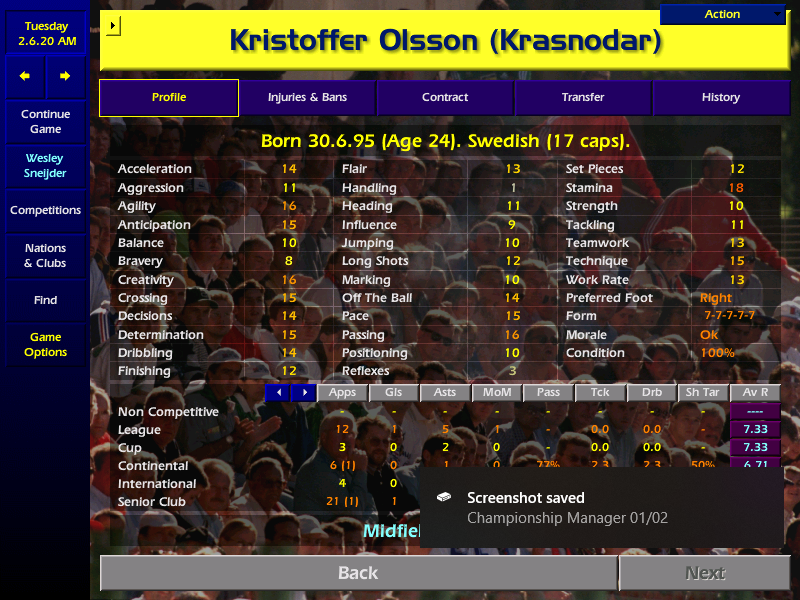 Out on the right plays our first youngster, Dejan Kulusevski. An Atalanta prospect on loan at Parma Calcio, he currently (at the time of writing this) is the leader in assists in the Serie A. Pretty impressive, given he’s only 19. He’ll do a great job, we just have to monitor how he recovers from an injury layoff. 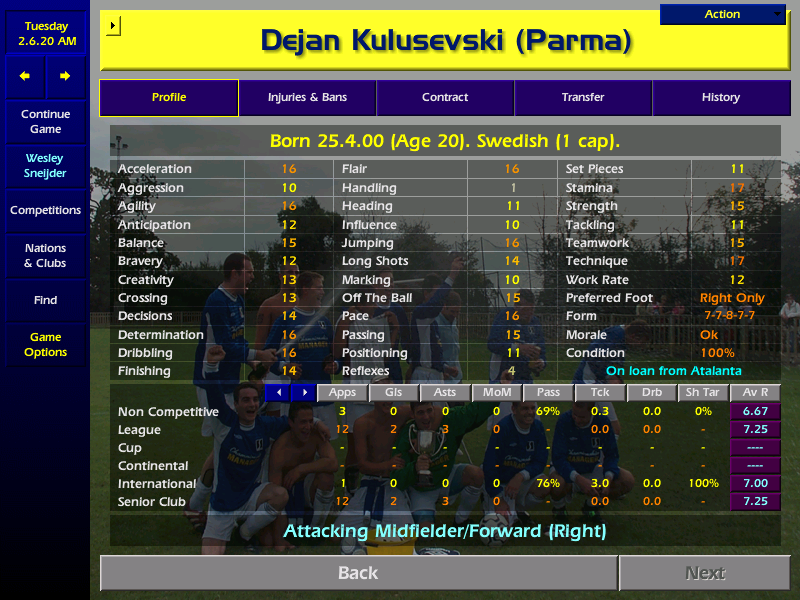 The left side was a bit tricky, as multiple names were coming into consideration but I kept coming back to a left-back. Ludwig Augustinsson is listed as a key player by the games engine, so I figured he’d have to make do at left midfield. His stats suit, and he has left midfield as a key position. He’ll start should he play well for the rest of the season at Werder Bremen. Also apparently he's a set-piece taker, so that's a nice bonus. 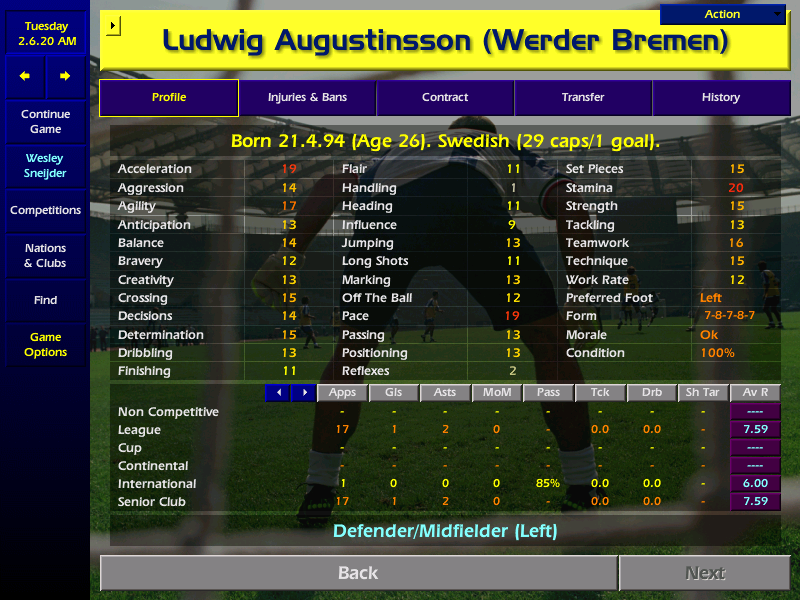 Now onto the attacking midfield, and our best player Emil Forsberg will line up with youngster Daleho Irandust but more likely Robin Quaison. Currently a key member of Mainz, the versatile attacker has played 71 appearances in Germany and a slightly disappointing 15 national team appearances since 2013. Nonetheless, he will push up further into a striker position when we’re on the ball and will drop back to a central midfield position when off the ball. 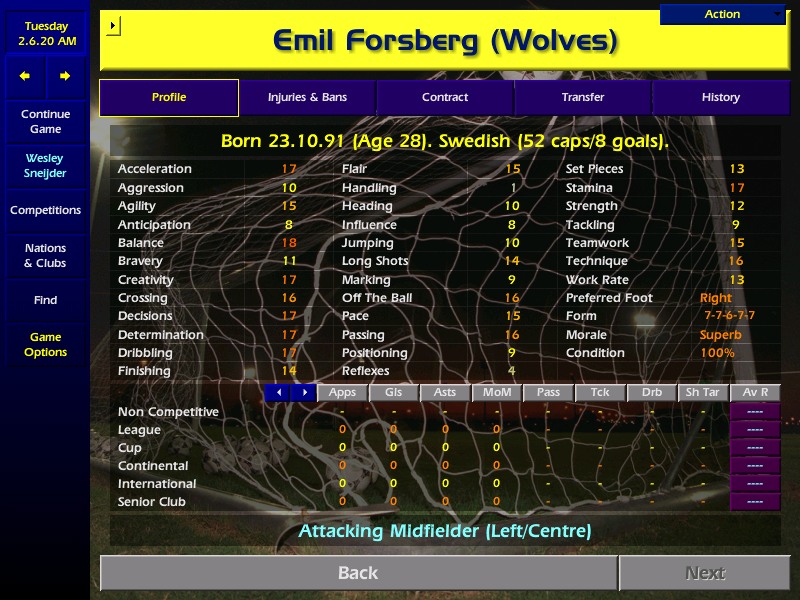 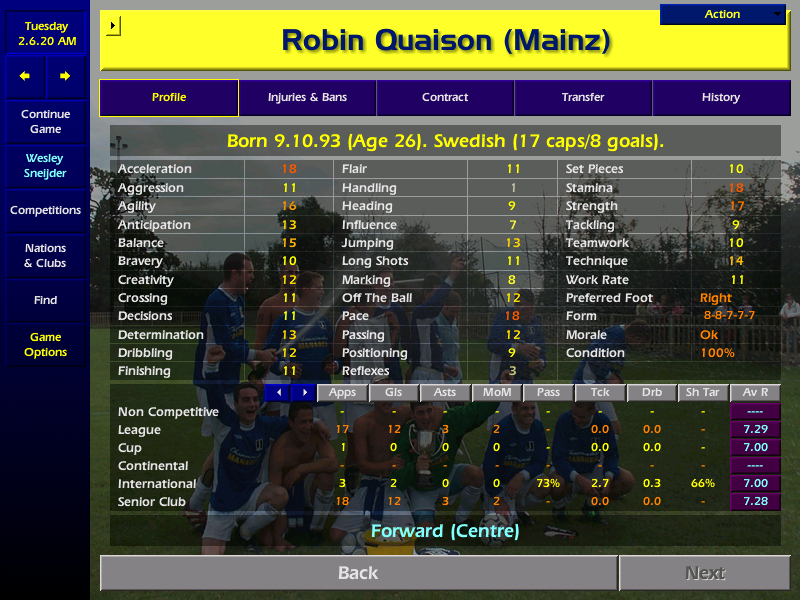 But who’s going to lead the line? Marcus Berg looks a bit past it, and I don’t feel like testing my fortunes with a Man City reject with a current goal-scoring record a defender would be proud of. It has to be Guidetti’s league mate and Zlatan’s successor, Alexander Isak.
The 21-year-old Borussia Dortmund product has had a magnificent spell with Real Sociedad, finishing runner-up in the league’s golden boot award. The tall, quick, lanky complete forward shows heaps of potential and is an obvious starter over any other Swedish striker. It’s not sustainable however, as the next best thing is to move Quaison further up as we have some strong options in the midfield. 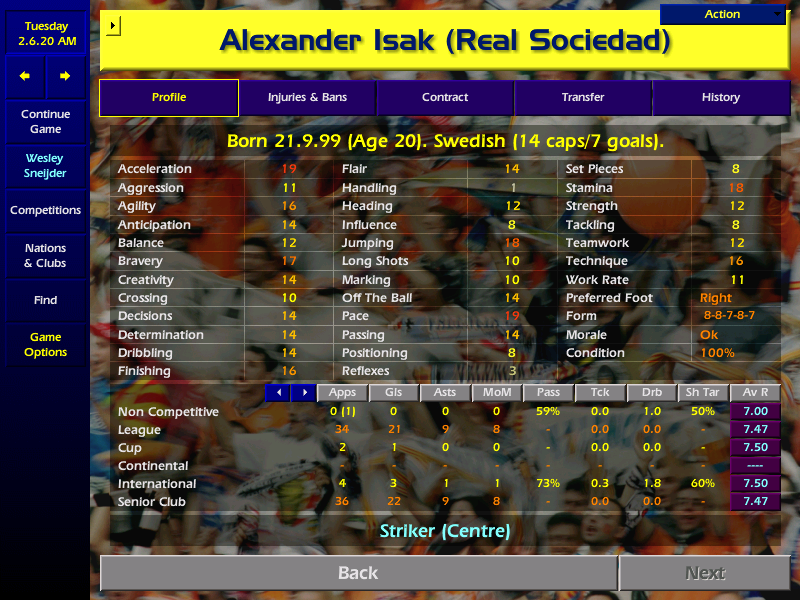 Here is the squad; 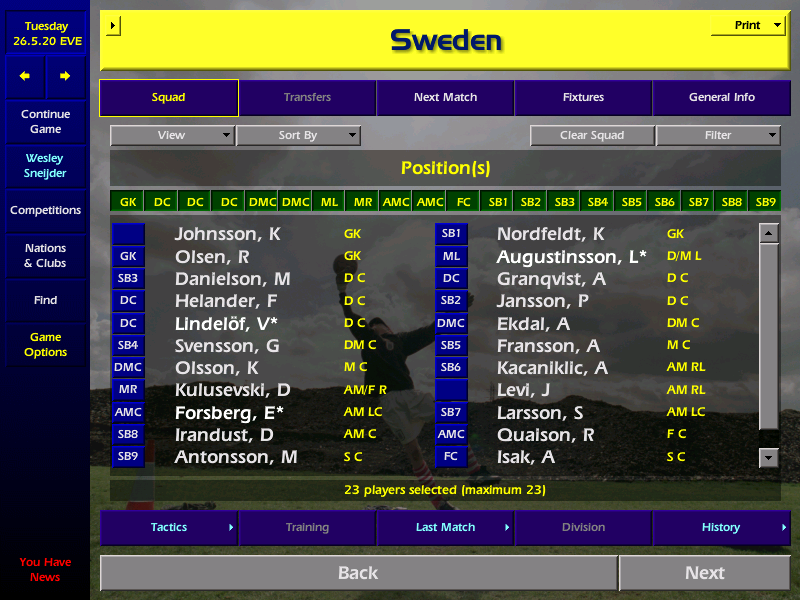 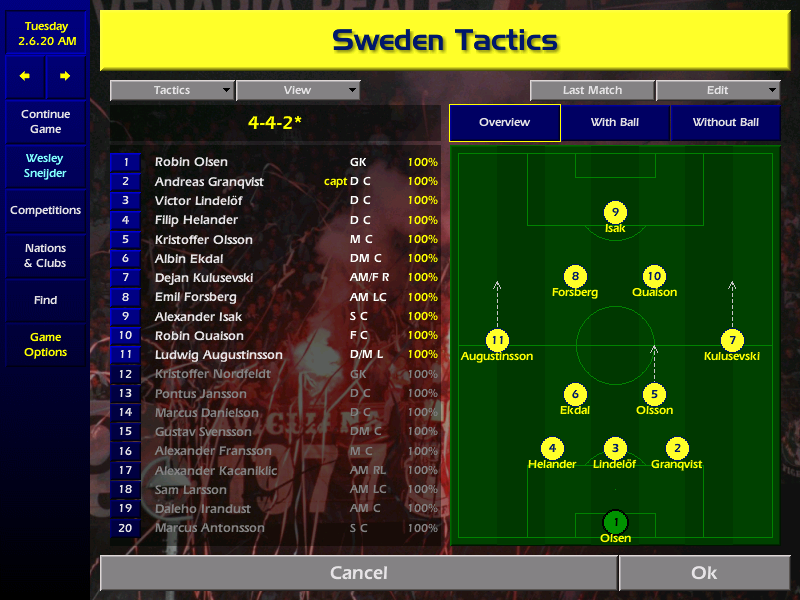 You’ll have noticed that the squads are updated from the originals, and I do plan to do something like this with the original rosters, but the main point here is to see how a retro game predicts the Euro 2020 competition next June. Can it accurately predict the winner? How far will we go?

Thank you for reading the first instalment in National Team Stories. I would like to thank National Team Football for his invaluable expertise, his knowledge has brought this idea and lineup choice to being. Check out his YouTube here for quality content every month.
Travel safe FMScout community!

With that said, here's what went down in our friendly versus Croatia. 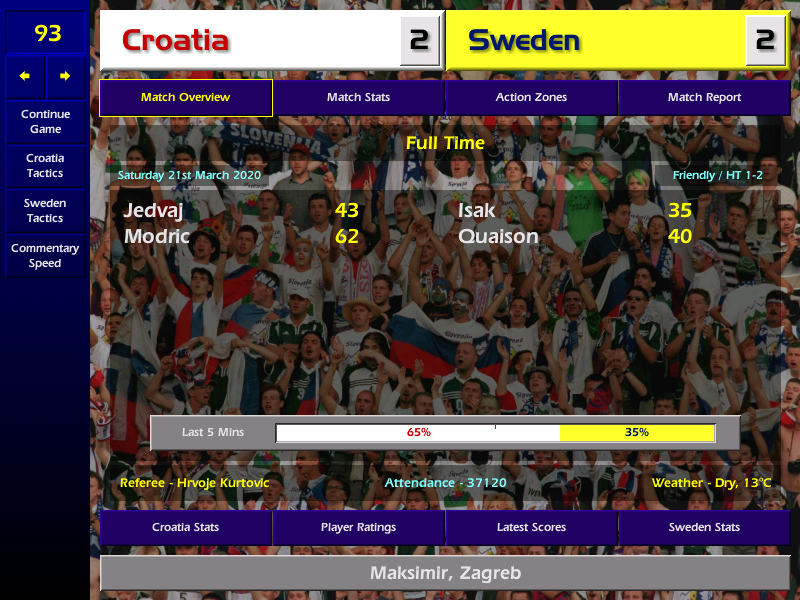 And here's the group we've been put in. 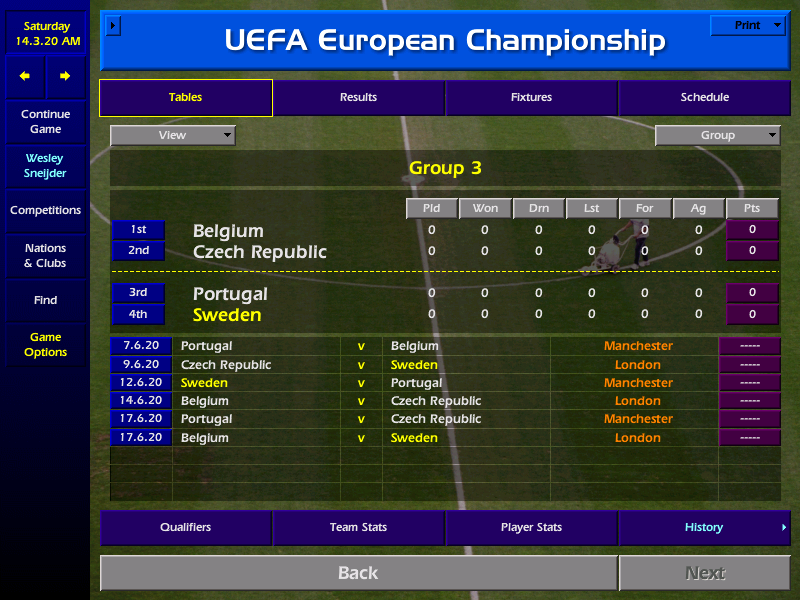