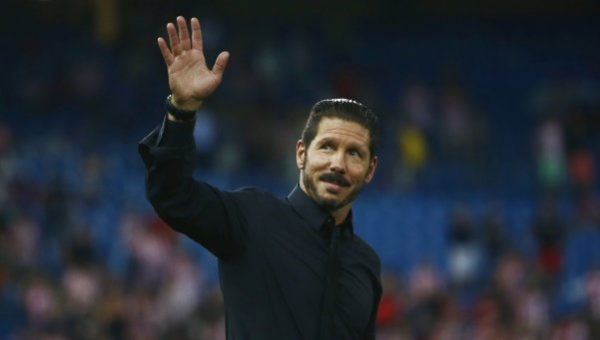 Diego Simeone resigns as manager of Atletico Madrid after two and a half seasons.
The move comes at a surprising time and left the supporters shocked as the Argentinian experienced his most successful season as a manager ever, leading his side to two astonishing achievements - a spot in Champions League final but a loss to their local rivals, Real Madrid, denied Gabi from lifting the prestigious trophy however his side triumphed over Real Madrid and Barcelona in the race for the La Liga trophy and won the club's first championship since the double season in 1995/1996 when Simeone was a player in a team guided by the Serbian club's icon, Radomir Antic.


The 41-year-old former Argentina and Atletico Madrid captain transformed Los Colchoneros into an aggressive, committed and quick on the break which he pledged to execute, once he took the reins off his predecessor, Gregorio Manzano in 2011.
The club enjoyed an almost three-years spell with Cholo on the sidelines, winning a UEFA Europa League, a UEFA Supercup, a Copa del Rey and a spectacular La Liga championship respectively.

Atletico has lost four key players this summer who had played a big role in the team's great campaign last year as Thibaut Courtois finished his time on a loan and moved back to Chelsea along with Diego Costa and Filipe Luis who joined the Premier League side as well for a combined fee of £47.8M. The fourth player was Spain's all-time top goalscorer, David Villa, whose contract expired and he left for New York City from the Major League Soccer.

Simeone had his replacements for each player who departed from the team during the summer. Benfica's Slovenian goalkeeper, Jan Oblak, took over Courtois' spot between the posts for a reported fee of €17M and Guilherme Siqueira left Estadio da Luz with Oblak for a confirmed fee of €10.5M.
Alessio Cerci topped Seria A's 2013/2014 top assists list and attracted the attention of Diego Simeone who landed the Italian winger in Vicente Calderon for €16.5M but according to Simeone, he is a long term signing thus he was loaned to A.C Milan to further his development.

The last two signings were the biggest transfers of Atletico Madrid in this transfer window, Antoine Griezmann linked up with capital city side from his childhood club, Real Sociedad for a €31.5M. The other signing and arguably Atletico's biggest buy is the prolific Croatian striker of Bayern Munich, Mario Mandzukic, for a price of €23M.
However the return of Vicente Calderon's legend and a player who was crowned to a king by many fans, Fernando Torres, beat both last signings despite coming on a season-long loan. El Nino drew 45,000 enthusiastic fans to the home stadium, Vicente Calderon when his unveiling occured to witness the moment they had wished for, ever since he left in 2007.

The future around Vicente Calderon is unclear and foggy at the moment as the managerial post is left vacant however it is reported the club's chairman, Enrique Cerezo, is having talks with some managers to replace the Argentinian.
According to a source, Cerezo will unveil Diego Simeone's successor in the up-coming week in a press conference.

A large question mark is hanging around Vicente Calderon about Los Colchoneros' next manager, there is many rumors and speculations about the identity to fill in Simeone's place and according to sources, Atletico's board have a list of managers they're negotiating with at this moment but it is not known yet who it will be.
The list was compiled by Enrique Cerezo and Jose Luis Caminero and it includes Atletico's former manager who a short spell in the club, Claudio Ranieri.
Radomir Antic who managed the club in a double season back in 1995/1996 has made it into the list. The third candidate is an ex-Atletico player who had managed four La Liga teams, most recently was Malaga and it is Bernd Schuster.

It has been reported that Caminero reached out to Rafa Benitez on behalf of Atletico's chairman, Enrique Cerezo but the Spaniard denied the opportunity to manage La Liga champions. Rafa Benitez has released a statement to the press following the reports of him being linked to Atletico Madrid:


"It is true Atletico negotiated with me for the managerial post at Vicente Calderon but I will not take the opportunity as I'm under a contract in Napoli for the next season, I want to stay committed and loyal to Valencia as well."


Next update
1
Login to Quote