The Riverside Stadium, home to Middlesbrough. Who will take over as manager?
Since Aitor Karanka’s recent and, let’s face it, quite awkward contract termination, there have been a lot of questions on Boro fans’ minds. Who will take over? Will they re-sign Patrick Bamford? Is their club “no f***** good”?

Here, we are aiming to answer one of those questions by providing fans with ten possible candidates to replace Karanka at The Riverside Stadium. Not all of them are the most realistic choices, but these are the ten most likely, according to various betting sites. 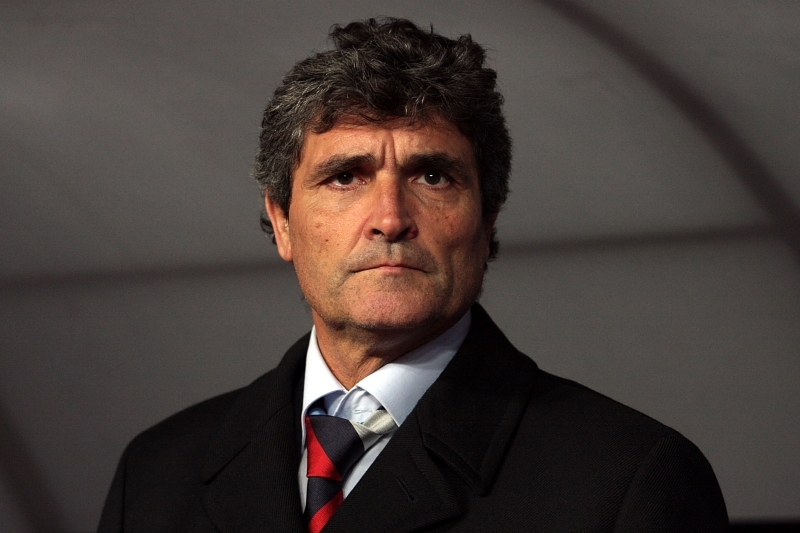 Juande Ramos, pictured after he heard Daniel Levy wanted to speak to him.
Ah yes, Juande Ramos. That man who managed Spurs for about a week before hibernating in the footballing abyss. Actually, that’s not true at all. Since leaving Tottenham, he has managed Real Madrid, CSKA Moscow and Dnipro Dnipropetrovsk. Before that, however, he managed more teams than you’ve had hot dinners - including Sevilla, Espanyol, Betis and a bunch of other Spanish teams that you’ll forget the names of while reading about John Carver later.

He has won various competitions and trophies - most notably the Europa League with Sevilla. Coincidentally, that match was against Middlesbrough. Now, nobody is saying that experience isn’t important. However, Ramos is now 60 years-old and has managed fifteen clubs. He has spent four years at Dnipro, and that is his record. He spent a pathetic 47 days at CSKA Moscow, which can prove how godawful he can be as a manager. Is he worth the risk?

http://e2.365dm.com/13/08/800x600/mark-schwarzer-chelsea-thailand_2990658.jpg
Mark Schwarzer, AFTER he sold his soul to the devil to become a Chelsea player.
While not retired yet, Mark Schwarzer is about 100 years old now and it’s about time he began to consider hanging up his boots and hopping into his mobility scooter. However, he could go into management right now, and with his old club Middlesbrough in need of some new blood, it could be a perfect time before he becomes completely fossilised. Of course, he may not want to go into management, but this would be the greatest time to do so.

Given the fact that he’s older than the Sun, he has played for eight different clubs and is considered a ‘hero’ and a ‘veteran’ at every single one of them. Even though he only played 4 games for Kaiserslautern and 2 for Dynamo Dresden. Still, I believe that, given the right advice within the first few months (you know how the elderly can get quite confused), he could be a big success at Middlesbrough. Unlikely, but possible.

http://i.telegraph.co.uk/multimedia/archive/02775/malky-mackay_2775743b.jpg
There’s good old Malky again, showing us how much he hates the Jews.
Mackay’s run of three consecutive promotions as a player could come in handy with Middlesbrough, as it’s what the fans will be expecting this season. Having just been sacked from Wigan Athletic, however, the board at Boro may not be willing to take on a reject from the club who flirted with relegation from the Premier League for about a decade, then decided to fall apart completely but still didn’t want Malky Mackay.

Of course, you can’t write about Malky Mackay and not talk about his encounters with the madman Vincent Tan and the racist comments as Cardiff manager. Still, Mackay did a good job as Cardiff manager until Vincent Tan decided to not take his meds one day and blame him for the goalkeepers not scoring enough, before eventually basically sacking him for little or no reason and ruining Mackay’s career. Still better than Karanka in the past few days.

http://www.tz.de/bilder/2013/12/22/3283977/1066267822-augsburg-markus-weinzierl-4z4InBDMef.jpg
Who?
Dear lord I hope this guy isn’t Middlesbrough manager. His name is so bloody hard to spell and I know so little about him there’s not much I can say about him as a person. Compared to Malky Mackay, who is a comedy goldmine, Weinzierl is a rather standard person, which is by no means a bad thing. Especially after the Karanka events. He’s not very well known, but seems to be doing a very good job with Augsburg.

Having taken the SSV Jahn Regensburg job in 2008 and working there for 4 years, Wikipedia says literally nothing about his reign there, but he did join Augsburg in 2012. He took them to 5th in the Bundesliga last season, and has beaten Bayern Munich twice. Not too shabby for a manager I had no idea existed until this afternoon. He has recently signed a new contract keeping him at Augsburg until 2019, so this may end up putting Middlesbrough off.

http://du8znpjowa92.cloudfront.net/wp-content/uploads/2014/02/MichaelLaudrup.jpg
And there’s Michael Laudrup.
Michael Laudrup? At Middlesbrough? Really? Have I gone mad? Well, since leaving Swansea with less of a bang than a nun’s bedroom, Laudrup has gone to manage Qatari side Lekhwiya. He then realised that eventually he would be sold to Sepp Blatter if he stayed, so he decided to leave. He got them some trophies, though. So Qatar could sell them instead.

His football style is attractive, which will be pleasing to the Middlesbrough chairman, he won a trophy with Swansea, he won trophies with Lekhwiya, he won trophies with Brondby, he did some other stuff with Mallora and Getafe. Spain just isn’t his thing. Still, I think he’d be a perfect choice to follow Karanka - he’s still a rather young manager., so retirement isn’t a worry either.

http://static.guim.co.uk/sys-images/Sport/Pix/pictures/2015/3/19/1426801476388/John-Carver-009.jpg
That’s John Carver. Don’t look into his eyes, you’ll turn to stone.
Middlesbrough fans better hope these rumours are fake, because John Carver will enter the Riverside Stadium doors like a furious wrecking ball and destroy everything in his path. Reversing every positive movement the club has made in the last century and hypnotising Steve Gibson into keep him there for eternity. As interim manager of Newcastle United, he took them from bumbling around mid table to needing a miracle win against West Ham to even stay in the Premier League, which they did because Carver is a master of destruction on one hand, but he needed to keep his power.

Imagine what he would do in a whole season. With transfer windows. He’d be creating a team filled with Adebayo Akinfenwa, Emile Heskey, Nicklas Bendtner, bringing David Bentley back from retirement with his creepy voodoo powers and assembling a team of black cats to face oppositions. Best coach in the Premier League indeed. How the hell he became favourite for the job is beyond human logic. I’ll just blame it on his supernatural horrendous villainous nature.

http://static.guim.co.uk/sys-images/Guardian/Pix/pictures/2013/10/9/1381334575401/Gus-Poyet-014.jpg
Gus looks rather terrified, to be honest. Almost as if he’s working with John Carver.
Gus Poyet, the hero of Brighton. Until he was awkwardly sacked on Match of the Day. Ahem. Still. he managed Sunderland, the easiest club you could possibly manage if you want to beat your rivals. I can only assume he left because the demon John Carver was inducted into Sunderland’s Hall of Fame, but I’m sure none of that’ll happen if he joins Middlesbrough.

He’s played for Chelsea, Spurs and River Plate, and managed Brighton and Sunderland. He’s experienced with football, but at the age where he can be versatile and adapt Middlesbrough however he likes. He would be a good successor for Karanka, simply because he’s 46 and doesn’t usually rant about how his club is “no f****** good” or insult a club in trouble. Although, neither did Karanka. Look what happened there.

http://i.telegraph.co.uk/multimedia/archive/02406/harry-redknapp_2406074b.jpg
”Austin can’t leave now…” Harry says, licking his lips.
A true veteran of the mid-table Premier League/Championship world, Harry Redknapp is fresh from a resignation from Queens Park Rangers, because let’s face it, who wants to manage QPR for longer than a couple of years? Only a soldier can deal with the shenanigans of Manchester City Gone Wrong. He’s been involved in the footballing business since the 1960s. That is real dedication to your job. His son’s on A League of Their Own, too. That’s what really matters here.

Having managed clubs like Bournemouth, Portsmouth, Southampton, Tottenham, West Ham and QPR, ‘Arry knows what it’s like to battle for promotion and to battle against relegation. The experience would come in handy with a club like Middlesbrough. The question is if he’s ready to take on such a job after his knee operation, the reason he left QPR in the first place? If he truly isn’t, perhaps there are other, better options for Boro.

http://static.guim.co.uk/sys-images/Sport/Pix/pictures/2015/2/11/1423685985783/Soccer---Paul-Lambert-009.jpg
Paul Lambert - the symbol for footballing mediocrity.
Oh, Paul Lambert. The typical manager who does extremely well with one club at some point, which gathers the attention of several slightly bigger clubs before eventually slinking into obscurity. At some point, Roy Hodgson will do the same. Lambert has managed Norwich City and Aston Villa. Oh, is that not all? Right. He also managed Colchester United, Wycombe Wanderers and Livingston. Basically, Lambert’s managerial history is the same as the ‘British Clubs I Hate’ list I keep in my bedroom and kiss every night.

Sure, he’s won successive promotions with Norwich. Hello, it’s Norwich. It’s not like he’s taken Vauxhall Motors to the Premier League and managed to beat Arsenal 11-0, right? Heh, like that’d ever happen. He was a mediocre manager at Villa at best, and any old footballer in need of money can do averagely well with Wycombe. Severely overrated, there are certainly many better options.

http://talksport.com/sites/default/files/field/image/201405/mark-warburton.jpg
So he’s just joined Rangers… he was obviously possessed by one John Carver.
People seem to think that Mark Warburton is going to jump away from Glasgow, roll down Ben Nevis and fly away from his brand new job at Rangers just to join Middlesbrough. He has only just joined the Scottish team, what makes anyone think that he’s going to ditch it for a second go at the Championship? He won a certain place in an awards ceremony and he moved on. Deal with it, Boro fans. He’s not going to leave.

That said, he would be an excellent Middlesbrough manager. He proved himself last season with Brentford, taking them to the play-offs after just being promoted. Imagine what he’d do with a team that just needs a little push towards Premier League stardom. Not that Brentford are incapable, of course. Middlesbrough would be set for promotion this season if Warburton was to take over this season. Not that it will happen.