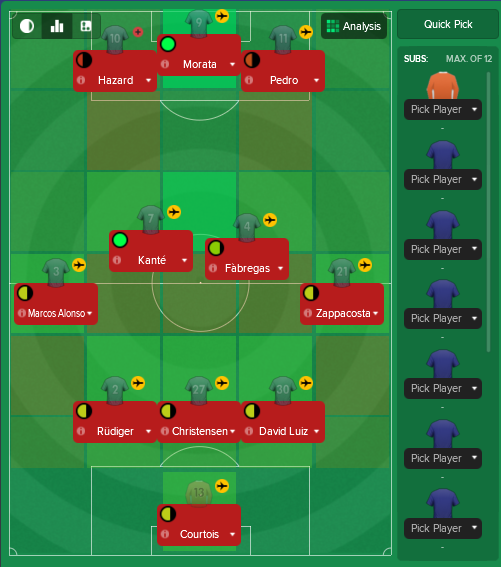 This year I have gone with a system that sees 3 at the back and 3 out and out strikers. What this means is we are going to be heavily reliant on the 2 central midfielders for our transitional play as well as the wing backs who are going to have to be tireless in running the line. As far as the fullbacks go I will need players that have high attributes in work rate, acceleration, tackling and crossing. 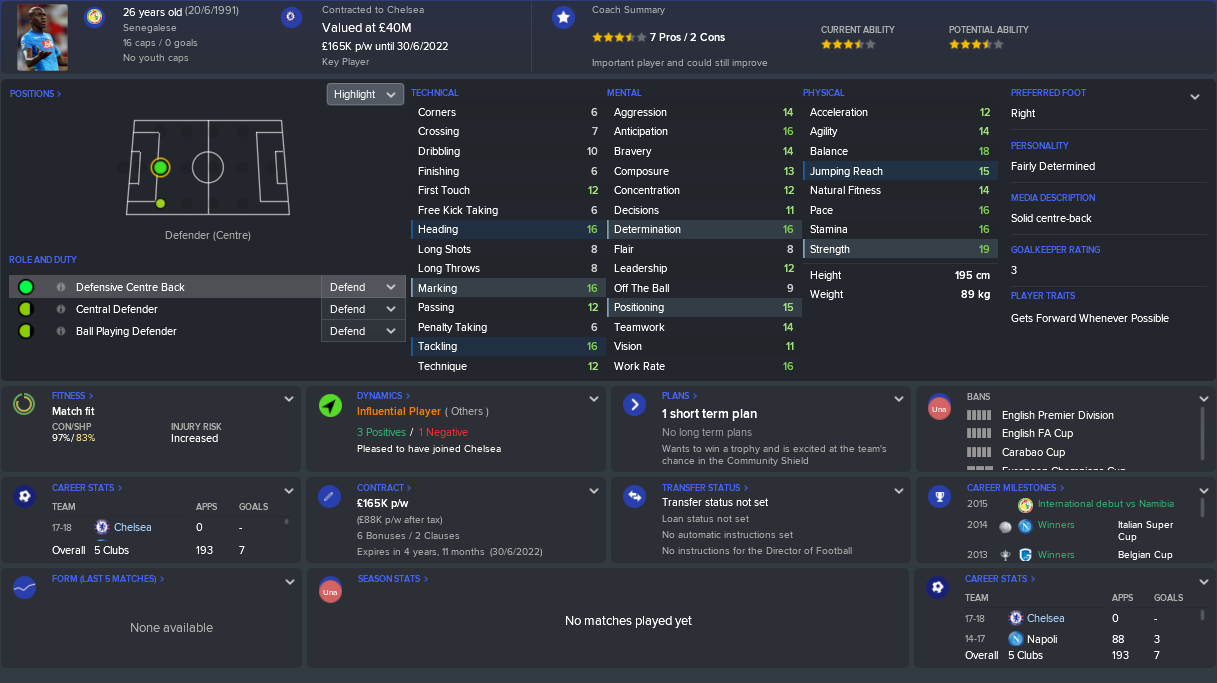 Although I was not looking at spending on big players after having a good look at the squad I decided a centre back was a must as I want to build a team starting this year. So the reason I decided on Koulibaly was I think he will be the ideal replacement for Cahill who I think is past it and will leave us with David Luiz as 4th choice CB. Also being just 26 we should get 4 good years out of him and by then Christensen and Zouma should be peaking too. 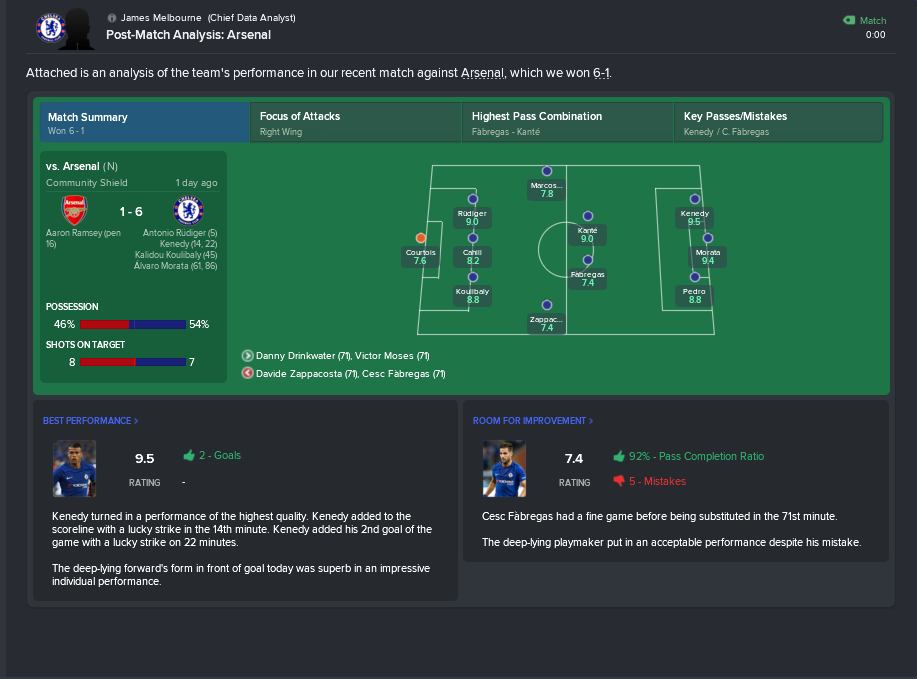 After a really good preseason I finally got my chance to try my hand in a competitive game in the seasons traditional curtain raiser in the Community Shield. We played Arsenal who set up in a 3-4-3 formation similar to ours except they were using a wide front 3. The game was an absolute thriller in which we took full advantage of some terrible play from Arsenal and hit them for 6. Morata marked his debut with a brace, also marking their debuts with goals were defenders Koulibaly and Rudiger with one each. Kenedy in for the injured Hazard also managed to take full advantage by grabbing a couple himself.

We received a bitter blow during the Man City game when Morata fell to injury after starting so well for us bagging goals and a great average rating. The one positive to take from the situation is we can use the under utilised Batshuayi in his place you never know it could be a blessing. Lucky for us the 4 week lay off also tied in with the international break so he only missed 2 games. 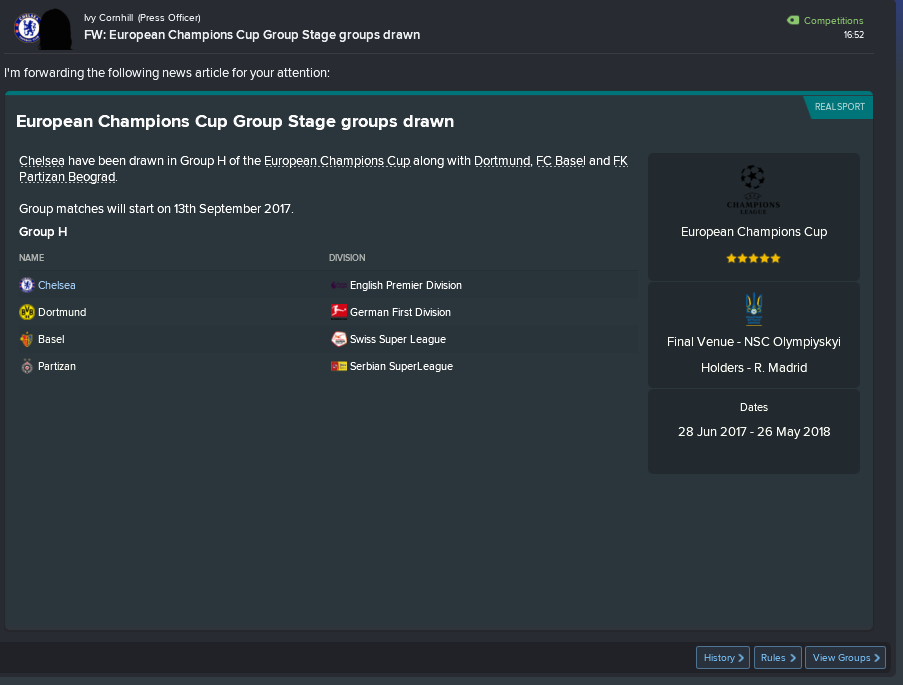 As we all know a good draw in the Champions League can be crucial to a good season and with the group we have been handed I can’t grumble. Yes it’s not the easiest group we could face and yes there is a strong Dortmund side in the mix but I can only feel anything less than 1st would be unacceptable. As far as the other 2 we have been drawn with I can’t see to many problems maybe the one thing we will have to be wary of is the away game to Basel as they seem to have a good history against English sides. 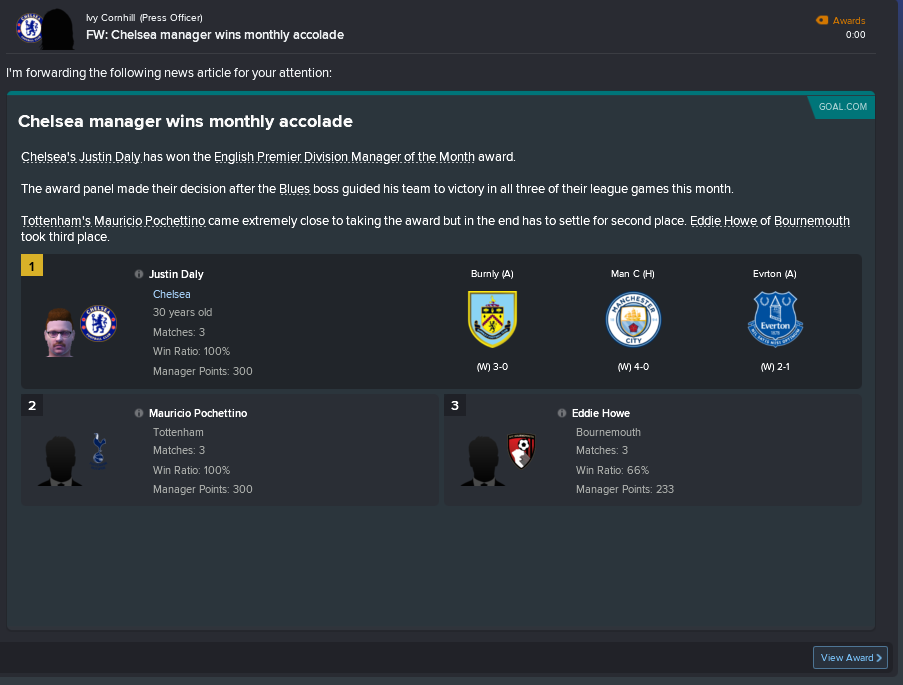 Well after what was an incredible start to the season winning our first 3 prem games I have been rewarded with a manager of the month award, what a way to start my career. 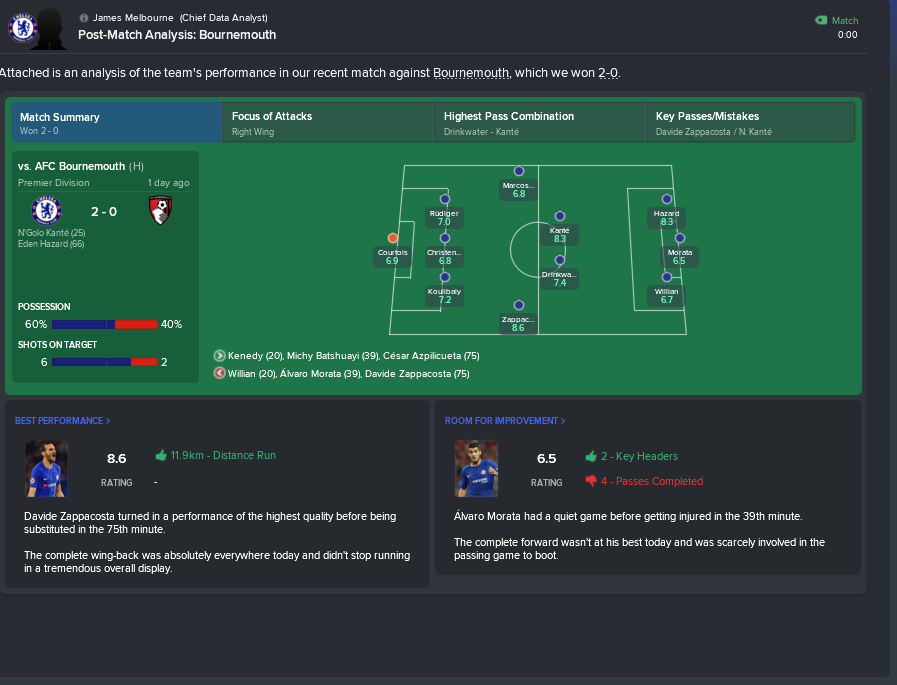 After picking up just 2 wins in 7 games something was going to have to change so I decided to do some tweaking with the tactics which seemed to work a treat. In what was a crucial game we finally managed to turn out the result that was needed a 2-0 victory which on reflection could have been a whole lot better. There was a negative to this victory and that was the injury that Willian sustained.

As I just made reference too Willian did indeed pick up an injury against Bournemouth and after closer inspection by our medical team it turns out is worse than first fearedas Willian has suffered Damaged Cruciate Ligaments which will see him out anywhere between 6 and 7 months which means he will likely miss the season.

After the game with WBA we had another casualty as Zappacosta sustained some Sprained Knee Ligaments that will keep him out for a month. I must admit I do feel rather unlucky with the injuries we are getting but I guess that’s football.

After being pretty much guaranteeing Qualification to the next stage of the Champions League I decided to give one of our youth prospects a chance so up stepped Trevoh Chalobah. Trevoh Chalobah is a central defender aged 18 with some very strong physical attributes with some good mentals too. As for his debut it went very well as we were able to obliterate Basel 5-0. 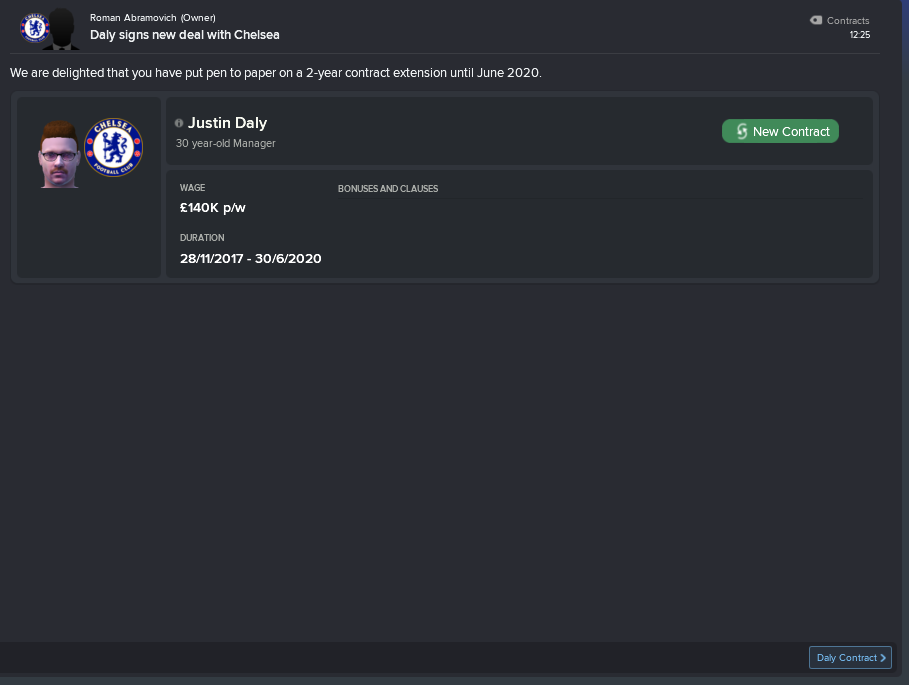 After a great start to my career at Chelsea I have already been offered my first contract extension which will see me here for at least 3 more years. I am delighted that the board have already recognised the effort I have put in and are buying in to what I am trying to do. 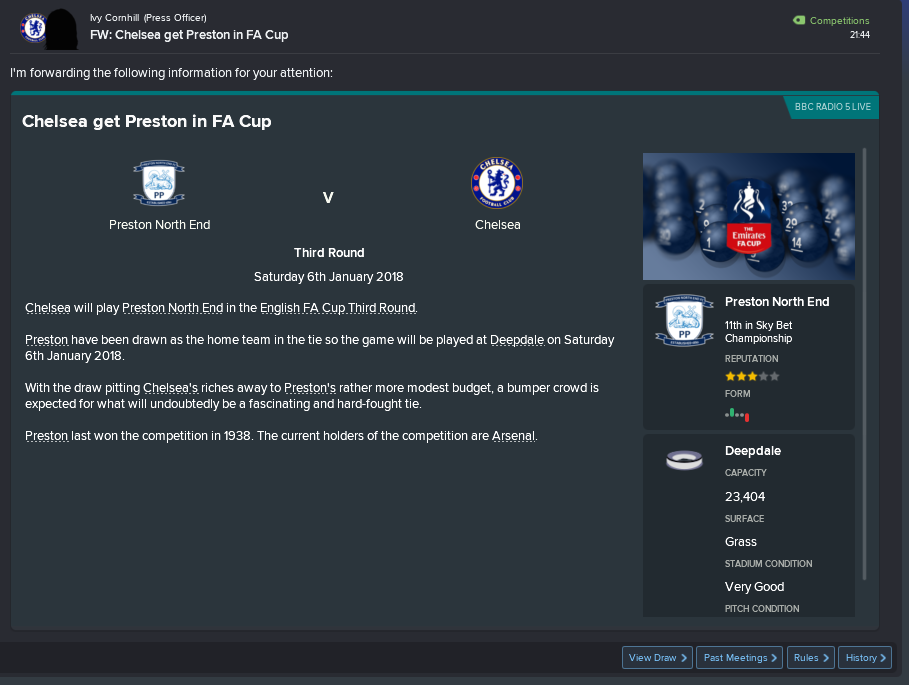 The day has come that all English teams look forward to, the FA Cup 3rd round draw. This year we got a away tie against Championship side Preston North End to be played on the 6th January. After going out of the Carabao cup in the early rounds I feel it’s important we go a long way in this cup competition. 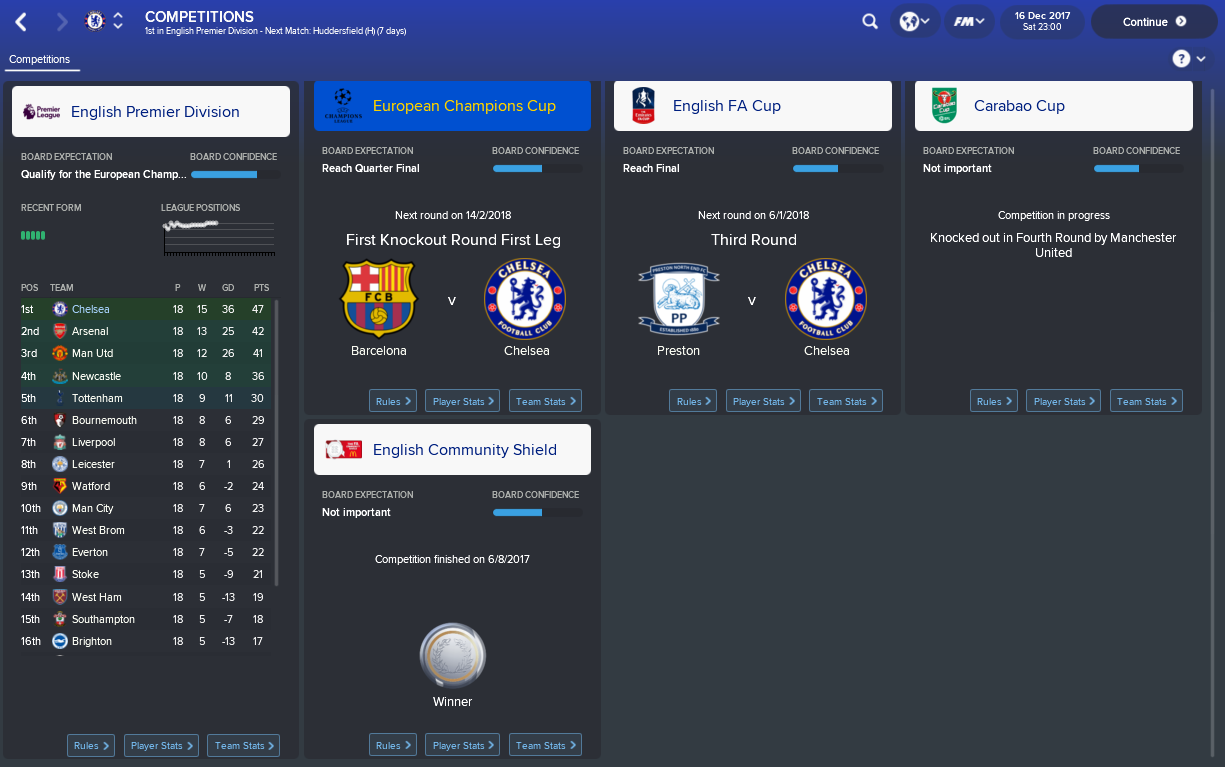 We had a great preseason with 4 wins in 5 games which have given me a good gauge on what we have amongst our players. As for our competitive games I have managed to get 13 played this week starting with the 6-1 charity shield win. From our first 4 Premier League games we took maximum points which inclued a battering of Manchester City with all four front players scoring on the day, we also played Liverpool after losing Morata to injury but it wasn’t enough to stop us as we had Batshuayi who bagged 2. Up next we traveled to Basil for our first Champions League game of the season where we got our first 3 points on the board with a difficult 2-0 victory, they were very tough to break down. Up next we played another 2 prem games with a Carabao cup game planted between which happens to be the most interesting game out of the 3. In this game we travelled to Wolves to see if we could progress to the next round. Luckily after fielding an extremely weakened side with just 3 first teamers starting we ran out 1-0 winners thanks to a 6th minute Musonda goal. The next test we faced was in the Champions League and it was also our first defeat as a manager. We ended up on the wrong end of a 3-0 whooping and I have to take all responsibility for it as we were just terrible on the night from start to finish and I just didn’t change anything. After defeat to Dortmund it was important we got back to winning ways but we suffered another defeat this time to Crystal Palace 0-1. After the next 3 games it looked like we may have got back on track with 2 wins and a draw but then we travelled to Old Trafford in the Carabao Cup and it fell apart again as we fell to a Lukaku goal. Since then we have gone on a run of 12 straight wins in all competition scoring 34 while conceding just 2.

My player of the week has to be Eden Hazard with 16 goals and 4 assists from just 19 starts says all it needs too.
1