Wenger: I’m Not Sure If Tammy Will Stay 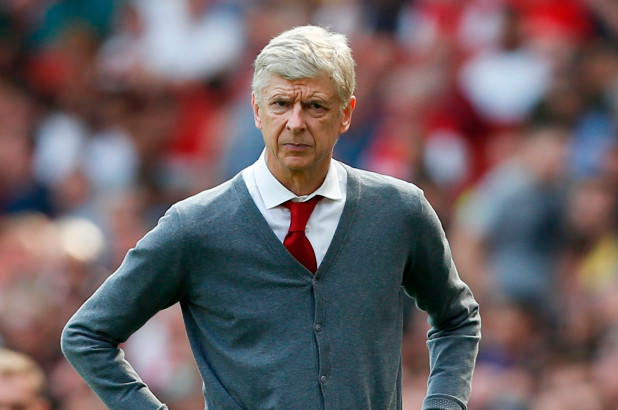 Who Is Tammy Abraham?

Tammy Abraham has been absolutely immense since the start of the season for Aston Villa. Abraham arrived at Villa Park looking to make an impact after moving down a division to play football.

Abraham, an academy graduate of Chelsea, Abraham made his senior debut for the club in 2016 before enjoying loan spells with Championship club Bristol City and fellow Premier League team Swansea City. During his time with the former, he won the club's Player of the Season and Young Player of the Season awards, as well as being their top goalscorer. Formerly an England youth international, Abraham represented the nation from under-18 level, and featured at the 2017 UEFA European Under-21 Championship in Poland. He made his senior debut in November 2017.

The Englishman was signed by Chelsea at Under-8 level and showed promise from the day that he was signed. Abraham won the Uefa Youth League and the F.A Youth Cup in 2015 and 2016 respectively. Tammy Abraham pitched in with a return of eight goals in nine matches but it was not enough to win the golden boot as Roberto Nunez of Atletico Madrid won the golden boot.

Abraham went on to net the winning goal in the F.A Youth Cup final against Manchester City, winning him the man of the match award too. During the 2014-15 and 2015-16 season Abraham netted an incredible 74 goals in 98 games for the various Chelsea youth teams.

Abraham’s form caught the attention of the then interim Chelsea manager Guus Hiddink who invited him to train with the senior team at the end of the 2015-16 season. It was Hiddink that handed Abraham his senior Chelsea debut on 11th May 2016, bringing the youngster on in the 74th minute to replace Bertrand Traore. Abraham then came on a week later for his home debut against then Champions Leicester City.

On 5 August 2016, Abraham signed for Championship club Bristol City on a season-long loan from Chelsea. He made his debut for the club the following day, coming off the bench for fellow debutant Josh Brownhill to score City's first goal in a 2–1 come-from-behind win over Wigan Athletic, although the goal was later credited to Hörður Magnússon instead.

Abraham started in his second game and scored the only goal of the match in a 1–0 win over Wycombe Wanderers, helping Bristol City advance to the Second Round of the EFL Cup. The following week, on 13 August, he scored his first professional brace in a 2–1 victory over newly promoted Burton Albion, including the last-minute winner.[12] In September, Abraham scored his second brace against Sheffield Wednesday, although Bristol City ultimately lost 3–2. He scored a further two goals during the month which saw him named Championship Player of the Month for September. He was also awarded the EFL Young Player of the Month award for September.

On 31 January 2017, Abraham scored his 16th Championship goal in the 2–2 draw against Sheffield Wednesday, which saw him break the record of former Fulham striker Moussa Dembélé for the most goals scored by a teenager since the beginning of the Football League Championship era. Abraham ended the season with 23 goals to his name, second only to Chris Wood of Leeds United, as City completed the campaign in 17th position, thereby avoiding relegation.[17] His performances throughout the season also earned him Bristol City's Player of the Year, Young Player of the Year and Top Goalscorer awards. In doing so, he became the first ever player to earn all three awards in the same season. 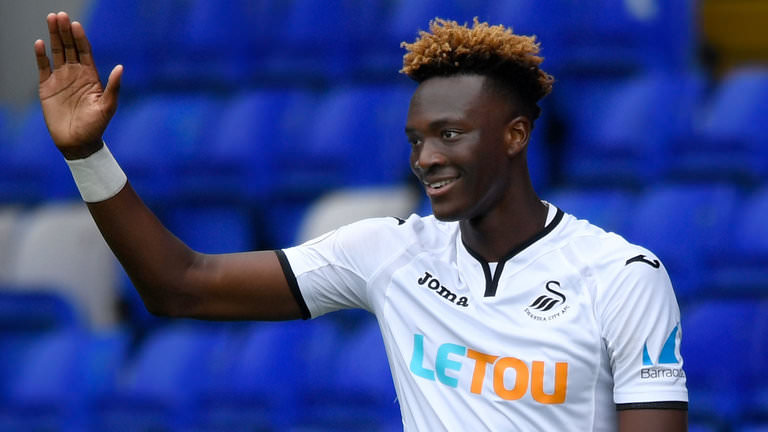 On 4 July 2017, Chelsea announced that Abraham had signed a new five-year contract with the club and later that day he joined fellow Premier League club Swansea City on a season-long loan. Swansea paid Chelsea £5,000,000 for the privledge.

He made his debut for the club on 12 August, starting in a 0–0 draw with Southampton. Ten days later, he scored his first competitive goal in a 4–1 League Cup win over League One team Milton Keynes Dons before scoring his first Premier League goal in his next match, opening the scoring in a 2–0 victory over Crystal Palace. On 14 October 2017, he scored his first brace for his club in a 2–0 win over newly promoted Huddersfield Town which secured Swansea their first home win of the season. Both club and player struggled for form thereafter, however, and by the end of the year Abraham had failed to add to his goal tally.

On 6 February 2018, having gone 825 minutes without a goal, Abraham returned to the scoresheet when he netted twice and assisted a further two in an 8–1 FA Cup Fourth Round replay win over Notts County. The result was also Swansea's biggest ever win in the competition. On 7 April, he scored his first league goal since his double in October. His goal earned Swansea a late draw against West Brom and edged the club a point closer to safety from the relegation zone, though they were ultimately relegated on the final day of the season following a defeat to Stoke City. Abraham scored eight goals in 39 appearances across all competitions during his loan spell with the club. 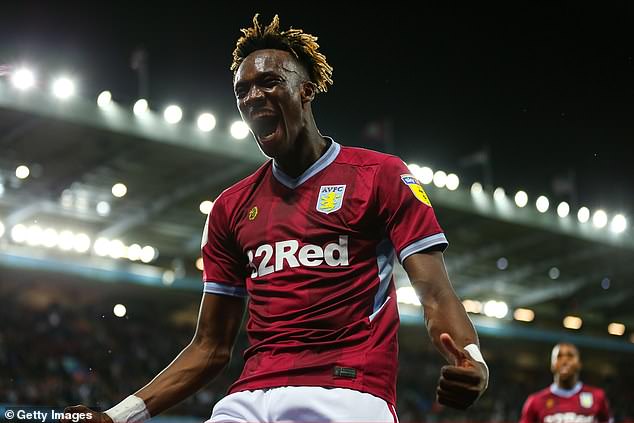 Can Villa hold on to Abraham

Abraham then moved to Aston Villa on loan for the 2018-19 season. With a return of 13 goals in 16 games and 5 assists, Villa manager Wenger revealed there is a call back clause in the January window which he thinks Chelsea might invoke. If I was Chelsea I would call him him back! said Wenger.

He is one of the hottest properties in this division at the moment and I would love to buy him at the end of the season but then we have atleast three loanees that we would love to make permanent in Yannick (Bolasie) and Ademola (Lookman) but we do not have that sort of money. When you have a striker in Abraham combining so well with Jonathon (Kodjia) then ofcourse you want him to stay. I will phone and have a chat with Mr. Sarri to see if we can keep Tammy for the season and maybe beyond, lets wait and see.
1
Login to Quote