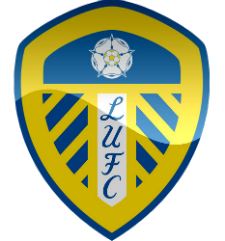 In comparison to the last two it has been a lot quieter on the transfer front although with some unexpected sales i had to do a little more business that i was hoping for. However, here is how Summer No.4 went down.

As expected i shifted on Kiko Casilla for £12m with Juventus his new home. He is a more than capable keeper but with Jordan Pickford here it seemed pointless having two excellent keepers especially as i have two young England goalkeepers Sherwin Greaves and Karl Lee who would be better placed being the back up this season.

Lewis Dunk's relatively disappointing Leeds Career is now over as he was sold on to Norwich for a fee that should get to just shy of £16m when everything is done. He never really clicked which was a massive surprise but does allow me to call up Italian U21 Anthony Anglieri who played in the U23's all season and was a bit of a beast. He is now labelled the new Fabio Cannavaro so i could be on for a great piece of business. That was all i had planned until Roma came in for South African Rivaldo Coetzee and a £25m bid was too good to turn down considering he was only bought for £650k and only had an Ok season for me. As quickly as he left i signed Scott McKenna to be his replacement with the Scot having Premiership experience with Aston Villa and having the right physicals to make him a 1st choice.

Other than that we signed Elias Lopez for the future with the U20 Argentine signing for £1.4m but remaining in Argentina with River Plate to get the game time needed. With Nathaniel Clyne wanted and getting on a bit i should now have a ready made replacement in the wings

I was looking to keep the midfield pretty stable but as Justice pointed out there were some gems in the relegated clubs and i couldn't resist. So meet Felipe Anderson and Abdoulaye Doucoure who joined for £28m and £22m respectively at the beginning of the window. Then later on i went back in again as Declan Rice was snapped up for £20m to give me my first natural defensive midfielder which will hopefully come in useful for games we want to be a bit more defensive in.

Jack Grealish nearly left the club but rejected a contract from Norwich after they bid £30m for his services. I was caught in two minds but instead decided to keep Grealish and instead loan out young Norwegian Kroken to Alaves in Spain. Romanian Morutan came back from loan whilst i also failed to loan out young Viviani after he rejected a chance to go to Schalke. However, the biggest shock was the fact we sold Jack Clarke. Tottenham came in and unsettled him and eventually Man City came calling and bid £60m for his services. It was stupid money but with Anderson in and the returning Morales from loan i felt like we were more than covered.

So Vincent Janssen was moved on for £3m to Verona whilst Raul de Tomas was also sold as Bournemouth came bidding for his services. Again it is a deal that should hit £14m which isnt bad for a striker who was just Ok at best.

To help reinforce we loaned in Swedish striker Alexander Isak from Dortmund for the season and also signed England U19 striker Rob Simpson from Charlton allowing him to stay at the Valley and get 1st team football. It took a fee of £4.5m but i think he could be a superstar with the right luck and development.

So a window where we made a profit but somehow feel a little stronger after the raids on West Ham and Watford in particular. We should have more than enough cover in midfield now with Rice and Doucoure adding to a unit that wasn't weakened with our biggest gamble perhaps being upfront where we have just three young strikers Chicco, Joveljic and Isak.

It was raining goals in pre-season and it followed suit as the season went on. We won our opening 3 league games beating Newcastle, Swansea and Wolves before finally getting unstuck against Man Utd after Pogba scored from a free kick. They are the only team in the league we havent taken a point off so far but it leaves us looking pretty good in the league. 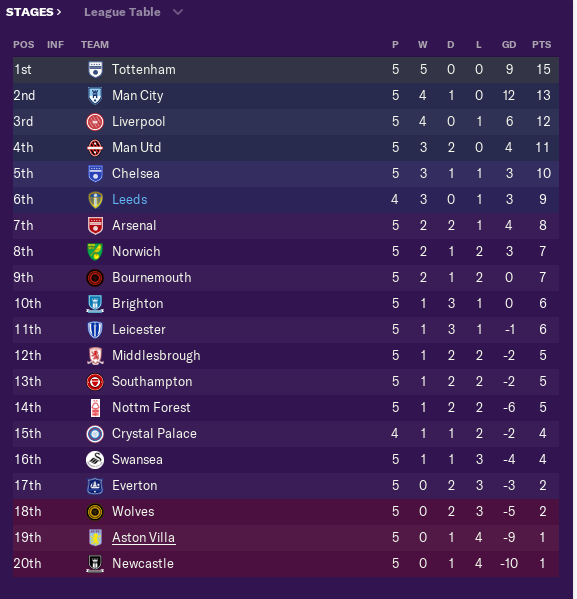 We were understandably 4th seeds having not played in Europe for 20 years but our group of Zenit, AEK Athens and Rapid Vienna should be navigatable meaning we might even have European football after Christmas. Winning the thing will be tough with Spurs, Utd and Valencia in the competition but i would love to get a Quarter final appearance as a real stake in the ground.

Witht the way the opening month or so has gone it is totally possible with all of the new players setting in and we seem to be a step or two above last season as you can see from the Squad sheet and the amount of players averaging over a 7 for us. Felipe Anderson and Alessandro Murgia have been dominent whilst Kik Pierie has emerged as the left back having been excellent in the opening few games.

So confidence is high but i am not sure it is high enough to say the Champions League will have Leeds United in it next season but i want to close that gap considerably. For me a Top 6 finish would be a great result and if we can win a Cup competition with a nice European run into the Quarter finals or beyond then my project here is moving in the right direction.
1
Login to Quote

You are reading "The Nearly Men".