We were second best all over the pitch and got away with a draw in this one. I had to switch to 3 in midfield in the second half to stop us getting overrun in midfield which really limited our options going forward. I've got a big decision to make before the replay on Wednesday.

After the way the game at home went, I opted to use the 41221 for the replay to give us more stability in midfield. It worked a treat as we dominated the game and won with ease, booking a 4th Qualifying Round tie with National League side Hartlepool.

Absolutely disgraceful. In the first half we were excellent, going in at half-time with a three goal lead. The second half on the other hand...**** me they were awful and we were lucky to escape with a draw. The lads certainly felt my wrath at full-time, that's for sure. Big response needed on Wednesday.

Not the response I wanted really. Sure, we were the better side and they never really looked like winning, but a lot of our shots were from distance and wayward.

WHAT HAVE I JUST WITNESSED!? I dropped our wingers into right and left midfield for this one in order to be a little more defensive against a side TWO leagues above us but what I saw was totally unexpected. We absolutely DOMINATED and I mean dominated Hartlepool, their keeper made THIRTEEN saves. What a performance from the lads.

Monday 21st October
Warrington drawn to play away at League Two Grimsby in the FA Cup 1st Round.

Three points, job done. That said, I hope we never have to have that pathetic excuse of a referee again. The guy spent more time with this cards out than he did refereeing the game. He gave out thirteen cards including a second for Lewis Blackshaw late on. 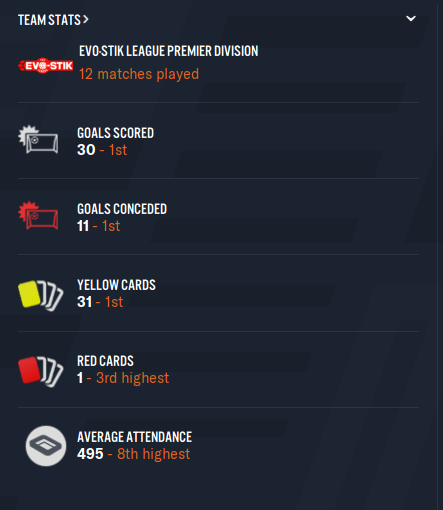 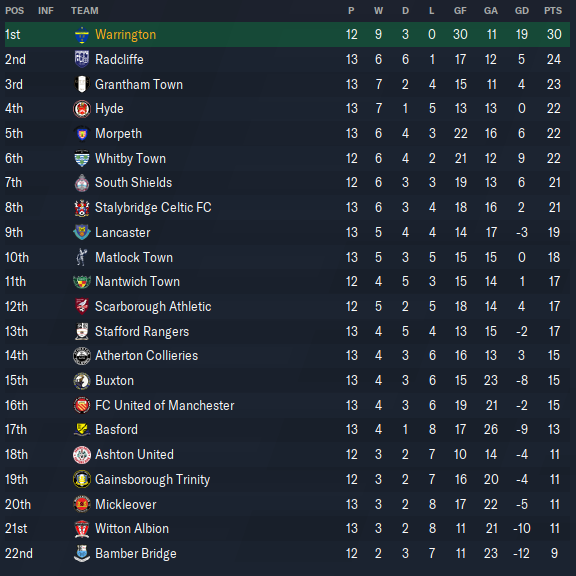 We still sit at the top of the table going into November. If we win our game in hand we'll also go 9 points clear, potentially 12 if we win our next league game.

There are some massive fixtures coming up in November, including a top of the table clash with Radcliffe and the FA Cup tie at Grimsby.
1