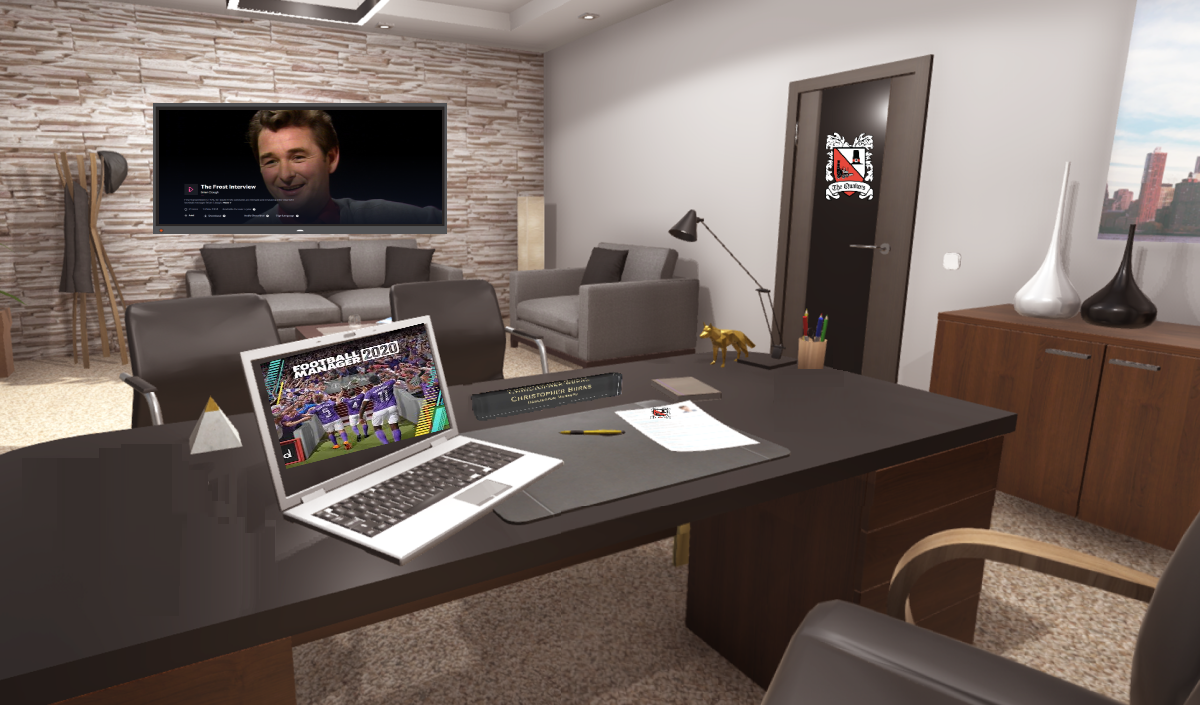 November got off to a bad start for us as we lost to mid table side Kidderminster to great dismay. We were dealt with a massive over reaction to that result as the fans and media jumped on our backs immediately. Our first loss in fifteen games and we were met with public outcry, ridiculous. Now, I'd be lying if I said I wasn't consumed with rage in the immediate aftermath of that game, firstly due to the loss and then the public backlash, it was crazy. I was offered an interview by Macclesfield after that game and if it had been a side a league or two above then some more thought may have went in to it but as it was, I declined the opportunity. I was pleased that the upgrades were made to our youth and senior training facilities finally as well which was a welcome boost. 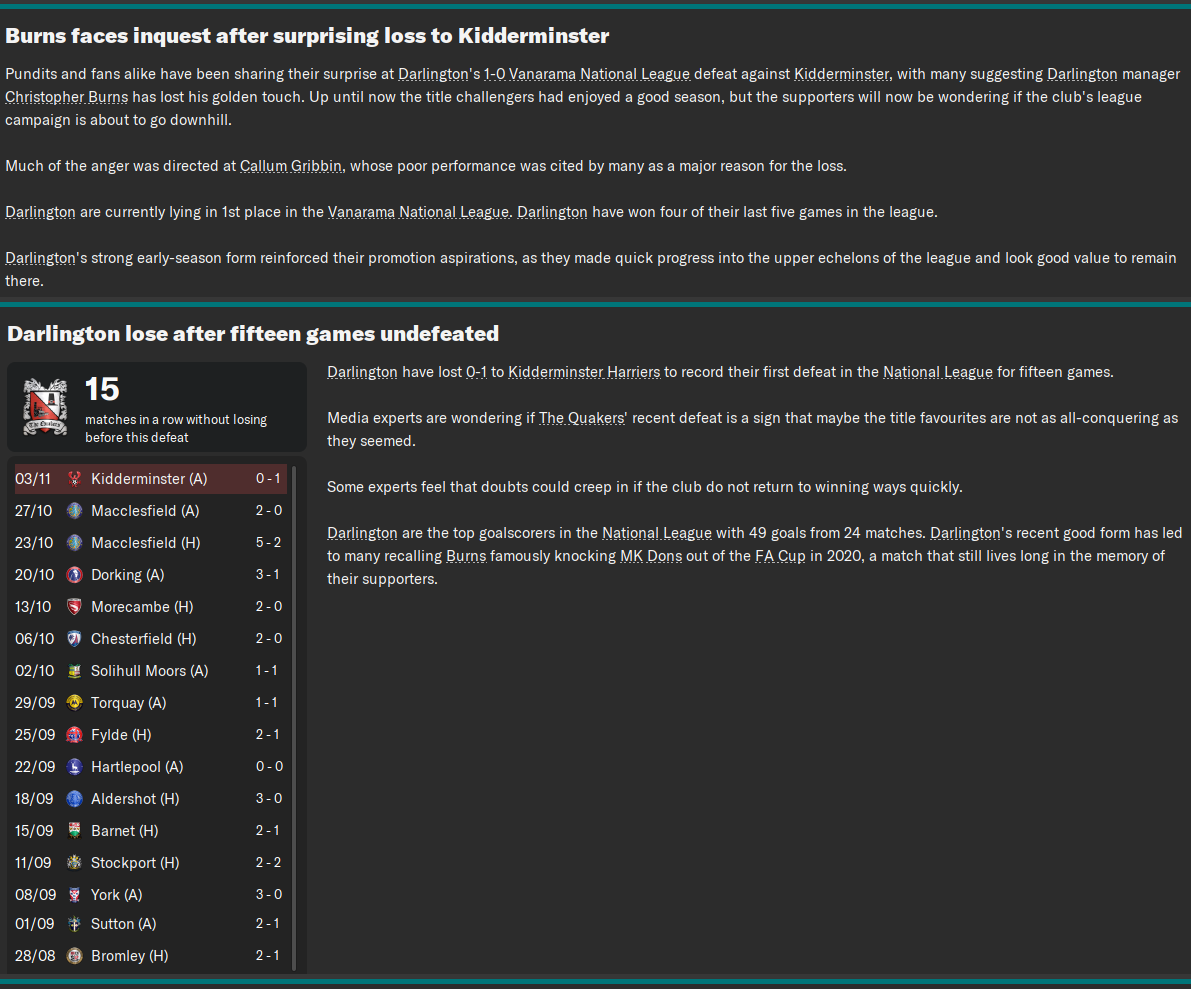 After the dust had settled on the Kidderminster we got right back to work as we wanted to bounce right back and prove everyone wrong. We were dealt a blow when our starting goalkeeper Mathew Hudson was ruled out for four weeks through injury and we were then left with just Ryan Mullen with no alternative to him either. So got to work on finding a goalkeeper that would provide short term cover but when we failed to find someone suited we went and signed the multi cultural Louis Yamaguchi to be our new number one goalkeeper instead. Louis is a great young goalkeeper and immediately became the best at the club when he joined. So good infact, that Japan decided to call him up to the international squad and he missed three games for us during his first few weeks too, go figure! Kgosi Ntlhe missed the same period as he was called up to the South African squad too. Although we missed them both I am thrilled that we have some current internationals in our ranks whilst playing in the Vanarama National League.

Our squad became that much better just a few weeks later as we signed an additional three players. None other than Rolando Aarons rocked up to Blackwell Meadows to sign on the dotted line. The twenty-two cap Jamaican/English winger never made the grade at Newcastle and after a loan spell with Motherwell two years ago he spent a season in the Toon reserves before being released in the summer. I am thrilled to bring him in and I really hope he can rediscover his promise with us as we seek to climb the leagues. Anticipating the demise of Ryan McLaughlin after a broken leg we brought in Nigerian/English full back Moses Odubajo to displace loan signing George Tanner in the side, Odubajo was released by Sheffield Wednesday in the summer. Finally, we added some quality to the heart of an already strong defence in the shape of Darnell Johnson who most recently played with Plymouth in League Two last year on loan. These have been real game changing signings that can continue with us for a couple of seasons. We have also narrowed it down to two trialists we'd like to sign out of the bunch we've had in over the past couple of months. Josh Windass and Nathan Phillips have been training with us whilst we try to sort out the finances to bring both of them in. We've agreed to sell Jak McCourt to Gillingham for £50k, Fiacre Kelleher to Burton for £40k and Tom White will join Forest Green on a free transfer. We will be looking to move a couple more players on in the transfer window too.

In terms of results over the past few months I've been pleased with what we've come away with in our ten games. We had a busy November across three competitions and we won four games, drew one and lost two in that period. Our defeat to Kidderminster was a low point but our other loss wasn't a major blow I didn't feel as the Scottish Challenge Cup wasn't something we planned to be in at the start of the season so the exit to Livingston didn't cause too much upset. Our strikers indifference continued in November as Kian Barratt didn't impress much as he netted just twice in six appearances but even putting the lack of goals aside he played generally poor as well. So, in December George Miller was once again given a chance to impress and he finally came good as he scored four of our thirteen goals in three games and rightfully staked his claim as starting striker. Progress was made in the FA Cup and the FA Trophy and we will face Liverpool in the third round of the FA Cup which will be a significant financial boost to us and we face Woking in the second round of the FA Trophy.

Further good news was had when we agreed to extend Scott Brown's contract by a further year. He has been a fantastic addition to the squad and has chipped in with key goals from the penalty spot as well as five assists, seven MOTM awards, one player of the month award and a third place in the player of the month too. His leadership, team work, work rate, passing and natural fitness stands head and shoulders above the rest of the squad and it was key that we kept him on. As well as signing a new deal Scott has become our vice captain after Jak McCourt's departure and we've also started putting him through his coaching badges too, with a view to keeping him at the club in a backroom capacity once he retires. George Miller earned the player of the month award for December as his resurgence in from was recognised, Brad Lyons was named in third place. Days before it was revealed that I was the manager of the month in December David Johnson called me in for contract talks and an extension was quickly agreed upon. With some new acquisitions, flying in the league and an FA Cup tie with Liverpool to look forward to things are looking good for us. I just need to ensure that the focus remains as we don't want a repeat of last years performance in the second half of the campaign. 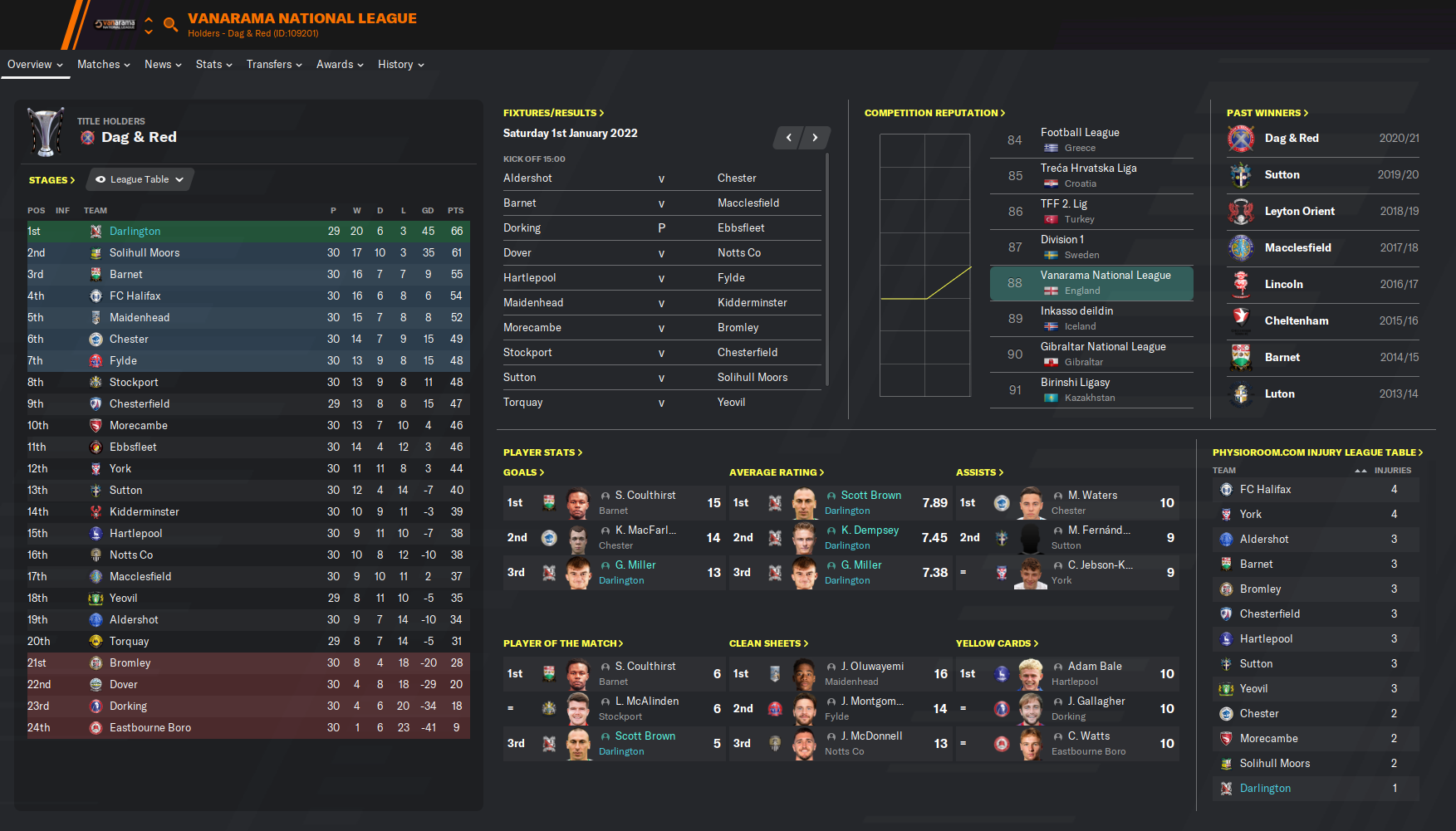 @ScottT It's been good, well we've not got a significant lead at this same stage this year so I'm hoping we'll do the opposite and now go and create an unassailable one.

@Jahendricksi: Spot on, he's been a key cog in the team of late, not quite sure how we managed to get him.

@TheLFCFan: It is, as I mentioned above I hope we can now go on and create a lead which we already had at this point last year and prevent us blowing it again haha!
1
Login to Quote

You are reading "The path of an ambitious Scot".