AZ draw Ukraine side Shakhtar Donetsk in the Third Qualifying Phase of the Champions League. Shakhtar beat FC Kobenhavn 1-1 on away goals to advance.

Despite dominating possession and holding the match on their side of the pitch, Shakhtar get first blood after Felix Eboa Eboa gives away a penalty on a sloppy challenge in the 32nd minute. Maxym Malyshev was able to beat Jasper Schendelaar to give them a 1-0 advantage. It was Shakhtar's first time advancing into our box on the evening. Moments later the match turned further in our favor when Shakhtar's 19-year old Igor Ilkiv committed a professional foul to stop Ole ter Haar Romeny's breakaway and Ilkiv was given a red card in the 40th minute. We still had a 1-0 deficit into the break.

The second half we picked up the tempo to take advantage of the man advantage. Jordan Torunarigha scored his first goal for us off a corner, he smashed in the volley to give us the equalizer in the 49th minute. We continued to press the issue but were unable to get another goal until Angelo Saro scored in the 90th minute off a cross from Abbubaker Mobara!

We take a 2-1 advantage home with us! 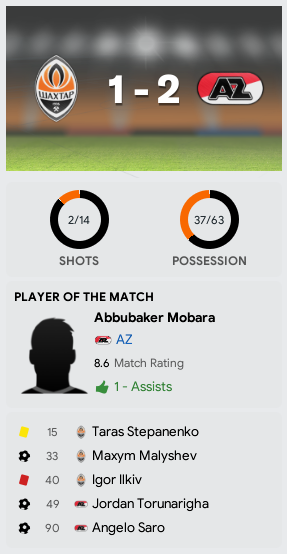 Despite the advantage we brought into the match we wanted to attack them out of the gate. We did just that as the boys were raring to go. Calvin Stengs opened the scoring after converting a penalty in the 12th minute. It was only fitting as he drew the penalty with a great run into the box. Guus Til smashed home a rebound for the second goal of the night in the 24th minute giving us a 4-1 advantage on aggregate. From that point on we choked out the match and were absolute control throughout with them getting their first shot of the night in the 60th minute. 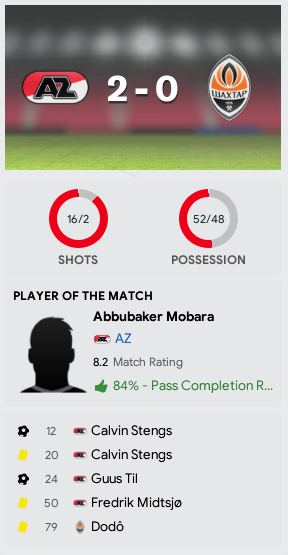 Next up a difficult draw with Sporting. They still have Bruno Fernandes and have added Son from Tottenham along with Steve Mounie on loan from Southampton.
1