Going into October Barcelona sit 6th in the league. Not what Yaya would have hoped for, but still within distance of a title chase. Real Madrid are currently top with 19 points, 7 ahead of Barcelona. Title holders Atletico are struggling early on this season and sit in 11th. 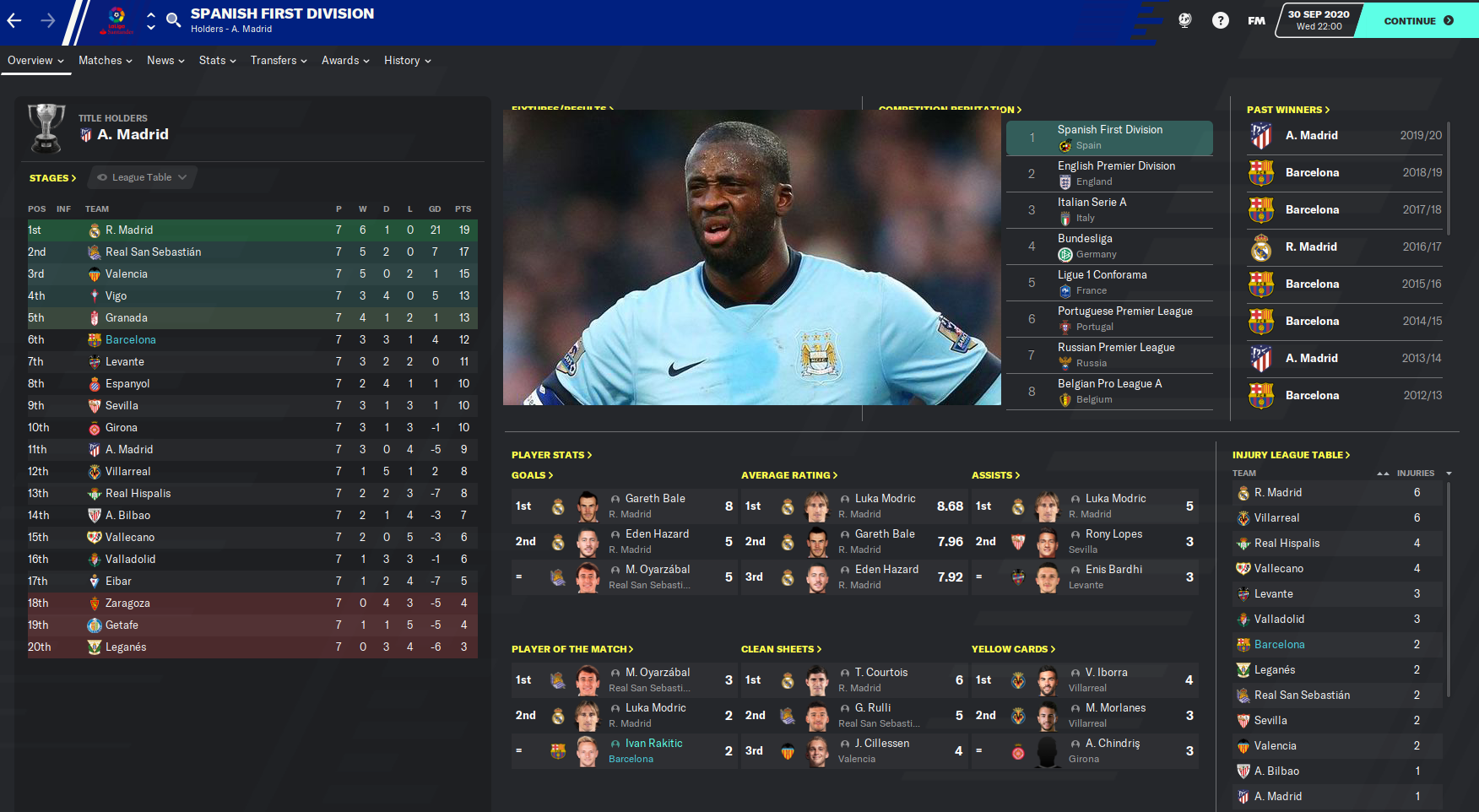 Yaya was left frustrated once more as his side dropped points again. A 0-0 draw at home against Real Sociedad. They were sitting 2nd in the table, so it wasn't a terrible result but Yaya is eager for his side to start turning their draws into wins as he is seeing Real Madrid run away with the league already and we are not even halfway through the season. Barcelona travelled to Leganes and put them to the sword as expected. Leganes were rock bottom of the league and Yaya's boys ran rampant in a 1-4 win. Esposito, de Jong and Messi got on the score sheet as Leganes also scored an own goal. Barcelona dominated possession (63%) and looked like the Barcelona side's of old, but Yaya want's his team to perform like that against the top teams. Barcelona travelled to the Bay Arena to face Bayer Leverkusen. The German side were the superior team and won the match 2-0, goals from Leon Bailey and Kevin Volland. Yaya is really struggling against better teams and needs to reflect on his tactics as he has stuck with the exact same tactic since he took over the club, and another defeat in the Champions League could see his side eliminated from the group stage. After the loss to Leverkusen, Yaya and Kolo decided to discuss the tactical set up with the players in a meeting. The players discussed that they would like to play with an attacking midfielders to create more opportunities going forward, and by playing on the front foot believe they would get better results. Yaya listened to his players and in the next match changed to a 4-2-3-1. Messi filled in the attacking midfield position, Fati and Esposito started the match too as they have been impressing in training.

Barcelona faced Valencia away from home in La Liga and it was the players first opportunity to express themselves in the new formation. Yaya still asked the players to play a tiki-taka style of football, but more attacking then they have been playing this season. Barcelona played well, and in the 75th minute Dembele gave Yaya's side a 1-0 lead. Griezmann was subbed on for Messi and made it 2-0 after 83 minutes. Rakitic came on late and put the icing on the cake with a very late goal. A fantastic 0-3 win for Barcelona showing that Yaya's faith in his players paid off. Messi stated after the game "Yaya trusts us, and he listens, as a player, that is a dream". The Barcelona players and fans delighted with the result and the open, friendly manner that Yaya has shown, even when his team has been struggling. 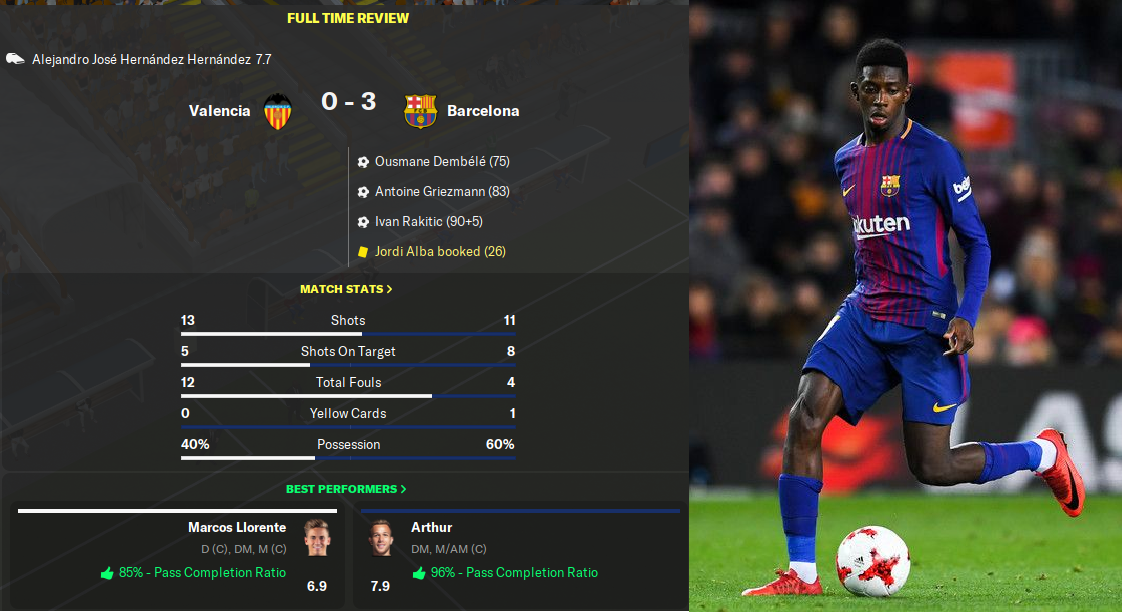 Sticking with the 4-2-3-1, Barcelona picked up back to back wins beating Girona 1-0. The only goal of the game came from Antoine Griezmann, a rocket from 30 yards into the top left corner. Going into the final game of the month, against Atletico Madrid at the Camp Nou, Barcelona find themselves 3rd in La Liga. Atletico have recovered from their poor start to the season and are currently in 6th place, Lemar, Costa and Felix have all been key attackers for Atletico this season, and the Barcelona defenders are prepared for a tough game. Yaya stuck with formation that has seen his side pick up some good form. He is still showing faith in younger players, starting Fati and Esposito. Dembele played on the right with Messi in behind the striker. Atletico didn't make any notable signings after winning La Liga last season. During a solid first half for Yaya's side, Ansu Fati looked like a real star, and it was the 18 year old who provided a brilliant cross for Dembele to give Barcelona the 1-0 lead. Dembele scored his 4th goal of the season, the Frenchman demanding a starting place but also being closely watched by PSG and Manchester United scouts. The game progressed and Barcelona continued to create chances, it was only a matter of time before they took a 2-0 lead. Substitute, Franciso Trincao is a player to watch for the future, and he came on to score his first goal for Barcelona. Messi whipped in a brilliant ball from the right side of the pitch and Trincao headed past Oblak. 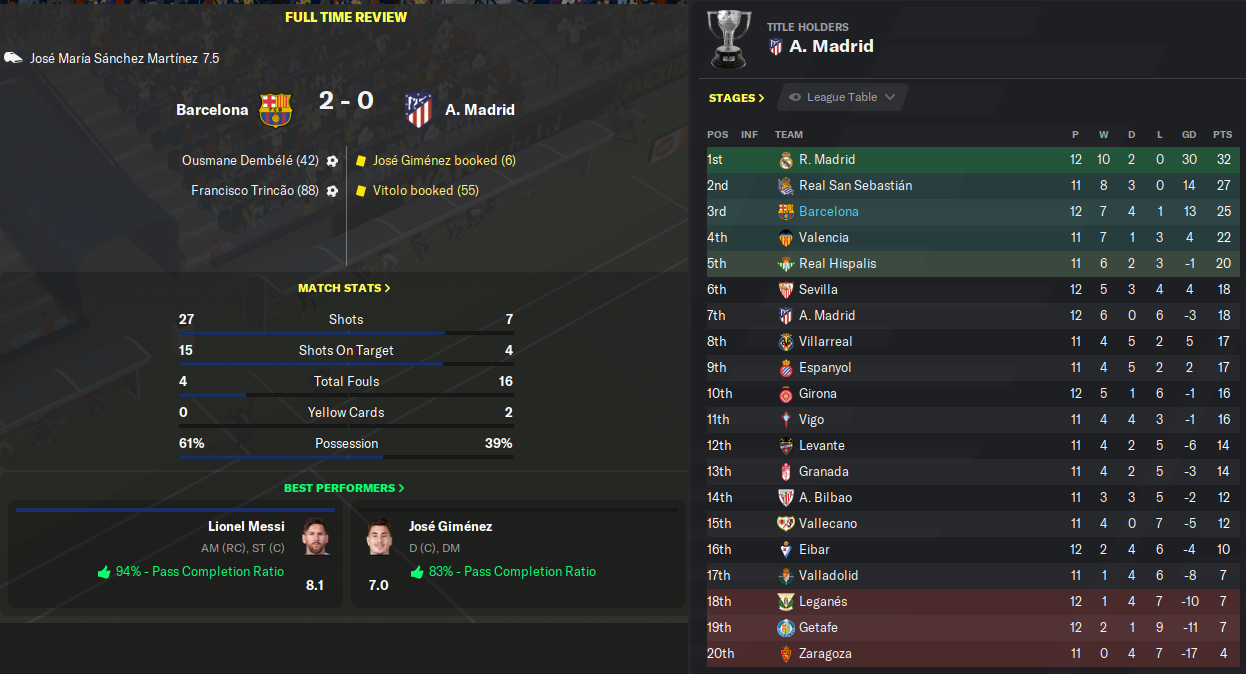 That concluded a dominant victory for Yaya and Barcelona, a great end to the month. Since changing formation Barcelona have won 3 from 3 and look a much better side. At the end of October Barcelona are 3rd in the league, behind Real Sociedad and Real Madrid, both of those sides are yet to lose a game. Barcelona are showing signs of improvement and the younger players are really starting to shine, the likes of Fati, Bennacer and Dembele really standing out this month.
1

You are reading "The Barcelona Way".