Zed: Cheers dude, it took quite a while, not gonna lie

Neal
5 years
Awesome update, how you had the patience to type that the world will never know. 3rd place? Bookies are fools

pompeyblue
5 years
Neal: Thank you, and haha, indeed they are 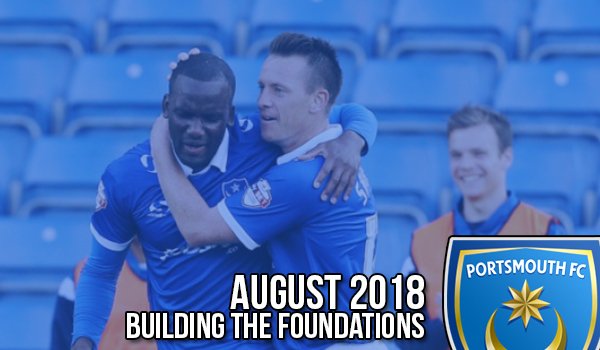 Here it was, after the long wait and much anticipation, the season was finally underway. With the opportunity to win some early silverware in the Community Shield against Manchester United, and the big South Coast derby, it was an important month for Pompey despite just 3 games for the players to test themselves in. Two of these were league fixtures, and both we would be expected to win in, against Southampton of course, as well as Cardiff City.

Wembley Stadium was the venue for the Premier League curtain raiser for Portsmouth, against Manchester United in the Community Shield. It was a sturdy display from Joshua Hull’s men and they took the lead just 13 minutes in through Aleksandar Mitrovic, after some sustained early pressure. Adnan Januzaj was a real threat for United however, and in the second half Januzaj bagged the leveler, with a clinical finish into the bottom corner. The Blues were not to be stopped though, following a neat passing move Jack Grealish stuck the ball into the back of the net, with Pompey having enough about themselves in the last half hour to hold off their opponents and claim yet another trophy.

What a game to kick-off the Premier League season for Pompey, going head to head with fierce rivals Southampton. It wasn’t the prettiest of encounters though, with challenges flying in and the tempo often broken down with the amount of fouls conceded by both sides. Thankfully for Portsmouth, they made the most of their limited chances, even if it took until the second half for the opening goal to go in. Aleksandar Mitrovic was unsurprisingly the man to put his side in front with a cool finish, adding to that with a powerful header in the final 10 minutes. The Saints pulled one back via a penalty, but it was the visitors who picked up all three points.

The final game of the month, was also Portsmouth’s first home clash of the new campaign, up against newly promoted Cardiff City. Ex-Pompey boss Michael Appleton was in charge of the away team adding a bit of an extra spice to the match, and it was his old side that taught him a lesson, in an unwelcoming return to the top tier of English football. Aleksandar Mitrovic again made the most of his opportunities, hitting a first half brace, to put the hosts into a 2-0 advantage. But, this was to be reduced in the second half, with a deflection guiding the ball past Nicola Leali. The Bluebirds may have scored, but any hopes of a comeback were dashed when summer signing Manolo Gabiaddin made it 3-1, and sealed the win for his new club. 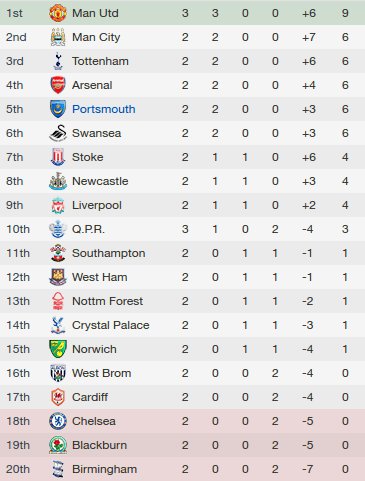 With so little games played in the Premier League so far, the table is pretty irrelevant, but having picked up maximum points from their opening two games Pompey sit in 5th place. 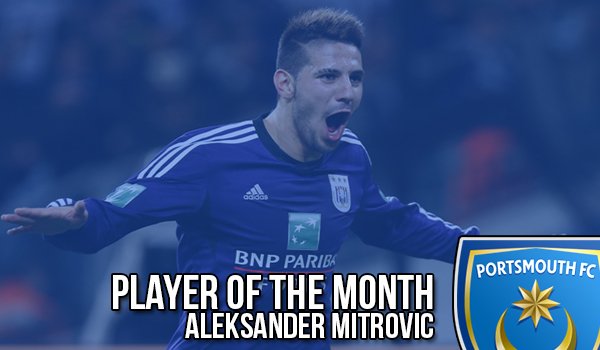 There was no decision for the Player of the Month award during August, with Aleksandar Mitrovic the clear victor. The Serbian striker was in top form showing his clinical nature with 5 goals to his name over the course of just 3 games, including two consecutive braces against Southampton and then Cardiff City. He is born goalscorer, there is no doubt about that, and just as last year will be a hugely important player for the club this season.

Looking at the fixtures, there will certainly be some tougher tests in the forthcoming month. Liverpool at home is the standout match, but I will be expecting a strong performance from the team and the three points, with the rest of the games winnable too.

Walter
5 years
I must admit, I haven't commented on this in ages! Congrats on 100k, the Community Shield and what a fine season preview of the PL!
Login to Quote

pompeyblue
5 years
Feliks: Thanks, it certainly does!

Walter: Appreciate it Walt, coming from such a fine writer as yourself 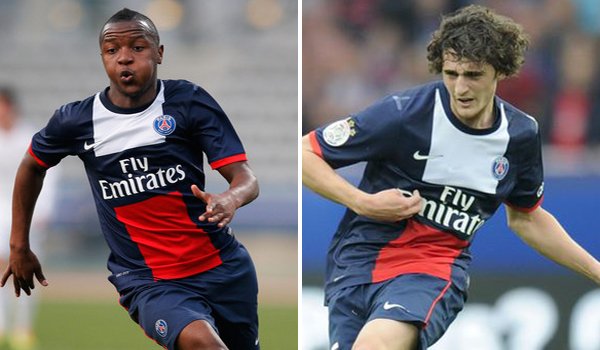 Portsmouth have wrapped up their first deals on transfer deadline day with Hervin Ongenda and Adrien Rabiot both heading to England from Paris Saint Germain, as Nick Powell heads the other way.

Angel Correa, Josuha Guilvogui and Manolo Gabbiadini all agreed moves to the Premier League holders earlier in the window, and the start of deadline day has brought around two new faces at Fratton Park as well.

Both Ongenda and Rabiot are products of PSG’s Academy, and at 23 years old, are well acquainted with one and another having gone up the age groups at the same time. They have also both appeared for France at U21 level albeit, Ongenda has only featured 9 times compared to Rabiot’s 21 caps.

Ongenda however, was still believed to have a bright future ahead of himself, making it a little surprising as to why he has moved on. The fee was just £600k although Nick Powell, a man who struggled to find his way in a Pompey shirt, has been included in the deal too. Then again, considering the wealth of talent there was in Ongenda’s favoured striker position, his transfer actually isn’t all too surprising.

Luis Muriel, Luuk De Jong, Christian Benteke and Enes Unal are the options in attack for Laurent Blanc but even in attacking midfield, another role Ongenda can operate in, he wouldn’t have much of a chance of making the lineup with players such as Iker Munian and Miralem Pjanic preferred ahead of him.

This has been reflected in recent times too, with Ongenda placed in the reserves for the entirity of last season. To be fair to him, he was a prolific scorer, bagging an impressive 24 goals in 28 games yet this still wasn’t enough to convince that he was worthy of a spot in the first team.

As for Rabiot, his departure was expected and it was only a matter of time, as to when he left Parc des Princes. Again, he was severely lacking game time and couldn’t even muster a place in the reserves sides so the supporters will be relatively pleased with the £4.5m they have received from his sale.

With Joshua Hull still locked up inside the training ground, working on ongoing deals, there was no word on the new additions from the manager, but that is to be expected on a day as busy as deadline day. Rabiot and Ongenda were available for a word however, both expressing their delight at a move to the Premier League champions, before quickly departing the training ground. Expect more news and updates from Portsmouth as the day progresses.

Walter
5 years
Hmmm, not a big fan of Ongenda. Been leading the line for Benfica against me for quite some time now

(Hope these two players add to your already great team!)
Login to Quote


Emblazed by bright lights, I struggle to adjust to my surroundings, yet I have finally awaken. I don’t know where I am and I don’t know what I am doing, but I hear people shouting frantic and shocked by my presence. For them it’s a sigh of relief, after so long, I was back.

As my vision begins to become clearer, I get a better view of the room I am confined to. Strapped to a bed, I can’t move. An oxygen tank fills me with breath and it seems I am struggling to stay alive. I can’t remember how I have ended up in this situation, it can’t have been pretty though.

People - doctors crowd me, asking if I am okay, not for a minute realising that I am still in a state of confusion. Finally, when everything dies down I am left in the room with just one nurse, taking her time to sit down beside me and explain everything.


Sorry for such a short and probably confusing update, but this is just the introduction of my return, because as you may know I have been inactive on the site for a little while now. For that I do apologise, but I have been incredibly busy with school and just haven’t had the time to update the story nor get on the site either. Hopefully now however, I can start to update again albeit not as regularly as I would like to, and we can finish off this adventure with Portsmouth.

Thanks for your continued support

wellsy1498
5 years
Just read through this again and its a great story dude. You have made some great progress and its a really good read, keep it up

The Champions Need Their Saviour 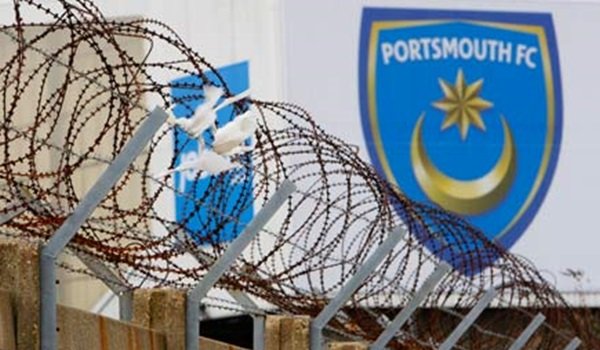 It’s been a horrible season for Pompey, failing miserably in their defence of the Barclays Premier League title. There’s only one reason for this, off the field issues, with manager Joshua Hull devestatingly in coma for 4 months. It’s an occurrence that has brought the entire footballing world together, all wishing well for a young man who has become a managerial mastermind.

Yesterday, the rumours were confirmed that Hull has finally awoken. Relief, celebration, and happiness for his family, friends and everyone that knows this great football person. For Portsmouth though, the problems continue. 9 Premier League losses, 16 points off the top in 10th place, Alessandro Del Piero, the temporary manager, has simply not done well enough at Fratton Park.

The only consolation for the club is their Champions League form. Before Hull’s tragic car accident, the Englishman had highlighted this competition as their main priority this year, he so desperately wanted to bring the trophy to his hometown club. Finishing top of a group containing Juventus, CSKA Moscow and Fenerbache bodes well for their prospects of actually winning the cup, but whether Hull will be able to led the team to the trophy is another question altogether.

His condition isn’t looking good still, and he may not even be able to step out onto the touchline ever again. But this is no ordinary man we are talking about, and if anyone can make a speedy recovery, it’s this man. Pompey fans will undoubtedly be hoping he will make a return, we will just have to wait and see.

Back to Del Piero, a legend of the game as a player, his ability as a manager is quite the opposite. With a strong squad at his disposal he has struggled massively to achieve results for an expecting fanbase. They have turned on his back quickly, and he is clearly feeling the pressure on his back. The team has been leaking goals for fun, suffering surprise losses to Norwich, Stoke and Blackburn.

With the January transfer window just around the corner, reinforcements are needed but the biggest signing would of course be the homecoming of Joshua Hull. Pompey’s saviour, to step forward, and work his magic again.