Josh_MU
6 years
Woah, some awesome signings there. Can't believe they cost you so little. Great update as always!
Login to Quote


Thanks, they were transfer listed and when I saw their small asking price's I didn't hesitate to sign them!
Login to Quote

Yeah, hopefully they settle into the side quickly.
Login to Quote

josip-rangers fc
6 years
Hello,I'm new on the forum.. I write also with Pompey...

Thanks, welcome to the site!
Good luck with Pompey 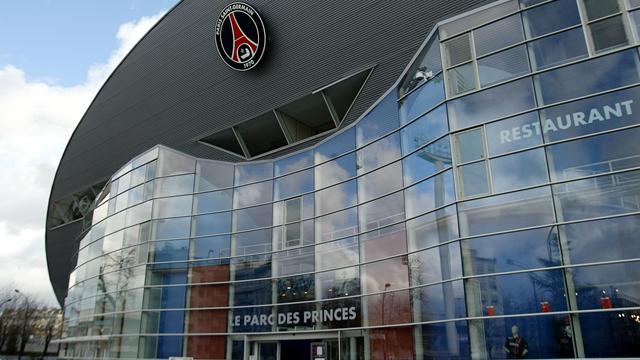 The 20 year old Frenchman began his career at PSG and has a blossoming reputation in football with him being known as a top class central defender in the making. Adam has made 11 France U21 appearances, scoring 1 goal however he has only made 1 senior appearance for Les Rouge-et-Bleu. He could have made the decision to play for Qatar, with his parents being of Qatari background but instead he became part of the burgeoning young French national side. He is primarily a central defender however he can also operate as a defensive and central midfield player too.

Although, Adam has hardly featured for PSG, he has turned out for both FC Nantes and Anderlecht in other loan spells away from the Parc des Princes. In total he made 39 appearances while away on loan over a period of two seasons, scoring 1 goal altogether. He did impress though with some sturdy and consistent defensive displays. He can only get better as his confidence will grow and as he gains more first team experience.

In the aid of receiving more first team experience, PSG subsequently loan listed Adam with Portsmouth being the interested part. Pompey qualified for the UEFA Champions League last season and targeted Adam as the perfect addition to the defensive area of their squad. PSG promptly negotiated an acceptable loan arrangement for Adam with the Blues and Joshua Hull today spoke about their new signing, “I am very pleased to be able to welcome Mohammed (Salem Adam) to Pompey and I believe he is a class loan signing. He may be young and inexperienced to the league but his ability is the stand out reason why I wanted to bring him here and I know he will be able to deliver good performances consistently.”

Paris Saint-Germain boss Laurent Blanc also spoke about Adam, albeit briefly, saying “We wish him all the best at Pompey and I believe he will hugely benefit from this loan move. They are a good club and it will be a great experience for him.”

Blanc also confirmed the rumours that Mohamed Salah was flying into Paris ahead of a medical regarding his move from Atletico Madrid to the Ligue 1 club, “Yes it is true. Salah will arrive in Paris soon to completed the deal and have a medical.” 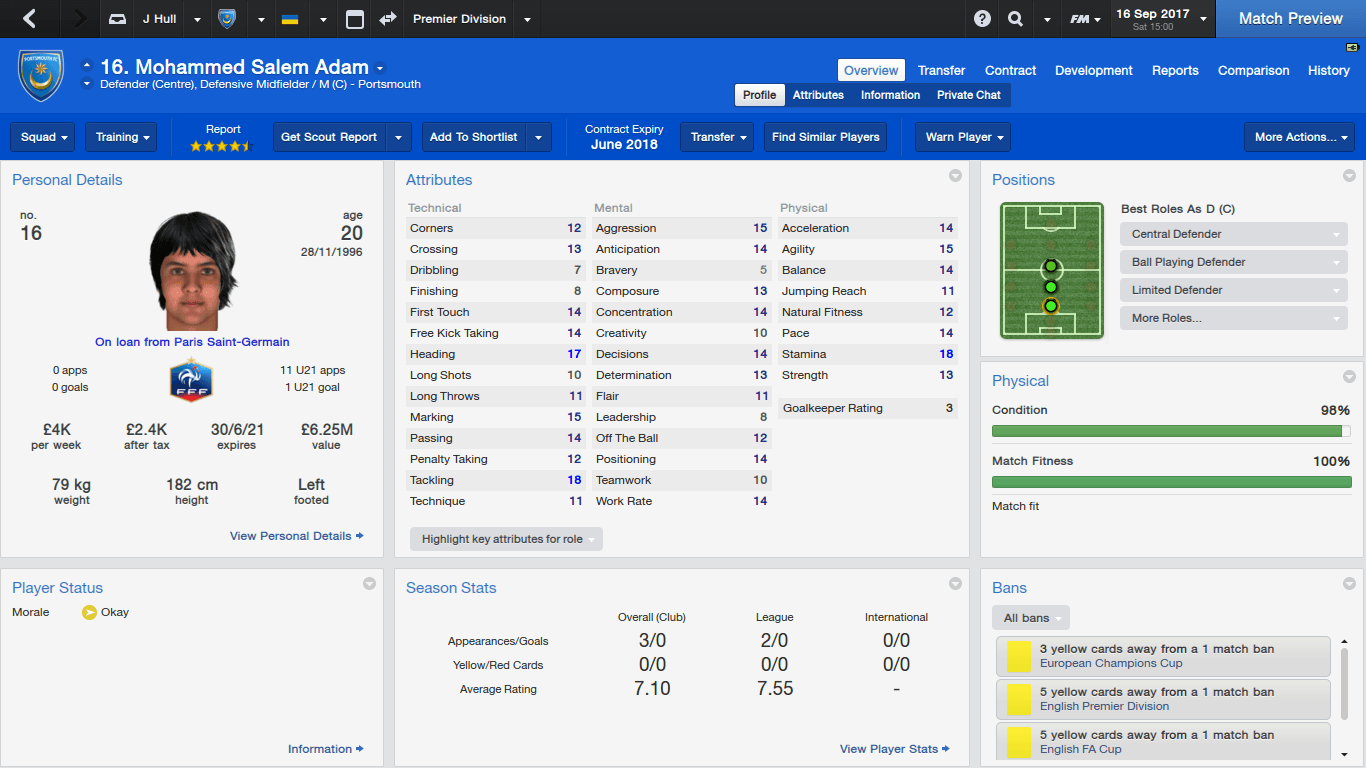 MJK46
6 years
Hopefully he does well for you!!
Login to Quote

Thanks, hopefully so!
Login to Quote

Neal
6 years
Wow, that lad looks really good, I can already tell he'll be spectacular for you! Versatile as well because he can play in midfield.
Login to Quote

Neal
6 years
Reply number 700, congratulations! This story is awesome, and this is a massive landmark to have reached. Keep it up, 1k is not far away!

pompeyblue
6 years
Neal: Yeah I was really impressed with him and am delighted to have signed him even if he is only on loan.

Thank you so much Neal and a MASSIVE thanks to every single member who has posted on this story and supported it. Once again, thanks a lot and as Neal said, keep up the support and 1k could be an achievable target

Two in, two out for Pompey 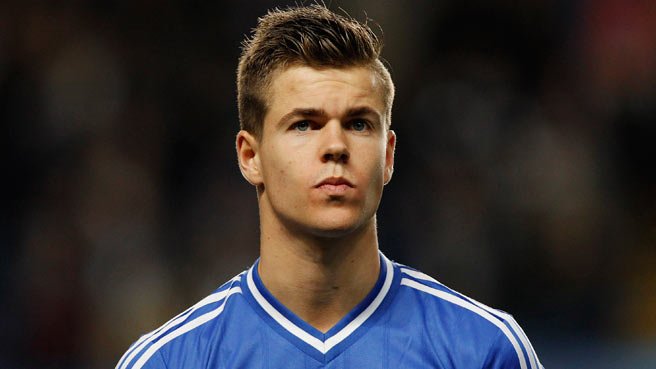 Portsmouth FC have announced the signings of two players albeit one on a loan deal. Marco van Ginkel has joined the South Coast club for a club record fee of £15.5m from Arsenal and also following van Ginkel out the exit door of The Gunners is Mario Pugilese who joins Pompey on a season long loan deal. Meanwhile, left back Graeme Shinnie and right back Mark Little have departed in a double deal to newly promoted Premier League side Everton, for a combined price of £2.2m.

Dutch midfielder van Ginkel, 24, has joined Pompey after seasons of outcast at Arsenal and previously Chelsea and is now looking for a club he can stay with for a long period of time. He was transfer listed by request after a lack of football at Arsenal, the club he signed for in 2015 for £10m from another London club in Chelsea. He only made 18 appearances in North London, scoring 4 goals. He did however make significantly less appearances at Chelsea, just 4 in fact after signing from his hometown club Vitesse Arnhem in 2013. At Chelsea he was expected to be a player of the future and after a year or two of development of Mourinho, it was thought that he would start to break into the first team however this never happened. Instead, what followed was two seasons of loan spells at Reading and then Stoke.

It’s fair to day that his career in English football has not really been much of a success but he is looking for a new lease of life at Pompey after breaking the club’s transfer record which previously stood at £11m for the transfer of Peter Crouch from Liverpool. £7.5m of the transfer fee paid by Pompey is admittedly being paid off over a period of 48 months nonetheless there will still be a high amount of expectation amongst Pompey fans, for van Ginkel to perform to the highest of standards. Pompey boss Joshua Hull though believes that van Ginkel will step up to the mark and become a key player for the club, “It’s a great capture for the club as he is a quality player who can help take the team to the next level. I am totally confident that he will step up to the mark and will perform at the highest of levels, becoming a key player for us this season and the forthcoming seasons.” 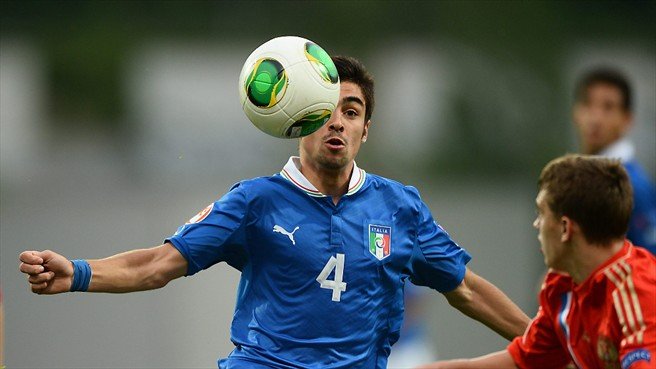 Another man who has made the switch from North London to the South Coast is Italian midfield wonderkid Mario Pugilese, just 21 years old, joining for the season on loan. He is highly regarded in England and amongst the Italian national side setup with his ability to pass the ball know to be one of his best attributes. After signing from Atlanta for £4.1m in 2013 and then being involved at Nottingham Forest on loan for two seasons, Pugilese will be looking to prove that despite still being young he is already starting to fulfill his potential by playing well at Pompey. Arsenal manager Leonid Slutskiy told Sky Sports that this loan move will hugely benefit Pugilese, “It’s going to be of huge benefit to him. He will have the chance to play a lot of games for a good side in the Champions League and will gain invaluable experience. Pompey will definitely look after him well and so will their manager who I respect a lot, Joshua.

Heading out of the exit door for Pompey is one time Scotland international left back Graeme Shinnie and English right back Mark Little. Both players were signed on free transfers in the summer of 2014 and 2015 from Inverness and Peterborough, respectively. Little was a key player in the club’s League 1 and Championship title winning campaigns whereas Shinnie was more of a squad player and back up option. However, both players have been loyal servants for the club during their spell and always gave their all n matter what. Everton have now added both players to their ranks for a combined fee of £2.2m, increasing the total incoming players this summer for the Merseyside club to 10 players.
Login to Quote

Josh_MU
6 years
Two great signings there! van Ginkel is such a great capture!
Login to Quote

Thanks, I am looking forward to seeing what they can do!
Login to Quote