Gazbuscus
7 years
As a Reds fan myself I will be following this with interest. I'm happy with your leadership so far though I do question your motives breaking up Agger and Skrtel. Selling to Man City might come back to haunt you - hopefully not.
I like the tactics and personally agree that Liverpool should always play without wingers. They are very strong in the center of the park and you should always play to your strengths.

I like the player manager twist too. Good job so far.
1
Login to Quote

2013-11-08 13:48#142441 Gazbuscus : As a Reds fan myself I will be following this with interest. I'm happy with your leadership so far though I do question your motives breaking up Agger and Skrtel. Selling to Man City might come back to haunt you - hopefully not.
I like the tactics and personally agree that Liverpool should always play without wingers. They are very strong in the center of the park and you should always play to your strengths.

I like the player manager twist too. Good job so far.

IRL I would hope the partnership of Agger and Skrtel never breaks ! ( Quite pissed with Sakho right now , he fails to close down anybody

) , but in FM I wanted to see how I do without Agger . And financing other moves was other motive .

I'm happy that you are enjoying the story !
Login to Quote 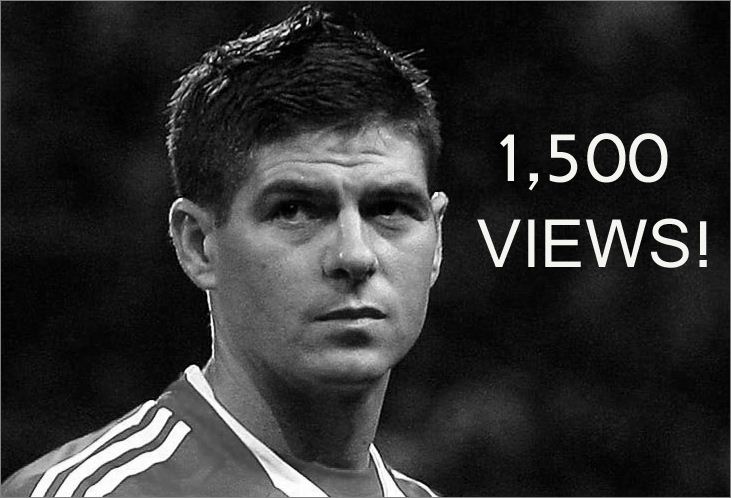 Agger is one of my favorite players too. But I had to sell him

I'm glad you like the transfers!
Login to Quote


Liverpool survived a late comeback from Swansea as Steven Gerrard marked his first match at Anfield as a manger with a win. Daniel Sturridge put Liverpool in the front in the 27th minute and defender Eder Balanta scored his first goal for Liverpool with a thumping header and a rebound. 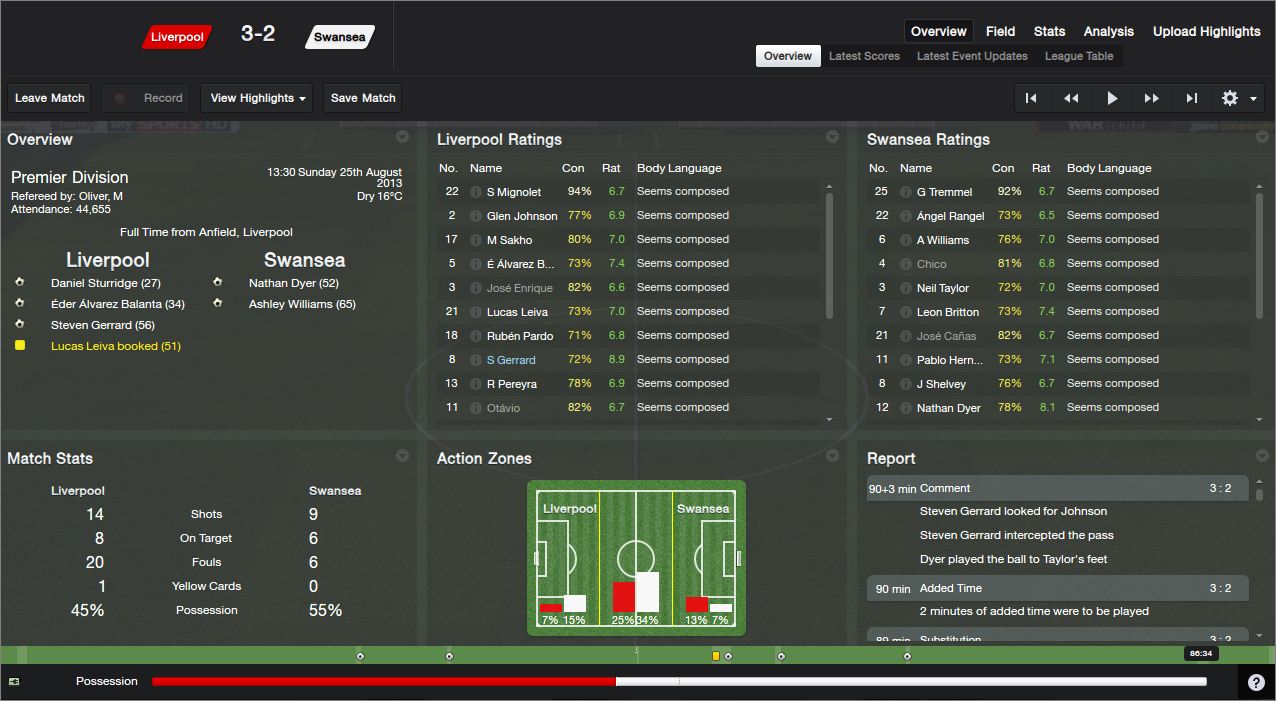 
Former Red Jonjo Shelvey made his presence felt at Anfield by setting up both of the Swansea goals and threatening Mignolet on a numerous occasions with this long shooting. The midfield pairing of Lucas and debutant Pardo failed to take control of midfield while Swansea attacked heavily from the middle of the park.

But striker Daniel Sturridge put Liverpool in the front after getting one on one with the ‘keeper after an excellent counter attacking move started by Steven Gerrard. Liverpool doubled their lead soon after Balanta hit the post from a Steven Gerrard corner and pounced on the rebound.

Swansea started the next half brightly and were soon rewarded for their efforts when Nathan Dyer lobbed the ball over the rushing Mignolet. But they were pegged soon enough when Steven Gerrard rolled back the years with a goal from outside the box to make it three for Liverpool. Swansea responded with Ashley Williams scoring from a corner.

Swansea dominated the rest of the match but were unable to break a disciplined Liverpool defence. Swansea had their 85th minute goal from Pablo Hernandez disallowed for a controversial decision of offside. Assistant manager Rodolfo Borrell attended the press conference in place of manger Steven Gerrard. “It wasn’t the most convincing performance from us but we remain focused and got the necessary result. Steven was brilliant through out the match and so was Sturridge.”

Liverpool will face Carlisle in the Capital One Cup on 28th at Anfield .
Login to Quote

Slogh
7 years
Nice work there, Ill try to follow this story as it continues!
YNWA
Login to Quote

I'm glad you like it . But the last update wasn't too good as I was doing too many things at a time and wanted to rack up my posts to enter FMSGT , I promise the next will be better !

Manager’s notes – Carlisle and Other Matches

The next match was a cup tie against Carlisle , and I decided to bring on some fresh faces for the game. I knew I wasn’t 20 anymore , I had to rest myself for a few matches. So in came Raheem Sterling and Lucas was replaced by Craid Roddan who made his senior debut for us. Yesil had an injury hampered season last year but Sami had spoke highly of him so I decided to give him the chance to lead to line , and Ryan McLauglin was another new face in the side. The side looked like this. 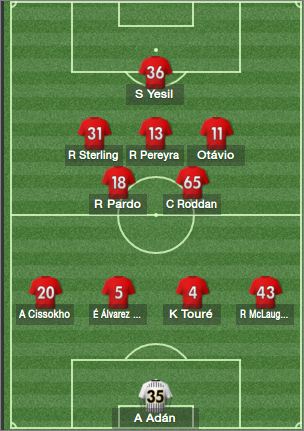 Despite making many changes to the side the team played very well. The start wasn’t good Carlisle were in the front after 8 minutes. But Raheem set up 3 goals for Balanta , Moses and Pardo. And finally I rounded it up with a penalty that had been earned by Pereyra. This leaves me with another option for the AMC role. I plan to use Sterling more frequently now after this MOTM performance but not as heavily as he featured last year. So here is the final result. 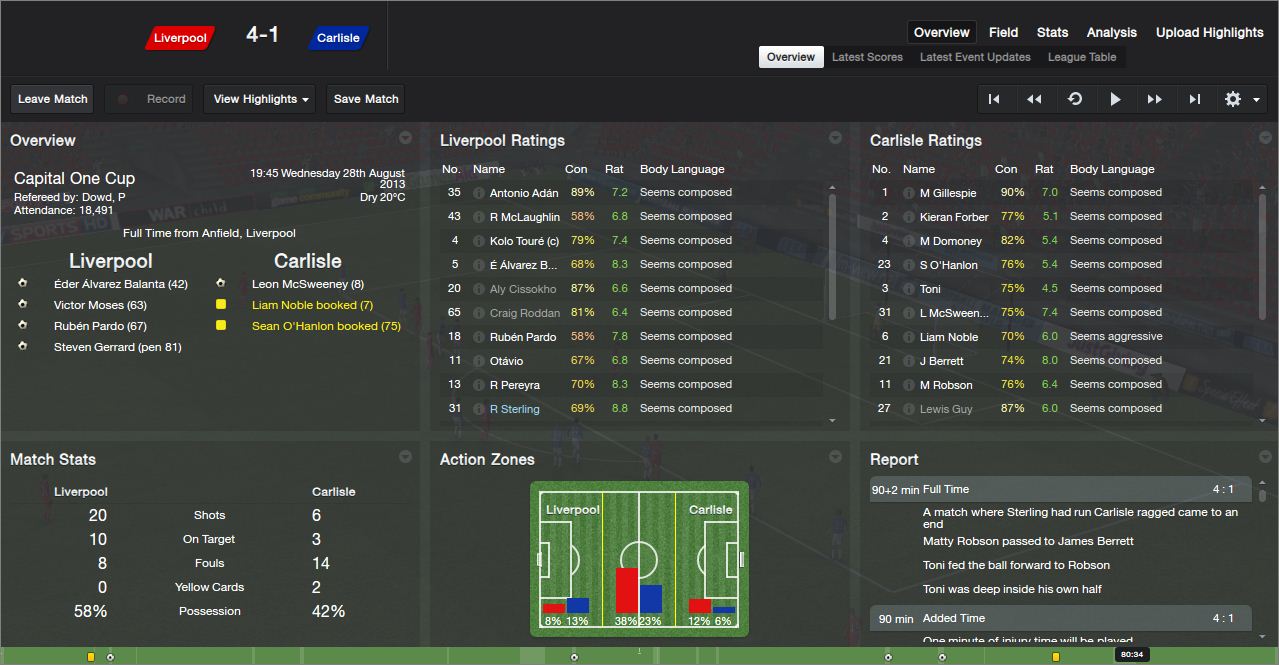 Moving on to the next match , aginst Crystal Palace . We conceded early ,again .And we conceded late in the match too. I decided to go with Skrtel and Toure in the defence as Balanta was injured for two weeks. And Skrtel was solid throughout the match. But not so with Henderson. Here is the formation . 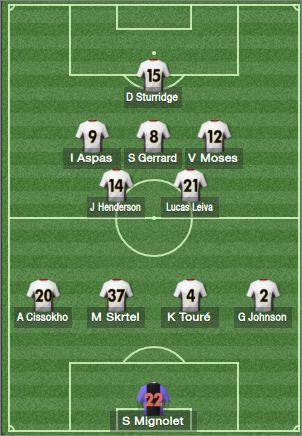 His misplaced pass in the first minute and some inefficient work from Cissokho saw Chamakh score from a header from inside the penalty box. But some neat work from Sturridge saw us get a equalizer. An while Apsas was pretty bad on debut he was good today. His freekick found Moses who put us in the front . Another good run across the wings from Aspas and he found Lucas who unleashed a shot at goal which was blocked from a defender only to fall near my feet and I had an easy goal to score. But a defensive mix up with Lucas and Skrtel gave Crystal Palace a chance to score again in the 82nd minute.

While I see the midfield and attack clicking , the defensive midfield and the defence need to gel pretty soon. We can’t always outscore the opponents. I needed a better defensive coach , and I required it as soon as possible. I will discuss with Rodolfo and the scouts and consider the options. 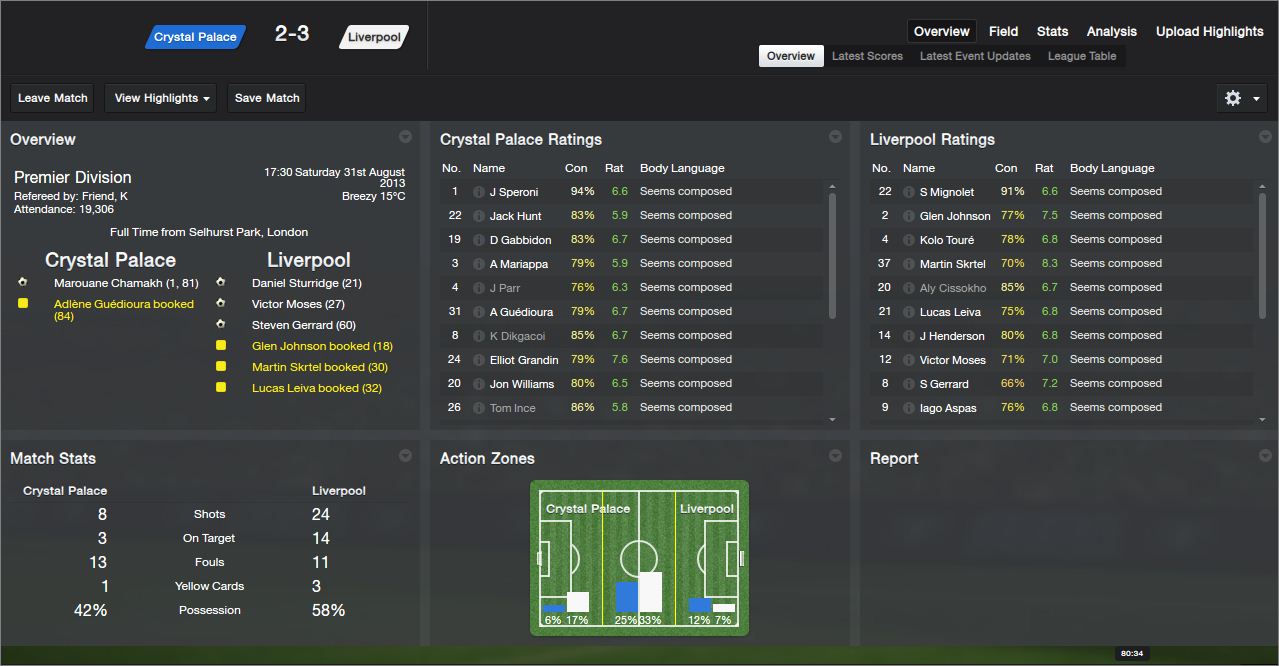 Next up were Southampton. They had managed to beat us last year , and I wasn’t going to underestimate them. I picked up a strong line up , and by decided to introduce some width into the side. Was the experiment successful ?No. 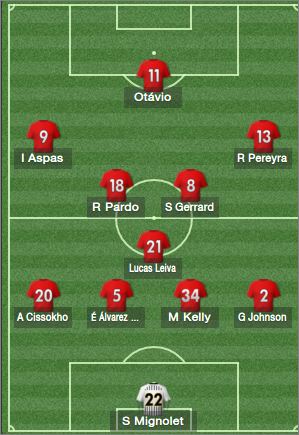 Gaston Ramirez scored one of the craziest goal I had ever seen. Even he later confessed he didn’t think that could have been a goal. Ramirez put in an early cross for Lambert who arrives late into the box and does not connect with the ball but he sure connects with the ‘keeper. Yes , he knocked down Mignolet and the ball entered the unguarded net. And Swarbrick was happy to let the goal stand. But there were more surprises left in the match. Lucas who hadn’t scored in over 2 years rescued the draw for us with a volley which even I was proud of in the 51st minute. I now understand one thing , playing with wingers isn’t simply the right thing to do in such matches. I had picked a wrong match to experiment. We will have to play to our strengths at the centre of the field. 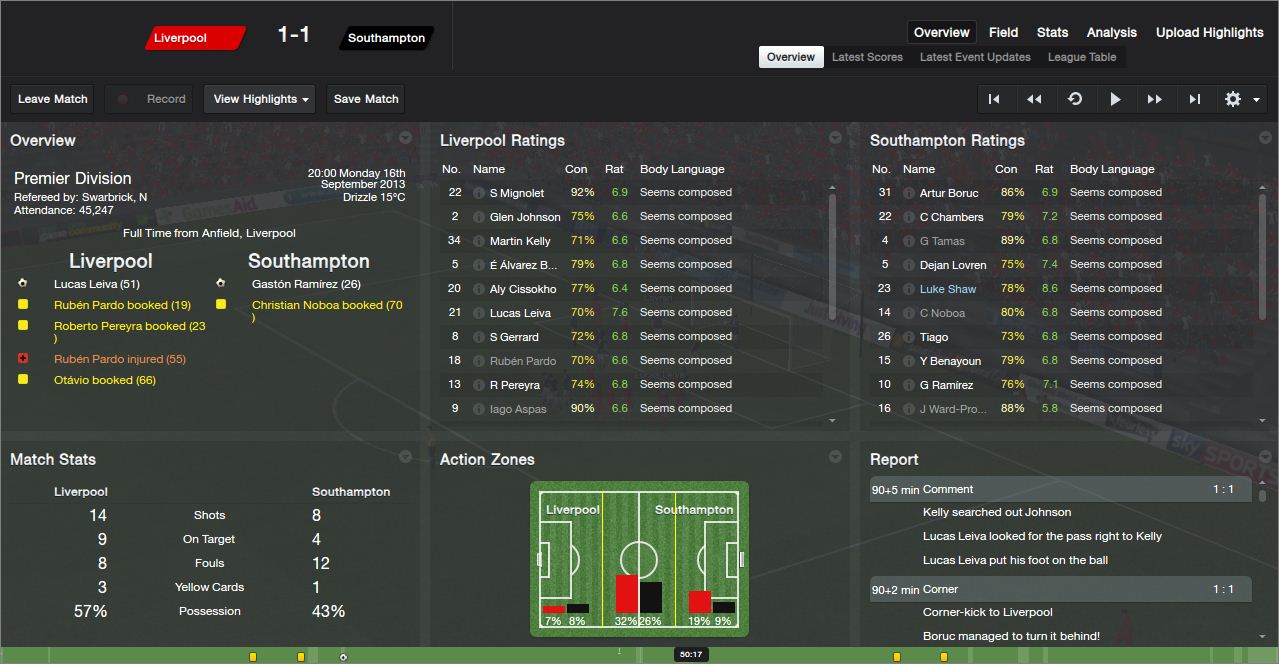 It’s quite a hectic job as a manger , but I am enjoying it. It’s like being a young player all over again. Everything seems so familiar but it isn’t. But ultimately I knew my team was playing well. Sterling put on great performance , Balanta was playing as his he had played his whole life in the Premier League and the team was respecting my ideas.

Guys , I have finally decided the layout for this story. There will be 3 matches presented as new report as in the update above this one. And there will be one update which will contain 3 – 4 matches , and they will be in form of Stevie G’s notes. So I will be able to maintain a good speed for this story while not making it just updates for results. I would like to know how you think about it , and if there is any better idea you may have. Hope you enjoy this update!
Login to Quote

Thanks Bayern !
Login to Quote

Thanks for the kind words LFC!
Login to Quote

pompeyblue
7 years
Good results and some even better updates