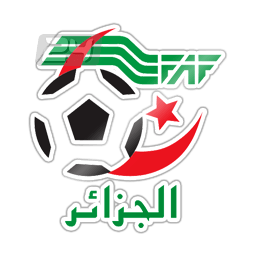 In a chance to win the 5th trophy of my beloved 14, time has come for the African Cup of Nations. I am managing the Algerian National Team and well I know I have been messing up a lot with my updates but at least I am getting results. We are drawn in Group B with Nigeria, Senegal and Gabon. We should progress from this group in all honestly, and 3 points against Gabon is vital.

A fantastic regen who was bred at WA Tlemcen in 2017. He will lead the forward line with captain and star player Ishak Belfodil.

Our star man and captain, he has it all. He has been at Inter since 2013 and he is a great player who has blossomed throughout his career, and he recently broke the Algerian all-time goalscoring record of 50, and he is at 54 now and he’s only 28 (in his prime)!

Lyes Gasmi, our star centre back at 20 years old! Believe it or not, he was bred at PSG making his debut in 2017, and having an average rating of 7.10! Not bad for a “rookie”, at the age of 17 in the Ligue 1. To come through the youth of Champions League Winners and 7-time consecutive French Champions PSG is a feat itself! He is to become an Algerian great, and with his leadership skills good at the age of 20, he will definitely be a captain in the future.

The man between the sticks, and this could probably be his last international tournament before the 2022 World Cup! I won’t be around by that time, so it’s not up to me.

Our box to box midfielder. He is in his prime and doing us wonders right now and I expect him to control the midfield along with Ryad Boudebouz, Mehdi Abeid and Riyad Mahrez.

We will be playing with a 4-4-2 formation, with a back four that all have roles in defending (avoiding going up as their stats aren’t that good in that department). Two wingers who will support the central midfielders and attack. We will have an Advanced Playmaker (Attack) and a BBM down the middle, with Hussein Al-Dossari occupying the DLF role and Ishak Belfodil as the Complete Forward. 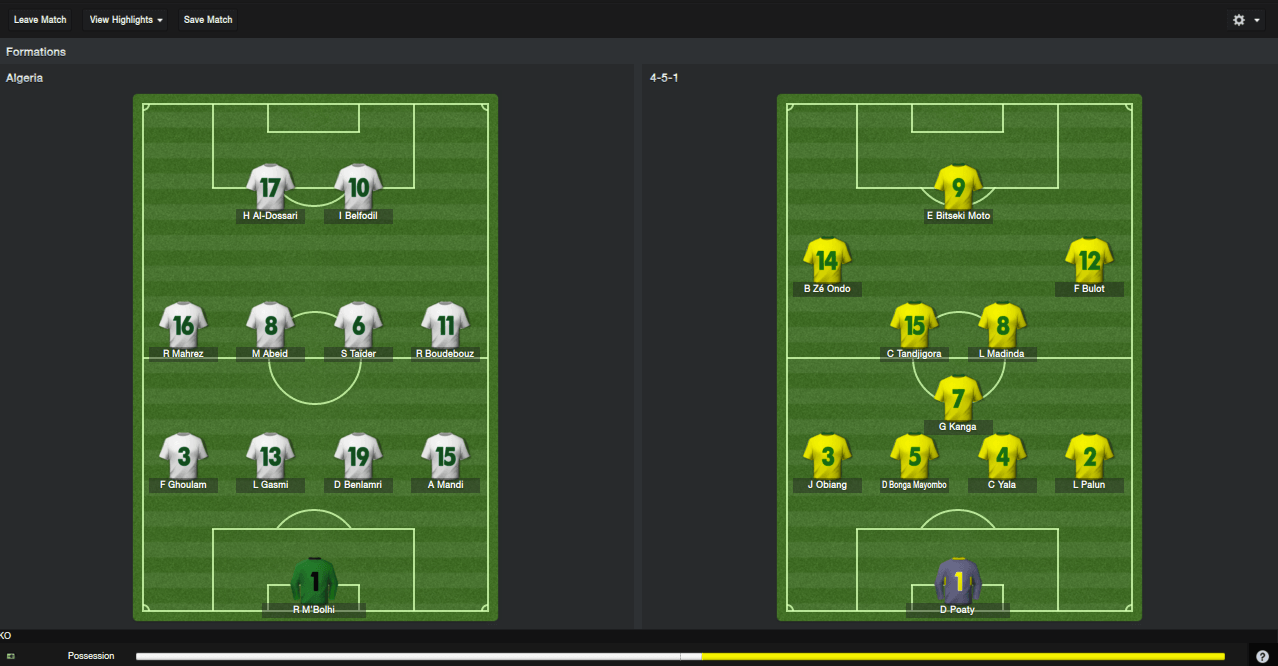 I am… baffled. 1-1? Poor. We controlled the game, even getting an early goal! It was hell in the second half, none of our shots would go on target and then their striker scored! Imagine if they had Pierre Emerick Aubameyang… it would be even worse! Nigeria and Senegal drew 2-2, meaning we have the chance to regroup and gain points in the other two games, which will be hard.

Oh my god… 0-0? Our defence was top notch again… but where are Ishak Belfodil and Hussein Al-Dossari? What is this? They are two of the best attackers in Africa, but they can’t score. Nigeria defeated Gabon 1-0, so the group is very tight right now. A 3 point gap between the top and bottom - Gabon (1 point) and Nigeria (4 points). We need a win if we want to qualify, or a very high scoring draw (if Senegal and Gabon draw).

Finally! Faouzi Ghoulam and Mehdi Abeid gave us a 2-0 lead in the first 25 minutes, and Hussein Al-Dossari got his first goal for Algeria in the best way two minutes later! They pulled it back to 3-2 but Ishak Belfodil finally showed up and scored the winner which killed the game! Senegal also beat Gabon 4-1.

We should have got top spot if we won against Gabon, so next time I will learn from my mistake of putting Overload when we are winning 1-0 in last half an hour of the game.


I think that this was a very fair draw, two Arab teams battling it out for a semi-final spot and I think they are on the same level as us. We could get a clean win but the bookies are going for a penalty shoot-out victory for either team.

Both attacking prowesses from each team were missing today… but now there is extra time and a penalty shoot-out in which we won. In all honesty, a win is a win so I am going to take it. Both teams dominated from periods of time but we ended up winning in the lottery. Next up is South Africa, where I will meet former friend Jacob Modise, and a few other enemies such as Bhongtholewu Jayiya.

A very entertaining first 20 minutes! Lyes Gasmi got his second goal for Algeria in the process, and we ended up battling it out on penalties… and we reach the Final! The whole of Algeria is ecstatic and we prove the surprise package!

We changed the formation around this time, due to injuries to the likes of Ryad Boudebouz, Yacine Brahimi and others. Will it help us score more goals?

Yes, yes it did. ALGERIA ARE THE AFRICAN CHAMPIONS!

I actually had fun in Africa, as I did also in FM13 with Mali. Hopefully, I can move on to Asia now (club-wise) and move on to the Americas country-wise.

5 Trophies Down, 7 more to go!
Login to Quote

MJK46
9 years
Congrats on the win. Great to see you doing well in the challenge as well.
1
Login to Quote

Jorks
9 years
What are the most surprising transfers?
Login to Quote 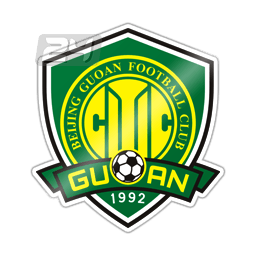 Finally, we reach Asia. Beijing finished in the top 3 last season, meaning they qualified for the Asian Champions League for this season. Their best performance was reaching the second round on a couple of occasions. I am aiming to take Beijing to the top and defeat rivals Guangzhou and Jiangsu, and be competitive in the ACL.

Our squad is good, but we don’t have a lot of depth. There are 4-5 positions that need depth - GK, DC, DL/DR, DM, and AMC - so hopefully a few key players will be coming in, I also have to watch out for the 5 Foreign Players Rule.

Although… this squad has bags of potential! We have good scouts and coaches with good JPA/JPP stats so in 2-3 years I think we will have definitely won the coveted Asian Champions League! 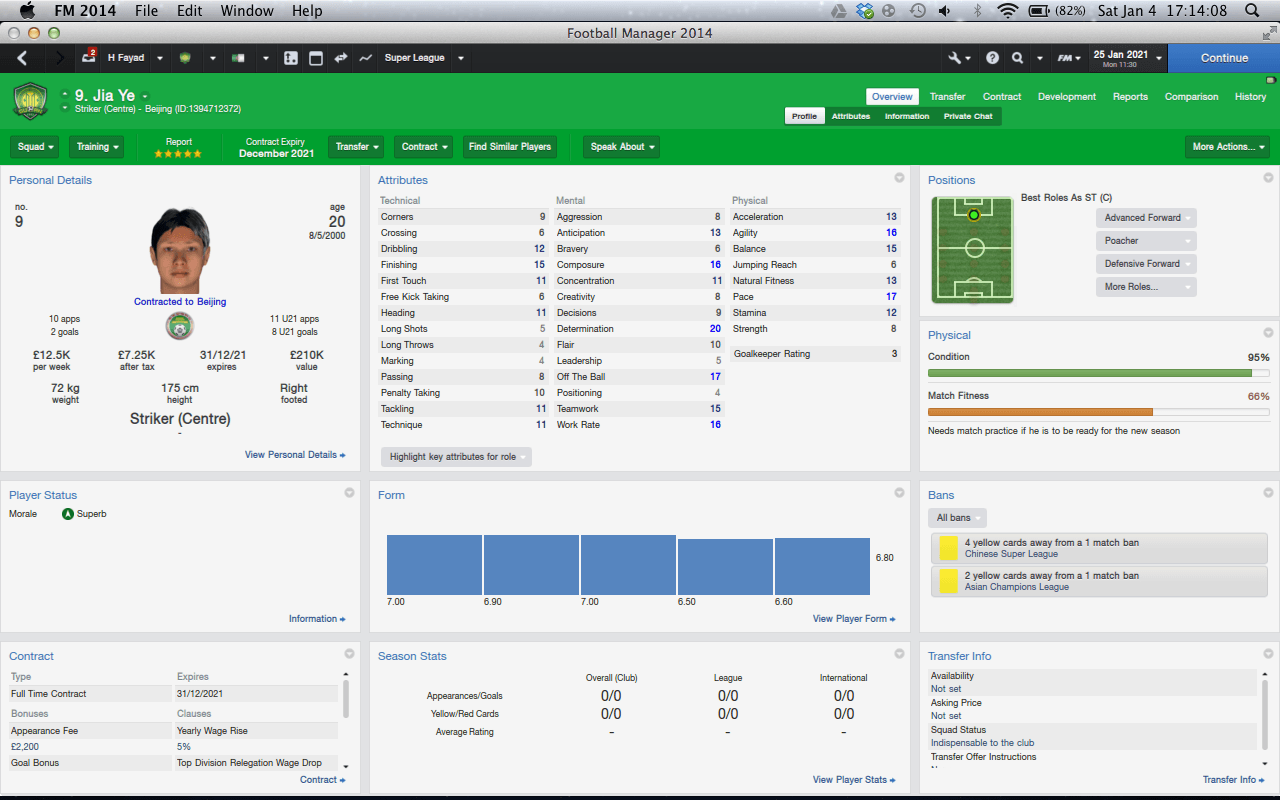 Wow. In the Chinese League… this player will become massive. Look at his stats! Positioning will be something I am going to work on, but other than that for a 20-year old he is unreal! 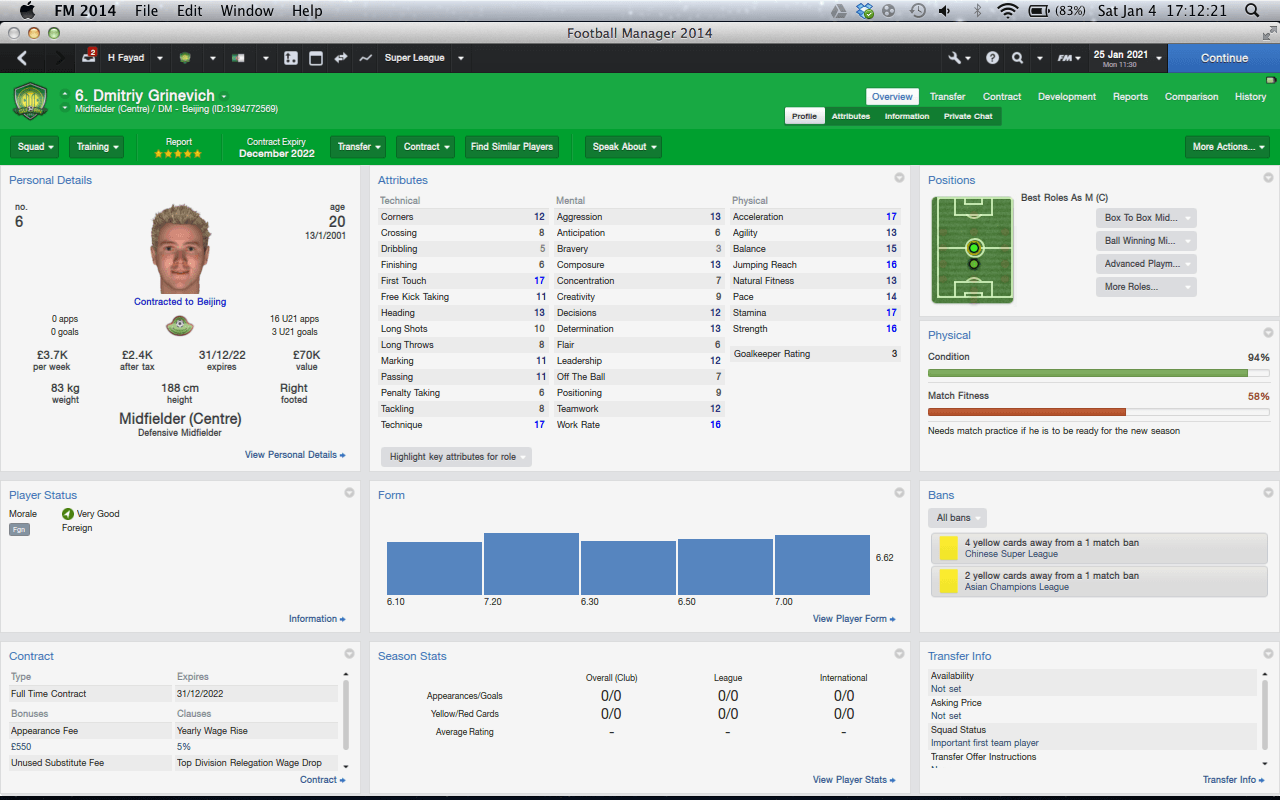 Our Belarusian. He looks great and I expect him to shine in our midfield, so watch out for me to mention him in the near future.

Reaction to my Appointment

HamoudiLFC
9 years
@Jorks I will check on that mate!
Login to Quote


I have officially lost interest in this story. I completed my last season and before I left to Europe, I saved the game and I… quit. I had a fantastic season in China and I had fun, but I just wasn’t having fun about the save itself. Maybe I will comeback one day. 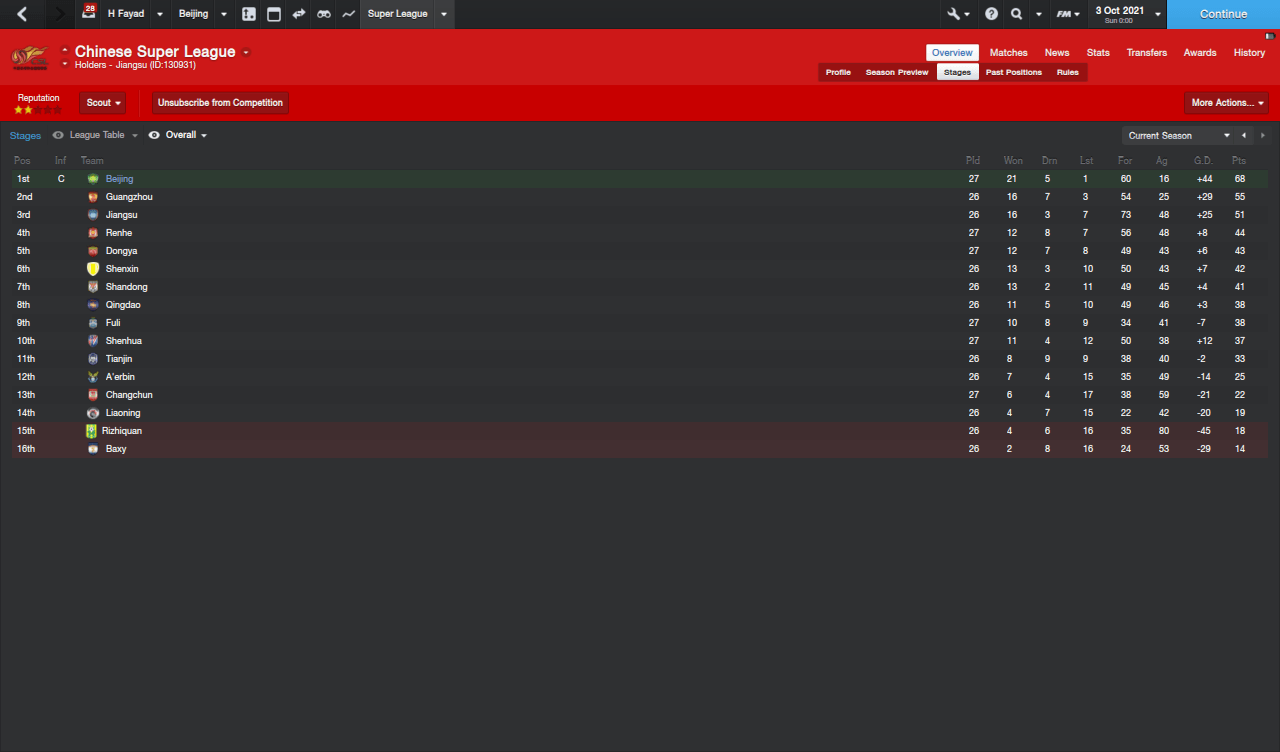 We won the Chinese Super League with ease and the fans were ecstatic. 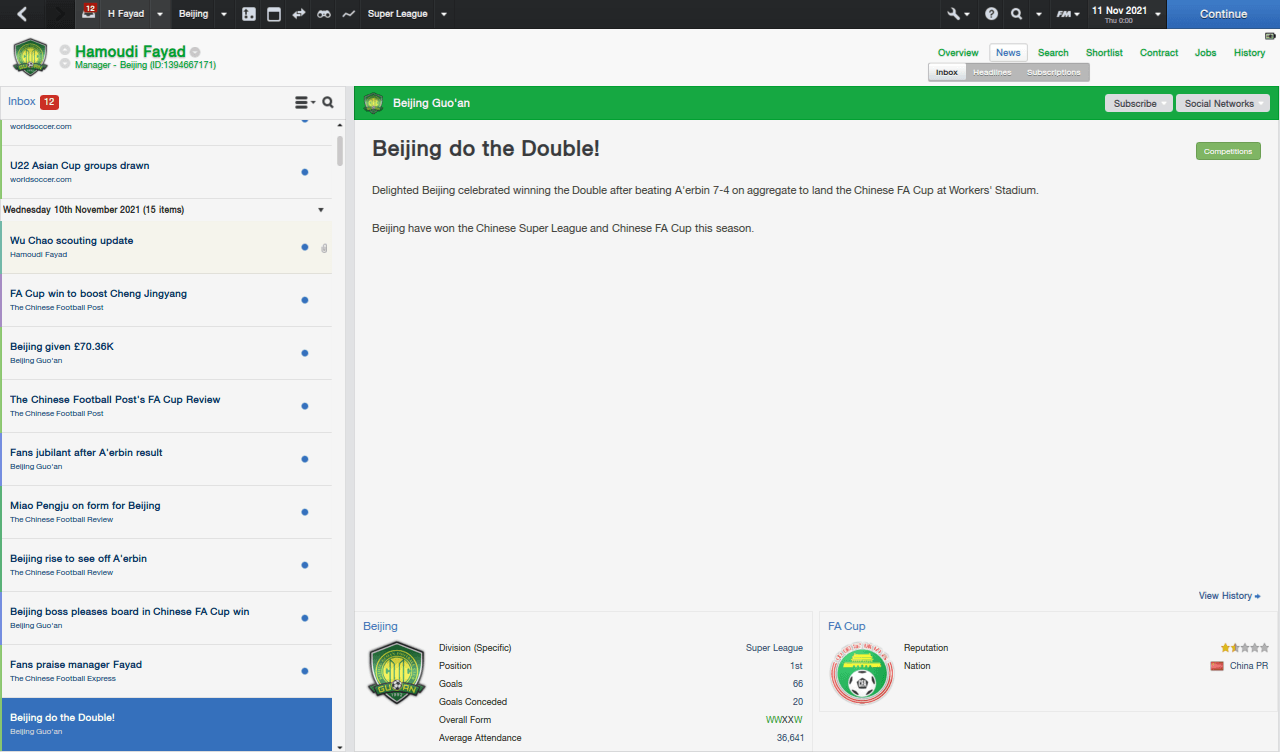 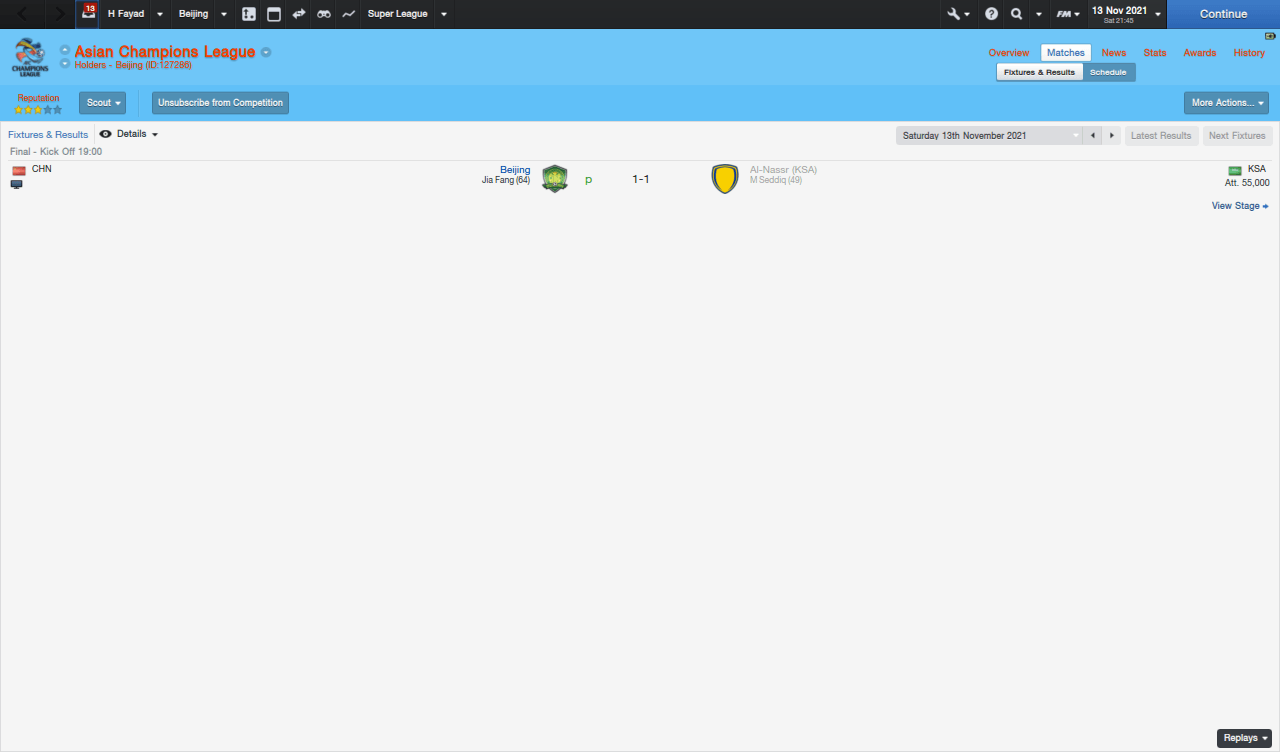 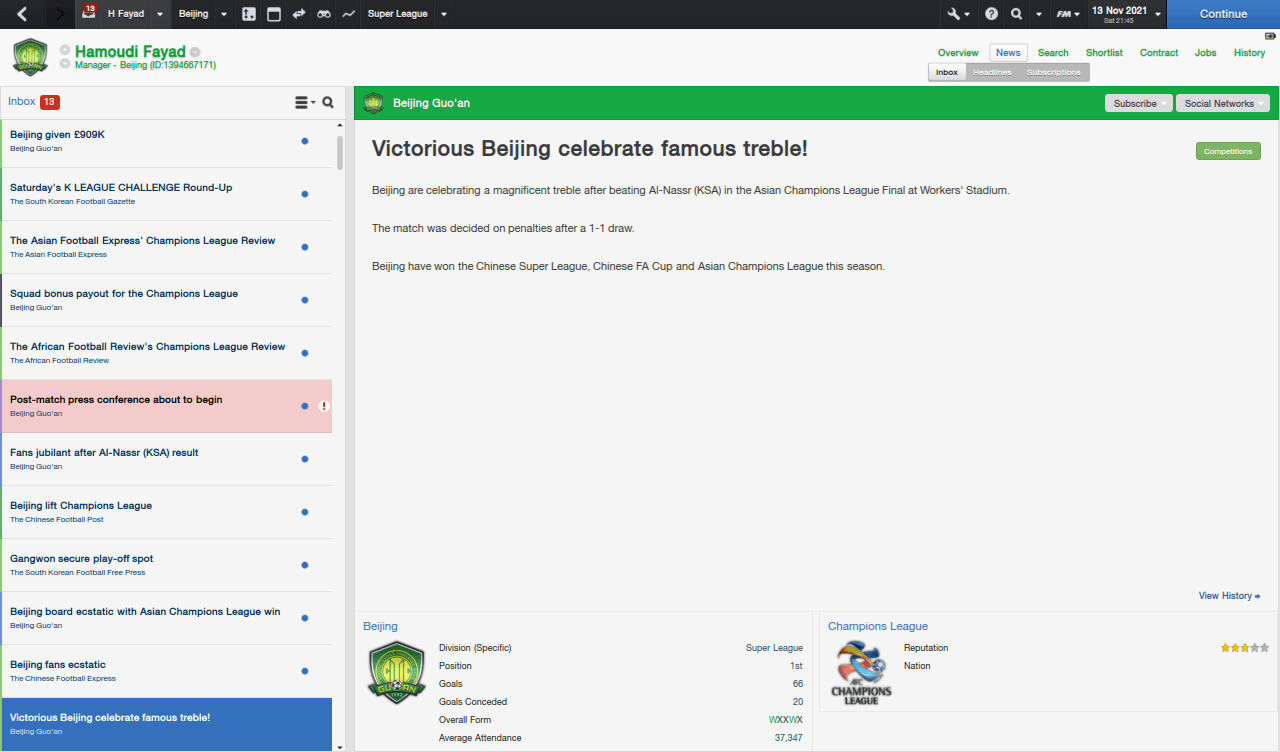 We completed ⅘ of the Pentagon Challenge leaving only Europe out. If I had the desire, I would possibly complete this challenge… but that is for another day. 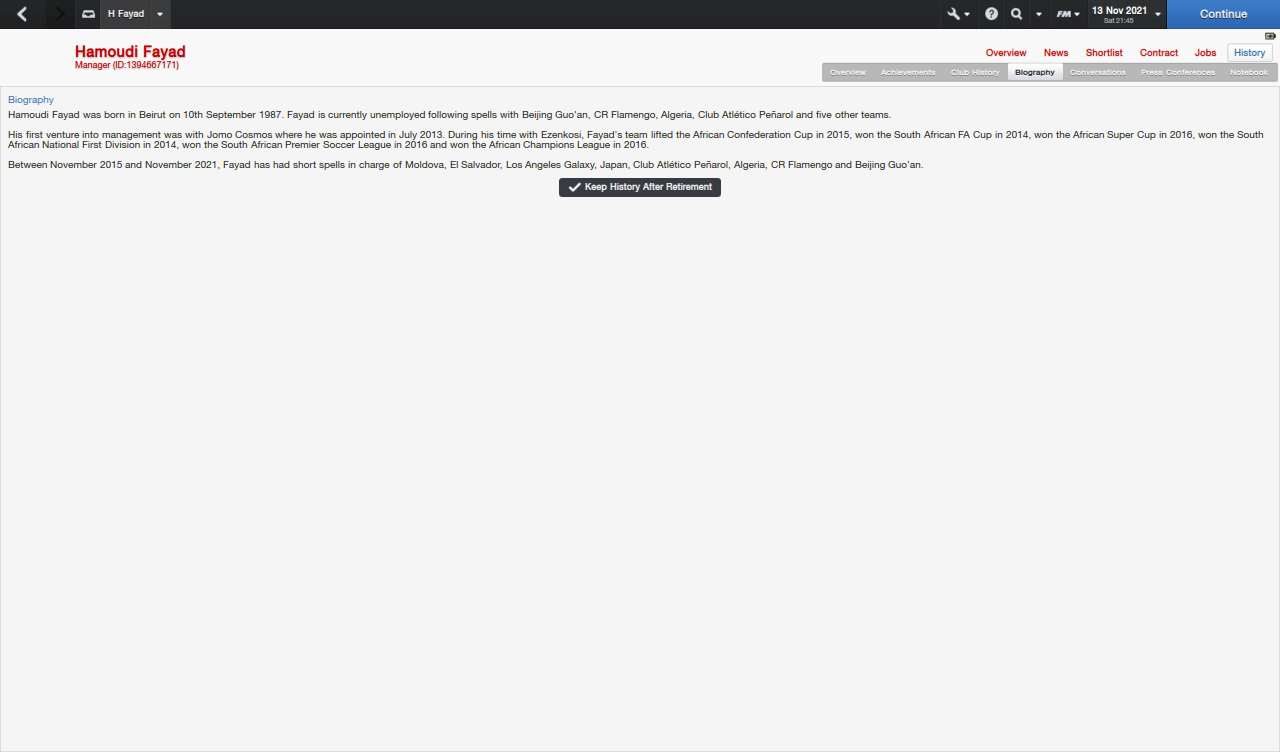 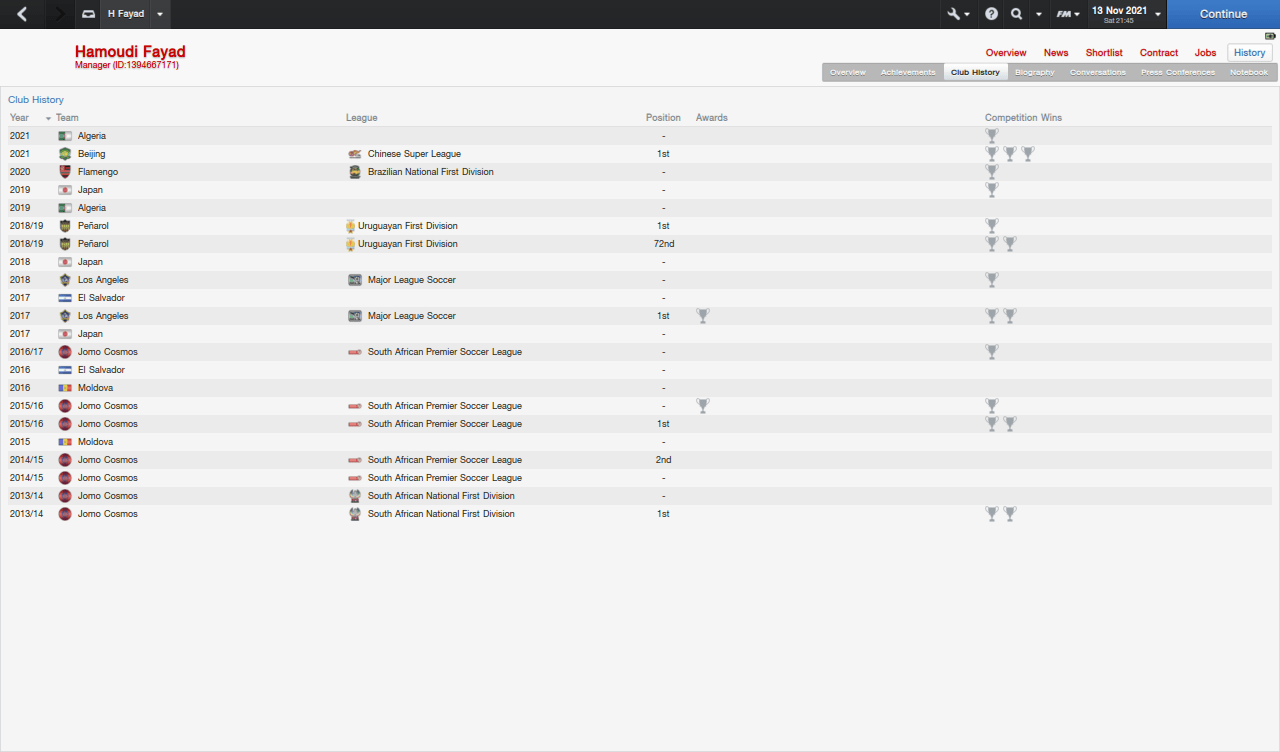 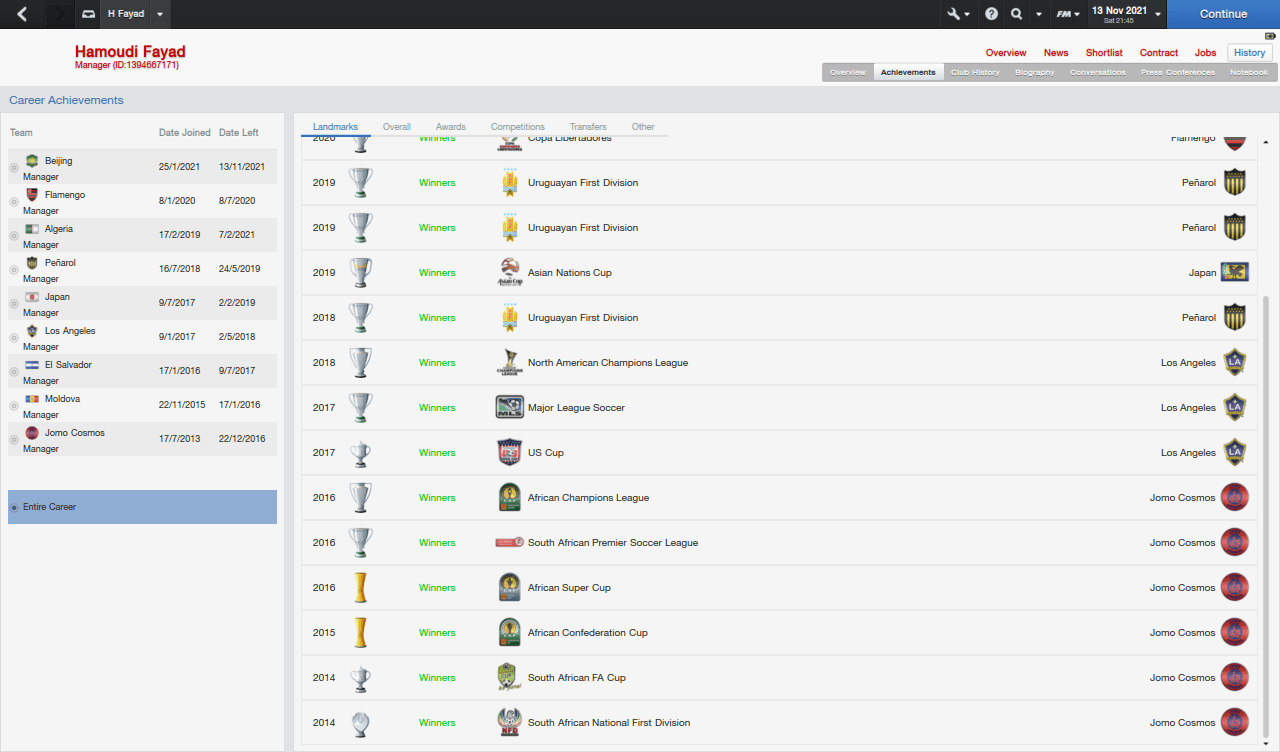 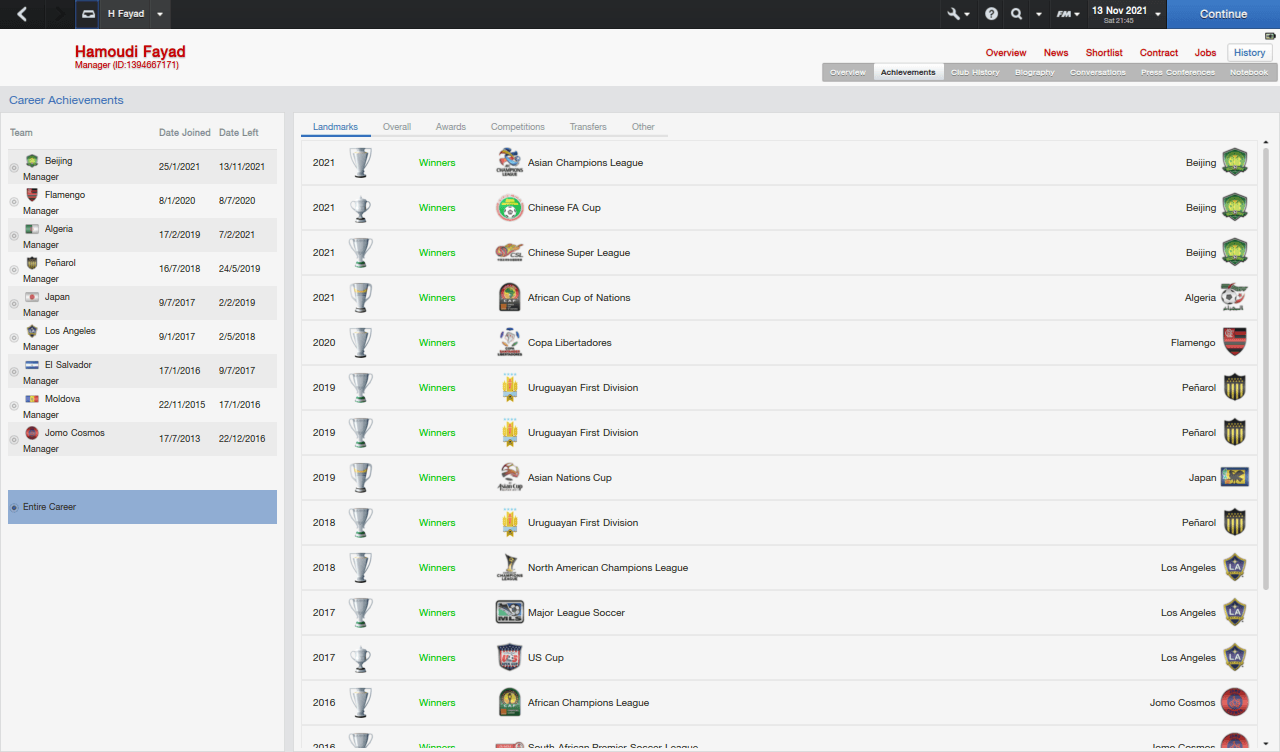 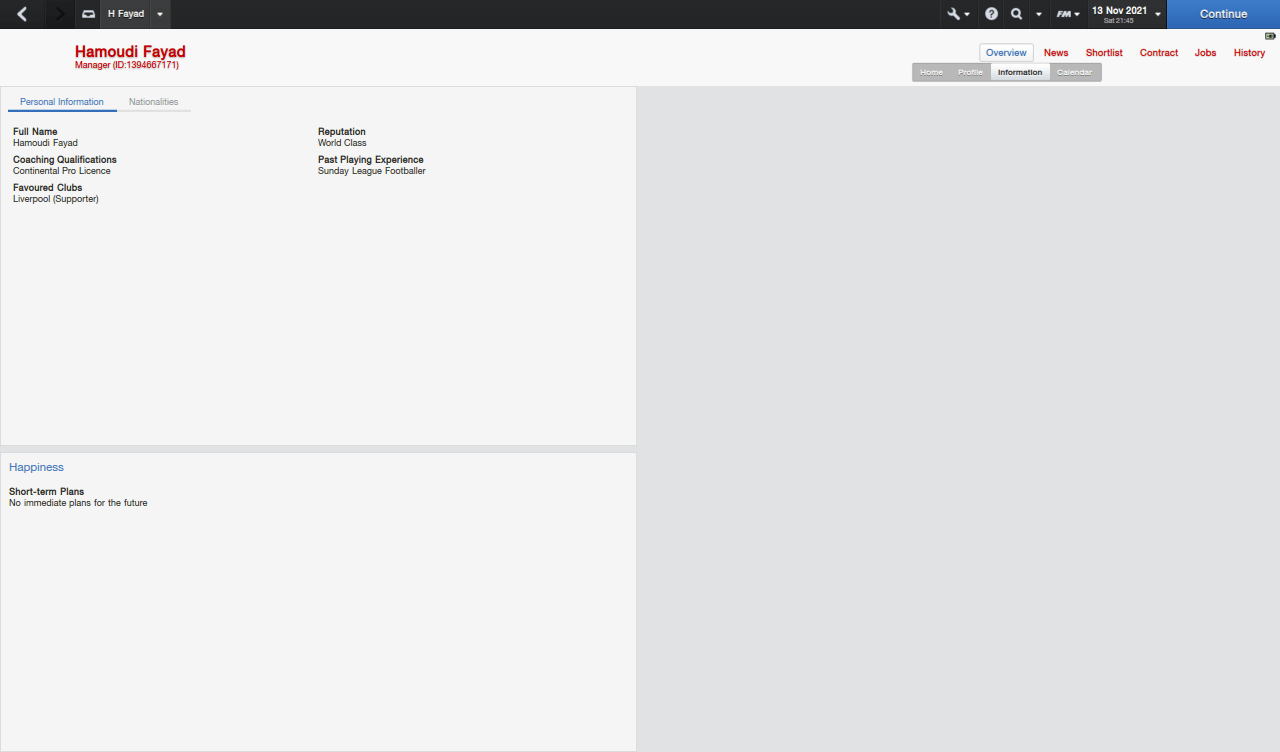 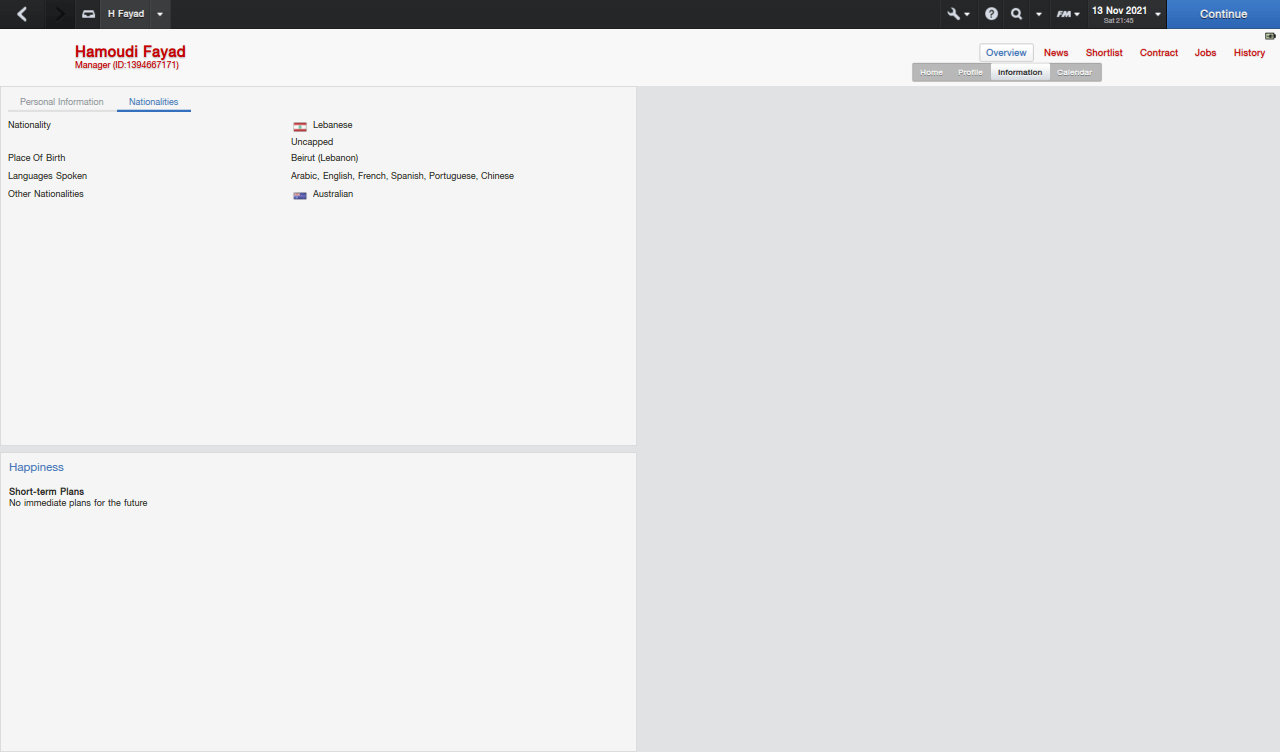 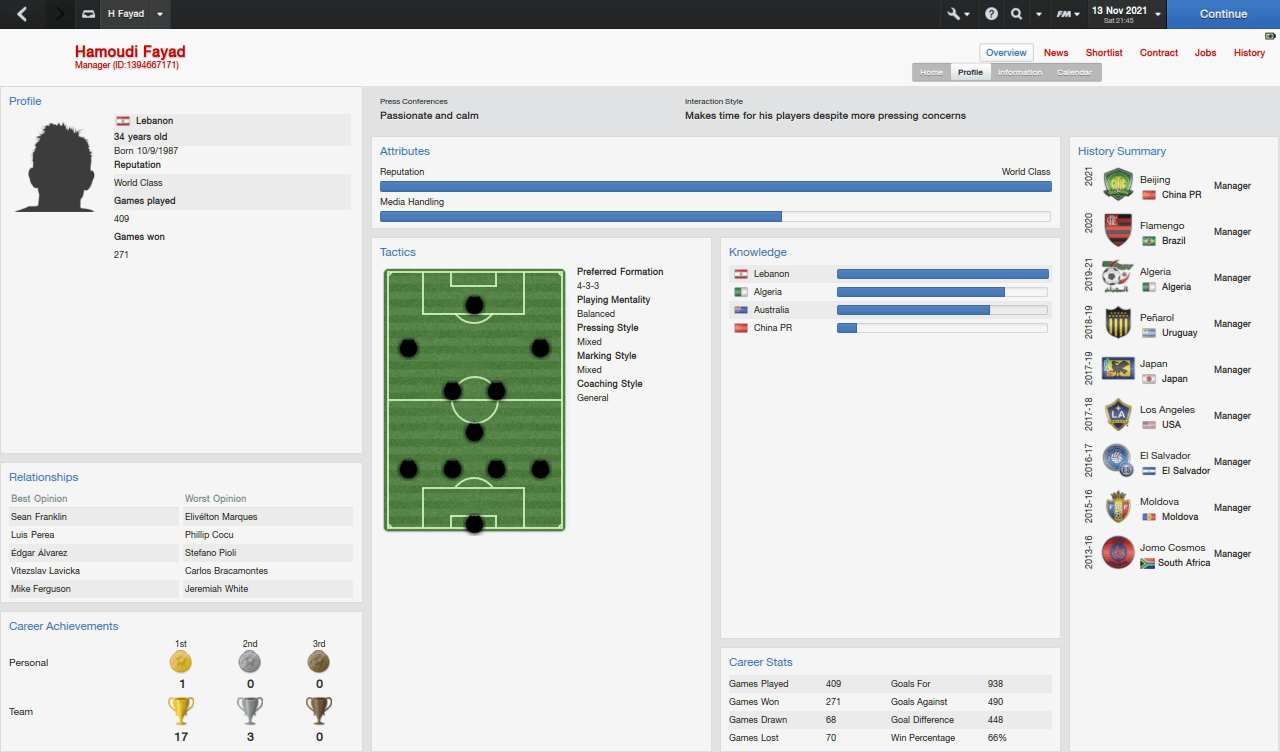 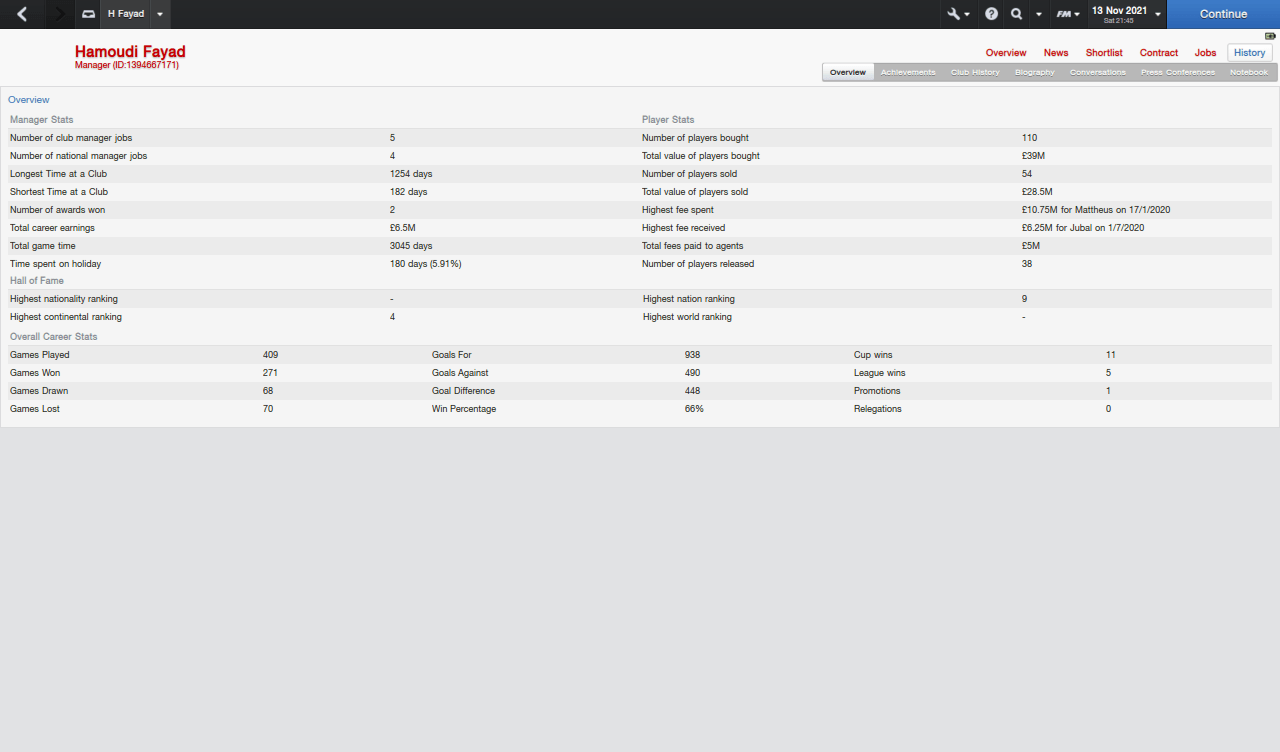 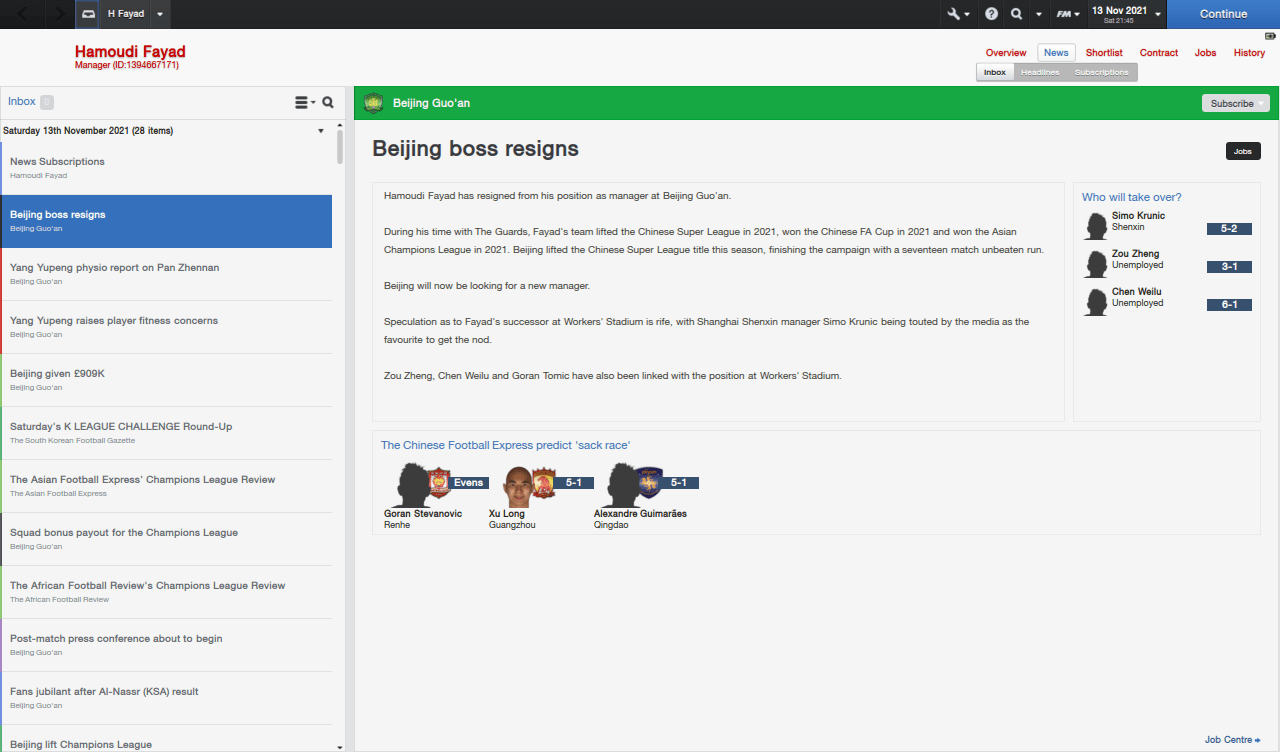 Thank you to all who read my story. I have a new save in mind, so expect an update - today or tomorrow. Thank you again, and it was great writing for you guys

HamoudiLFC
9 years
I may continue but only to win the UCL, I don't have that much time to win the international trophies 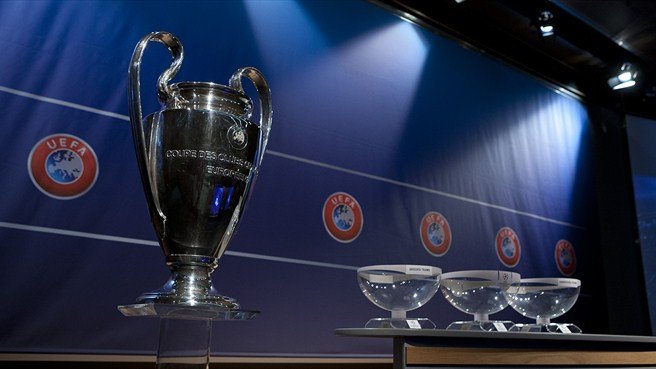 Well… I am back. Hamoudi Fayad is back after a hiatus. Well, not really. I’ve been living in Romania and I have been managing their national team for a year now but we haven’t played a game yet… so basically it has been a break for me. I won the Champions Leagues in Africa, Asia, North and South America and I am back to win it in Europe - along with other international trophies that I haven’t won (South and North America + Europe and Oceania).

Someone called me. His name was Eduardo Garrone. Italian guy, he was nice. He wanted to meet up with me to discuss “footballing business”. I found out that he was the Chairman of Sampdoria…

A chance to work in Italy… could it work?

Well, here’s what i’ve gathered up on this team. They finished 3rd last season which means they qualify for the Champions League Group Stage. Although they finished 14 points behind 2nd placed Milan which needs improving. Since 2013, they have been stuck between 12th and 18th, getting relegated once in the process and immediately coming back up. A shocking overachieving season in what was the last season for manager Delio Rossi - saw them go up to 3rd.

EG - Bonguornio Hamoudi! Welcome. How are you? Do you like Italia, or still you have not seen more?

HF - I have seen enough and i’ve been here quite a lot before. This is beautiful. Let’s sit down, and drink some coffee.

EG - Ah! Yes! Now you see mon amigo (isn’t he Italian…), Delio Rossi make a shocking position for us last season. Perfect. But what is not perfect that he retire! I need new manager. I watch you before. Players here know you. They want you. We need someone experience in Champions League… you do not have experience in Europe, but I mean you won it in 4 other continents… The players! I talk to them, they like idea! … 40.5k per week? You will start managing today and I will take you to the training ground. We can discuss our goals and shiznick now!

HF - Wow Eduardo. I am flattered mate! Without a doubt I will join! I will try to consolidate the club in the top 4 in the next few years, and I will want to win the Champions League one day with this club. Now… you know I am a fan of young players and possession football…-

EG - Sorry Hamoudi… I am not a fan of youth breeding. You can buy young players but I will not spend money on facilities. I prefer also if you play direct football…

HF - Well honestly I will try my best. I can’t promise anything, but I can promise you winning games with whichever style of play.

EG - Perfect! 20M transfer budget sound good? Of course it does! Give me a hug mon amigo!

I guess, that was that… 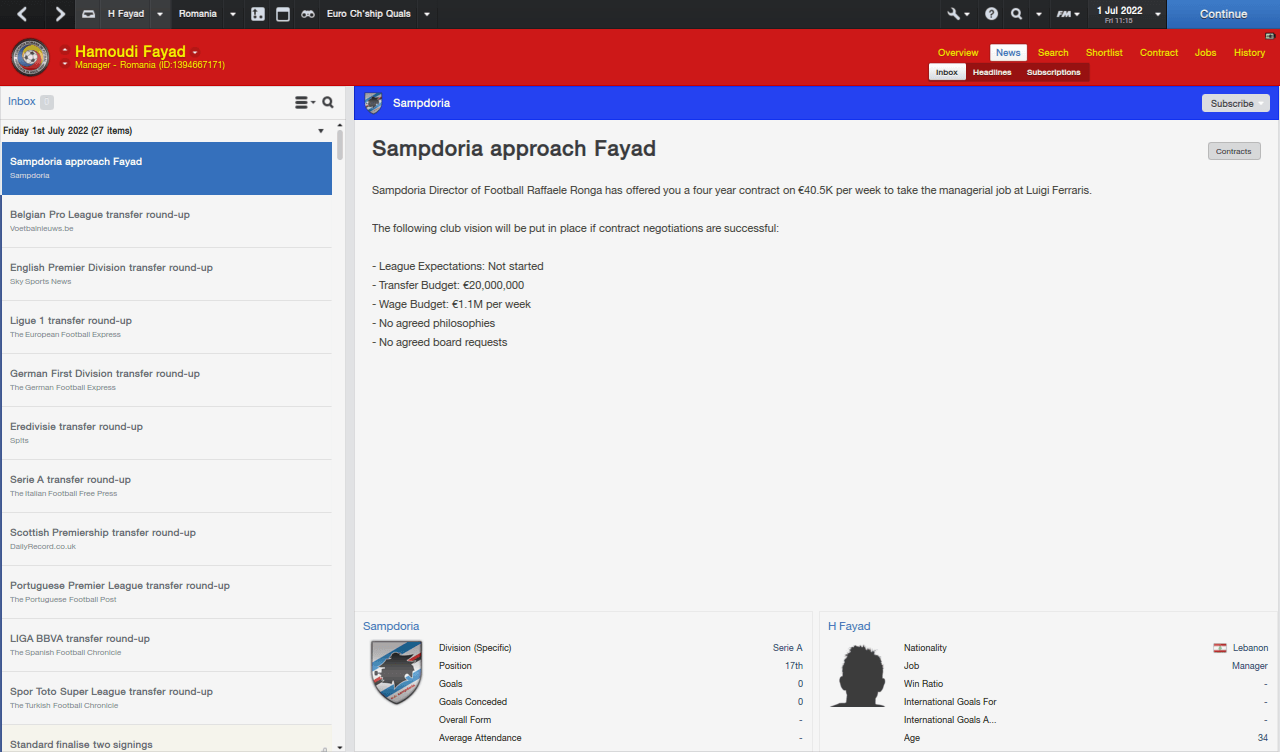 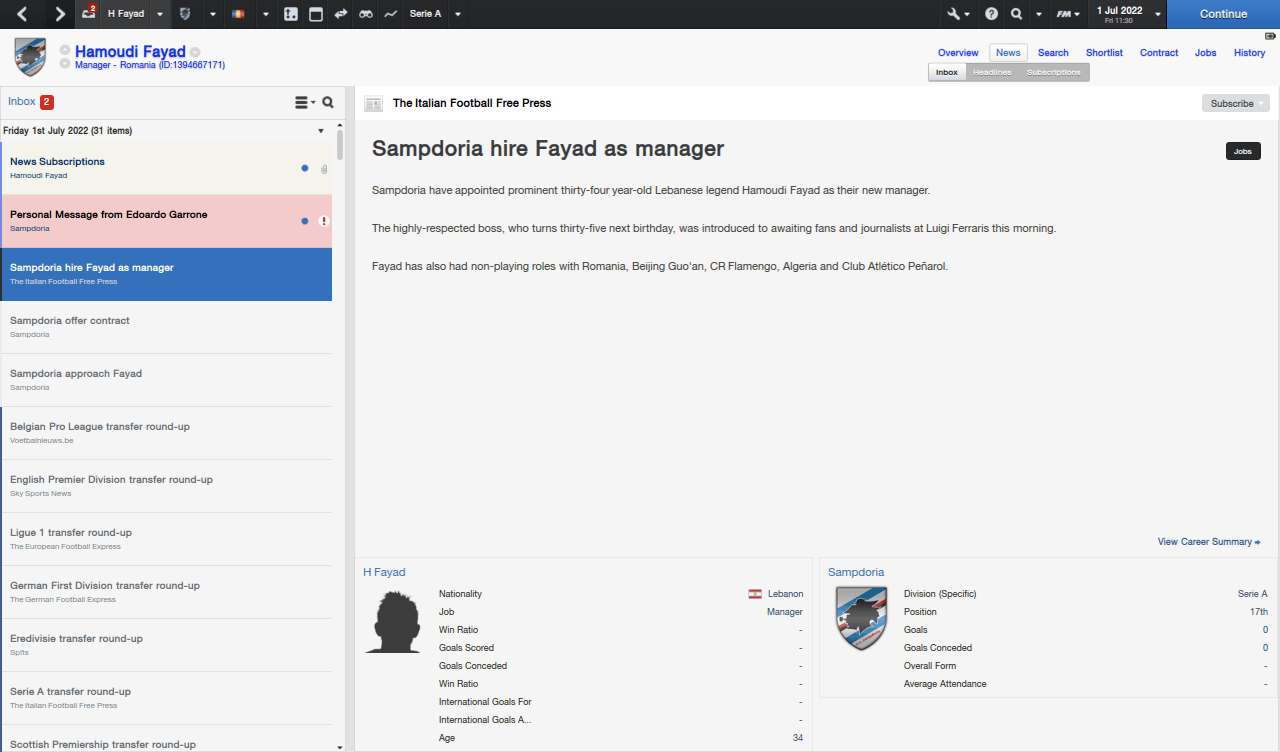 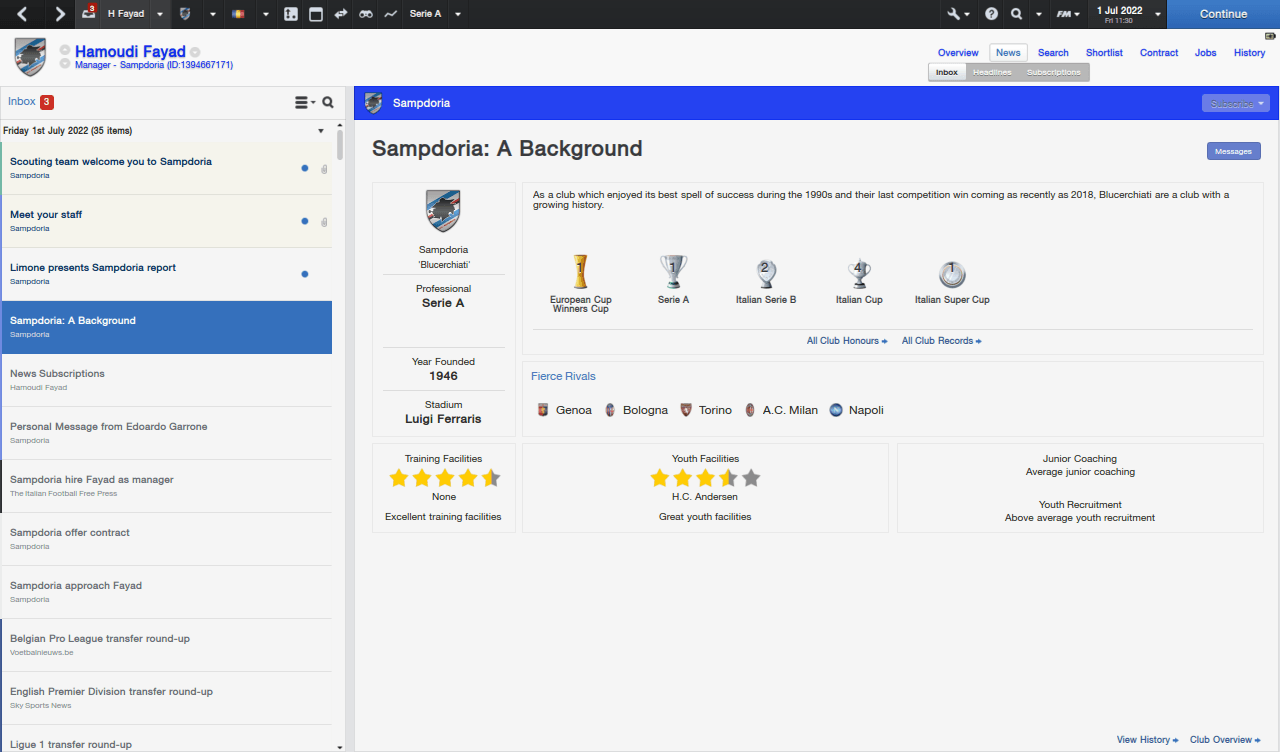