Good one. That made me lol.
Login to Quote

The-forgotten-one
8 years
Conrgats!... I've never actually managed a national side before... sure would be interesting though.
1
Login to Quote

Will definitely be following more closely from now on - keep it up!
1
Login to Quote

Edit: Nasri and Mangala will be out due to injury so Ablam Kokougan and Laurent Koscielny will be the replacements.
Login to Quote

Days before Gagné's first match as national team manager, Dijon chairman Oliver Delcourt has finally broke his silence about his manager also taking up the national team post. It is what many were expecting but there was something more.

"I am disappointed that Marc-Édouard took the job with France even thought it is a grad opportunity, I am worried he will get too swamped with two things going on at once, especially since the FFF is very demanding." Later on Delcourt said, "I have given him a chance to stay with Dijon after this season, Marc-Édouard will have to at least make Champions League to keep his Dijon post."

It seems like things are getting interesting in the Dijon camp. Will Gagné be able to stay with his club or will the added pressure of Delcourt's statement cause him to lose focus? Stay tuned to find out.

Dijon FCO are currently in fourth place in Ligue 1 and have qualified for the next round of Europa League.
Login to Quote

The month was really good for us except for the loss against Montpellier. I can take the blame for that due to having to arrive to the game a bit late due to my press conference in Paris. I honestly wish they would have let me do it in Dijon. Overall I am very pleased with Lu Jingjun, dude has been a beast and scored a few goals and is second in the league in assist. On the international front I was happy to win the first friendly match. We beat Portugal 1-0.

From the announcement of the chairman, I am not at all worried, I see what he wants and I will deliver. After all it's a business and he knows his priorities. I am not worried that I might lose my job because I know he will trust me. The only issue is the summer with Euro and the transfers. At least the games are in France so I can still easily work.

France was seeded as part of the first seed in the draw for Euro 2016. It looks like it will be an easy group as they draw, Greece, Austria and Serbia. Greece might be the only country in that group to challenge the French but the FFF is feeling really good about the draw. 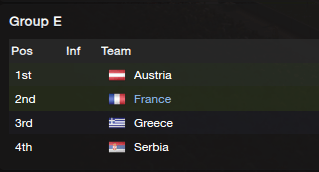 Recently in the debut match of Marc-Édouard Gagné we saw a really good French side play Portugal. We got to see the famous 4-2-3-1 that Gagné uses with Dijon. It worked perfectly as France won the match 1-0. The counter attack was the most impressive part to the French game plan. It is unknown when the next friendly will be but we can't wait to see what they will do next. In September of 2016 France's road to the 2018 World Cup begins as they face Romania, Denmark, Moldova, Slovenia and Andorra in Group 5 action.
Login to Quote

Verdinho
8 years
Just had a major catch up. Great season again so far for Dijon. Keep it up

The last month of the year was perfect for us. Now we never lost a match but there were a few very close ones and a few comeback. I was not at all upset and have a good feeling about winning the league right now.

The first match against OL was amazing since 16 year old Bilel Amirouche made his debut and score. The young defender looks like a gem and can't wait to see what he does in the future. FYI he was just used as a replacement due to injuries. Next up we would beat Reims 3-0 beforet he final match in Europa League Group Stage.

The match against Fenerbahçe in the group stage was very special. With that victory we won all games except one. The only non win was a draw against them earlier in the fall. Lu Jingjun was the man of the match. He scored a goal and created an assist. What a steal honestly, Porto are idiots for letting him go on a free.

The final two matches of the month were pretty good before Christmas Break. First we faced Reims again in the Coupe de la Ligue. We won in a penalty shoot out. My god we were close to losing and I am happy, next up ASSE in the quarterfinal. The last Ligue 1 match of the year was a draw against Rennais. Thanks to Paolo (De Ceglie) was the savior with the game tying goal in the 81st minute.

The new year started off with a bang. The month saw two major cup victories as we advanced from the Coupe de France 9th Round and the Coupe de la Ligue Quarter Final. Very pleased with the guys right now. Only one point from the first spot. I can feel it getting first very soon. PSG are starting to crap out a bit and we are very strong right now. With that I did not buy any new players or sell anyone because I felt that a change in players could hurt the good vibe. In Ligue 1 play we kept winning. The best victory was the comeback against Monaco.

Dijon FCO return to the final

Goal-friendly Evian TG FC suffered a 4-1 defeat against Dijon on a cold wet evening at the Parc des Sports. With the victory Dijon return to the Coupe de la Ligue final.


Things did not go as planed for Evian as striker Victor Andrade seized on an error by Dan Nistor to score an executed finish. Andrade would score his second goal of the match with a chip from about 20 meters out in the 24th minute


Later on in the 49th minute Andrade's name would be announced again. He scored off a breakaway and shot from 18 meters out. This would be a hatrick for the Brazilian who came in soon after Ademilson's departure a few years back. Ademilson who??


As the score was 3-0 Evian were very desperate for a goal as the clock was winding down. They would answer during the 66th minute as Leonardo scored their one and only goal. Was it enough??


Dijon would answer Leonardo's goal. Thanks to an error by Djakaridja Kone, Andrade scored goal number four during the 76th minute.


The current champions will be traveling back to Paris on the 19th of April. They will be facing fourth placed FC Lorient. This will be their second final appearance. Back in 2002 they lost to Girondins de Bordeaux.
Login to Quote

You are reading "The Gagné Chronicles Episode II: For Club and Country".