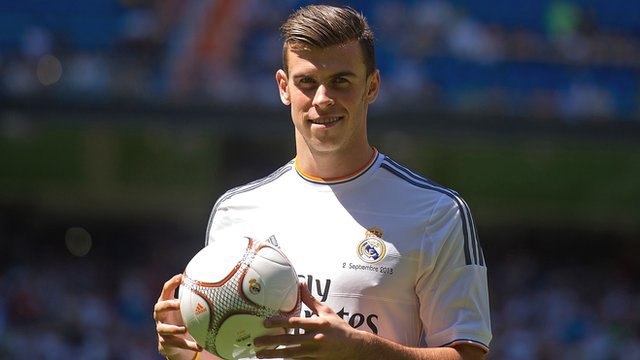 After missing the first six weeks of his Real Madrid career, the worlds' most expensive ever player, Gareth Bale, has returned to full fitness and is ready to take on Villareal in the clubs next match. Lars Bender will also be making his debut at some point during this month [September] but all eyes will be on Bale's performances, to see whether the €100 million man was worth his fee.


After suffering a grievance to his foot within the first few days of arriving at the club, many fans were disappointed, as the injury meant they would have to wait to see their new man in action. The former Spurs player, who began his career at Southampton, was received warmly during a welcoming celebration, just days before picking up the injury.


"The Welsh Wizard" has been capped 41 times by his country and has told reporters that he is keen to show what he has to offer to the Spanish giants. Following their brilliant start to the league campaign, including a 5-0 victory over Real Betis, in which Cristiano Ronaldo scored all of the goals. Many are wondering where Bale will fit in with the team playing so well, but van Nistelrooy has promised the winger a place in the squad that will face Villareal in the next league game, much to the delight of Bale.

In other news coming out of the club, that will be common knowledge to many, seeing as the transfer deadline has passed, but to those who do not know, Sergio Ramos' agent has told Spanish media source Marca that no approach was made for his client, despite the reported interest from Manchester City. 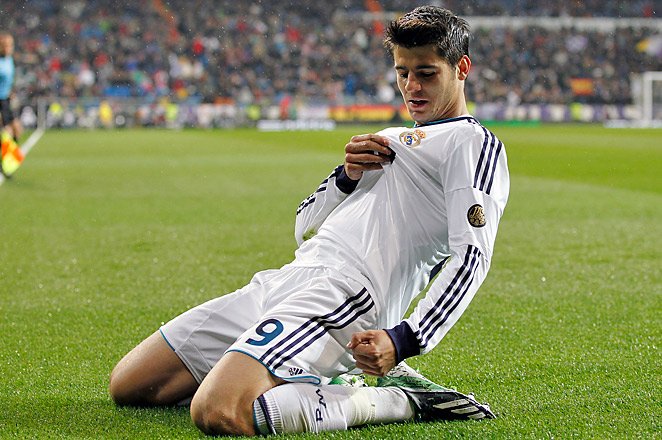 In what is a late announcement from the club, Lyon have confirmed the loan signing of Álvaro Morata from Real Madrid C.F.. The deal will last until the end of the current season, with Real Madrid paying the entirety of the Spanish strikers' wages during his stay with Les Gones.


No fee has been involved in the loan, but Real Madrid have the option to recall Morata in the Winter transfer window if they choose, should they be having an injury crisis, for example. Morata is tipped as one of Europe's greatest young talents, and his development will only be helped during his stay with our club.

The managers of each of the clubs had wanted to keep the deal private until the transfer deadline had passed. Morata has made 14 league starts so far during his career with Madrid, and his future with Los Blancos look bright.
Login to Quote 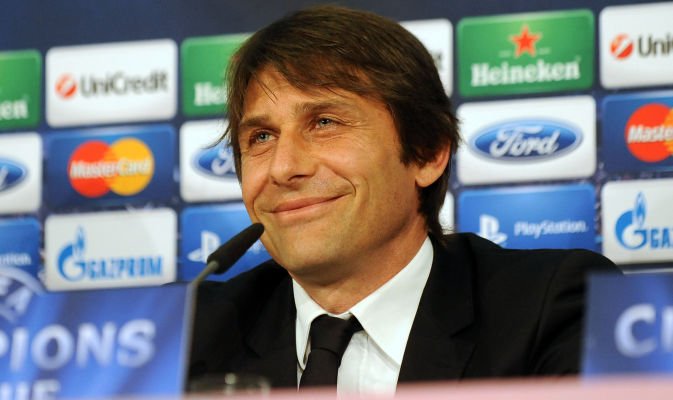 On the eve of his sides highly anticipated UEFA Champions League clash with Real Madrid, Juventus manager Antonio Conte has labelled the opposing teams' fullback, Sergio Ramos, as "the player who can inspire his team" and also praised the transfer rumour victims' recent performances for his club.


Footballing pundits have questioned whether his words were genuine, and some even made the prediction that, if they were, the Spaniard, who was a reported transfer target for Manchester City during the transfer window, could be on Conte's shopping list in the near future. However, others have speculated that the Italian could be playing mind games to try and put pressure onto Ramos.

The game tomorrow has been talked about for weeks, since the UEFA Champions League groups were drawn, and with everyone keen to get a good result to push them ahead of their competition rivals, we should be in store for a mouthwatering tie.
Login to Quote

After an impressive opening month, in which they picked up maximum points from their first three games, Real Madrid headed into September full of confidence, with league games this month against Villarreal, Getafe, Elche and a derby game against Atlético Madrid. They also kicked off their UEFA Champions League campaign with a tricky tie away to Italian giants Juventus. 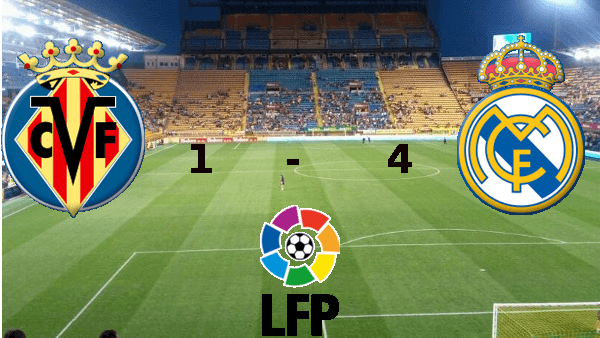 
After the international break had finished, Real Madrid headed into their first league game of the month against Villarreal at El Madrigal. Lars Bender made his debut, after his move from Bayer Leverkusen, but all eyes were fixed on another debutant - Gareth Bale. The worlds' most expensive player had made his recovery from injury, and was chosen in the starting lineup. Los Blancos opened the scoring early in the first half, when Argentinian winger Ángel di María received a short pass from Bender on the edge of the penalty area. He danced by a challenge of a defender, before unleashing a thunderous drive which nestled into the top corner. It truly was an amazing effort.

Less than a minute later, the lead was doubled. This time, vice-captain Xabi Alonso netting the goal. A cross from the "Welsh Wizard" Bale found Cristiano Ronaldo in space inside the box, but his shot was parried, only into the path of Alonso, however, who only just managed to find the net - the attempted clearance on the goal line from Pantic inadvertently helping the ball into the net. They went 3-0 ahead before half time, when Isco perfectly planted a ball onto Raphaël Varane's head, and the ball floated effortlessly into the top corner.


Villarreal pulled one back after half time when Jaume Costa's brilliant run resulted in a cross towards youngster Moi Gómez, who smashed the ball at goal. Iker Casillas, who had been practically untroubled all game, threw a hand out to try to stop the ball, but ultimately, the shot was struck with too much power. The three goal deficit was restored late on, when Isco's fantastic chipped ball found the run of Di María, whose touch brilliantly brought the ball around both the remaining defender, and the goalkeeper, and he ended up slotting into an open net for his second. Attendance: 20,403. 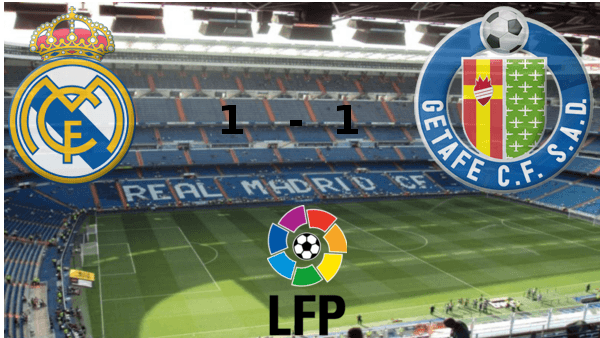 
After demolishing Villarreal in their away trip, Real Madrid played host to Getafe in their second league match of September. Things started well for the Spanish giants, as French striker Karim Benzema scored the first goal of the game before the ten minute mark, when Cristiano Ronaldo took the ball out to the wing and crossed towards him. From a tight angle, he fired across the face of goal to put his side 1-0 up. Before half tim, Getafe were down to 10 men. Lisandro López hacked down Luka Modric with two feet, earning him a red card. Things should have been easy from here for Madrid, but after half time, ex-Madrid player, Pedro León, scored a freak goal to tie things up, with a freekick from 50 yards out. Attendance: 77,641. 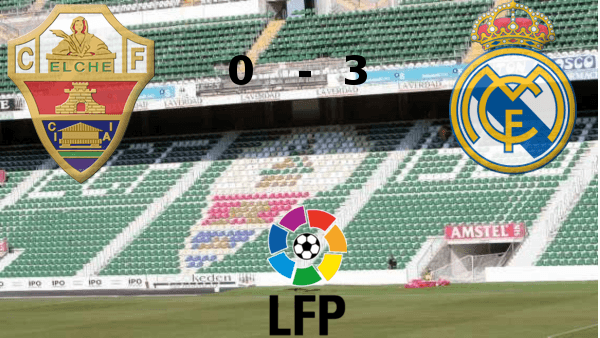 
With the disappointment of the previous games' draw fresh in their minds, Real Madrid were on the road again, this time, a trip to relegation tipped Elche. And soon enough, they began to celebrate, perhaps prematurely, following the events of the previous match, when Ángel di María, who had been in hot form this month, added to his goal tally. The Argentinian winger scored his third league goal of September eight minutes in, with a lot of good fortune. Following a pass from Nacho, he hopefully struck the ball across goal from an angle. Sergio Pelegrín stuck a foot out to try to block the ball, but he ended up taking the ball away from his goalkeeper and into the net. Another bit of luck allowed the winger to bag his brace. With the goalkeeper out of position to take a free-kick, the ball was mistakenly put into his path, and he doubled the lead with a strike from 30 yards, which found its way into the empty net.

The final goal of the game came through French striker Karim Benzema when he was played through on goal by Isco. He had the pace to beat the two defenders tracking him, and eventually, he got a shot away, which flew into the top corner of the net. 3-0. Attendance: 33,676. 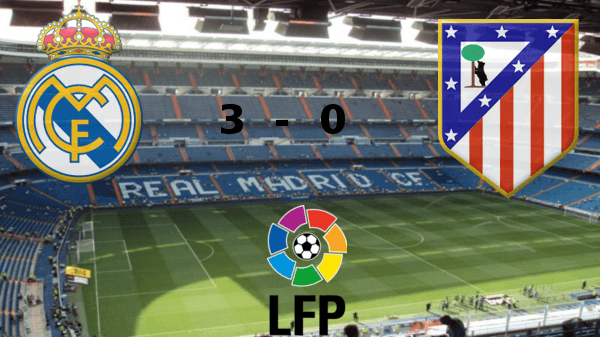 
The highly anticipated El Derbi madrileño came next for Real Madrid, as they faced their local rivals Atlético Madrid at home. The man in form, Ángel di María, netted his fifth goal of the month just two minutes in. After a pass from Isco to the Argentine, he cut inside, beating three players, before slicing it into the far post. Things looked edgy for Real Madrid up until half time. Then came the game-changing substitutions from Real Madrid manager Ruud van Nistelrooy. He brought on young winger Jesé and French striker Karim Benzema, who had a stunning impact on the derby. Jesé doubled the lead just five minutes after half time. Daniel Carvajal's cross towards Gareth Bale was headed into Jesé's path by Adrián, and the youngster headed into the net, with the goalkeeper on the ground. Early into stoppage time in the second half, Benzema became the second substitute to score. Following a through ball from Jesé, the Frenchman used his pace to burst into the box. The late lunge of Miranda was not enough to stop him from scoring, as he blasted it into the net. Attendance: 80,354. 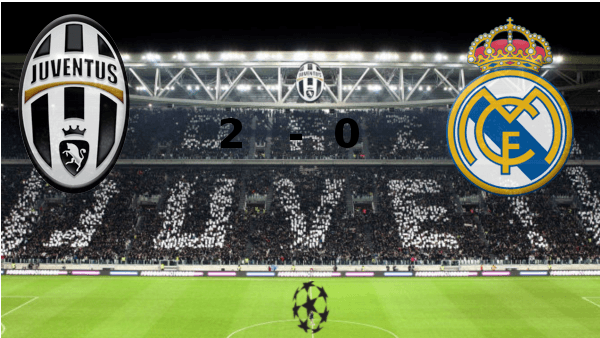 
Antonio Conte's praise of Sergio Ramos on the eve of this game was ringing loud in his mind. But ultimately, his team could not produce on the night, despite a good performance from the Spaniard. Two first half goals saw the Spanish side off, Andrea Pirlo opening the scoring with a 20 yard free-kick that drifted into the top corner. Fernando Llorente got the final goal, following a horrendous back-pass from Fábio Coentrão, which found its way into the Spaniards' path, leaving Casillas with a lot of work to do, and he couldn't beat Llorente to the ball, with the striker curling it past him. Elsewhere in the group, Dortmund came from behind to beat Anderlecht 4-2. Attendance: 41,000.
Login to Quote

bebero
8 years
Too bad the game against Juventus. I think you could get more of it.
Login to Quote

LFC
8 years
Thanks for all of the comments guys!!
Login to Quote

Nick
8 years
Some really nice results, nice graphics too. Shame about the loss to Juve

Aaron
8 years
2 points behind Barca, and a great win at Atletico! But, I must say that last result was poor 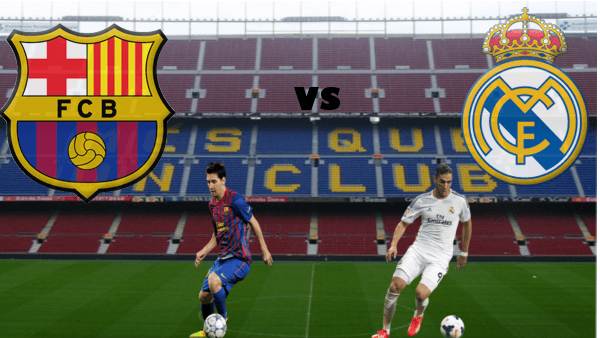 You may be curious as to why Karim Benzema features in the poster above, rather than Cristiano Ronaldo, but if you are a Los Blancos fan, you will be feeling very nervous now in the build-up to the El Clásico tomorrow night, as the Portuguese winger, currently the leagues' top scorer, will miss the highly anticipated clash due to an injury picked up in training, which will keep him out of the side for at least three more weeks, having torn a groin muscle.


Lionel Messi and his Barcelona side will look to extend their 100% record tomorrow evening, as they host their title rivals at Camp Nou. The Argentine superstar hasn't been in spectacular form so far this season by his standards, but his form has still been enough to put his side top of the league at this early stage.


This will be the first big test for new managers Ruud van Nistelrooy and Gerardo Martino, as well as new players, Lars Bender for Real Madrid and Carlos Vela for Barcelona, both of whom joined in the Summer, with Vela, however, having more experience in Liga BBVA, having signed from fellow league side Real Sociedad. 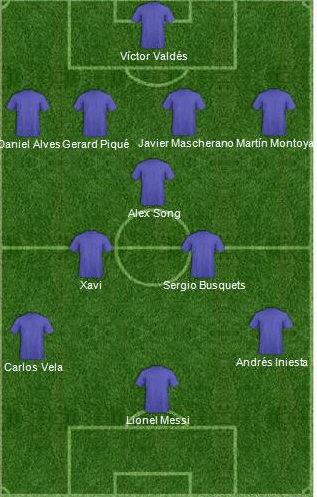 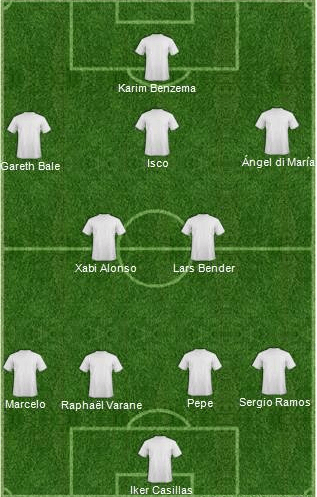 Nick
8 years
That sucks about Ronaldo, but hopefully you can still get a good result against Barca!
Login to Quote

pompeyblue
8 years
Great updates mate and a great win against Atletico!
Unlucky about the Juve loss but good luck against Barca