One of the competitions worst defensesso far this season continued to struggle as US Colomiers lost to Paris FC.

Striker Patrick Etshimi gave PFC the lead with a close range effort in the 26th minute. Colomiers captain Aurelien Mazel would answer back and tie the match up. Nobody would score until the 70th minute when Paris' Djamel Ibouzidene gave Le PFC the lead. Later on they would increase the score by three points thanks to two goals by Antonie N'Gossan (74,90). Brahim Merad would score the final goal of the match, but it was too late for the visitors.

With that Paris FC are now tied for second with 32 points and Colomiers are still in the relegation zone with a total of 13 points. Next up for Paris is city rival Red Star. Colomiers will face Vendée Luçon Football. Jack
7 years
good win there, just need to keep it up all the way until the end and you might be champions!
Login to Quote

Josh_MU
7 years
Solid win! Hopefully you can make that big push and possibly win the league!
Login to Quote 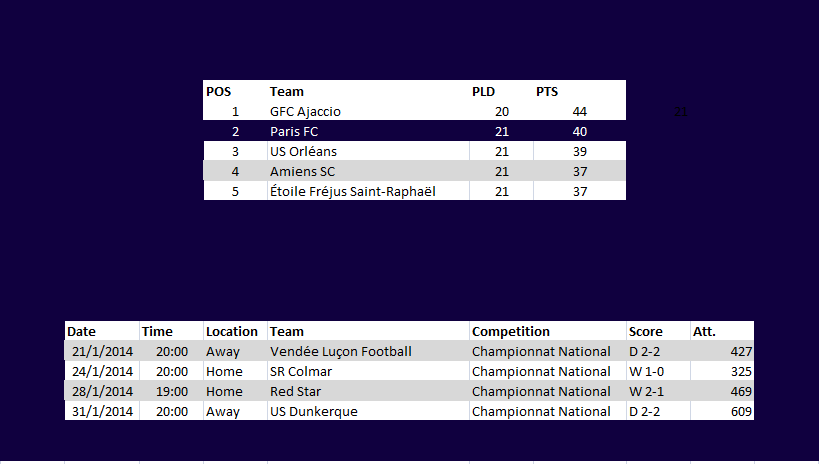 After a good winter break the boys of Paris FC were ready to get 2014 underway wile hoping for a successful second half of the season. Like every month there were four matches, but unlike other months they were all played around the last week of January. Thanks in part to Red Star.

The match against rival Red Star was widely anticipated since our 3-0 defeat back in the beginning of the season. Well the fans and players were looking forward to the match. Well after it was delayed three times to bad field conditions. Well on the 28th the two teams finally got a chance to play. We would win 2-1. It was all possible thanks to 18 year old Moussa Keita and his two goals.

PFC are now in second place and four points away from GFC Ajaccio. Next month will feature clubs such as Luzenac and Amiens. "We are looking to make February a perfect month and have only victories, It will be hard but I think we can do it."- Laurent Bonaparte.

Paris Football Club, who is this team? You might be thinking this club is some joke or a break off club after the PSG purchase by the Qatari Investment Group. Well no they are a club that created Paris Saint-Germain and then broke off of them. It is pretty complicated so here is more information. Currently second in the Championnat National (French 3rd division) they are looking to join Ligue 2 for the first time in history.

Their manager Laurent Bonaparte is in his first year and has done better than the previous managers. At one point last year the club had three managers in a year. Well Bonaparte is an ex PSG player. He was with the team from youth until the QIG bought the club in 2011. After that he left for SM Caen where he finished his career.

Now why am I telling you this fluff? Bonaparte was one of the most outspoken PSG players about the takeover. Back in 2012 he was quoted in saying, "I am ashamed that this club is losing its identity everyday thanks to some billionaire and his latest toy." He went on saying, "I am glad the team is better but it's just the idea of buying trophies that I hate."

When he took over Paris FC earlier this season his goal was to get this club to Ligue 1 and keep a true identity of France and Parisian football. His goal is to make a squad based off of hard work, great scouting and opportunity not just splashing cash every few seconds.
About a month ago he posted this message in social media and it went all over the city and country. Many have criticized and applauded him. This is what it said.

Dear people of Paris,
My name is Laurent Bonaparte and I am the manager of Paris FC. We are a club in the third division aiming to get promoted to Ligue 2 soon. As you all know I was a player at PSG for a long time and have a grudge against the club for selling out. Many reading this will be like shut up but please listen. The Qatari Investment Group have destroyed a club that was very unique to this city and country. They are trying to globalize the club. Well that is not bad but their approach is just wrong. First bringing all these foreign players like Ibra and others. It is crazy how many less French there are on the team. The other thing is prices have gone way up. How can the common man get a chance to go to matches? Finally they destroyed a perfect and classy badge. How the hell do you get rid of the 1970, make the name Paris better and take away the Louis XVI crib?? There is more but I won't waste your time. So please give Paris FC a shot and come to our matches. They are fun, inexpensive and we are creating history. Do you want to be a part of history then come see us play?

That was his letter. The response of it has been massive many positive and a few negative responses. PSG president Nasser Al-Khelaifi responded in saying. "Oh come on please these guys are nothing. We will destroy them and they will bow down to us, there is only room for one club in Paris." There was no response from Paris FC or Bonaparte.

With all of that what do you all think about the letter and do you agree with his statements? Also would you like to see Paris FC in Ligue 1 and have a derby with PSG? Comment below.
Login to Quote 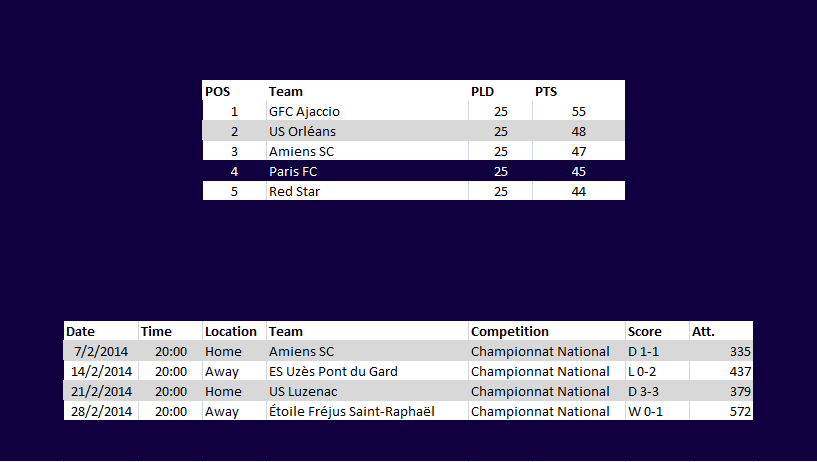 The month of February was a month of disappointment for a club who have such high hopes of promotion. During the recent four games they went on a 1-2-1 record. Previously they were in second place four points away from first place GFC Ajaccio. Now PFC are in fourth place trailing GFC by 10 points.

"It was not a good month at all. If we do get promoted to Ligue 2 these draws will kill us so we need to fix that trend now."- Bonaparte

Out of all the matches in February the one we will focus on this month was against ES Uzès Pont du Gard. In this match PFC lost their first league match since the start of the season by a score of 2-0.

Despite having the better of the match at Stade Louis Pautex, Paris FC were unable to profit as they went down to ES Uzès Pont du Gard. The greater incisiveness of the victors resulted in a 2-0 scoreline against the visitors, who failed to turn their superior possession into goals. Paris FC will be needing to work on a few things if they want to win promotion to Ligue 2.

Jack
7 years
Not a great month and the league standing has definitely shown that, hopefully you can regain good form next month!
Login to Quote

Championnat National side Paris FC has announced a new shirt sponsorship deal with global airline Air France. They will sponsor Paris FC until the end of the 2019/20 season with a two year extension option at the end of the final season.

The partnership between both groups will provide the club a strategic platform to increase the clubs brand internationally as well as in the country. Air France will also become the clubs official airline during the run of the contract.

“We look forward to working closely with Air France over the next three seasons in a partnership that we believe will be hugely beneficial to both parties. With the goal of promotion and much more the sky is the limit with Air France."- Pierre Ferracci, President of Paris FC

Frédéric Gagey chairman and CEO of Air France commented:"We are delighted to be partnered with an up-and-coming club. Both organizations represent the country well and look to capitalize on that.

In other news Paris FC have extended their Nike kit deal until the end of the 2015/16 season. The original deal was to run out at the end of this season but the two parties decided on a two season extension.
Login to Quote 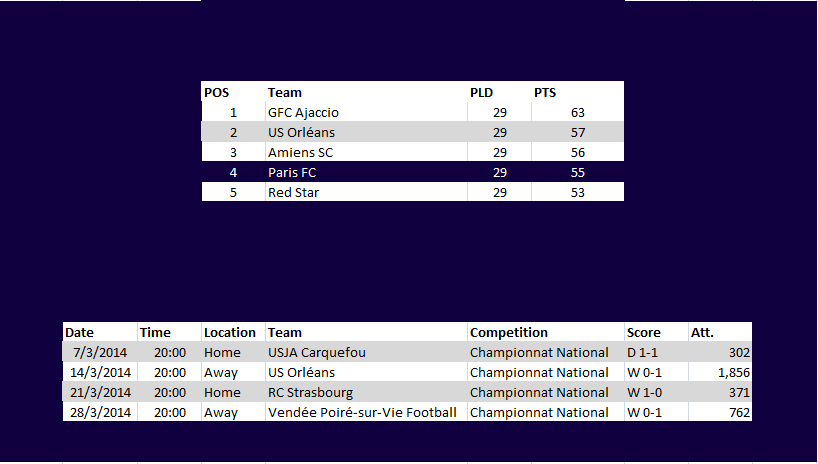 March was a major improvement for the club as they won three straight matches while drawing in only one. In the final three matches of the month the club scored a total of three goals while keeping a shutout going. Despite the three game winning streak the club is till in fourth place. Two points separate the club from second.

March was also the month where new youth would come in to tryout for the club. The good news is that everyone who was invited were offered contracts.Each player were given youth contracts that will last until the end of the 2015/16 season. There are two players who have the most potential and impressed the first team coaching staff. Goalkeeper Marino Gouffran and attacking midfielder Nicolas Roux have been chosen as the best players during the trial day. 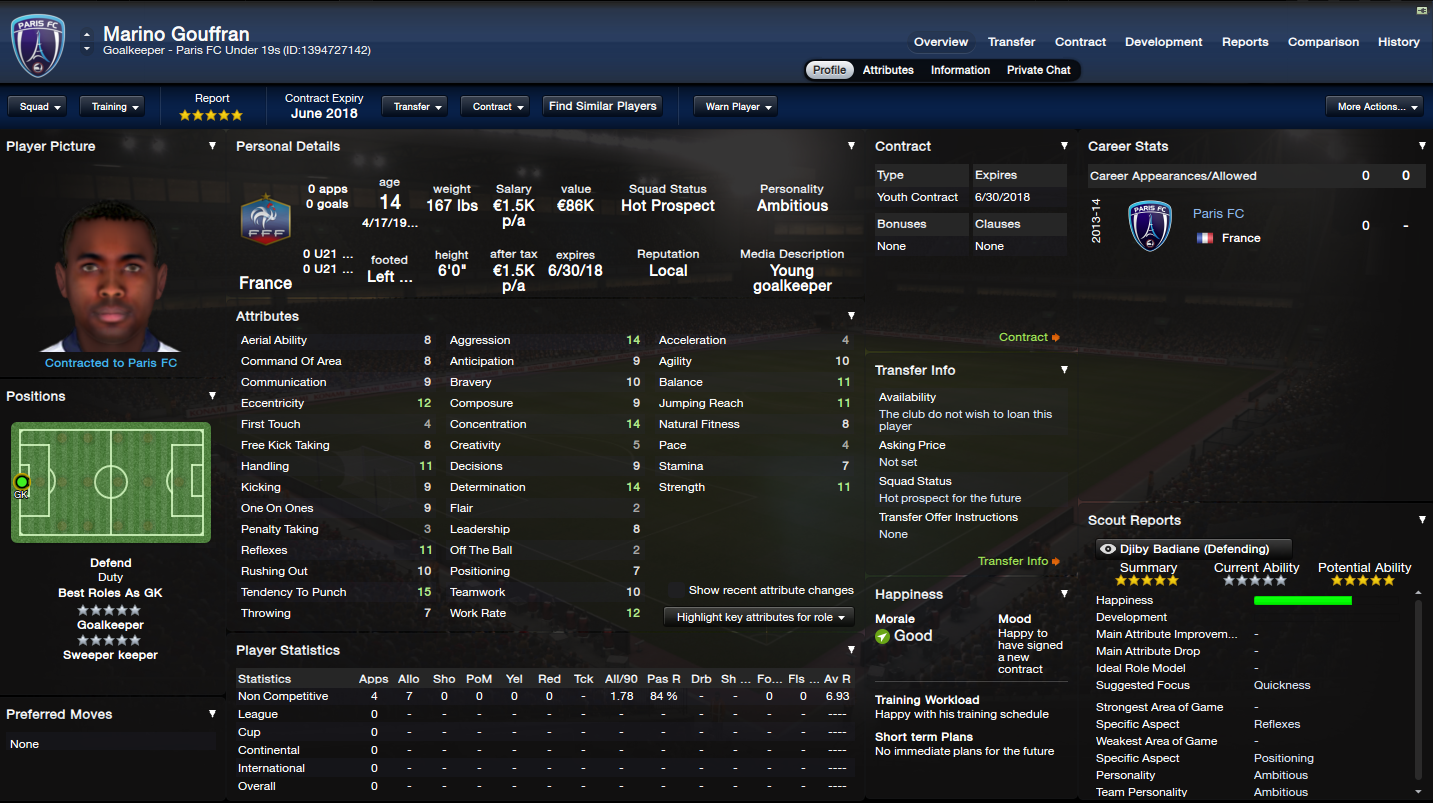 The next two months will be very important for the club. With five matches remaining Bonaparte is looking for that edge to get promoted. He said,"That streak at the end of the month really helps out, I hope we can continue in the last few matches." THe final home match is set for a 8 pm kickoff on the second of May against FC Bourg-Péronnas.

bebero
7 years
You have a pretty good, and of first-class match even if you have a fight chance to get to No. 1. Good luck man !

They did it!! Paris FC have survived on the last day of the Championnat National season. Despite a 5-1 loss to league champions GFC Ajaccio the team is very happy to edge out Orleans and Red Star just by one point.

"I can't believe we were able to get promoted. These last three matches have been disappointing and almost caused us to not get promoted. Now it is time to reevaluate the squad and get ready for Ligue 2."- Laurent Bonaparte

The fans on there other hand were overjoyed and are excited. Earlier this year Bonaparte tried to get more fans and it did not work. Now with promotion more people are starting to recognize the clubs presence in France.

With that Paris FC now join GFC Ajaccio and Amiens into next seasons Ligue 2. Metz, Creteil and CA Bastia have all been relegated. The promotion also means the clubs will now become professional and this will help with funding. Will Paris FC survive Ligue 2 next year? pompeyblue
7 years
Nice updates mate!
Unlucky about the 5-1 loss but congrats on getting promotion


With the season now over I now have a few meetings to attend to. First is the one with Pierre Ferracci and then later I have the final team meeting.

Later on I meet with the players.

"Congrats on a good year it has been hard but we prevailed. For all leaving thank you and good luck on whatever you are going to do."
"Thanks boss, it has been fun!!"
"How do you think we will fare in Ligue 2?"
"Honestly we need to fight off relegation,I honestly don't think a top 5 ending will happen."
"Good your goals seem realistic"
"Well that is all, have a great vacation and see you soon."