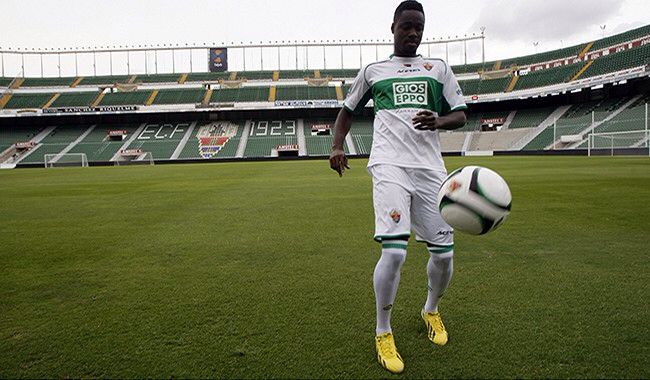 Italian side Genoa have sold Ghanaian striker Richmond Boakye to Spanish side Sevilla - just weeks after the end of their co-ownership agreement with Serie A Champions Juventus came to an end.

The Ghana international impressed on a global scale while on loan in La Liga last season, playing for relegation tipped Elche. With Boakye up front, the team comfortably avoided relegation, and the 21-year-old scored 21 goals in 38 league appearances for the side - finishing only behind David Villa, Cristiano Ronaldo and Lionel Messi in the goalscoring charts.

Genoa purchased full ownership rights for the striker, who began his professional career with the team, for a fee of £2 million, and were happy to sell him on for a big fee of £10.5 million - the fee could rise depending on whether certain clauses are met.

The signing of Boakye adds to the signing of Thomas Ince, who joined Sevilla last week. It is understood that Los Rojiblancos are hoping to do one better than their previous campaign, and go on to qualify for the UEFA Champions League - for the first time since 2010.
Login to Quote 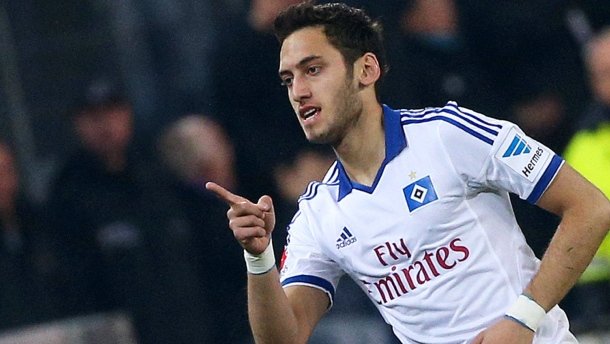 Çalhanoğlu scored three goals in the Bundesliga last season, but his side were relegated; Çalhanoğlu's ambition meant he had to leave

Sevilla have already made two signings ahead of the 2014-2015 season, bringing Blackpool's Thomas Ince and Genoa's Richmond Boakye into the club earlier this month. Now the Liga BBVA side have cted once again, picking up Hamburg SV's Turkish midfielder Hakan Çalhanoğlu, for a fee believed to be around £6.5 million.

The 21-year-old was a key player for HSV, but it was the first time that he had played in a top division, and he often looked out of place. However, there were several moments over the course of the season where he showed his quality, and the player earned two Man of the Match awards in 23 appearances, scoring three goals and laying two on for his team-mates. The season before, he impressed out on loan with the team where he made his name, Karlsruhe. HSV manager Mirko Sloma was spotted at the ground in more than half of the games that Karlsruhe played, and clearly thought that the Turkish player was ready to make the step up.

In some ways he was right, but he needs to mature more as a player if he is to be a success at Sevilla. He is highly rated by many pundits in the game, and has been labelled as the next Vedat Okyar, a Beşiktaş legend who sadly passed away in 2009.
Login to Quote

Zed
6 years
Nice signing there, with Calhanoglu. He'll probably become one of your best players!
Login to Quote

Jer
6 years
Some nice signings, with Calhanoglu getting himself a goal in his first appearance (non-official, ofc)
Login to Quote

Neal
6 years
I really like those signings. I don't know much about Calhanoglu but I think Ince and Boakye will be very good for you. Will Boakye be third string behind Gameiro and Bacca, then?
Login to Quote

Zed
6 years
Which Dinamo are you facing? Dinamo Zagreb I suppose. But you'll probably finish 1st or 2nd in that group, good luck!
Login to Quote 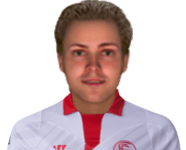 Welcome to a new annual feature of the Sevilla F.C. Official Website, called "Meet The Future". Each season, we will meet with one of the most promising players from the Sevilla academy for an interview so that the fans can get to know some of the lesser known players from the squad.

This season, we have arranged an interview with 16-year-old Albi Barba.

Q. Albi, thanks for coming along today. Who did you support when you were growing up?

A. Well, I've lived just around the corner from the training ground since I was born, so of course I have to say Sevilla. I've been to so many games with my father, Juan, who, along with my junior team coach, have been my footballing mentors since I began playing, aged six.

Q. What gave you the courage to try out for Sevilla?

A. A lot of players in my junior team had told me that Sevilla scouts were coming down to watch a couple of our games, and that they thought I would impress them. Pablo Blanco, the Head of Youth Development at Sevilla came down one game and all I could see out of the corner of my eye was a man scribbling away in his notepad. I was determined to impress him.

Q. So how did the trial actually go?

A. We drew the game 1-1, and personally, I do not think I played as well as I could have. I was named Man of the Match, and Pablo told me after the game, 'We'd be happy to offer you a contract if you want it." And I wanted it. I met with Luis Fabiano, who was one of my idols growing up, having watched him play for Sevilla, and the contract was signed. My father, who was with me, won't mind me telling you that he shed a couple of tears.

Q. Have you developed any friendships with some of the other youngsters at the club?

A. I've been with some of the other players a few times, but the one player that I am really close to is Luis Alfonso Ruiz, who played on the same team as me in the trial match, and is the same age as me. We've had a few altercations in training, and he is actually the reason that I'm unable to play at the moment, but he is a good guy, and all of the stuff that happens on the pitch is left there.

Thank you to Albi Barba for his cooperation, and we wish him a speedy recovery. Luis Alfonso Ruiz is currently on loan at Segunda B4 club, San Fernando C.D.. 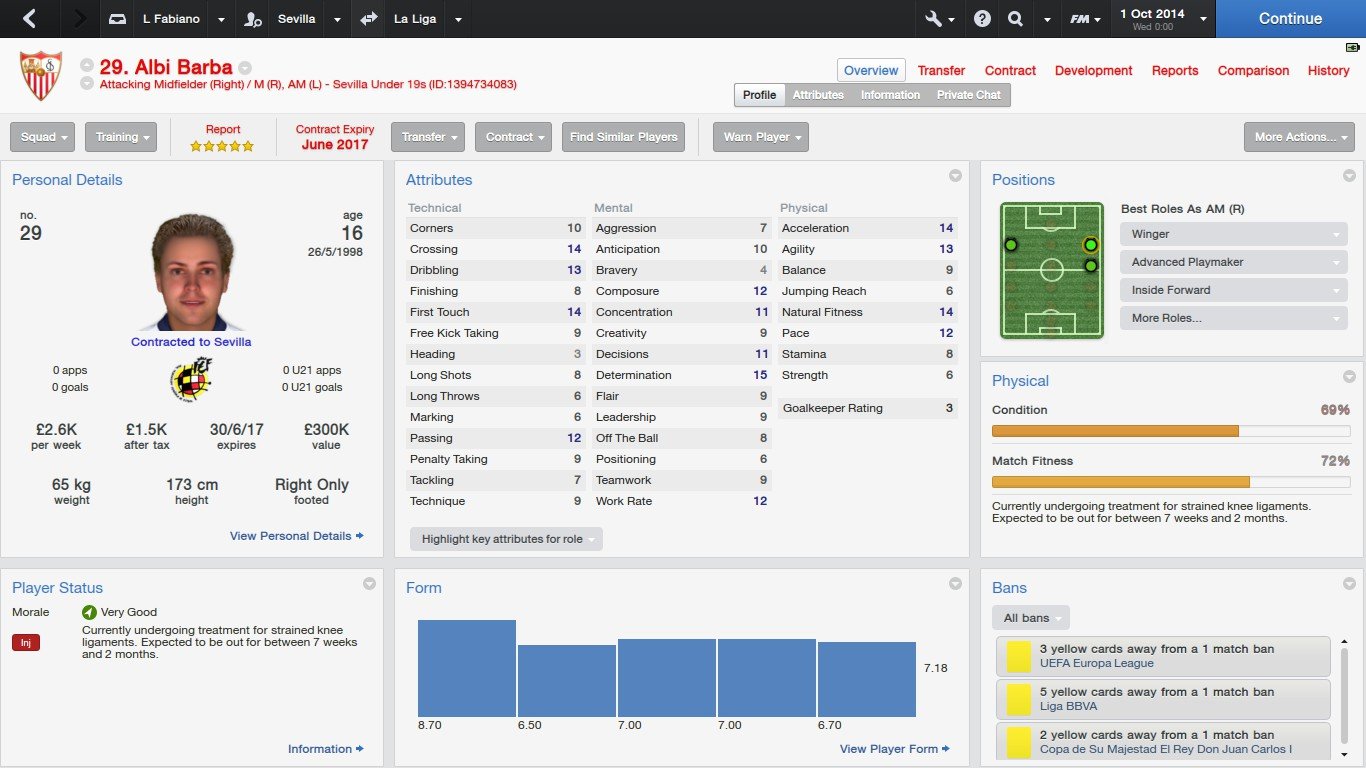 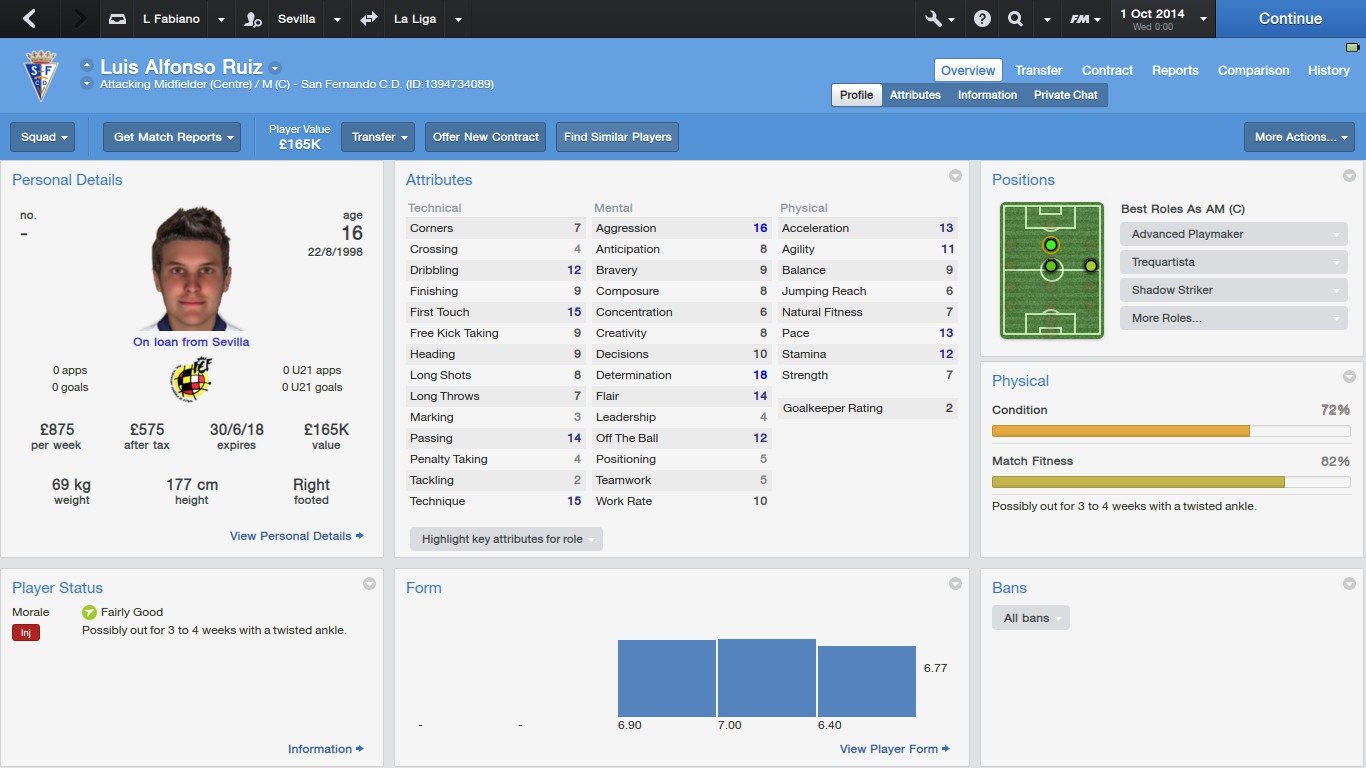 Jack
6 years
Great update, LFC. A great interview and I can't wait for him to mature as a player! Looks great!
Login to Quote

Jer
6 years
With that crossing, we could be seeing another Jesus Navas to a future Alvaro Negredo, if you get a decent TM.
Login to Quote Jer
6 years
3 pts away from top! You can do it!
Login to Quote