ollyewest
7 years
great work mate. how do you get the updated database with the 2014/15 trasfers on them? i'm new to this

Thanks for the comment, I use this one: http://www.fmscout.com/a-fm14-transfer-data-update-packs-by-pr0.html
It gets updated every few days/weeks
Login to Quote

Review:
February was arguably the hardest month for Cañizares since he took over from Pizzi: the team played two matches against Real Madrid for a place in the Copa del Rey final, they played two matched in La Liga, one of which being at Camp Nou, and they played a home match against English champions Manchester City in the Champions League, in the 1st knockout round.

The first match was at home against Real Madrid in the Copa, a winnable match, considering they had just beaten Los Galacticos with great dominance. But at half-time, Valencia were down 1-0, after Umtiti scored a goal in the 30th minute. Ronaldo made Valencia’s dreams of a Copa final very distant, as he scored 2 goals in the second half, making the final score 3-0: a humiliating loss for Cañizares’ team, especially after they won 2-1 in La Liga against the same team.

In between the Real Madrid matches, Valencia played another giant: Barcelona, at Camp Nou. If they lost, the gap between Cañizares’ team and Barcelona would be 6 points. Valencia played like a team full of passion, and they also took the lead through a Guardado volley in the 19th minute. But just before half-time, Messi equalised with what could prove to be a really important goal at the end of the season. After 48 minutes, there was another twist in the tale, as Marc-André Ter Stegen scored an own goal to give Valencia the lead again. 2-1 was the final score, and Valencia are top of the table again, on goal difference.

Next was the second leg of the Copa del Rey semi-finals against Real Madrid. Valencia had lost 3-0 at home, so nobody gave them a real chance to progress. Valencia didn’t play like they wanted to win, and eventually they lost 2-0, meaning they were out of the Copa in the semi-finals for the second time in two seasons.

Next up was a match against Sevilla, at the Mestalla. Sevilla were 17th at that moment, so the fans felt it was a winnable game. Sevilla were took the lead after 14 minutes, but Valencia dominated the match and equalised before half-time. Just after half-time, Muñoz picked up his second yellow card, and that meant Valencia had their work cut out. In the 60th minute, Gameiro put Sevilla in front again, and Valencia never looked like scoring after that. When Gameiro scored the 3-1 in the 78th minute, after a huge mistake from Mallo, people walked out of the stadium. At the post-match press conference, Cañizares bashed his team: “It seems like everytime we are in first, we can’t handle the pressure. The players should grow up, and manage to deal with this, or else I will have to take action.”

Valencia had to get focused really quickly, as they faced Manchester City in the Champions League, at the Mestalla. But they were all but focused, as every pass wasn’t quite sharp enough. After 9 minutes, Mathieu wasn’t focused either, as he made a dumb foul in the box, meaning Alaba had the chance to put Villas-Boas’s team in front. And he did. Not much later, Brahimi equalised, this goal gave the fans some hope. What gave the fans even more hope, was a header by Jonas in the 85th minute: 2-1 to Valencia, and the crowd at Mestalla went crazy. Although Valencia have won, they aren’t in a great position for the return, as Manchester City have an away goal.

The last match in the hectic month of February was a match against Athletic, at Nuevo San Mámes. Valencia won easily: 3-1.

Player of the Month(s):
Andrés Guardado has been back in form this month, grabbing himself 3 goals and 1 assist.

I don't really know what went wrong there lol

Still, you shouldn't have lost

Slid3Tackle
7 years
Don't listen to them mate, you're doing very well! The second place it's great for Valencia!
Login to Quote

Review:
Another hard month, as Valencia had to catch up with Barça, but also had the chance to go through to the quarter-finals of the Champions League. Valencia started in La Liga with a hard away match against 5th placed Real Sociedad, but Valencia kept their nerve and won 1-0. The last match before the crucial meeting against Manchester City, was a home match against Osasuna. Valencia had no problems with the team of Polish coach Jan Urban, and they won 4-2.

The crucial match: away against Manchester City. Valencia had to be really focused to not go down against the great team of André Villas-Boas. Cañizares’ team didn’t start off too well, and at half-time they were 1-0 behind, meaning that if the score stayed the same, City would progress. After 83 minutes, Griezmann scored the 2-0, meaning Valencia’s Champions League adventure was over.

After this match, Cañizares has accepted an offer from a yet to be announced club – more news later. This means Cañizares’ successful period at Valencia has come to a close, and the club will have to search for a worthy replacement.

Player of the Month(s):
Andrea Consigli, Valencia’s Italian goalie, has been a rock in goal these past few matches.

Neal
7 years
Only 3 pts back, not a bad spot to leave the team in...wonder where you're headed

Thanks for the comment man, I fully agree with you!
Login to Quote

Erm, I can't read, but thanks anyway, I guess xD

What a way to mark 100 replies

Cañizares signs contract at AS Roma 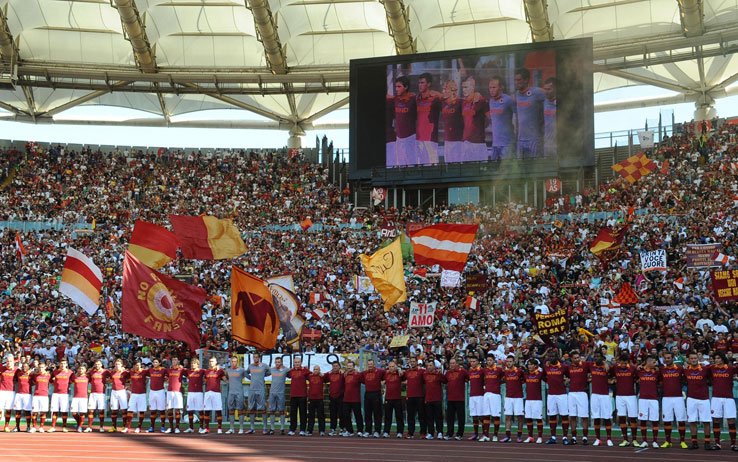 Valencia’s success manager of the past two seasons has signed a five-year deal at AS Roma. Roma recently fired the very unsuccessful and unpopular former Lazio manager Vladimir Petkovic, who only picked up 36 points from 29 games, meaning Roma are 13th at the moment.

Cañizares has left a great impression in La Liga, and it’s a surprise he has chosen for AS Roma as his next step, who are currently far from 2nd in Serie A. Roma have not set the bar too high for their new manager, as there are not a lot of matches left for him to climb the table. This is the current standing in the Serie A:

AS Roma are currently on a streak of 8 matches without a win, one of the reasons Petkovic has been fired. The other reasons were announced by chairman James Pallotta: “We weren’t pleased with Petkovic’s work – he hasn’t made this club a better club at all, he’s actually made it worse! We hope that Cañizares can show that he’s a great manager in Italy as well, and everybody at the club wishes him the best of luck.”

The American owners of Roma have indicated that Cañizares will have “a good budget” to strengthen the squad in all the necessary areas. So we can expect big transfers from the capital club in the summer. It is widely expected the Olimpico outfit will try to get a new keeper and a new left-back.

The new manager has also attended a long interview with us after his presentation.

“Hello Santiago, I’d like to welcome you to Rome!”

“Thank you very much, I hope I can stay here long.”

“What do you make of your squad at the moment?”

“I think that we’ve actually got a really good squad, but under the previous managers, it just hasn’t come out. I hope I can motivate the squad better, and get everything out of the players.”

“What do you expect of this season”

“Not a lot actually”, he smiled, “We’re 13th at the moment, and there’s not a big chance we’ll qualify for the Europa League. We’ll need to focus on next season, while also trying to improve the results in the league.”

“Have you already got plans for next season?”

“Yes, actually, I’m planning on getting rid of several players who have got high wages, but don’t play in the first team. I’ll also try to freshen up the squad with younger players, as I feel we’ve got a pretty old squad at the moment.”

“How is the atmosphere in the dressing room at the moment?”

“Not amazing at the moment, due to us being in poor form, but I reckon when we start picking up some wins, the atmosphere will improve drastically.”

“How are you planning to play in your first match?”

“Thank you for answering these questions, we wish you the best of luck in Italy!”

“I’ll do my very best to make Roma a great team again, and I hope to have many great years here. Thanks for the kind words.”
Login to Quote

Neal
7 years
I like that starting XI, hopefully they can do well for you

Griffo
7 years
I'm interested to see who you bring to Roma from your former club.
Login to Quote