dialsquare
6 years
Neal: I felt really lucky with that deal, yes. Quite a bargain.

ATLÉTICO ANNOUNCES KITS FOR THE NEXT SEASON 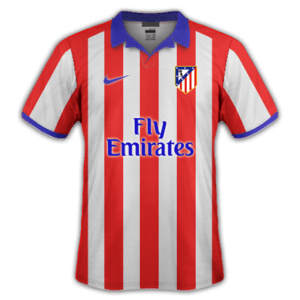 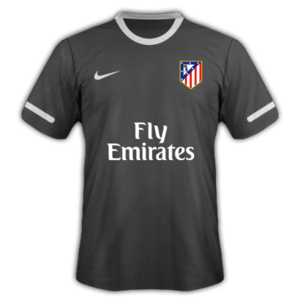 Atlético could last night proudly showcase their new home and away kit for the forthcoming season. The club has decided to stay with the usual style of red and white stripes with hints of blue. Even without the logo one could quickly guess that the home kit is Atlético's. The away kits are slightly different from last seasons yellow and blue kit, going with a plain and clean dark grey shirt. One can also notice a change in sponsor. The club got many complaints last season due to the "Azerbaijan, Land of Fire" sponsor which took too much attention. A new deal has been signed with sponsor giants Fly Emirates whom happily agreed to have their name in blue and white.

The designer of these two beautifully looking kits is tom2398. He perfectly stood up to the task, and I'm sure he would happily help some more guys out. Thanks again, Tom.

The pre-season games has been announced. The team will first travel to Germany to face Freiburg and Frankfurt. A week later the team will leave for England where they will play a strong Liverpool side. The last game of the pre-season will be in Italy to fight Hellas Verona, a game the team will be expected to win. Although building fitness and team cohesion comes first in these games, Conte will also be expecting the team to grab some results in order to keep heads held high before the real deal starts. It is also decided that Atlético will face Real Madrid in the two-game Super Cup final.

Although Atlético and Conte has had a busy, but great start to the transfer window, they are rumored to still be in the market for new players. Not only is it looking like a busy transfer window for arrivals, but also for departures. Arda Turan was recently rumored to be a Spurs target, but Atlético doesn’t seem to be willing to sell. Marca says the London club is going to have to bid over £20 million in order to land the Turkish playmaker. Atlético seems unwilling to sell, but if the right price shows up the deal might take place.


http://www.readfootball.com/sites/default/files/resize/images/users/u950/111_129-580x322.jpg
Spurs is interested, but will have to splash the cash for Arda Turan

Atlético does certainly not look done with getting new faces in at the Vicente Calderón, and the team is reportedly looking at getting a new winger in despite the arrival of Álvaro Vadillo. There has been no strong rumors of any specific players, but the team looks to be lacking in the winger department. The club is also going to have to look for another attacking playmaker if Arda Turan is to sign for Spurs.

tom2398
6 years
Great update and thanks for the mention ;). I would personally keep Turan as he is natural on both wings and the centre but if you get an offer of £20m+ it would be hard to turn down...
Login to Quote

dialsquare
6 years
Thanks for the feedback! I can confirm that I got a bid for Arda Turan over £20 million. You'll hear more soon

dialsquare
6 years
tallery1164: Me too. Thanks, mate!
Login to Quote Antonio Conte's first games as Atléti manager has been mainly positive. Despite conceding seven goals in only four games, the team has managed to score impressive 12 goals. Now, they say winning teams are built from behind, but maybe we can show otherwise? Anyways, we will have to work harder on our defending. Even though we scored a lot of goals, we can't afford to concede as much as we have when the real games starts. This has certainly not been a bad start though. Our play has been promising, and our team looks strong. Very happy with the 3-0 win away against Liverpool. This is just practice though, so hopefully the team can perform even better on the big stage.

As I said earlier, the team looks strong from every angle, but were still looking to bring a new face in. The team has dept in almost every position except for on the wings and maybe center attacking mid. I have faith in our current squad though, and I'm sure we will be able to compete against Real Madrid and Barcelona. Hopefully that's the worst teams we'll face in the league this season.

PLAYER OF THE PRE-SEASON

http://images.planetf1.com/14/06/496x259/Mario-Mandzukic-Croatia-training_3159715.jpg
Mandzukic and Atlético Madrid has so far proven to be a good match

Pre-season might not be that important, but Mario Mandzukic's performances so far has been beyond expectations. He's had an average rating of 8.30, scored two goals and provided 4 assists. Playing him as a deep-lying striker has transformed him into an assister as much as a goal scorer. Despite only having 12 in finishing, his enormous physicality and tactical awareness has helped both him and his teammates scoring 12 goals in only four games. Hopefully he can keep this great form running.

Atlético Madrid and Antonio Conte are proud to unveil their new signing. Nicusor Stanciu has signed for the capital club for a sum of £6.5 million, and he has signed a contract linking him to the club for five years. Despite only being 20 years of age, the Romanian playmaker managed to develop into a starting player for his former club Steaua Bucharest. This looks like the signing that will sort out the dept problems for Atléti on the wings and in the centre attacking midfield position.

Last week there were numerous rumors on Arda Turan joining Spurs, but he has reportedly turned down the club. The London club bid £26.5 million for the playmaker, a bid that was accepted by the Rojiblancos, but Arda Turan was unwilling to leave, a decision many Atlético fans will be happy with.

More transfer gossip to come as the season starts next week. To be continued.
Login to Quote

ARSENAL_ruleZ
6 years
Loving this Story and what a crazy match against Freiburg.
Login to Quote

Neal
6 years
Nice signing in Stanciu, and a really good preseason as well...nice update style, by the way, wonder how you thought it up?
Login to Quote

Neal: Yeah, I'll admit I borrowed some from you. I have to ask though cause I'm kind of new at this forum, does update styles pass on and on, or do you kind of have to create your own? Cause I can do that, just really liked the way you set the games up and all that.
Login to Quote

http://vntimes.com.vn/upload/thang-5-2014/ngay-3/Levante-vs-Atletico.jpg
Los Rojiblancos kept it late, but impressed in their first comptetitive game

Saturday August 18th, 18:00. Antonio Conte arrives at Vicente Calderón for his first league game as Atléti coach. After a shock exit from Diego Simeone the Italian mastermind has prepared his team for the forthcoming season, impressing in pre-season games as well as improving their squad in the transfer market.

Although it took 66 minutes for the ball to pass the goal-line, Atlético Madrid managed to end the game in a confident manner, winning 3-1 to Levante. The first half started with a bang as Mandzukic hit the post twice after only playing 12 minutes. It cooled down a little after this, but the Rojiblancos kept on pressing the underdog. It didn’t look like it would happen though as Levante defended well and was kept in the game by a strong performance from their goalie, Leandro.

Just like the first half of the game, the players looked very keen on getting an early lead as Vadillo hit the bar five minutes after the break. It did however look like something wasn’t shining in Atléti’s attack. Due to international friendlies just three days earlier, Léo had to play centre attacking mid instead of Arda Turan, and the Brazilian youngster struggled. He was then subbed off for the new signing who just got his first goal for Romania, Nicusor Stanciu, who proved to be the difference Atlético needed.

Just four minutes after being subbed on the wonderkid provided another wonderkid, Álvaro Vadillo, with a stunning through-ball. Vadillo sayd thank you and finished the attack with a great finish. 1-0 to the Rojiblancos. But Atlético and Stanciu didn’t stop there. Just four minutes later he was on it again scoring the second goal with a placed shit from just outside the penalty box. But yet again, the Romanian international wanted more, and in the 82nd minute he scored another, earning him a man of the match award. Levante got a late consolation in the 86th minute when Jordi Xumetra scored with a header on a corner.

Next, Atlético will face their rivals Real Madrid in the Super Cup final.
Login to Quote

Neal
6 years
Awesome to see your signings providing the goals, definitely good buys! Must have been tough seeing Mandzukic hit the post a lot in the beginning, but you pulled through for a nice first three points

dialsquare
6 years
Neal: Yeah, it didn't look good, but lucky for me the signings showed up when I needed them most. Gave me more than I could expect