After a hectic summer, Conte looks to finally have settled properly in his new club, Atlético. He has already experienced ups and downs with the team, and they can go anywhere from now. Although everyone know Real Madrid and Barcelona are still the top, top clubs in Spain, the board and the fans will obviously have some expectations from the team. They won the league and made the Champions League final last year, so Conte will have a hard time making them entirely pleased.

Here are this month’s competitive games:

As you can see, a month of both ups and downs. We won two important league games against teams you could expect us to win against, but it feels good anyways to have those three-pointers in the pocket. And then the Super Cup final loss which doesn’t mean too much. Actually it has shown that Real Madrid isn’t all that cause I could’ve beaten them, just messed up my team talk. The Barcelona humiliation was unavoidable, just wasn’t good enough. Tired players against Barcelona without a completely done match plan is never going to work…

Here is the table in Liga BBVA after three games: 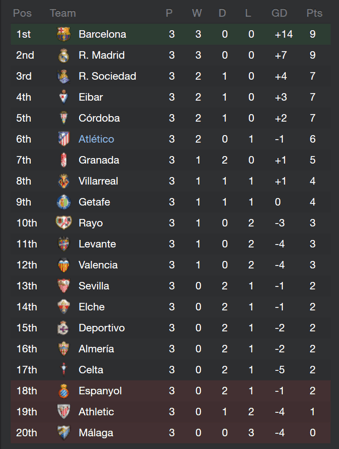 Six points after three games isn’t too shabby considering you’ve probably already met the best team in the league. Only worry is our goal difference on -1, who knows how important that can be. We’re already 15 goals behind Barcelona, and 8 behind Real Madrid. Anyways, it’s only just started; we’ll manage to get up there. At the end of the day, it’s all about the points, not the goal difference.

Here are some player stats from the league:

Although there has been a lot of transfer activity with Conte in the manager seat, the Rojiblancos also did some business before that. As they have done many summers now, they yet again lost two key players as Diego Costa and Filipe Luis wanted their Chelsea move. You know what they say; if you can’t beat ‘em, buy ‘em.

Here’s the transfer activity done by Conte after Simeone’s resignation:

With the addition of £38 million for Diego Costa and £22 million for Filipe Luis, the club has made a healthy profit this summer even though they spent about £20 million for new striker, Mario Mandzukic. The club has a huge dept to pay still and the club’s financial situation isn’t at it’s best. The team may be lacking something from last season, but I don’t think it’s a lot weaker. If the new signings play as expected we could have an excellent season.
Login to Quote

bebero
6 years
A month is not very good, because you lose a trophy, and a defeat too big! Good luck in the future!
Login to Quote

dialsquare
6 years
bebero: I don't view it that pessimistically, but you can certainly argue it. I expect to see a better September though!
Login to Quote

Neal
6 years
The month was fine other than the 6-1, which must've been real tough to watch! Don't worry, though, I'm sure you'll bounce back!!

ATLÉTICO BOUNCE BACK WITH LATE GOALS 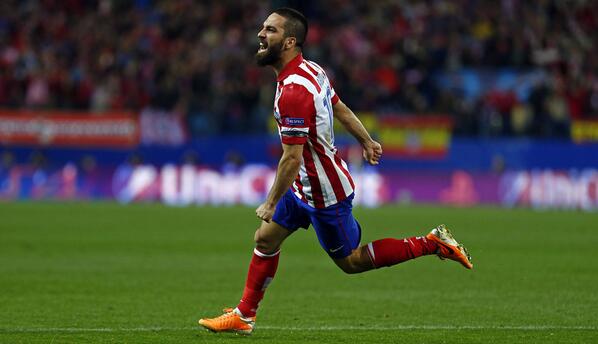 After two straight defeats in a row, Atléti's morale was on a record low, and only a victory against Granada could help the team get back up on their feet again. Conte has had a very mixed start at his new club, and there is no lying saying he had pressure on him for his team to perform tonight. Luckily, his team won and got the three points.

It didn't look too good though. After only 17 minutes his team were behind, and had to wait until right before the break with an equalizer. This goal looked to strengthen the team even more mentally, and as Granada's Babin got his second yellow, everything seemed to go Atlético's way. What they really got from this was a surprise counter attack which El Arabi scored, getting Granada 2-1 up with only 10 men.

The difference this time came from someone who has disappointed so far this season, Arda Turan. He was taken on for Nicusor Stanciu who has an average game, and Conte had to trust the Turkish to make a difference for him. Fortunately, he did just that scoring two quick but beautiful goals putting the Rojiblancos ahead. He was also given the MOTM award after the game.

As Conte said on his press conference when he was appointed, the league is the most important competition, and 9 points out of 12 so far isn't too bad. If we can keep this form going, we'll be up there with Real Madrid and Barcelona, I'm sure of it. But if we want to do even better than that, we have to beat them.
Login to Quote

Neal
6 years
Arda Turan, what a beast!
Login to Quote

dialsquare
6 years
Neal: Yeah, I was really happy with his performance. Our morale would be gone with a defeat here. Hopefully he can continue this. Really happy I signed Stanciu too, competition is needed.
Login to Quote