: Thank you, I'm glad you think he's a good signing, you'll see how well he does for me

pompeyblue
7 years
Very good signing Alex, and in general some great updates!
Looks like you have definitely taken the FMSW feedback on board with the inclusion of some very nice graphics

bebero
7 years
Pogba and Florenzzi, you already have dementia means the two! Good luck, and I hope for them to help you!
And very beautiful presentation, you did a very nice graphics.
Login to Quote

Pompeyblue: Thank you! I did take it on board, and while I had (note: had) a working Photoshop, I thought I'd make the most of it.

Fzemdegs: Thanks, you'll see how he does!

Bebero: I didn't sign Pogba, which is why I signed Florenzi. I hope Florenzi does made a difference, glad you like the story so far, thank you!

http://fedenerazzurra.com/wp-content/uploads/2013/08/balanta.jpg
Eder Alvarez Balanta (above) is one of two defensive signings PSG have announced today, the centre back from Colombia signing from River Plate.
Paris Saint-Germain have signed two defensive players, one being Eder Alvarez Balanta from River Plate, the other being Serge Aurier from fellow French side Toulouse.

Balanta, pictured above, is a Colombian international who has made three appearances for his country at the age of 21. He has spent his senior career at just one club so far in the club he signed for PSG from, River Plate. However, as a youth player, he was found by Academica back in 2010, but released soon after and found by River Plate. This year, he was called up to the Colombian squad to go to the World Cup in Brazil, and as a whole, his side were successful, reaching the quarter finals before being knocked out in an unlucky match against the hosts.

In a senior career that has been going on since 2011, he has played 38 games for River Plate in the three years of football, scoring two goals, not a bad achievement for a young centre back. He made his senior debut against Racing Club, and scored his first senior goal in his third game of football, netting against Godoy Cruz. This was followed by a goal against Quilmes Atlético Club in the very next game, and the future looked bright for the Colombian star. However, no more goals happened to follow, yet some outstanding performances in the Colombian league impressed teams like Barcelona.

The Colombian defender has joined the club for a small fee of £7.5m, and the signing was revealed via Twitter today by the official Paris Saint-Germain page soon after an English rumour page announced that the deal was done.
Football Rumours Worldwide @FRW2k14
Paris Saint-Germain have signed Colombian defender Eder Alvarez Balanta from River Plate for £7.5m after the 21 year-old was seen training with the club this morning. #Balanta #ParisSG

Paris Saint-Germain Official @PSGOfficial
We are delighted to announce the signing of Colombian talent Eder Alvarez Balanta, who signs for £7.5m from River Plate. Unfortunately, we could not make a celebratory graphic for the deal as it was revealed before we planned. #Balanta #ParisSG
Balanta wasn't the only player to join PSG within the last few days, as highly rated Ivorian right back Serge Aurier has been revealed as a new signing for Les Rouges-et-Bleus, joining the club for a fee of £16m. However, most of this will be paid in £3m installments for the next four years, meaning there's still money left in the bank for more deals if manager Ronaldinho so wishes.

Aurier, who has spent his career at clubs like Lens and Toulouse, impressed all at the World Cup in Brazil, and has made 11 appearances for Ivory Coast, not a bad feat for a 21 year-old. In 2009, he joined the Lens senior squad and ended up making 40 appearances in three seasons, before being poached by Toulouse. For the side in purple, he scored eight goals in seventy games, and it was this that lead to Ivory Coast calling him up to the squad for Brazil in the first place.

Ronaldinho spoke about the two deals he had completed, this being the only way the Aurier deal was confirmed, saying "Balanta and Aurier are two great prospects, so to get them for £23m between them is nothing but a steal, in my opinion. They will fit right into the squad as first team or back-up players, but rest assured that both will be seeing frequent game time across the season."

Which translates to "To sign for a European giant like PSG is a great achievement, I hope to have a long career in France, especially to play with people like Ibrahimovic, Thiago Silva and David Luiz. I cannot wait for my dream to come true here at PSG."

Aurier said "It's a big move, coming to PSG, but I know that I need to keep my cool and not be put under too much pressure, I do not want to be another Fernando Torres or Andy Carroll, I want to get on with my job and do well with my career, something I know I have the ability to do.

PSG have signed defensive duo Eder Alvarez Balanta and Serge Aurier from River Plate and Toulouse for £7.5m and £16m respectively. The signing of Balanta was revealed by a rumour page before it was revealed by the club, so there were no graphics involved in the Twitter reveal, and Aurier's arrival was announced in a shock interview with Ronaldinho when just Balanta was supposed to be unveiled. Balanta was excited about his time in PSG colours, while Aurier wanted to focus and not be a big-money flop like Fernando Torres.

Slid3Tackle
7 years
two great signings mate! At least Balanta...I had him in one of my careers and he was amazing!
Login to Quote

Tallery
7 years
Two great signings, will do very well for you!
Login to Quote

pompeyblue
7 years
ofc Arran had to get the 69th reply

Great signings though Alex, no doubt they will be excellent players for some time to come, in this PSG side!
Login to Quote

Neal
7 years
Nice signings to reinforce at the back, hopefully they develop well!
Login to Quote

AlexTHFC
7 years
AAN: Thank you! I've wanted to get Balanta for any big team save, but sometimes miss out, so it's good to get him here.

Thanks, I do hope that Vietto, Aurier, Balanta and Florenzi become great PSG players

Neal: I was glad to get all four of them, hopefully they can become club legends

After a variety of young signings for us to celebrate, it was time for the pre-season to begin. It was a hectic one, with seven matches being played, and not all results were good, believe me, but I am confident that we can keep our spirits high for the new season to begin, in both league and cup.

Unfortunately, I forgot that you were only allowed a certain amount of non-EU players, and when I signed Vietto and Balanta, I went over that limit. So, I had to exclude either Thiago Silva, Maxwell, Balanta, Vietto, Luiz or Moura from the squad, and eventually, it was an easy decision, as I was forced to get rid of Maxwell. This left the following squad:

As previously mentioned, we played seven games in pre-season, some very easy, some easy, some hard, some extremely hard. We had our fair share of ups and downs, we dominated some, got unlucky in others, we were lucky in some and just destroyed in others. Have a look at each game in detail. 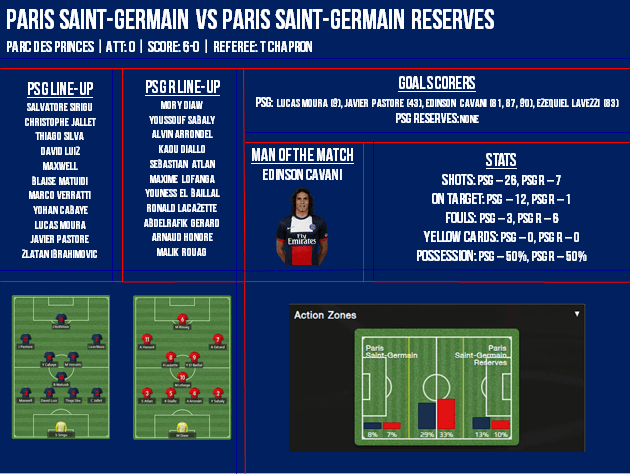 A great way to kick off our pre-season, a demolishing of our reserve team. Lucas Moura got the first goal very early on, followed by Javier Pastore grabbing the second just before half time. However, things really kicked off when I decided to bring Edinson Cavani of many others onto the field, and within ten minutes, he scored a hattrick, accompanied by Ezequiel Lavezzi scoring another within those ten minutes to make the final score 6-0. Performance Rating: 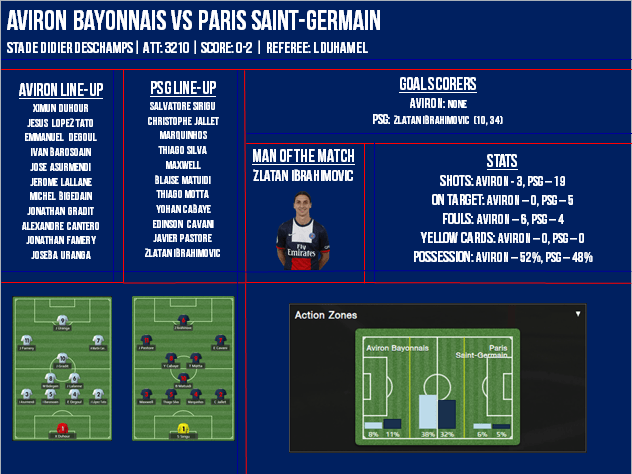 Another solid win at Stade Didier Deschamps, where we played lower league team Aviron Bayonnais. Within ten minutes, we had opened the scoring through Zlatan Ibrahimovic, and the Swedish sriker got his second not too long after, giving us a solid 2-0 win. However, we were bad in keeping possession, and it is something I am looking to work on. Performance Rating: 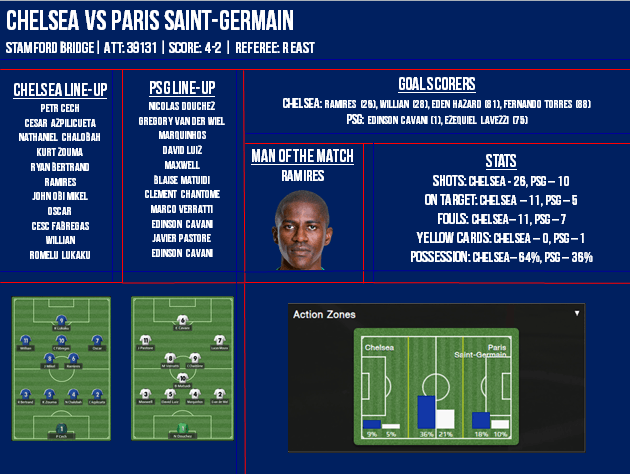 A disappointing game against Chelsea, although we did put up a fight in England. We opened the scoring in the very first minute through Edinson Cavani, but Chelsea fired back with two goals from Ramires and Willian. Lavezzi put us back on level terms, but Eden Hazard got Chelsea's third, followed by a once in a lifetime goal from Fernando Torres to make the final score 4-2. We struggled to keep possession, we were fouling more than we needed to, but we did at least but up a fight and failed to give up. Performance Rating: A game with a disappointing result, but a not-so-disappointing style of play. We kept possession more, but we were unable to finish our shots, and Lazio keeper Federico Marchetti was outstanding. Captain Cristian Ledesma scored both goals, but overall, we were unlucky to leave our home ground without netting at least once or twice. Performance Rating: 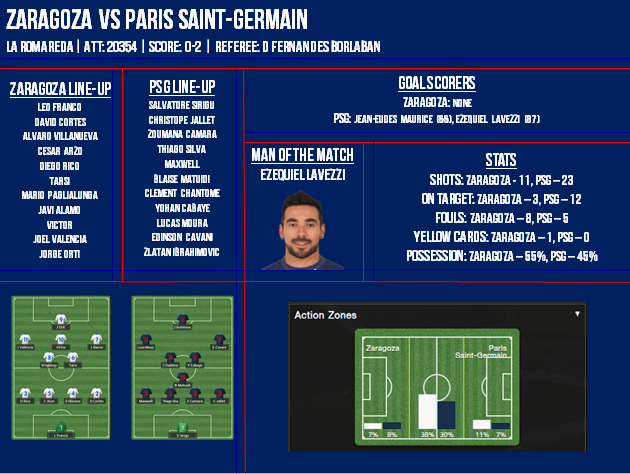 It was this game that I saw that we were fighters, and we wouldn't give up on success. After our last two defeats, one being extremely unlucky, we got back to winning ways against Zaragoza in an away game. Jean-Eudes Maurice was an unlikely goal opener in the second half, and Ezequiel Lavezzi finished the Spanish side off late in the game, and although we played some less appealing football, I have a new style of play that'll take the world by storm.
Performance Rating: An easy game against a virtually unknown French club (honestly, I thought they were Italian), and we won it 3-0. Lavezzi got two more goals, and Pastore got the third to complete the rout in just 54 minutes. Vietto, Florenzi and Balanta all made their PSG debuts, and all played rather well for their first game in blue and red. We still failed to keep possession, despite the club being much worse than us, but it's something I'll be working on come the start of the season. Performance Rating: What a terrible way to end pre-season. We had played so well against teams, and then this is how we are lead into Ligue 1, a 3-0 thrashing at the hands of Real Madrid. Morata and Jese put them 2-0 up within ten minutes, before youngster Jack Harper decided to actually be good for once and make the score 3-0. Absolutely awful way to end the pre-season, how are we supposed to cope in the Champions League?
Performance Rating:

So, that was how our pre-season went. It was a rollercoaster of a ride in just seven games, but I hope we can pick up some consistency and possession as we enter the new season.

These are the games we have in the month of August, starting with the French Champions Trophy match against Guingamp. Then, some tough games are ahead of us - Lille and Bordeaux away will be tough tests, while we cannot doubt Lorient or Lens. Still, with the squad we have at hand, we will most likely be the better team. I have devised a new tactic to face these clubs and Ligue 1, and I'm unsure if it'll work against the French sides, but it's all about experimenting this season.