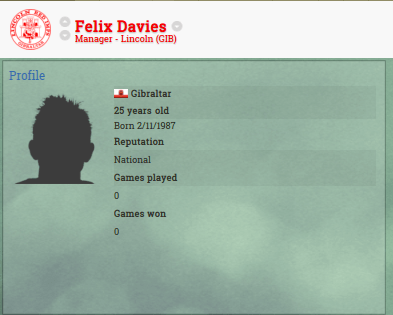 I am a fictional character I have made called Felix Davies. He was born in Gibraltar but half Engish. He is 25 years old and born on the 2nd November. This is his first job as manager

Who am I managing 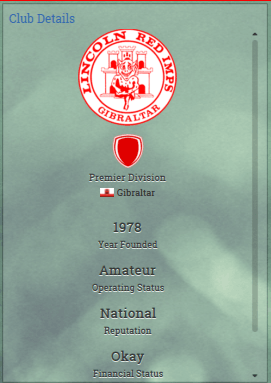 I will be managing Lincoln Red Imps in the Gibraltar Premier Division. They have won the divison twenty times with twelve of them being won the last twelve seasons. They play at the Victoria Stadium like all the other Gibraltarian teams. The Gibraltar national team is filled with mostly Lincoln players and I want to continue that with good regens coming through.

Why am I managing


I am managing them because I have been struggling for a save recently and I also have been to Gibraltar recently so why not start a story with them. Also I have never got a Amateur team profesional before so that is one of the aims.

Jamesg237
5 years
Out of interest how do you get a club to gain semi pro status? Does it go through the board? Good luck with the challenge.
Login to Quote

Happyfeet
5 years
Thank you and yeah, you ask them through a board meeting
Login to Quote

The 25 year old unknown Gibraltarian, Felix Davies has taken over the top team in Gibraltar after previous manager Michael McElwee punched the chairmen last week and was sacked that minute. The Lincoln Red Imps continued ther Gibraltar dominance with the league and cup double last season. They have won the league twenty times, including 12 in a row.

Felix Davies is a 25 year old Gibraltarian manager that has no experience in managing but hewatches his supported team (Lincoln Red Imps) every time they play so he should know roughly what he needs to improve. Davies is half English due to his mother being English.

Lincoln has Joseph, Giovanni Villa and Mark Ballester who all play in the Gibraltar National Team. There are eighteen players who play in the national side who play for the club. Lincoln is the team who is predicted to come first and that means a Europa League first round qualifying match. Most of the Gibraltar nation will support them as they are there hope in the competition.

We will see you next time for the press conference by Felix Davies and Nathan Garcia.
Login to Quote


The press conference minutes have been published by us and we hope you Lincoln fans are happy with your managers comments! He seems to be a very clever, honest and kind man. He told us what he feels to manage a team like Lincoln and his aims.

Nathan Garcia - Welcome everyone to our uveil of our new manager, Felix Davies. We are very proud to have a manager as young and full of potenial like him. We hope he can be with us for a long time.

Felix Davies - I am very happy to be in this position! Especially as its the club I grew to love when I was younger. I have supported Lincoln since I was 5 and have been to many matches. I am also excited because I think this club can achieve massively

Nathan Garcia - That is another reason why we hired Felix, he knows the club very well and he is ambitious about what the club can achieve just like me and the players at our amazing team

Press - Sounds like a great appointment for the club. How will you find it being as an amateur club?

Felix Davies - The amateur contract rule can go both ways, we can sign the best players from other clubs and they can sign ours. I know what you mean though and when clubs start coming in for our best players I will do all in my will to keep them.

Press - Are you excited for the start of the season?

Felix Davies - Of course I am! I will be playing two friendlys and then I will make my debut in the Pepe Reyes Cup. This gives me a chance to get a title under my belt straight away. Also as the league is only 14 games, I can scout and manage tactics a lot more than you can in other leagues.

Nathan Garcia - We hope Felix can start his reign with winning the Pepe Reyes cup as it will give him and the players confidence to really push on this season. We are aiming for a triple this season with the Premier Division, Premier Division cup and the Rock cup.

The press conference ended shortly after this and Felix Davies seems to be a good manager for Lincoln and we want you fans to email us or call us and give us your views!
Login to Quote

I know their seasons are quite short so whizzing through to the stage where regens are developed will be cool. Will be following
Login to Quote

(59)Kayron Lopez has escaped the Lincoln defence! GOAL 1-0 MONS CALPE, LOPEZ FIRES IN THE HALF VOLEY

(84) Garcia passes it to the left which reaches Chipolina who plays an AMAZING THROUGH BALL INTO THE ARE WHICH REACHES PITU ANES WHO FINISHES THE MOVE OFF WITH A GREAT LEFT FOOTED SHOT UNDER THE GOALKEEPER! 1-1 LATE DRAMA!

(90+3)Looks like this will be the final attack of the game. Alan Parker takes the freekick and passes to the right where Garcia works his magic TO FIND HIM IN CLEAR SPACE AND CHIPS THE GOALKEEPER! 2-1 LINCOLN!

(9)Lincoln have dominated possesion and carry on here with Joseph proceeds his run with the ball reaches the by line HES PITU ANES RUNNING INTO THE BOX AND GIVES HIM A LOVELY DELIEVERY AND ANES TAPS IT PAST REYES! 1-0 lINCOLN

(54)Keith Olivera plays a quick one two with Paul Duarte and HE PICKS OUT EIGHTEEN YEAR OLD SEAN SANTOS RUNNING BEHIND THE LINCOLN LEFT BACK, HE CUTS IN AND WHAT A GOAL! HE CURLED THE BALL PAST THE GOALKEEPER! 1-1

Felix Davies announced that Holgado will be a back up player as he didn't feel like the team had enough depth in the roles Holgado can play in. He also will have game time in the reserves this season.

Bardon is a twenty year old central midfield that Davies said was an excellent adition to a great team. He also told us that Bardon will be a starting player that will play next to 17 year old Giovanni Villa. Felix Davies was looking for a central midfielder to play next to the seventeen year old until he found Bardon.

The Italian Leonardo Vela has also joined as a back up in the same positions as Zane Holgado. Leaonardo Vela might play in the reserves for some of the season. 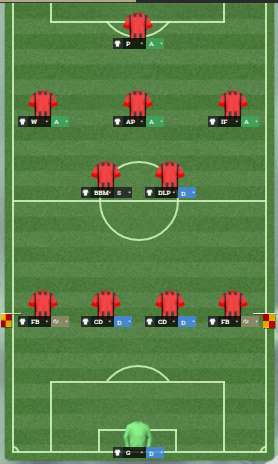 The tactic for the first season will be a simple 4-2-3-1. This will suit the team with getting all the best players to play. There is another tactic but it is just changed the two midfielders into a central midfield and a defensive midfielder.

You are reading "Rocking All Over The World".