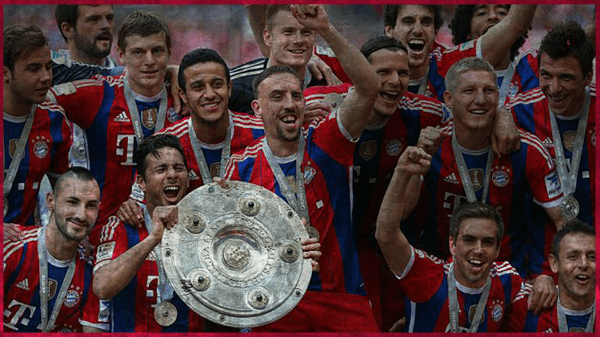 FC Bayern München is a house hold name across the globe. It is with no doubt, Germany’s biggest and most successful club, and one of the biggest in Europe. World class players pull on the Munich jersey - week in, week out - and have done since the clubs formation in 1900. Players such as Franz Beckenbauer, Gerd Müller, Uli Hoeneß and Karl-Heinz Rummenigge turned out for ‘FC Hollywood‘ in their golden age in the 1970s and 1980s, and more recently, the likes of Lothar Matthäus - Germany’s most capped player - Oliver Kahn and Bixente Lizarazu have played for the club. The current squad is also littered with players that will be considered legends when they hang up their boots, with the likes of Franck Ribéry, Arjen Robben, Philip Lahm and Bastian Schweinsteiger. However, it’s not all about the past with Bayern, the future looks very bright too. The young talents of Thiago Alcântara, Gianluca Gaudino, Mario Götze and David Alaba look promising for Bayern, and will no doubt have a big part to play in the clubs future. Led by master Pep Guardiola, arguably one of the best coaches of all time, more trophies on top of the record 24 national titles and 17 national cups looks very likely. 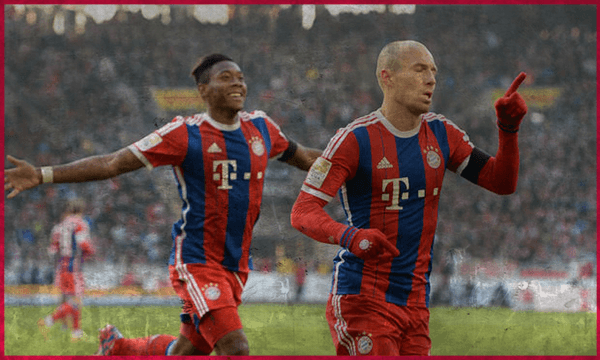 Legend and Rising Star: Arjen Robben and David Alaba celebrate a goal together

The Bundesliga looks a certainty now for Bayern, having won it comfortably the last few seasons, and the competition not looking that strong on paper, the priority for Die Bayern must be claiming the most prized trophy, the UEFA Champions League, for the sixth time in their history, but will have to battle with the likes of Real Madrid, Chelsea and Barcelona for that particular piece of silverware, a much tougher task than most people think.

However, one thing is certain. The beautiful Allianz-Arena will be rocking each time the team plays there – as Bayern have one of the biggest fan bases in the world. According to a study by Sport+Markt Bayern is the fifth-most popular football club in Europe with 20.7 million supporters, and the most popular football club in Germany with 10 million supporters, and home and away games regularly sell out.

The 2014/15 campaign for Bayern Munich will really show what the club from Bavaria are made from, as their competition for Europe’s top prize have strengthened significantly – Chelsea signing Diego Costa and Cesc Fabregas, Real Madrid bringing in the likes of James Rodriguez and Toni Kroos and Barcelona snapping up Luis Suarez – and Bayern only have one notable signing this year – Robert Lewandowski. Whether the lack of strengthening will affect the clubs performance for the upcoming season, it remains to be seen, but the side will remain competitive none the less.
Login to Quote

Fickledmycelium
6 years
Looks to be the next CM Tonton at this rate, an absolute legend of a story with the graphics and plot so far!
Login to Quote

Xander
6 years
Good luck Tal, knowing you it is very likely to be a top story. Keep it up!
Login to Quote

@Glenn - Danke
@Xander - I hope it will be a top story

Guardiola: “I am here to stay” 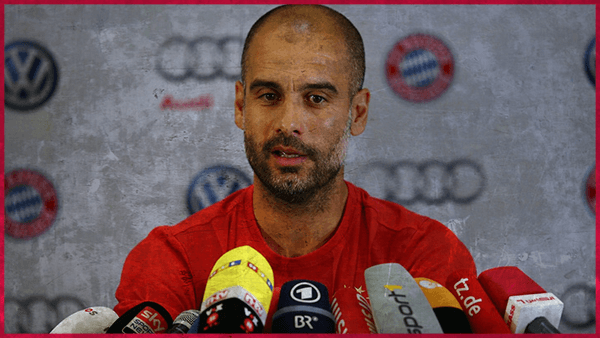 Bayern Munich boss Pep Guardiola has today confirmed that his immediate future lies with the German giants. The Spaniard was subject of speculation that he would leave his job in Germany to return to the club where he made his name – both as a player and a coach – Barcelona, following the miserable reign of Tata Martino last season, but Guardiola has confirmed that he will be staying in Bavaria.

“I am enjoying my time at Bayern, it’s a great club. My future is here. I have done what I needed to do in Barcelona and now I am here. I have only just started, we are one season in. I have no intention to leave for now.”

Pep Guardiola joined Bayern at the start of last season, replacing the highly successful and retiring Jupp Heynckes – leaving him big boots to fill. However, he certainly filled those boots, winning the Bundesliga title comfortably, while also picking up the DFB-Pokal, UEFA Super Cup and the FIFA Club World Cup, whilst going out at the semi-final stage of the Champions League.

Despite this success, things did not start well for him at Bayern Munich, losing the DFL-Supercup to Dortmund four-two. This though, could have kick started their season, not losing in twenty eight league games, meaning they had the title, not officially, but most likely secured. They also won every game in the DFB–Pokal, scoring a huge twenty-three goals and only conceded two in six games. 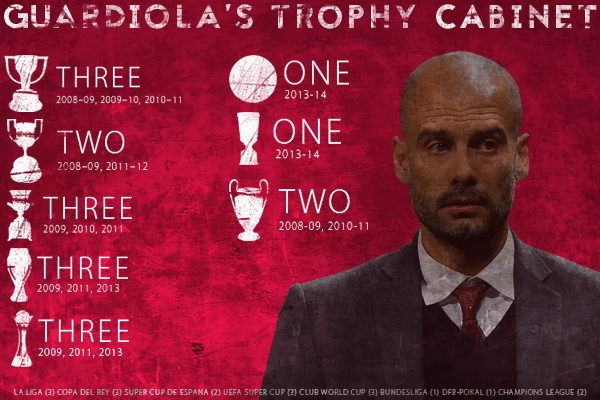 “This season, I want to build on the last. Last season was a very good season, but this season will be even better. We want to go all the way and win the Champions League. That is our target.”

The expectation for Guardiola’s second season at the helm of Die Bayern will be even more pressurised than his first, but the Spaniard has shown that he can thrive under the weight of expectation and deliver what is required, shaping this season to be one of the best in Bayern’s history.

“To achieve this, we need to make some more signings. There will be big departures and big arrivals, and nobody is safe. I have a few targets in mind, and hopefully they will prove successful. Nothing is definite yet though, but they will strengthen the side massively.”

Reports have linked Bayern to players such as Raheem Stirling of Liverpool, Marco Reus of Dortmund and Kevin De Bruyne of Wolfsburg, all of which would be a huge boost to the strength and depth of Bayern Munich’s side. Possible departures could include Dante, as the Brazilian centre-back is considered surplus to requirements, and Claudio Pizzaro is another name that is expected to be on the move.
Login to Quote 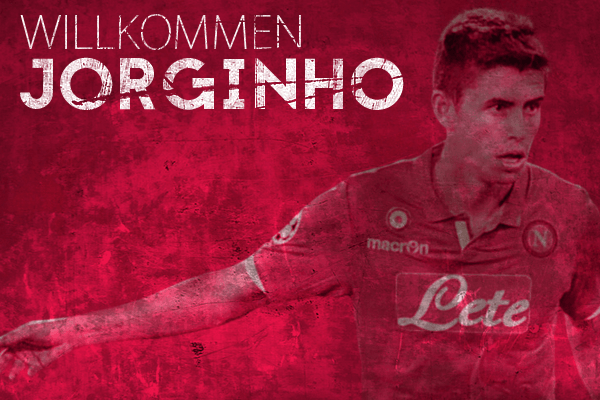 Bayern Munich have today confirmed that they have completed the signing of Napoli midfielder Jorginho. The twenty-two year olds move to Die Bayern has come as a shock to many in the footballing world. The Brazilian-born Italian joined Napoli, as part of a co-ownership with his former club Hellas Verona in January 2014, but were so keen on the signing they couldn’t wait for Napoli to buy ‘the other half’ of the player, and reportedly paid two different fees to the different clubs.

Upon joining Bayern, Jorginho – whose full name is Jorge Luiz Frello Filho – said that he dreamt of a dream to a club such as Bayern, and that the move came as a huge surprise.

“I dream about playing football for a club like Bayern, one that is followed by many across the world. It is a dream come true. When my agent called me and told me about Bayern’s interest, I thought it was a joke, but then when Guardiola phoned me, I was just in a state of shock, and it was a complete surprise.”

The midfielder moved from his native Brazil to Italy at a young age, and started his footballing career with Verona. In 2010, he was loaned out to Serie C2 side A.C. Sambonifacese, where he played his first full senior season, appearing thirty-one times and scoring one goal whilst providing ten assists from his central midfield position. This impressed his parent club, as the next season, he was included in the first team, and on the 4 September 2011, he made his debut for the club, in match against Sassuolo as a substitute in the 76th minute. He went on to make ninety-six appearances and net eleven times in four years at the club, helping the club get promoted to Italy’s top flight. 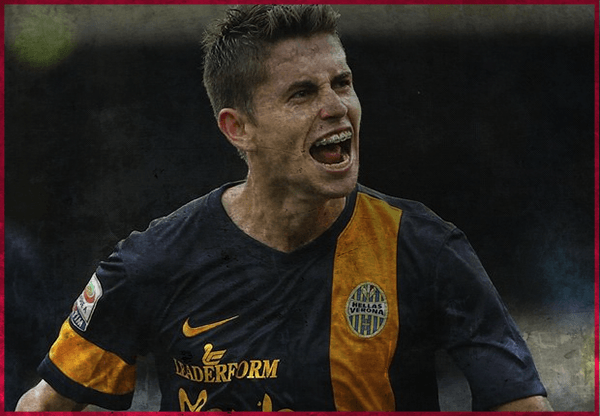 From ‘Hellas’ to Heaven: Jorginho playing for Verona

A move to Napoli then followed after an impressive season, where he signed a four and a half year deal with the club. He made a total of fifteen league appearances in the half season he spent in Naples, before securing his move to Munich.

Pep Guardiola was very pleased with his new signing, telling the club’s official website that he is just what he was looking for.

“Jorginho is a very good player. His passing is very good and his vision is very good. He is the player we have been looking for, and has plenty of room to improve, as he is still very young. He will go on to have a very bright future with us.”

Where he will play for Die Bayern remains to be seen, but he is likely to partner vice-captain Bastian Schweinsteiger in the centre of the park, something that Jorginho himself is looking forward to doing.

“To play at this club means I will play with some world-class players, and I cannot wait to play with Bastian [Schweinsteiger]. He is a legend and one of the best at what he does, and I can learn a lot from him. He is a Champions League winner and a World Cup winner, and has lots of experience.”

The fee paid in total was reportedly £13.5million, in which Napoli received the biggest fee – a figure around £8.5million, and Verona received around £5million – making Guardiola think that he has got a real bargain.

“For a player of his potential, the fee we paid is a bargain. We thought he would be expensive, and the first price we got back was, but somehow, we managed to bring it down to get ourselves a real bargain.”

Napoli manager Rafa Benítez was very happy for Jorginho, but said he needs to be careful and listen to Guardiola.

“I am very happy for Jorginho, he deserves his move. But, he is still young and needs to be careful not lose himself in the life that comes with playing for a club like Bayern Munich. He needs to listen to Guardiola and the other senior members of the Bayern squad, as they know what is best for a player like him.”

Jorginho will team up with the Bayern squad on their pre-season training camp in Austria, and will be available for Munich’s pre-season game against Red Bull Salzburg.

Jack
6 years
Yet another great update, great signing in Jorginho, he'll do well for you!

TaroMisaki
6 years
Great start to the story and as always really nice graphics there!
Login to Quote

Tallery
6 years
@Jack - hopefully he will, I need him too