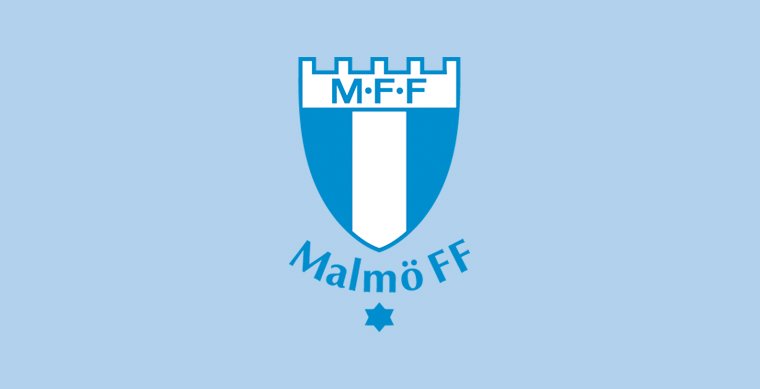 The goal is simple. Dominate the Swedish premiership while establishing ourselves as our nation’s top club in Europe.

The board has given us a transfer budget of 25 million Swedish krona from now on SKR with the expectation of winning the league and being competitive in the European clashes.

Robin is a behemoth goalie standing 1.98 meters tall and weighing in at 88 kg. He’s a commanding presence in the air and one of the best players MFF has to offer. At the beginning of the game Robin’s contract runs out in 2015 but I managed to sign him to a 2 year extension at 95k SKR/month which is an utter bargain considering his immense talent!

What Wolff lacks in physicals he more than makes up with his superior technical skills, a great playmaker on the midfield who continually wins the ball and sets up attacks this norweigan midfielder is new to the city of Malmö having signed a contract in January of 2015.

The one and only. The striker, the legend, our captain and commander – Markus Rosenberg. He paved the way for our run in the Champions League and he has said that he wants to finish out his career with the club he grew up in, if he can produce like he did in last year we will be well off. 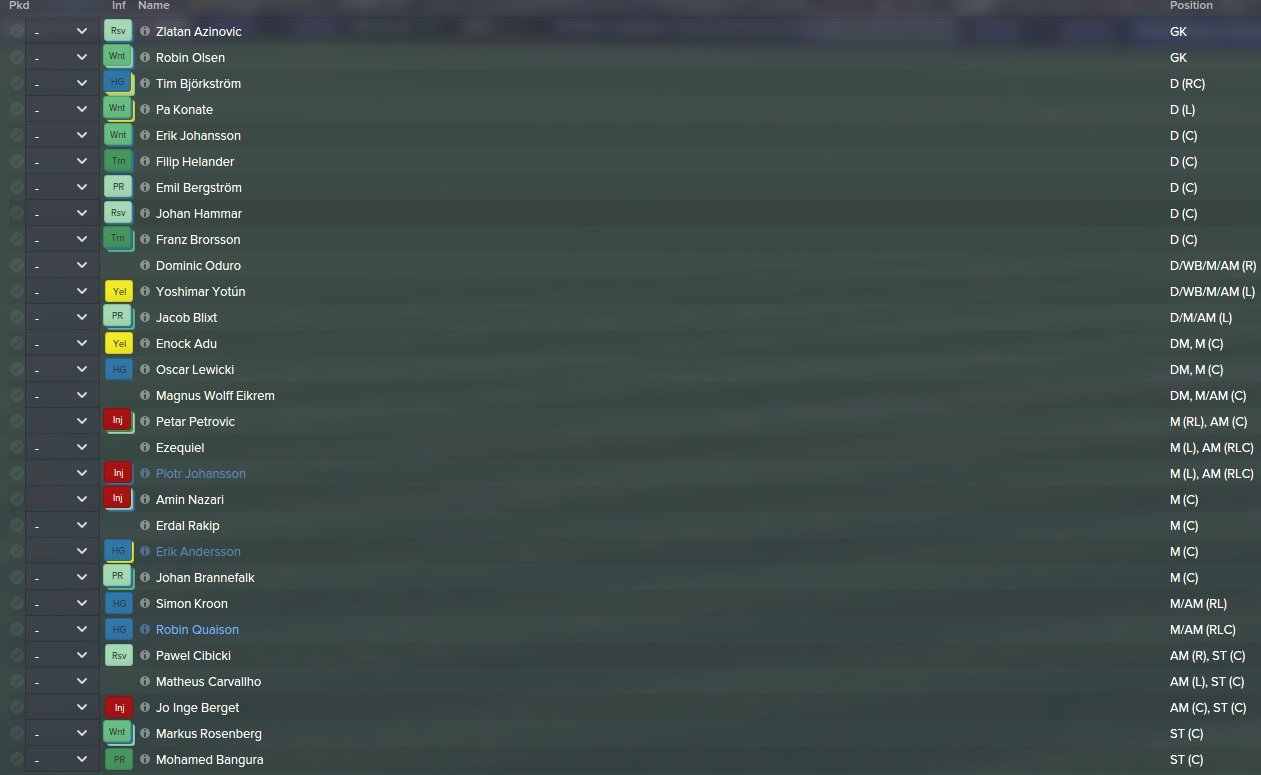 Next up: Pre-season
Login to Quote

WingDing
7 years • Edited
Hey guys, so yeah, fucked up with the formatting straight off the bat! Good stuff! Figuring it out now and will get it up and running properly soon!

EDIT: There we go! All done! Any feedback and/or critique is welcomed since this is my first post in an FM forum ever and my first ever story.. not really new to the whole FM thing though, been playing on and off since 2001, but yeah this will be a whole new deal.
Login to Quote

Just a tip though, instead of writing SKR maybe you should write currencies in €, $ or £. Makes it easier to relate to the amounts mentioned if you're not familiar with the Swedish currency. Otherwise write it as SEK as it is the correct abbreviation. Good luck with the story!

walkinshaw
7 years
Domestically should be wrapped up with their squad and finances but Europe will be something different all together so good luck bud.

Elfsborg are my go to Swedish side so hoping they can pip you to the league lol.
Login to Quote

Our first training match was at home against Dinamo Moscow with a final result of 2-1, it was a pretty decent performance on our part, rusty for sure but definitely something to build upon. Scoring for our side were Markus Rosenberg and Jo-Inge Berget.

We then kicked of the Swedish Cup against Utsikten, a division 1 side, we swiftly dismissed them with an easy 3-0 win.

Another friendly, another 3-0 win, this time it was an away fixture against Högaborg. Scoring were Adu, Molins and Rosenberg!

We met resistant in the Swedish Cup in the form of Varberg BoIS and ended up being defeated with 2-1, this was not expected and meant that we would now have to beat Sundsvall in our final match-up in the Cup to make sure we went on the play in the quarterfinals. Some early hiccups for sure and we were not playing up to par!

We then played another training match – this time against Norwegian side Vidar – again we managed to come up with the short end of the stick, losing the game 1-0, not the result I wanted going into the game with Sundsvall.

We really needed the boys to step up in this one and deliver some fireworks! We were at home at Swedbank Stadium in front of 10 000 fans. Things started of slow and neither side really managed to create any chances! The first half came to a disappointing 0-0 end and Tobias Vilde ushered on his side to go out on to the pitch in the second half and show some passion for the fans!
The squad fired up and Tetteh Bangura scored a goal after only 5 minutes to clinch the lead, assists coming from Anton Tinnerholm and Markus Rosenberg.

It didn't take long for Sundsvall to reply equalizing the game just two minutes later after a shot off the bar hit Robin Olsen in the back for an own goal. Neither side created much after these two goals and desperation reeked from the Malmö side as they were forced to push forward and attack!

Markus Rosenberg then showed his quality with two excellent strikes in succession, first a hard shot to the net from 25 meters out, followed up with a similar strike just 5 minutes later! Guillermo Molins then secured our victory with an excellent goal from close range after outpacing several Sundsvall defenders! Writing up the total to 4-1 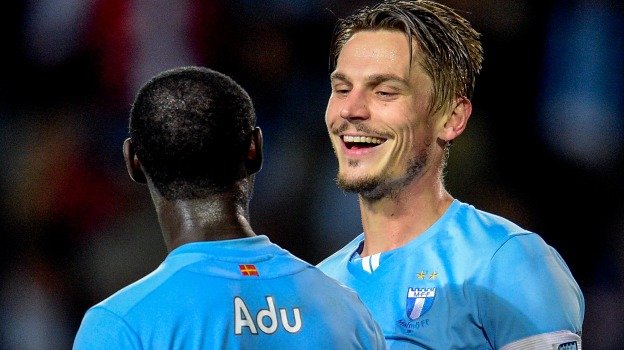 Rosenberg celebrates one of two goals against Sundsvall, here with Enock Kofi Adu

Our last pre-season fixture was against Häcken, the second and last premiership side we were facing before kick-off and the seriousness started, I wanted a win badly! And the boys delivered in sure fire fashion following up their 4-1 win against Sundsvall with a 4-2 showing versus Häcken.

Just a tip though, instead of writing SKR maybe you should write currencies in €, $ or £. Makes it easier to relate to the amounts mentioned if you're not familiar with the Swedish currency. Otherwise write it as SEK as it is the correct abbreviation. Good luck with the story! :D


Cheers buddy! I shall write it as SEK from now on. I don't know why but I always play with the local currency whenever I have a save, habit I guess!


Thanks man! Needed to get those wins to build some confidence!
Login to Quote


In a chilly and breezy afternoon game in early April infront of 7500 people in Kalmar the reigning premiership title holders Malmö FF kicked of their 2015 season against Kalmar FF.

Both teams came out tentatively and whilst Malmö FF were the dominant team in creating chances, they could not succeed in creating anything that was of any real danger. Tobias Vilder once again had to urge his team on during half time and once again the move paid off as Guillermo Molins took the opportunity after Erik Johansson had struck the post following a corner. The team then seemed to kick up the tempo a notch dominating the game and creating chance after chance but a brave Kalmar defense stood up well! It wasn’t until the 91st minute that saw Anton Tinnerholm hit a crosser to Jo-Inge Berget and secure our first win in the Premiership 2-0! 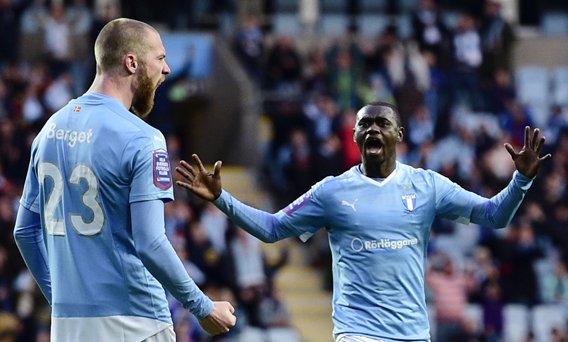 
After two not so great games to start the season with narrow wins and a lot of misses we went to Gothenburg to face BK Häcken in the Swedish Cup quarterfinal! It was a firework performance seeing Guillermo Molins cap two goals and Tetteh Bangura grab one as we took down Häcken, 3-0.

We drew Hammarby in the semifinal and we only had one match against Elfsborg away before that clash..

We swiftly put Elfsborg away opening the goal scoring only 7 minutes in after a miscommunication in the Elfsborg defense led to Jon Jönsson passing one in to his own goal, Rosenberg then missed a penalty only to redeem himself only minutes later by scoring a beautiful header. Filip Helander then scored the final goal 3-1 on another header coming from a freekick.


In what would be a gritty and hard fought battle between two good football sides infront of almost 26 000 people in Tele2 Arena. Malmö came out swinging hard trying to maintain possession and force Hammarby to play to their tempo.. the move worked and Markus Rosenberg got the match-ups first real chance when he was tripped and awarded a penalty. He stepped up to the spot himself, struck the ball and missed wide.

He would again redeem himself just minutes later when a crosser from Adu came his way, he struck it hard and decisive and Hopf, Hammarbys goalie stood no real chance of saving it. 1-0, MFF!

The game after that turned into a battlefield in the trenches where possesion were mostly swapped in the midfield area. A very determined Malmö defense kept Hammarby at bay for the remainder of the game and Malmö FF were through to the Swedish Cup final after a 1-0 result!

Our first 9 matches of the season saw us win 8 and only lose one! A great and convincing way to start the season!

Next up: Swedish Cup final and Champions League qualification fixtures
Login to Quote

LLMCrumble
7 years
Wonderful start to the season, good luck with keeping up your form

Göteborg came out firing hard and caught Malmö off guard. Malmö seemed complacent and really didn’t fight as hard as they should or could. And Gothenburg capitalized on this in the first half and Mikael Boman scored 1-0 with a clinical strike.
In half time Tobias Vilder went nuts basically telling his players to STEP UP or get out. The team responded by showing a little more passion and taking over possession, luring Göteborg to playing to our tempo. Still our ineffectiveness infront of goal hindered us from scoring early on in the second half.

But a goal was imminent! MFF was pressuring and forcing their way into the game and Tetteh Bangura tied the game up 1-1 with a nice strike from 10 yards out, assisted by Molins.

In the closing minute of the game as time were running out and the game seemed to be going to overtime, Göteborg delivered heartbreak when Mikael Boman scored a late header on a cross from Lars Vibe.

Champions League. The goal for this season, standing between us and the third qualification round, Bosnian Premier League winners Zeljeznicar.

In a match-up where we dominated but were incredible ineffective our play from the Swedish Cup Final perhaps spilling over to this match would see us grab an early lead through Ezequiel. It would then be a very frustrating game where MFF dominated both possesion and clear cut chances but failed to capitalize.
The 1-0 result would linger to the 89th minute when Tetteh Bangura scored for us again, making it 2-0 and giving us some breathing room for the game at Swedbank Stadium.

There would be no drama. No Bosnian heroes. There would be only Swedish effectiveness as Malmö put the Bosnian side away easily 3-0, scoring for MFF were Helander, Kroon and Berget
.
Champions League Qualification round 3 draw:

In what would turn the stomach of every Malmö FF fan the Swedish side drew....

Next up: Salzburg
Login to Quote

You are reading "Malmö FF - The Quest for Europe".