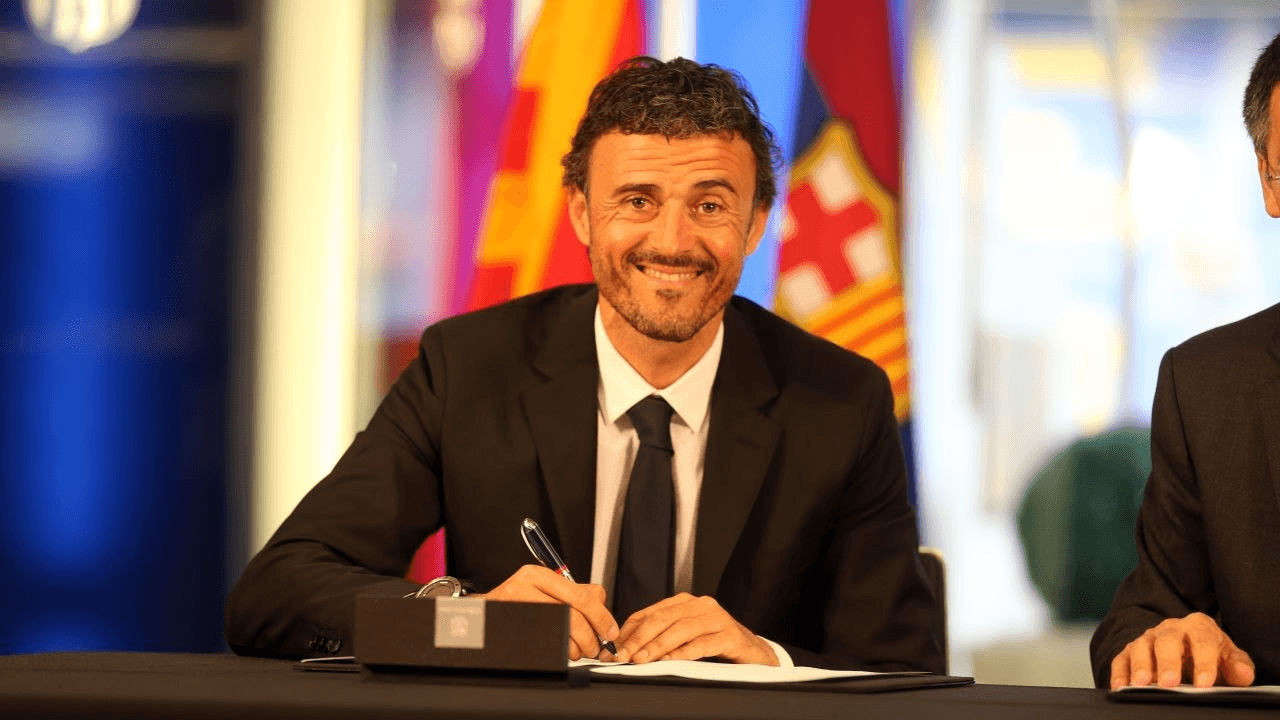 Luis Enrique on his Barcelona unveiling

The Spaniard, only confirmed the new boss of the Catalan giants two weeks ago, has shocked the footballing world with his sudden decision to leave the post that he seemed delighted with when he was unveiled.

A short statement on www.fcbarcelona.com said that the search for a new manager would start with immediate effect so they had someone appointed before the start of the new season.

We are sad to announce that new appointed boss Luis Enrique has asked to resign from his position as FC Barcelona manager with immediate effect. We want to thank Luis for the work he has done for the club in the short period of time he has been with the club in this capacity. We will start a search immediately for a new manager to make sure very little time is lost this season.


Who is Luis Enrique? 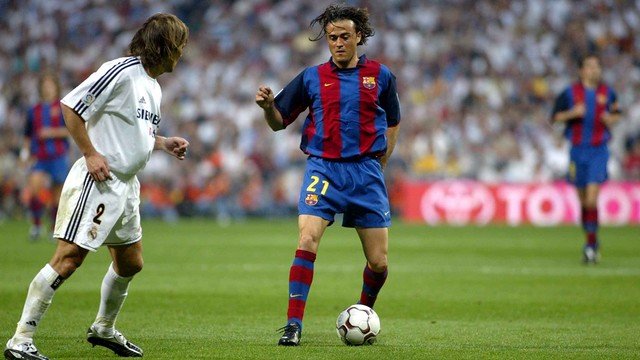 
Enrique started his career in football as a player; with his hometown club Sporting Gijón in 1988, turning out for their B team for two years before making the step up to the first team in 1989. Making his name as a right winger, he went on to play thirty-six times for Gijón, netting fourteen times, before securing a move to one of the biggest clubs in Spain – Real Madrid – in 1991.

His stay with the Los Blancos lasted five years, in which he played one-hundred-and-fifty-seven league games and scored fifteen. Once his contract with Real expired in 1996, he signed with rivals Barcelona on a free transfer, and despite sceptical views at first from the Catalan club’s supporters given his time with their fierce rivals, he quickly cemented a place in the culers' hearts, staying eight years with the club, eventually becoming team captain and scoring several times in El Clásico against his former employers; whilst with Real Madrid, he notably scored in a 5–0 home win against Barcelona, but stated later he "rarely felt appreciated by the Real Madrid supporters and didn't have good memories there".

In his first three seasons with Barcelona Luis Enrique netted 46 La Liga goals, with Barça finishing runner-up in 1996–97 and subsequently winning back-to-back domestic championship accolades. Furthermore, he was named Spanish Player of the Year by El País in the following campaign. He also scored the opening goal in the 1997 UEFA Super Cup, a 3–1 aggregate triumph against Borussia Dortmund.

During his final years in Barcelona Luis Enrique was often injured, and did not want to renew his contract. He had been offered a contract by his first club Sporting, which he, however, declined, stating that "he wouldn't be able to reach the level he demanded of myself" and that "he wouldn't be doing Sporting much of a favor by going there." His concerns about his level and fitness made him retire on 10 August 2004 at the age of 34, and he finished his professional career with league totals of 400 games and 102 goals.

He also played for his nation, Spain, during his career, earning sixty-two caps between 1991 and 2002.


In June 2008, it was announced - four years after he hung up his boots – that he would be the successor of Pep Guardiola as manager of Barcelona B. He had success in charge of the side, helping the club return to Segunda División in his second season, after an absence of 11 years.

In mid-March 2011, Luis Enrique announced his departure from Barcelona B at the end of the campaign, despite still having two years left on his contract. He led the side to the playoffs, but it was ineligible for promotion.

He then joined Italian side AS Roma in June 2011, signing a two-year deal with the Italian giants. His spell ended after Enrique decided to leave the club at the end of the season, as the Il Giallorossi didn’t qualify for a European competition.

In June 2013, Enrique made his return to management and to Spain, as he signed a two-year deal to manage Celta de Vigo. He led the Galicians to the ninth position in his first and only season, highlights including a 2–0 home win against Real Madrid that ended the opposition's possibilities of winning the league title. On 16 May 2014, he announced that he would be leaving Celta.

On 19 May 2014, it was announced that Luis Enrique would return to Barcelona as a manager, after he agreed to a two-year deal. He was recommended by sporting director Andoni Zubizarreta, his former national teammate. However, this spell only lasted a few weeks, after he announced his resignation.


The front-runner to take over is thought to be current Bayern Munich boss Pep Guardiola, who is reportedly keen on a return to the club where he had so much success as both a player and manager. Other contenders are thought to be former player Michael Laudrup and Napoli boss Rafa Benitez.
Please note for a period of about two weeks, this will not be updated regularly, but after that, I should be ready to go!

Jamesg237
6 years
It will be interesting to see if you can continue the Barce legacy although I can't see it being much of a challenge!
Login to Quote

Tallery
6 years
@Bayern: Think it will be a relative surprise

@Maximus: I am back, yes

@Zap: I would expect nothing less

@Feliks: Its Barca, come on

@Justice: Stop with the witty comments, your showing my update up

@James: I am certainly trying too, well thats the aim, anyway 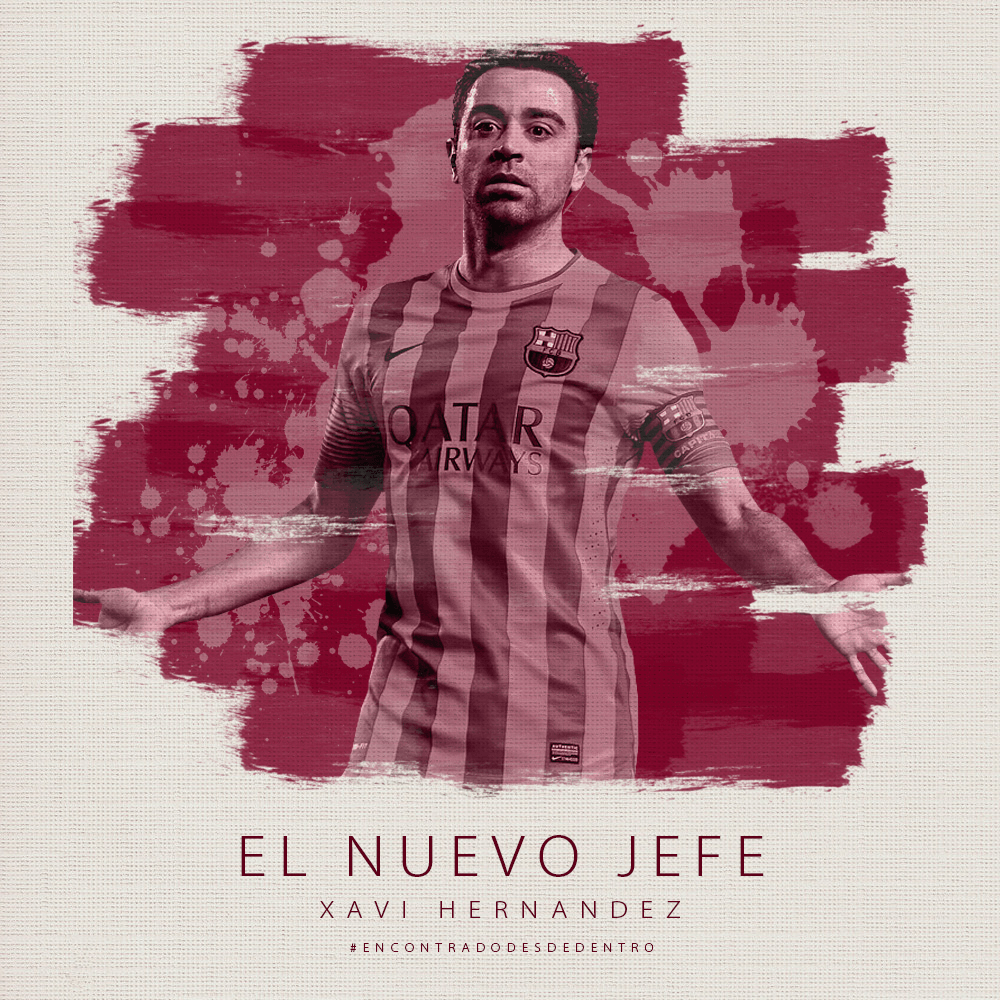 Xavi is unveiled as the new Barcelona boss


Barcelona have announced that player Xavi Hernandez will take the reins at the Catalan club. The 35-year-old will hang up his boots to take to the touchline, it’s been confirmed. Xavi, the most decorated player in Spanish history, will be hoping that he can replicate his success as a player in charge of his boyhood club.

A statement on www.fcbarcelona.com announced that the former midfielder has signed a yearlong contract.

We are delighted to announce that Xavi Hernandez will be taking the vacant managerial role at the club. Having been at the club since the age 11, he knows what this club is about and we are sure he will return Barcelona back to the top of world football, where Barcelona belong. Despite his lack of managerial experience, we truly believe that he is the right choice for the club short-term and long-term.


The appointment of the Barcelona legend will come as a shock to the footballing world due to Xavi having very little experience of managing a club of the stature of Barcelona, but this doesn’t seem to concern him, as he told the club’s official website.

”My inexperience? It won’t be an issue, I have had the opportunity to learn from some of the best coaches ever. I feel that I am ready. The upcoming season would have been my last, but to be offered this opportunity is amazing, and I am so happy that I will be continuing with Barca. I want to make my time here even more unforgettable, for myself, my family and the fans.” 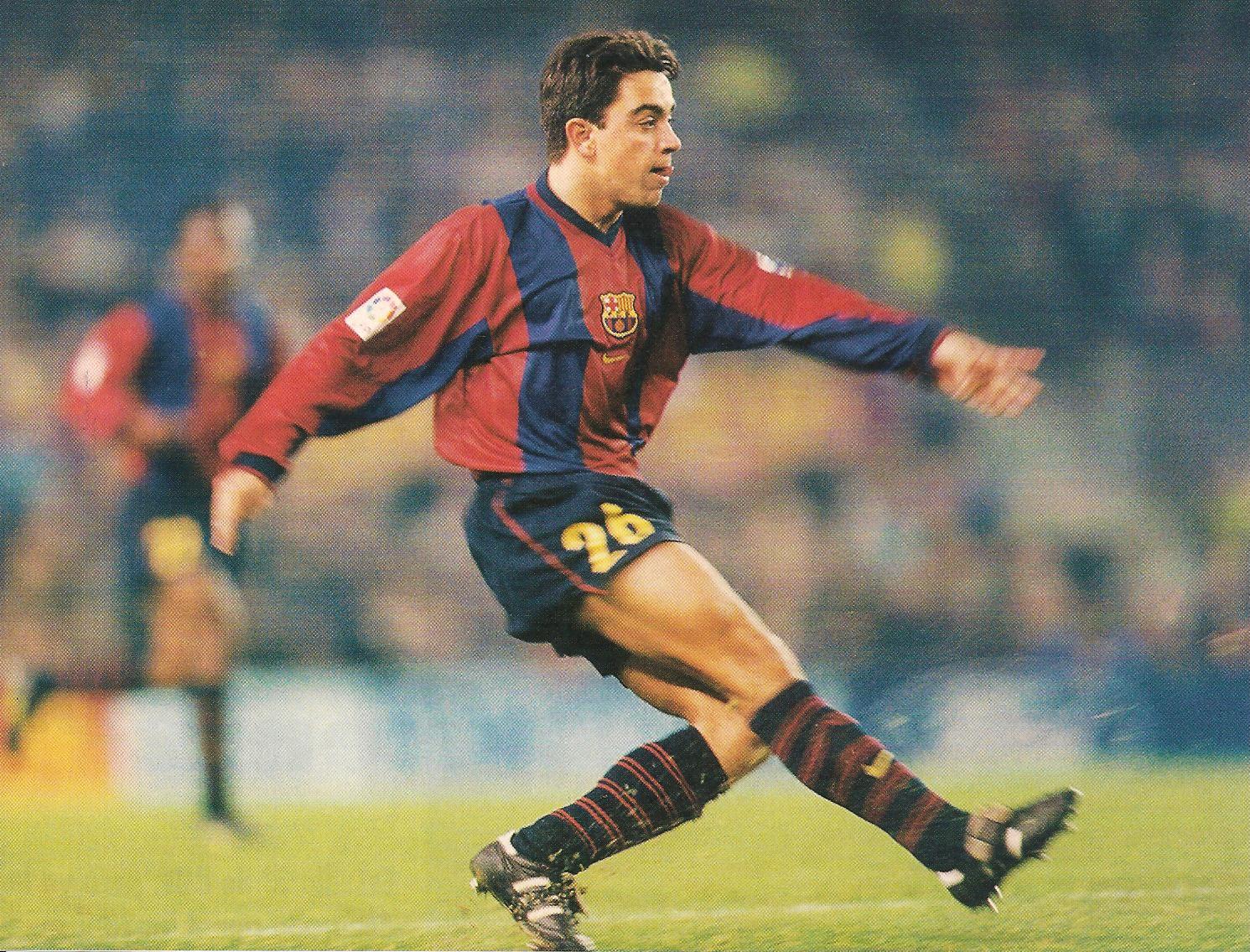 Xavi playing in his early years


Xavi started his career with Barcelona aged 11, progressing through the world-renowned La Masia youth system. He made his way through the ranks, and made his debut for Barcelona B 1997, and made regular appearances for the side until 2000, but made his Barcelona first team debut in 1998, and scored and he went on to be named La Liga Breakthrough Player of the Year. He was also a member of the FIFA World Youth Championship–winning team in 1999, and earned a silver medal at the 2000 Summer Olympics.

By 2004-05, Xavi was a leader of a talented Barcelona side that featured fellow La Masia products Carles Puyol and Andrés Iniesta, as well as Brazilian stars Deco and Ronaldinho. Xavi's style was considered an embodiment of the passing and moving techniques taught in the Barcelona system, and it was effective enough lead Barcelona to league and Super Cup wins in 2005.


Torn knee ligaments forced Xavi to miss most of Barcelona's La Liga–winning season and Champions League victory in 2006, though he helped the club win another Super Cup that August.

Xavi's profile received a boost with his performance at the 2008 European Championship, when he scored in a semifinal victory over Russia and assisted on the lone goal in the final vs. Germany to earn Player of the Tournament honors. It was the start of an amazing stretch for the outstanding midfielder and his Barcelona teammates, who went on to win a staggering six titles in 2009. Afterward, Xavi finished third in voting for the Ballon d'Or award for the first of three consecutive years.

With so much success under his belt, it was only a matter of time before the playmaker secured the top spot in the record books of his club and his country. In January 2011, he set a record with his 550th career appearance for Barcelona. A victory in the 2013 Super Cup gave Xavi 25 career titles, tops among Spanish players.

macdab55
6 years
Nice beginning of the story. Good luck with this.
Login to Quote

Justice
6 years
He has the respect, but does he have the Xavi (savvy) to outwit fellow managers?

Iconic
6 years
Brilliant writing and detail, and well what can I say? Your Graphics are incredible, keep it up!

swanny8589
6 years
cant wait to see what Xavi has to offer, will you be keeping the famous Tiki-Taka or changing the style of football
Login to Quote