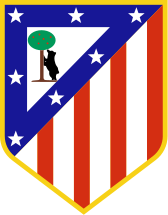 Club Atlético de Madrid, SAD also known as Atlético de Madrid or Atlético, is a Spanish professional football club based in Madrid that plays in La Liga. During their history, the club has been known by a number of nicknames, including Los Rojiblancos ("Red-and-Whites"), due to their first team strip consisting of red and white stripes. Atlético Madrid is the fourth most successful club in Spanish football, behind Real Madrid, Barcelona and Athletic Bilbao. Atlético have won La Liga on ten occasions, including a league and cup double in 1996; the Copa del Rey on ten occasions; 2 Supercopa de España and 1 Copa Eva Duarte. In Europe, they won the European Cup Winners' Cup in 1962, runners-up in 1963 and 1986, were European Cup runners-up in 1974 and 2014, won the Europa League in 2010 and in 2012, won the UEFA Super Cup in 2010 and 2012, won the Intertoto Cup in 2007, as well as the 1974 Intercontinental Cup.

The Vicente Calderón Stadium is the home stadium of La Liga football club Atlético Madrid and is located in the Arganzuela district of Spanish capital Madrid and currently has a capacity of around 55,000. The stadium was originally called the Manzanares Stadium, but this was later changed to the Vicente Calderón Stadium, after the famous Atlético club president. The seats are laid out in red and white stripes, the colours of Atlético's shirts. 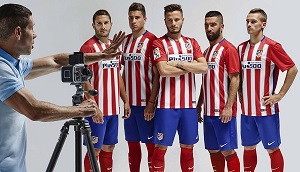 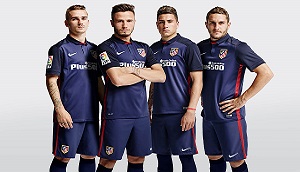 The new Nike Atlético Madrid 2015-2016 Home and Away Kits are inspired by the shirts worn in the 1995-96 season, when Atlético won the league and cup double. The front of the new Atlético Madrid 15-16 Home Jersey features the traditional red and white stripe design with four white stripes and five red stripes, while the back is solid red. Similar to Atlético's 1995-96 shirt. Plus500 and Atletico announced a two-year sponsorship deal on June 24, replacing previous main sponor Azerbaijan. Nike again makes the new Atlético de Madrid 15-16 Kit.
Login to Quote

Tallery
7 years
Nice start, hopefully this can be as good as Milan.
Login to Quote

@Tallery: Thanks, hopefully i can replicate the success i had with Milan

@Jer: Thanks for the support mate

Atlético Madrid manager Diego Simeone has called for a press conference to be held inside the clubs training ground. No one is quite sure what will be talked about during the upcoming press conference but many are speculating that a new signing is about to be unveiled by the club, which would show serious intent from the Spanish club with the new season not starting until three months time. It is believed that Atlético Madrid president Enrique Cerezo will join Simeone at the press conference.

Reporter: Good Morning! So many of us are wondering why you have called a press conference, could you give us your insight into the reasoning behind this press conference?
Simeone: First of all Ladies and Gentleman I would like to thank you for being here this morning. Erm.. This is a difficult decision that I have had to make but I feel it is the right one.. I have decided to end my reign here at Atlético Madrid.


Reporter: Wow! I'm shocked.. Could you give us an explanation as to why you have resigned?
Simeone: Unfortunately back home in Argentina my family is having a difficult time, with my mother being seriously ill and my father not coping. I feel that I need to be there with them so I can help look after them. It's difficult because of course i want to stay but I feel that I wouldn't be able to perform at the best of my ability, while worrying about my family back home.


Reporter: It's going to be sad to see you leave.. What are some of your best and most proud moments at the club?
Simeone: I think being able to have managed this fantastic club is my proudest moment, take away all the trophies and championships and it would still be the proudest moments at the club. Of course trophies are nice but they are what the players win, I am just here to help them achieve them.


Reporter: Mr Cerezo.. If I could just ask you, how much of a fantastic job has Diego done at this club and do you feel that he has left a legacy at this club?
Cerezo: Diego, for me is the greatest manager in the world. The things he has accomplished at this football club is incredible and we owe him everything for where the club is now compared to where it was before he arrived. It's going to be sad to see him leave but we fully understand his decision, we had a very productive chat prior to today, about what should happen after he leaves.


Reporter: So Diego.. Does this mean that you will be picking the new manager to take over from you?
Simeone: No, No.. I have talked with the board about who I would like to see take over but that doesn't mean they will listen. It's their decision as to who they decide to pick as their new manager but of course I can always have my thoughts and opinions.


Reporter: So Mr Cerezo.. Do you know already who will be taking over as manager and could you give us any indication as to who it may be?
Cerezo: Unfortunately, I cant give any names but we have our preferred targets in mind. We will have another meeting some time later this week and discuss further where we feel the club should go from here and we will make an announcement in due course.


Reporter: Diego, we would like to thank you for answering our questions this morning and we wish you and your family all the best for the future.
Simeone: Thank you!
Login to Quote

I liked Simeone, great update though!
Login to Quote