The team have not won a League title since 2006, making it almost ten years. In a league where capital investment is rife, it is hard for a club to thrive without the financial input of a parent company. Suwong Samsung Bluewings and Jeonbuk Hyundai Motors are the two best teams in the league, partly due to their spending power.

I am Yong Han Kyo, newly appointed manager of Seongnam football club and I have a three year plan to take the K League Classic title. If I can't do this, I have failed.
Login to Quote

Yong Han Kyo has taken the South Korean sporting world by storm after releasing a statement just minute after becoming manager of Seongnam Football Club at just thirty-five. In this interview, we explore the young manager's ideals and mindset for the season to come.

Welcome Kyo. You must be revelling in all this attention.
In all honesty, no. I'm just taking it in my stride and continuing as I would normally. Just because it's my first managerial job doesn't mean that I will crumble under the pressure or that the attention will put me off. The only thing that has surprised me is wishes of good luck from managers from the West. I hadn't considered our league was watched much in Europe.

You have no experience and this worries some fans. What should they expect?
I'm not going to come out and say they have nothing to worry about. The Seongnam board took a big risk in appointing me as their manager but anything they had been trying over the past few years was not that successful. There was relative success, but not what the fans wanted. They should expect to see me finding my feet, and hopefully an attractive style of football. In three years I hope to have lifted the title.

That is a short time span for a huge task.
If I can't win the league within three seasons, then I'm obviously not suited to managing the side. The players are good enough so why can't it be possible?

Coming from a rich background, how do you think this will help your managerial career?
My upbringing has nothing to do with it, although I think I will be able to manage finances quite well due to it.

What are the ideals you'll be managing the side with?
I want to play attacking football, and I also want to try and avoid using foreign players. I know they are a part of the game and if the right player comes along I'll break my rule. But I do really want to build a squad of home-grown South Korean talent and hopefully that will benefit our national side and (also we will) see more of our players in the big European leagues.

To read MORE of this exclusive interview with Yong Han Kyo, click 'here'.
Login to Quote

Anyway good luck in what was a league full of great youngsters a 4-5 years ago bud.
Login to Quote

Nick_H
7 years
An interesting save, you really see K-League saves so I'm looking forward to what this has to offer.
Login to Quote

Griffo
7 years
Very interesting, I will be following!
Login to Quote

Khaleesi
7 years
@walkinshaw Hopefully the league will be revived with youngsters soon!

@Nick_H / @Griffo Thanks, I hope you enjoy it!
Login to Quote 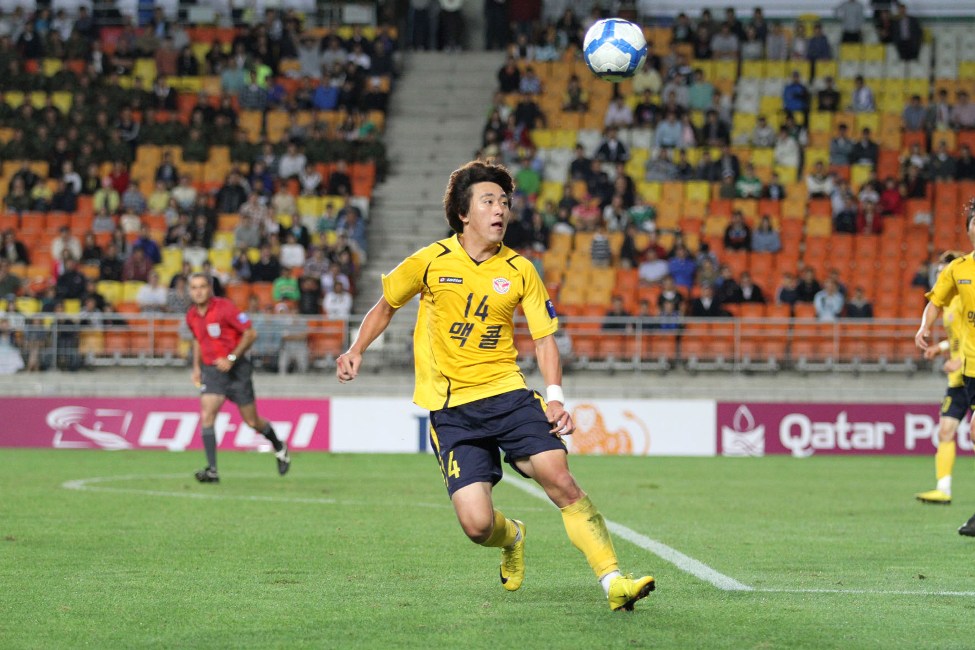 
In an exclusive story, sportKOREA can reveal that Song Ho-Young has returned to Seongnam football club after leaving four years ago. The player has started for four teams since, but has proved his loyalty to the club by returning to the revolution of the club.

The twenty-seven year old right-winger has joined on a free transfer and will earn ?2617024.62 per week, which is around £1,500. The team were short on back up wingers and Song Ho-Young ticked all the boxes, as he is a Korean national, has experience in the league and has even played for the club before.

At his press conference, sportKOREA asked him two simple questions.

So, why return? Why Seongnam?
It's a beautiful city and a great team to play for. I believe I will be treated fairly and equally at this club and I hope the manager will be impressed at what I have to offer.

What is your opinion of Yong Han Kyo?
I have obviously not heard of him before, but after meeting him - his whole demeanour is vaguely interesting. He's extremely cautious and coy, but he is also extremely charismatic and does not seem like a person you would want to be on the wrong side of. I guess I should tread carefully around him!
Login to Quote