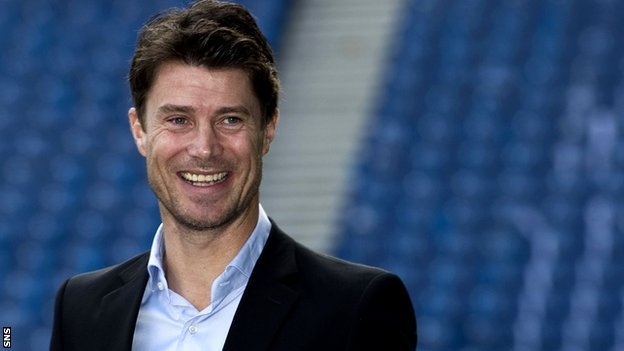 Danish Superliga side Brøndby IF have announced that national legend Brian Laudrup will take his first venture into management by replacing Thomas Frank at Brøndby Stadium.

Laudrup, 46, has no experience in management up to this point but chairman Jan Bech Andersen is confident that the experience and knowledge he has gained from his impressive playing career will more than make up for that.

"I think that Brian coming in here is a terrific sign for this club. Of course it is a small risk given that he hasn't managed a team before, but everyone has to start somewhere and I think this could be the start of a wonderful partnership.

Brian was an incredible player and played for some top teams, but he has got a connection to this club. It was here where he started out his career and he has a passion for this club and its supporters."

Brian's brother Michael managed Brøndby for four years between 2002 and 2006, winning the league once and picking up a few cup wins on the way. Brian Laudrup will be hoping his reign in Denmark will be as successful as his older brother, if not more so.

In recent years Brøndby have slipped away and it was in fact Michael Laudrup who led them to their last league triumph in the 2004-2005 season.

Brøndby fans will be hoping that managerial success runs in the Laudrup family blood as Brian gears up for his first season in charge with the club also competing in the Europa League after finishing third last year.
Login to Quote 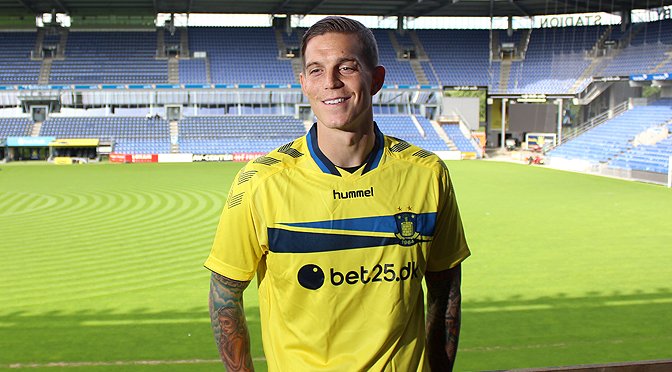 Ex-Liverpool defender Daniel Agger has been named as captain of Brøndby by new boss Brian Laudrup but the 30-year-old will miss two months of action through injury.

Agger, who also captains the Danish national side, has told the club website that he is honoured to lead his side.

"It really is an honour to become captain of this team that means so much to me. I dreamed of it happening at Liverpool and now it's happened to me here. Both teams mean so much to me and it feels so special to know I will be leading a team that has some brilliant players.

Brian came in earlier this week and told me straight away. We discussed my injury and while it is disappointing to miss out on some action, we've got some great leaders that can step up. We've got a brilliant vice-captain in Thomas Kahlenberg who is also injured for a while but we are very confident he can continue to do well as a leader at this club.

Thomas was happy for me to replace him as captain and he's still going to be playing a huge role at this club. There is a really positive feeling here and we're very excited for the start of the new season under Brian."

Laudrup's side are thrown straight back into the action on Thursday as they travel to Hungary for their Europa League qualifier against Ferencvárosi TC.
Login to Quote

Yanic
6 years
Very interesting team choice but very much one I like, it's different to the usual teams people play as so you've got a fan here. Great writing so far and I'll be reading for sure!

mgriffin2012
6 years
Very good start so far, and as Liverpool fan, Daniel Agger is a legend!
Login to Quote

Griffo
6 years
Good luck with this LFC
Login to Quote 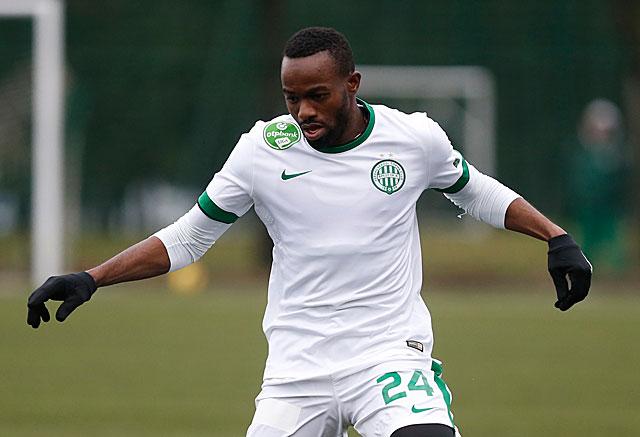 Former Swansea player Roland Lamah netted a brace but it wasn't enough to stop Brian Laudrup's Brøndby from securing a win in his first outing as manager.

Brian Laudrup's Brøndby travelled to Hungary to take on Thomas Doll's Ferencváros in the Europa League 1st Qualifying Round, just five days after the Danish legend was appointed manager.

Brøndby took the lead twice, only to be pegged back by five-time Belgium international Roland Lamah on both occasions. A strike from debutant Magnus Eriksson was enough to see Brøndby take a slender lead into the second leg which will be played in front of their fans back in Denmark.


Speaking before the game, Laudrup discussed his appointment and the club's ambitions for the upcoming season.

"It's wonderful to be back here at Brøndby with these amazing fans backing me. This is a fantastic opportunity and I really want to get the club back to the top of Danish football again. When we've achieved that, only then will we turn our attention to bigger things.

It's important to me that we focus on the league. That's not to say we're going to completely ignore these sorts of competitions, because they will be incredible experiences for myself and the team.

But for now, the priority is the league. When we come out on top in our own country and can consistently compete then I think we will be able to balance out our interests in these sorts of competitions."

Brøndby were without captain Daniel Agger and vice-captain Thomas Kahlenberg who are sidelined with a calf strain and hip injury respectively.


Italian referee Paolo Valeri took charge of this Europa League clash between two fairly well matched sides, with Brøndby kicking off in their yellow and blue strip and it didn't take long for Brian Laudrup's team to take the lead.

A Ferencváros attack broke down and the ball found its way out to the left flank where Danish winger Riza Durmisi was waiting. The 21-year-old beat his man just inside the Hungarian side's half before launching a long ball forward for Finnish striker Teemu Pukki to chase.

The former Celtic player tried to whip a cross in towards Ronnie Schwartz but a block from former West Bromwich Albion midfielder Zoltán Gera took the ball to Christian Nørgaard on the edge of the area.

The midfielder picked out a lovely first time ball to find the run of fullback Johann Larsson on the right flank, who cut into the area with the ball before squaring it brilliantly to Durmisi who scored a simple tap in from a couple of yards out to give his side the lead.

It didn't take long for Ferencváros to find themselves an equalizer, Brøndby failing to clear a free-kick delivered into the area by Levente Polgár. The ball found its way back to Polgár out wide and he delivered an inch-perfect cross for former Swansea man Roland Lamah, who was playing at a somewhat unfamiliar position of striker, with the Belgian normally operating on the left flank for his side.

Brøndby took the lead again before the half time break when Ronnie Schwartz, on loan from French side EA Guingamp, fired past Kalmár from close range. Brøndby were putting the pressure on Ferencváros and had forced a corner.

Larsson drilled it in but the Hungarian outfit managed to scramble it out of their penalty area as far as Jamaican midfielder Rodolph Austin who played a brilliant ball out to debutant Magnus Eriksson on the right flank. The Swedish winger put a good ball into Schwartz's feet but the striker was allowed too much time to control the ball, turn and fire off the shot which put the Danish side back in front.


Pukki was replaced by ex-Bolton Wanderers striker Johan Elmander at the half time break but it was Ferencváros that started the second half brighter, Lamah netting his second of the game just twenty one seconds after the interval. The Hungarian side kicked off and quickly found themselves deep inside Brøndby's half, the Danish side taking their foot off the pedal and looking complacent early on.

Máté put an average looking cross in from the left flank but it wasn't dealt with by the defence and Lamah ghosted in to snatch up the loose ball. Still the defenders failed to quell the threat and the Belgian fired in from a tight angle to bring his side level for the second time. 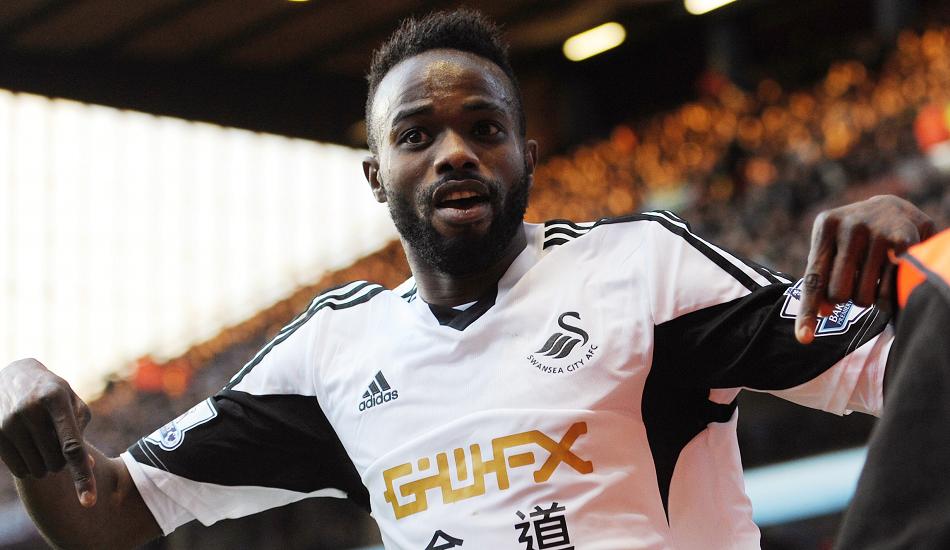 Threat: Former Swansea winger Lamah was in good form in front of goal and was named Man of the Match by pundits watching the tie.

Lamah came very close to giving his team the lead later on in the second half. More weak defending from Laudrup's side allowed substitute Ágoston to pick out Lamah with a cross, but the 27-year-old could only rattle the bar from close range.

It would prove to be a crucial miss for the Belgian as Brøndby sealed the win with a goal from Magnus Eriksson in the 79th minute. Brøndby had looked dangerous from crosses for most of the game and it was to be another cross that won them the game. Jesper Juelsgård was the man who put the ball in from the left flank for provider turned scorer Eriksson who stretched his leg out to meet the cross and bury the shot into the roof of the net.

Rodolph Austin's second yellow card put his side's position under question but Laudrup's side held out for a victory in his maiden outing and will host Ferencváros with a one goal advantage and three away goals.

Roland Lamah will be gutted that his brilliant performance wasn't enough to get his team a result but Brian Laudrup will no doubt be thrilled at a win in his first game in charge at Brøndby.

You are reading "Brøndby IF - Path to Glory".