MJK46
5 years
MGriffin2012 You will like the next club

Justice Thanks
Login to Quote 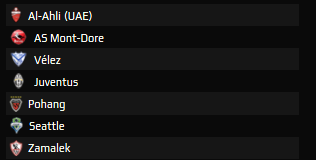 For the 2017 FIFA Club World Cup it was a very exciting time in the United Arab Emirates as the winners of the worlds champions leagues came together for the good of the game. There was a new team included to the competition. Seattle Sounders of MLS. They are the first club from the United States to represent CONCACAF in the tournament.

Once again last years darlings AS Mont-Dore made a big impact in the tournament. Unlike last season they made it all the way to the third placed playoffs this year. It was a really good run for the club as they finish in fourth place. Here are their results.Results

Finally UEFA Champions League winners Juventus made it look very easy this year with two shutout victories. 6-0 to AS Mont-Dore and 2-0 to Pohang. Here is the highlights of the championship match.

Justice
5 years
You did brilliantly to finish in 4th place in the CWC, well done!
1
Login to Quote

MJK46
5 years
Here is where we start the first intermission between clubs:


So it has been about two weeks since I left my job with AS Mont-Dore and let me tell you how happy I am. It was just getting too boring there and the routine was just getting too monotonous and I was ready for a new challenge. It was an amazing last two and a half seasons and I wish the club nothing but the best. Hopefully whoever takes over does not screw things up.

Well I have my sights set for Asia for my next job. You might wonder why I chose Asia. Well simply I felt it was the next logical step to the top. There are a few countries that I have been looking at openings for jobs and they are China, Japan, UAE and Macau. I had applied to a few UAE clubs back in the summer and got offers so this could be a good sign that I am ready.

While I was searching one day I notice a really cool club was searching for someone. The club is based out of Macau and they are called Sporting Club de Macau. Yes Sporting Macau is part of the Sporting Portugal family. I was like holy crap let me look these guys out. Well I saw that two seasons ago they were relegated into the second division. This was a red flag but then I had saw they just won the Taça AFM (Their League Cup) last season and that means the club will be in the AFC Cup, Asia’s secondary club tournament.

Well I put in my application and a day later I got a response from their Chairman Tam Si Keng. In it he said thank you for your interest with the club after reviewing your resume I feel that an interview would be in order. I replied with absolutely and now I am off to Macau for one of the biggest interviews in my life.

Holy crap if I get this job I will be a second division club in a continental cup haha. I hope the fact I do not speak Portuguese or Chinese will be a problem. Hell French is semi close to Portuguese……..right??
Login to Quote

ScottT
5 years
It would be an interesting career move for sure!
Login to Quote

MJK46
5 years
ScottT I am lookiing forward to it.

Jack Oh yes and it will suck
Login to Quote


Oh my god Macau is so damn beautiful I can’t believe this place exist. So I can’t believe I am here for a job interview, my second job at that. Well then I have been staying at the Venetian Macao for my stay and it is awesome. This place has a casino. Well anyways it is time to go to my interview. Boy am I nervous.

So as I arrive to where the interview is I meet with the Chairman Tam Si Keng. He seems like a really tough and intimidating person. When I was flying out I was doing research on him and the club. Apparently he is one of those Chinese millionaires type of people so this should be great. The one thing is that I have also found out he knows French so this could be a very easy interview.
The interview starts now:

“Hello Mr. Gauthier welcome to Macau and good luck with this interview”
“Nice to meet you sir, I am very honored to be here today”
“My biggest concern is that you do not speak Portuguese nor any of the Chinese dialects and that is what our club mostly speaks, how can I know you will be able to lead a club with such a massive language barrier?”
“Well Portuguese should be easy to pick up as it is very similar to French and with the Chinese I will be able to adapt and will be studying up during my free time.”
“I have looked over your resume and am impressed can you tell me about how you were able to bring AS Mont-Dore the status they became?”
“You probably don’t know but I have never played and the coaching and tactical side of things I was the most interested in. Also I was able to use my version to a 4-2-3-1 plus I was able to find players that I felt that could contribute, I would do the same here and I can promise success.”
“There are reports that you left due to your chairman, if I hire you I expect you to have a good working relationship with me. So what happened and how can I know you don’t do the same thing?”
“Honestly things were getting too easy last season and I wanted a challenge and wanted to move on, he wouldn’t let me move on. I am totally fine working with you and I feel that there are so many things I can do here that I won’t get bored.”
“Ok, so obviously you know we have not been promoted in two seasons, in order to get a contract extension at the end of the season if you get the job, I expect promotion, can you deliver?”
“Absolutely”
“For the other competitions I expect you to make the group stage of the AFC Cup, Win the Taça de Macau and not get blown out by Benfica in the Taça do Presidente!!”
“I will do those I look forward to these matches and I will not disappoint.”
“With the Taça do Presidente the match is set for the 28th of this month meaning you will need to get the club ready within a few days, is that a problem?”
“I mean yes but I think I can get the squad as ready as they can.”
“I noticed that you were being paid €44k a year, if you take this job you will have a significant pay cut at €4,300 for the contract, this is non-negotiable during the first year.”
(WTF this is a huge pay cut….there are so many positives so why not) “Yeah that is crazy low from what I was making, luckily I saved a lot so this pay cut is a bit disappointing but I accept.”
“Sounds good let me go over everything and then I will contact you in a few hours”
“No problem, it was nice meeting you and thanks for the opportunity.”

So the interview is done and now it is time to play the waiting game. I feel I did really well but at the same time I am not sure. Was it a mistake leaving AS Mont-Dore? Overall I feel like this might be my most pressured filled job. The chairman has a lot of demands and I think might be able to deliver on them. If not then I will be unemployed again. The pay really sucks though.
Login to Quote

Griffo
5 years
Ah money is money... adventure is of much greater value!
1
Login to Quote

C.J.Lippo
5 years
Tam Si Keng seems like he is going to be a difficult customer to deal with & that pay cut! Ouch! Good luck mate.

mgriffin2012
5 years
Fantastic finish at the CWC mate! Good luck in Macau, is going to be very interesting indeed!
Login to Quote

The 36 year old native of Le Havre, France joins the club after spending the last two and a half seasons with New Caledonian side AS Mont-Dore. During this time he won a total of six trophies including two OFC Champions Leagues (2016, 2017) three New Caledonia Super Ligue titles (2015, 2016, 2017) and one New Caledonia Cup in 2017.

Gauthier was quoted in saying: “I am very excited to become the next manager for this club and my main goal is to bring this club back to the top league.” Later on he said, “This job might seem like I took a step down but it wasn’t and I saw it as an exciting challenge and a new adventure for myself.”


The biggest concern that has been said about Gauthier is that he does not speak Chinese or Portuguese. It is known that he will be using a translator as well as taking several intensive language courses.

Chairman Tam Si Keng gave his opinion on his new hire,” I think Kevin is a magnificent capture for the club and I feel confident that he will be leading this club to glory once again, despite his lack of language I think he will adapt real fast. Just look at his resume of accomplishments.”

For Gauthier it will be a very quick turnaround for his job. Despite the job being open since the first of the new year he was not hired until a day ago and that is just four days ago before the super cup match against Benfica (MAC) on the 21st.
Login to Quote

C.J.Lippo
5 years
4 days to prepare for Benfica, good luck with that!