ScottT
6 years
Great start, unlucky as to the previous two results before that update!
1
Login to Quote

April was a pretty good month for this squad as it was very busy. We went through both the cup matches and league matches with no problems at all. I was able to see this club clicking to my system and the chemistry has improved big time since the start. Hell I am even picking up some of the two languages and that is helping.

Well we started out the month in the cup. in both rounds we played lights out and scored a total of two goals. The match I want to focus the most on is against Porto, yes Porto has a Macau side so when we found out we were playing them I was so pumped. Sadly despite the name and affiliation they suck as they are only in the fourth division. It was clear they were crap due to the 5-0 ass kicking and a hatrick by Gilberto Monteiro. Here is how the match went down. Match Report.

In league play we were on fire with the two matches outscoring the opponents 10-0. In front of 100 fans we embarrassed Leong Heng by a score of 7-0. This match showcased many players scoring goals. With the month of April I have gotten this club to first place and I hope to stay there. 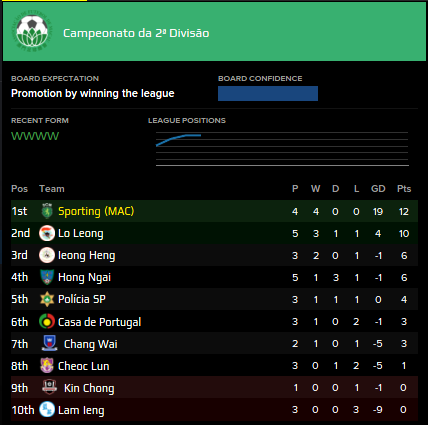 There are two players I would like to talk about for their contributions in the month. The first is Gilberto Monteiro. At 17 years old he has already shown how good of a player he is. In the four matches this month he scored a total of seven goals. I look forward to seeing what he does in May. The other player I want to discuss is goalkeeper Hugo Cardoso. The 31 year old played amazing this month with four cleansheets. So far this season he has six. Cardoso reminds me a lot of Alex Clement of AS Mont-Dore except only older. 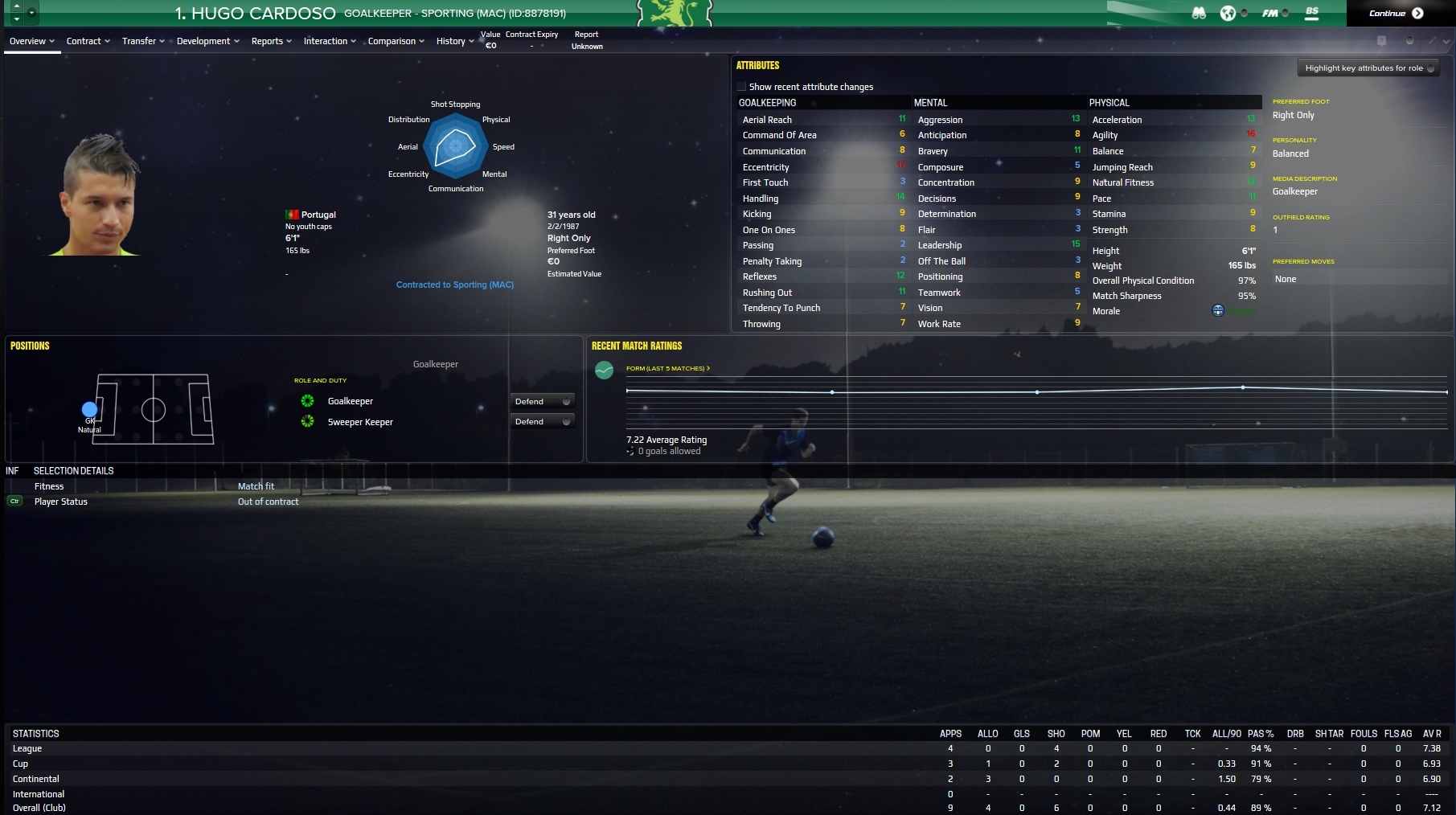 Next month will sort with a total of three matches. If we advance in the cup the schedule will be changed as there will be a second cup match in the month. I am hoping that his club can keep up the good work and that nothing bad happens.

Atoobie
6 years
I was right

An interview out of nowhere!!!

So today has been very interesting and I am preparing for our cup match against Hoi Tin and suddenly I get this phone call via skype. It was from the Western Sydney Wanderers of the Australian A-League. They said that I applied for the job but I honestly did not, anyways I decided to give this a go.

"Mr. Gauthier my name is Paul Lederer Chairman of the Western Sydney Wanders and I would like to interview you for the open manager job."
(hmmmm... I am thinking really?? I just got this job in Macau) "Well ok I guess, honestly I am not sure about this but that would be fine."
"I understand you have been with your current club for the past few months but we are really wanting someone and you are the person, what you did in New Caledonia was impressive and I want you here."
"Well the thing is I am really enjoying this job right now as things are starting to take off and I don't want to leave Macau as I just started, I am so sorry"
"Look I understand that but you would be managing in Sydney and our club is really good, you are the guy I want and am willing to do whatever to get you."
"Look I see what you are saying but I just started here and want to grow this club"
Please Kévin we need you to bring this club back on top."
"Once again I am sorry but I just can't, Good bye" (ends skype conversation)

I will be very fucking honest here, turning down this was really tough. Yes I might be a dumbass for not taking a possible chance on a way higher profile squad but I made a promise. I want to get this club to the top and do amazing things. Plus I want the Sporting Board in Portugal to see how amazing of a manager I am and that someday they will hire me. Now it is time to get the final preparations before the match in four days.
Login to Quote

It was a fairly short month for us with only three matches. For May we focused on cup play in both the fourth and fifth rounds. That fourth round match against Hoi Tin made my skin craw. The reason is because it took us all the way to the second half of extra time to win. I told the guys they need to play better than how they played. Well in league play there was only one match a 3-0 victory over Hong Ngai. 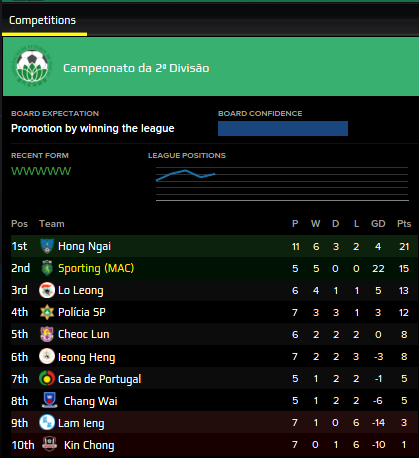 June will be a catch up month for the squad.Due to the cup and ground sharing our schedule has been moved around a lot. Now I am not happy about that but that is what happens when you ground share with several clubs. Four out of the five matches have us as the home team and when we play Policia they are listed as the home squad. Cup play will be interesting as we have Wang Cheng in the quarters.

ScottT
6 years
Great start and turning down a move to Australia, Jesus..
Login to Quote

Jack
6 years
I'd just go to Australia for a bit of a tan tbh, silly decision from you

It was a pretty good June as I was able to get this club closer to promotion as we are finally on top of the table. The most disappointing part to the month was against Lam Ling when we drew them 1-1. That was very upsetting. Now for something really cool, our cup match against Wan Cheng was a memorable one for me. This match was my 100th career match since I started managing back in 2015. It was a very special day as we would win 6-1. 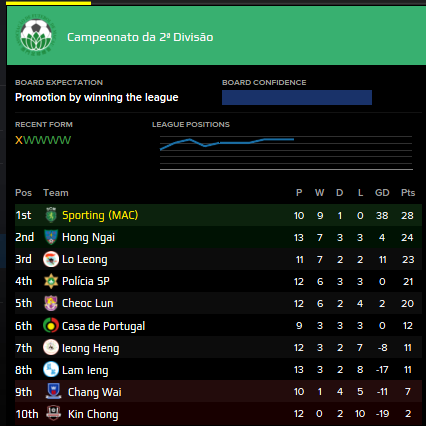 Next month will be fairly long with seven matches. I really hope we can keep up the current form and not falter as we are now in the final two months of league play. The match against Lai Chi will be massive as it is the semi final. Also next month the transfer window closes. I am fine with not buying anyone and the big thing is I am looking to get rid of a ton of players as it feels like the roster is way too full. We have 50 on the club and I just think that is way too many.

Repeat after me..... My name is Kévin Gauthier and I am a dumbass. Two months ago i had a chance to get a coaching gig in Australia and I did not take it..... You want to know why? Well because I want to be loyal to this club and make them the best. Well that is what my thinking was at the time and oh my that was stupid. Seriously if a damn good job offer comes at me take it....... I need to stop with this loyalty crap especially this early in my career. I have been thinking once it hits the new decade in a year and a half I am back in Europe. Well if I do get a better job offer by then I will move on.

Other than that stupid decision I am pleased that I have earned the boards trust with such a successful season. Other than getting this club on the brink of promotion and we are back in the final of the Taça de Macau. This time I am looking to get this club to win their first Taça de Macau .I was given a two year contract extension that ends on 30 September 2020. I am very pleased to have signed this extension but if someone comes along I am leaving.

Well that is about it for now I need to get ready to enjoy my birthday.
Login to Quote

mgriffin2012
6 years
Happy Birthday Kevin and best of luck in the cup final!
Login to Quote