mgriffin2012
6 years
Unlucky mate, not the best start to your time in Finalnd but i am sure it will pick up!
Login to Quote


It sucks to have lost my first match against my rival but after winning my first three I had a feeling one was coming. Also thanks for being comment 300
Login to Quote

Today is the official opening day of the 2020 Winter transfer window for clubs here in Finland. This period will take place between today and 06 May. Here are the new members of HJK Helsinki and the players who will be leaving us. The 19 year old joins us after the last season with VPS. Will most likely be starting with Klubi-04. He is a player to look forward to seeing with the first team in the futre. Chininha is an amazing Brazilian who previously played for Gauthier in Macau. During his time with Sporting he appeared in 14 matches and has won four cups. Chinnha has a chance to become one of the best defensive players in the club.

This 28 year old goalkeeper will be looking to compete for the starting job for the season. He joins us after making over 150 appearances for various clubs trough out France. One of his strengths is that he has had experience and that should help with the younger goalkeepers.

After spending the last seven seasons with SJK the 28 year old Laaksonen has joined us for a two year contract. During his time with SJK he made 179 appearances for the club and will be competing for a starting spot here. Despite making only 7 appearances with the club since joining back in 2017 he was seen as a surplus to requirements and has moved on. Griffo
6 years
Certainly looking to have the squad the way you want it, is there any restrictions you face in this league?
Login to Quote

Not really just no more than 3 non EU guys for the match squad.

Here are all the nations/ regions treated as non EU

HJK return to the Liigacup Final 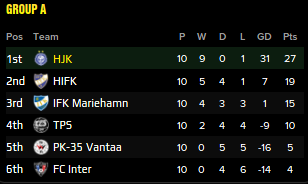 After finishing up Liigacup Group A with a big 5-0 victory over rival HIFK Gauthier's side are now through to the final once again. This is Gauthier's first chance at a title for the club and a chance at the clubs seventh in history.

The past ten matches have been really good as Klubi got a chance to shine in the Gauthier Tactical System and plenty of players got their names on the score sheet. There were a total of 37 goals scored in this short amount of time. That really shows how good the managers tactical system is with the current squad.

Match of the Group Stage:

The final match against Rival HIFK was the best match so far by consensus of the fans and staff. After the first meeting early in the group stage Klubi lost 1-0 and the club was looking for revenge. For manager Kévin Gauthier it was a very embarrassing and stupid loss in his words. Despite already locking up the chance to go onto the final this match was important still as it was the second Stadin Derby of the season. Ilmari Ylönen and Mikko Kuningas scored two goals each and Julien Benhaim scored the other. Julien lead the Liigacup with a total of nine goals and a match rating of 8.50. His best match came against FC inter scoring two goals.

The final will be taking place on 20 March at our home stadium. This clash looks to be very competitive as SJK had a good run in Group B. In the ten matches they finished with 19 points and had a goal difference of 10. For newcomer Johannes Laaksonen this match will be very special as he previously played for them.

From now until the final HJK will be taking the field for a series of friendlies to stay fresh and get ready for the season. The first friendly is set for a Leap Day kickoff against Swedish Giants Malmo FF.
Login to Quote

mgriffin2012
6 years
Good luck in the final mate! Glory is there for the taking!
Login to Quote

Griffo
6 years
Well if anyone asked me prior to reading this update whether I knew the details of Julien Benhaim's face.. I would say no... but now.... hahaha
Login to Quote

MJK46
6 years
mgriffin2012 Thanks, I hope we win as SJK are pretty good

Griffo You learn something new everyday haha
Login to Quote

Pre Match Thoughts:
I really think we will take this match and control it from the start. Don't get me wrong I am not saying we will destroy them or anything but the past few weeks this team has been on fire. I have been playing around with the tactic a bit and found something that could get this club even more goals. The biggest threat is the SJK counter attack, I was watching tons of film and they are really good with doing that. We will start out with a 4-2-4 and change it to a 4-2-3-1 if needed. Anyways here we go and I hope by the end of the match I get my eleventh trophy. One last thing I feel bad for Johannes Laaksonen as he will be missing the match against his old club due to the flu. 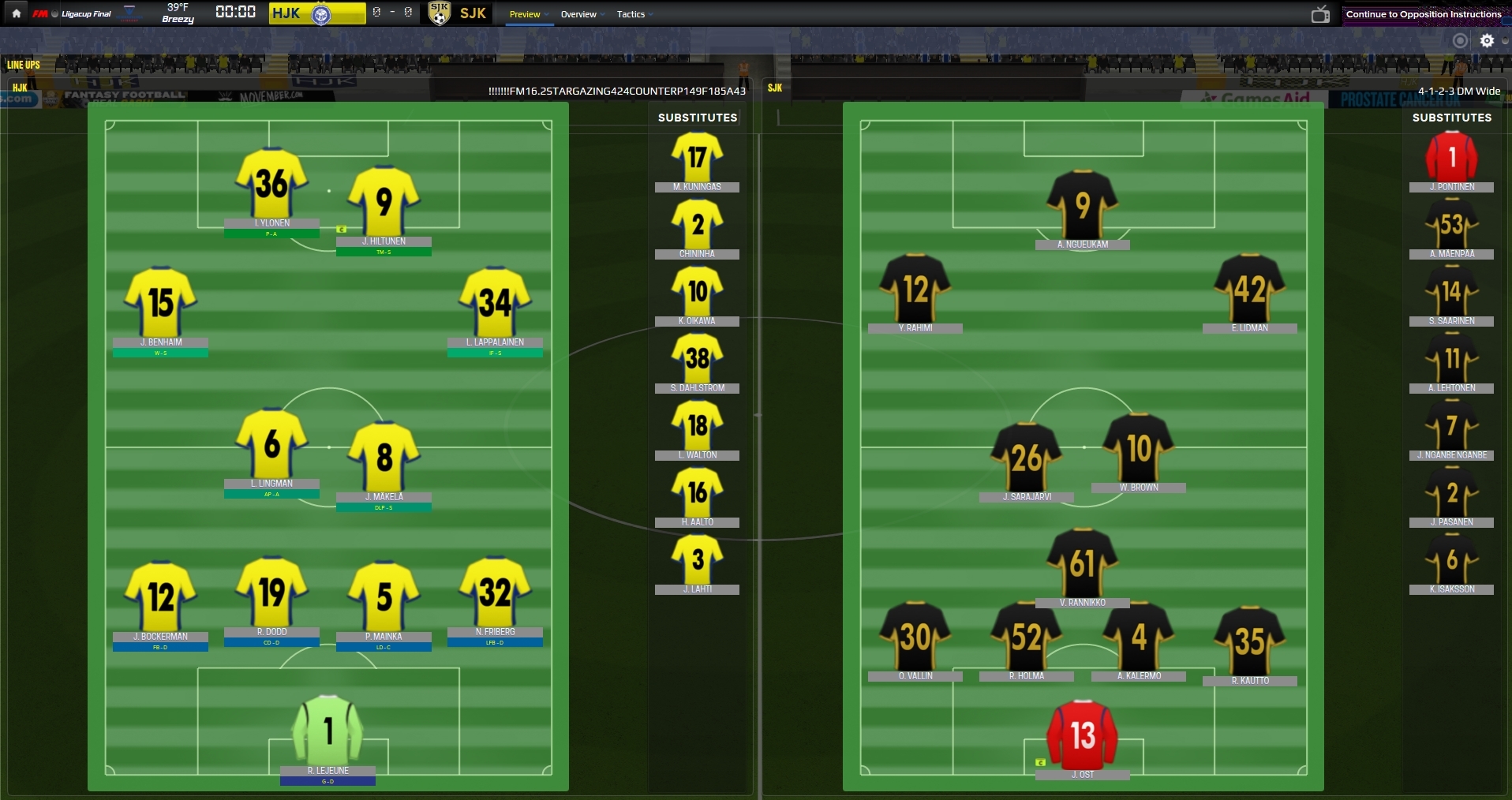 Ariel Ngueukam SJK scores the first goal of the match

42' HJK look to be in a more attacking mentality

HJKs Niklas Friberg is given a yellow for a trip. SJK now have a free kick from midfield.

Juho Hiltunen scores for HJK leveling the score to 2-2

Ariel Ngueukam SJK scores his seconf goal of the match, SJK is now up 3-2

Well that was really disappointing. I knew it would be close but I wow this loss really stings. We worked so hard and I am proud of this group especially coming back with two goals. Now it is time to focus on the remaining friendlies, Suomen Cup and the league. The biggest factor to our loss was all the cards and that really effected the way they played. Balik
6 years
Shame about the lost! Good luck next year if you make it (and still there) and damn 4 yellows in one game...they need to be taught a lesson on how not to dive into tackles

Justice
6 years
Unlucky to lose in that fashion. Coming back from two goals down in a cup final is a superb feat, but then to concede defeat is a harsh blow to take... Hopefully you can rally your team together to perform stronger throughout the season!
Login to Quote

MJK46
6 years
Balik The lack of discipline really upset me

Justice I really hope so too, it was a hard loss especially after winning a friendly 10-0 a week before. I think we will bounce back though
Login to Quote