Friendly Recap and Other News

The 2020 Preseason was one that was quite short for the club as there were only five matches. Due to the Liigacup final the team during the preseason was made up of Klubi-04 and Academy players. During this time the players were able to grasp Gauthier's tactic and seem to have a really good understanding of how it works.

For manager Kévin Gauthier his first preseason here in Finland was something he had never experienced before and had a thought on it. "It was a little weird having preseason matches after the cup and honestly I am still not used to it, maybe next season it will become normal for me."

One of the crazier aspects of this preseason was the amount of goals scored during the five matches. In total the squad scored twenty five goals while only letting in two. The most notable match in the preseason came from the 10-0 win over Warkaus JK. Three players Juho Hiltunen, Julien Benhaim and Ilmari Ylonen all had hat tricks.

In other club news new signing Reece Dodd recieved his first cap with the Australian National Team. He made his debut against Jordan and played really well. After returning to Helsinki he had this tto say, "It was such an honour to get my first cap with the national team and I am excited to be called up even more, being part of my countries national team is such a blessing." Since joining the club back in February he has made an instant impact on the squad and is becoming a fan favorite.

Griffo
6 years
Great pre-season and best of luck heading into the new season!
Login to Quote

Balik
6 years
Great pre-season, let's hope your player can win while on a high!
Login to Quote

MJK46
6 years
Everyone: Thanks, I am ready to get the season kicked off
Login to Quote

Live For FM
6 years
Fantastic pre-season mate, hopefuuly you can win the Finnish Vekkusliga...... sorry for the spelling
Login to Quote


http://static.pulse.com.gh/img/frontpage/origs4600048/1140485720-w980-h640/Michael-Essien-scored-his-debut-goal-for-Panathinaikos.jpg
Essien during his time with Greek club Panathinaikos

The Ghanaian midfielder, 37, has signed a one-year deal with the Finnish club after passing a medical on Wednesday. Essien is the latest capture for HJK, who just hired one of the hottest names in the coaching world at the moment.

The transfer from Serbian side FK Radni?ki Niš was reported to be around the €150K price tag. During his time in Serbia between the 2019-20 season he had made a total of 26 appearances with five assist. Before joining FK Radni?ki Niš on a free he had played for Spanish club UD Almería from 2017-2019.

Despite his age Essien can still play at a high level and will be a major boost for this HJK squad who are looking to win their 31st title this season. He will be one of the feature players for manager Kévin Gauthier. 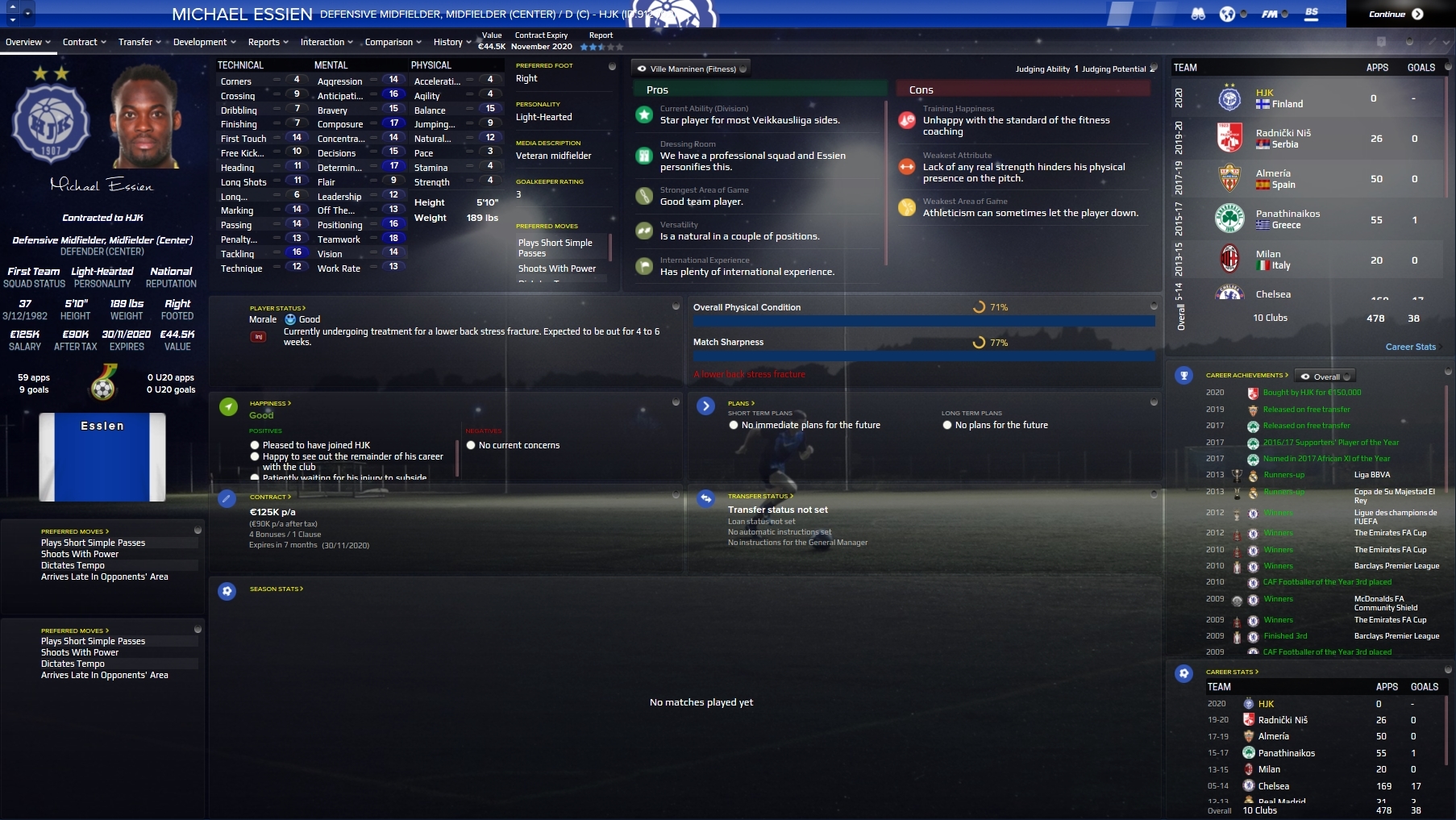 "It's an honour to welcome Michael Essien to Klubi," said HJK chairman Olli-Pekka Lyytikäinen in a club statement. "From the first conversation I had with him, I felt that he really wanted to play in Helsinki especially for a manager like Kévin (Gauthier). This is one of the biggest days in club history and his arrival to the club will be beneficial in every aspect."

Michael will now fill the one of the two areas that HJK were needing the most help in, and the veteran Ghanaian still has the ability to play multiple positions at such an older age. The biggest aspect of him joining the club is the influence he will have over the younger players.

During a statement for the club Essien was quoted in saying, "HJK is a perfect club to play for this late in my career, "who doesn't want to be here? Kévin (Gauthier) is one of the most exciting managers to play for. Finally Helsinki is a great place to wind down my career. It's a great way to finish such an amazing career."

Director of Football Tuomo Saarnio insists Essien will be HJK's final signing of the winter transfer window but said if someone else comes along they may pursue them. The Finnish transfer window closes in May.
Login to Quote

mgriffin2012
6 years
His experience could be vital for you mate! Success is coming to HJK i can feel it!
Login to Quote

Balik
6 years
Experience is always good to have in the squad, just have the EMS on stand-bye when ever he plays!
Login to Quote

Justice He will dominate in my system

Balik Don't worry they are on speed dial
Login to Quote Champions HJK impressively began their quest for a second straight title triumph with a wholly deserved and highly convincing 4-0 thrashing of outclassed FC Lahti in Saturday evening’s opening match of the 2020 Veikkausliiga season.

The 4,000 capacity crowd at the Lahden stadion saw Kévin Gauthier’s men patiently pick away at their deep-lying opponents and take a 6th-minute lead through Ilmari Ylönen. Juho Hiltunen doubled the lead two minutes before the half, after Lucas Lingman continued the thrashing with a beautiful goal in the 58th-minute. Ylönen finished the blowout with his second goal of the match during the 86th-minute.

It was a match of debuts for Klubi as no less than five players made their Veikkausliiga debuts. Some of the most notable players that debuted include Johannes Laakson, Chininha and Reece Dodd. For each of them it was a special day getting a chance to play for the best club in Finland. It was also a notable day for manager Kévin Gauthier who won in his Veikkausliiga debut.

Klubi will be looking to build on their winning start to the new domestic campaign, are back in action on Sunday 19 April with their first league home match against IFK Mariehamn for Veikkausliiga Matchday 2. 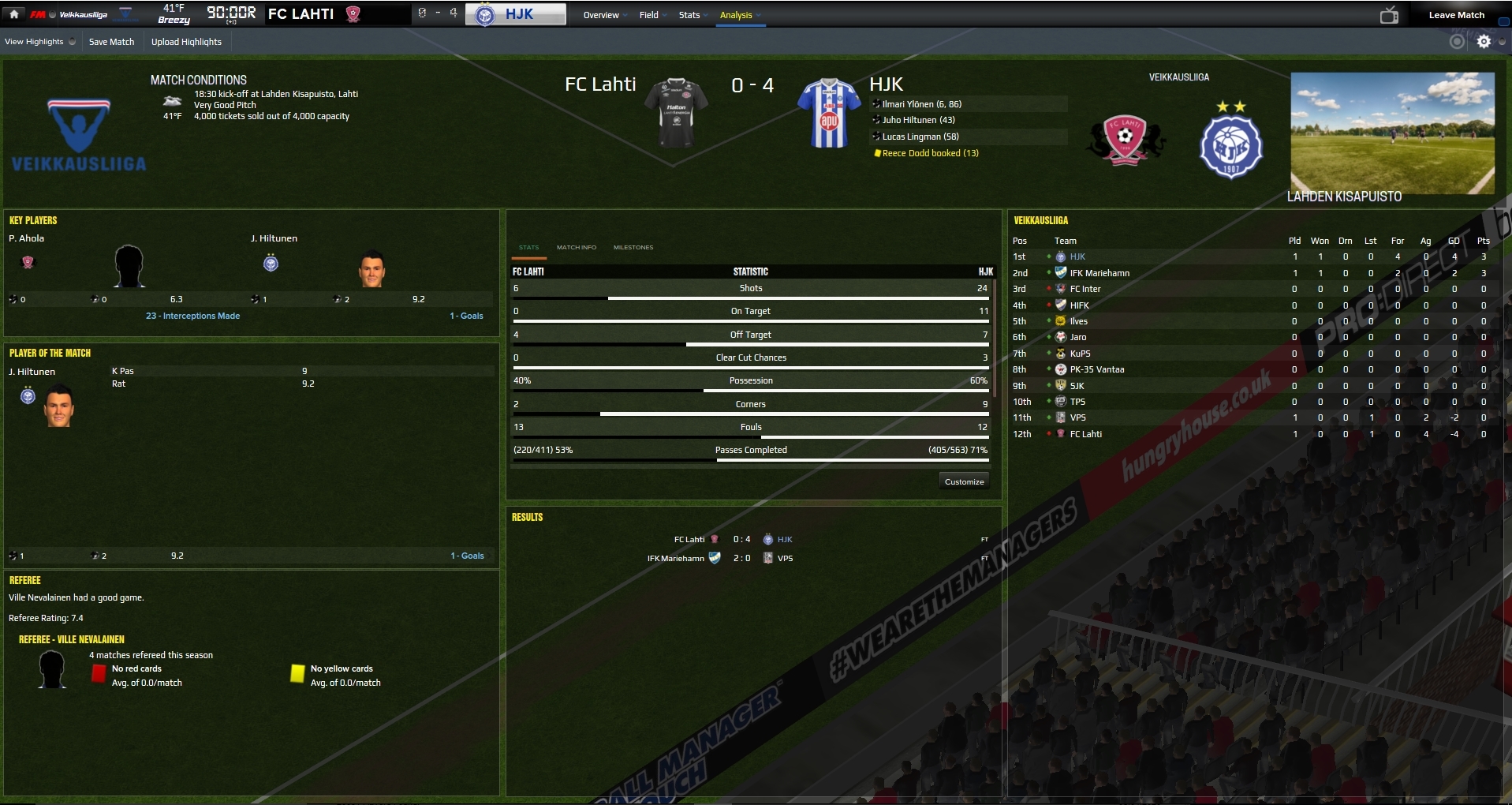 mgriffin2012
6 years
Great start to the season that's going to put you in good shape for the rest of the season!
Login to Quote

Griffo
6 years
Quality win, I am expecting big things during your time at this club!
Login to Quote