The first month of Veikkausliiga under Kévin Gauthier was a very exciting and entertaining month for the club. Klubi were able to showcase several new players in league play who were able to make an immediate impact. Watching the players flourish in Gauthier's system was the most pleasing as players who would have not had a chance under the old regime got one.

In Veikkausliiga play Klubi would finish the month in first, by winning win three out of the four matches by a margin of ten goals scored to none conceded. The most impressive victories came against FC Lahti and FC Inter with both matches posting a 4-0 scoreline. The other match of note against Kuopion Palloseura was a strange game due to a draw where nobody from Klubi scored. KuPS scored an own goal giving us the 1-1 draw. 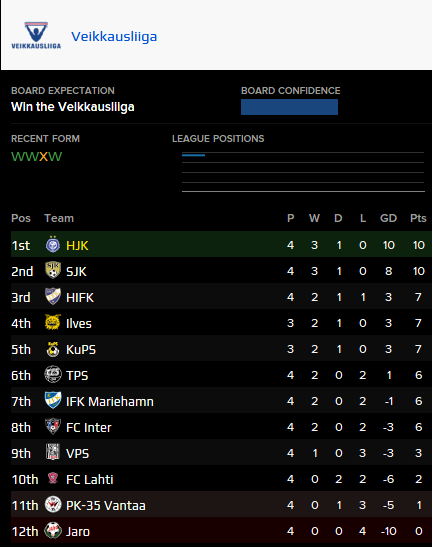 Despite the fact reserve side Klubi-04 has been in the Suomen Cup for the last several rounds it was the main squads time to shine. On 17 April they were drawn against fellow Veikkausliiga side PK-35 Vantaa for a meeting a few days later on the 21st. PK-35 would be severely out classed as HJK would score four goals in the match. With that win the club now advances to the Quarter final.

Superstar striker Juho Hiltunen was the most impressive player for the first month of play. In all matches he scored a total of five goals in all competitions. His biggest day came against DC Inter when he lead the match in scoring with a hat trick. Also he collected two assist and maintained a 8.32 rating.

Managers Thoughts:
The first month of league play was really good in my opinion. We were really on fire most of the time and it looked like the players were connecting without really having to be vocal. It was weird like they could read each others minds while crossing and passing the ball. I hope we can keep up the good run as SJK are too close to us in the table.

What to look forward to in May:
Klubi will have a very busy month of May with a total of eight matches on the docket. Due to the heavy volume of the month we will see a lot of rotating and mixing up of the squads. This month includes a date with rival HIFK and a meeting against SJK. Klubi are looking to avenge the 3-2 loss from the Veikkausliiga Liigacup final earlier this season. On injury news Michael Essien should be healthy and make his debut either against HIFK or PK-35. The transfer window closes on 7 May.

Live For FM
6 years
Big Match against HIFK next.... my prediction is 3-1 in your favour

mgriffin2012
6 years
Big game against HIFK to come and a huge month for you as you chase down that title!
Login to Quote

Balik Derby days are the best

Justice
6 years
A very solid month indeed. Can't complain too much about progression in the cup and topping the league table.
Login to Quote

2020 Winter Transfer Window round up

It was a very busy first window for Kévin Gauthier who was looking to bring in many new faces for the season. In total we have spent €1.54M on incoming transfers and made a profit on €67K off of outgoing transfers

mgriffin2012
6 years
Some good signings there mate that could be a major boost to your title hopes!
Login to Quote

Griffo
6 years
A hell of a lot of movement in that squad of yours!
Login to Quote

MJK46
6 years
Everyone Thanks, it was a good window and every player has done well so far
Login to Quote

The month of May was the busiest month so far here in 2020. First off the club completed all the transfers as the window shut earlier in the month. This HJK squad looks to become one of the strongest in years. Outside of that the club continued with league and Suomi Cup play. At the end of the month Klubi is in first place by a two point lead on SJK.

In league play it was a good month as the club continued the drive to title 31. Winning five out of the six league matches really helped with the team coming together. It was a great month for Michael Essien as well. He made his debut against TPS where he played the whole match. On the match against TPS he scored his first goal against VPS.

The only negative of the month came from the hands of third place Ilves. This match was right before the Suomi Cup date with Seinäjoen Jalkapallokerho and Gauthier was looking to rest the starters for it. With mostly back up and Klubi-04 players we lost a close one by a score of 2-1.It came as a shock to see Klubi lose in a close match. "It was my fault in the loss and I accept full responsibility, I was looking to rest many of the players for the cup match and that plan backfired," said Gauthier following the loss. 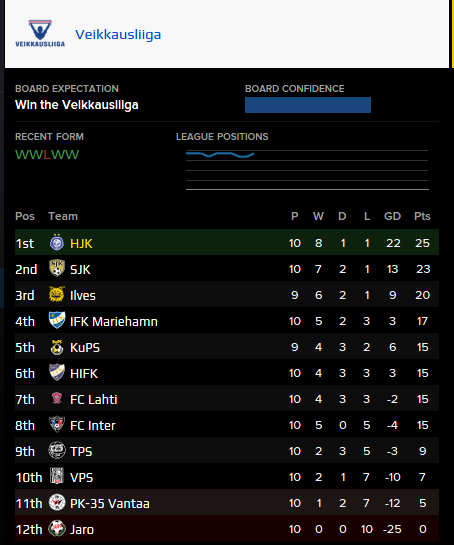 On 18 May Klubi meet SJK in the quarter final round of the Suomi Cup, looking to avenge the loss of the Veikkausliiga Liigacup Gauthier's men were prepared. After the majority of the players being rested in the previous match they seemed more energetic and were on fire. It was a pretty uneventful match with a scoreline of 2-0 with goals form Lingman and Hiltunen.

With that victory Klubi now move onto the semi final and have been drawn against, IFK Mariehamn. The match is set for a 16 August kickoff at the Wiklöf Holding Arena in Mariehamn.

Romain Lejeune had a really good month in goal. During the matches he played he would get four shutouts. His play is one of the reasons Klubi are on top and gaining momentum in the league. With a 7.8 match rating Lejeune has been very consistent all season.

Managers Thoughts:
I would like to take this oppertunity to talk about the FC Ilves match. I was really stupid on my part overhauling the squad as I did. The main reason why I chose to start backups and reserves was because I was looking to the next match against SJK, I should have gone about it differently and will next time, this match almost cost us our first place lead into June.

What to look forward to in June:
Next month Klubi will be solely focusing on the league with seven matches. It is also a month that the club will be preparing for the 2020/21 UEFA Champions League. The key matchup is in two days against SJK. This match will be one that sees who gains control of the league. In recent seasons the two clubs seem to be building a rivalry and this match will be big for both sides.

walkinshaw
6 years
Some nice signings mate and one of em already doing so well to win player of the month. Good to see a decent looking young aussie and hopefully he develops well for you 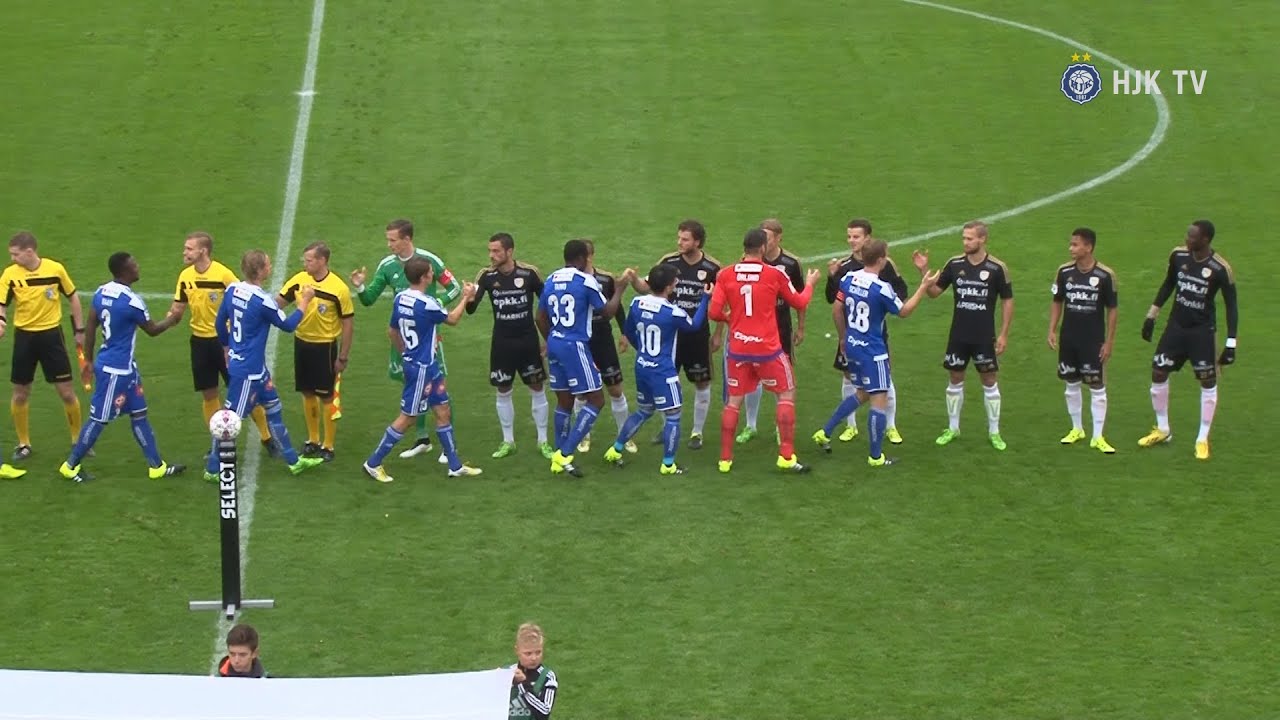 In what is quickly becoming one of the most intense pairings in the last few years the first Veikkausliiga lived up to he pregame hype as the two sides meet for the third time this season. With this victory Klubi are now five points ahead of the table giving them some breathing room as the season continues.

The 2,208 crowd at the Seinäjoen keskuskenttä saw Kévin Gauthier’s men set off at a furious pace and pin SJK back into their own third of the field, but the home side survived most of the onslaught and preserve the stalemate until a minute before the interval when Juho Hiltunen scored the first goal of the match. The champions upped the tempo after the break and SJK’s resistance finally crumbled when Ylönen scored the second and final goal of the match a few minutes into the second half, in the 48th minute. Klubi would continue the pressure by not allowing SJK to get a shot on target in the second half.

The result means HJK now have 28 points, once again 5 ahead of second-placed Seinäjoen Jalkapallokerho. With this 5 point lead Klubi look to increase it as they have two league fixtures in the coming week, the away clash with IFK Mariehamn on Sunday and a return home to face FC Lahti Thursday evening.