Ikone nets hat trick as Klubi sign off with a win 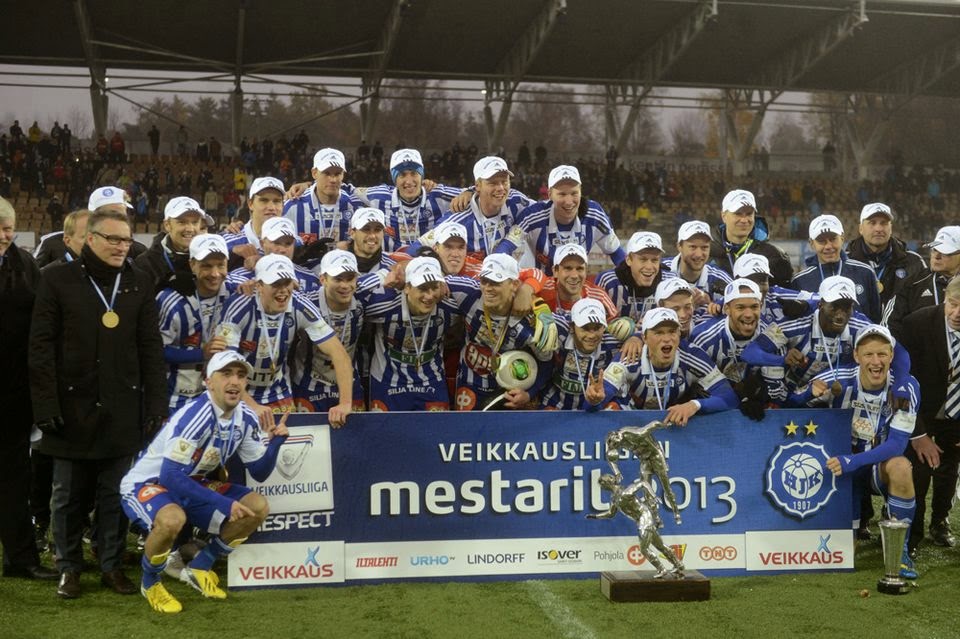 Champions HJK rounded off a hugely successful Veikkausliiga campaign in characteristic style with a lively 6-1 win over ninth place Vaasan Palloseura earlier today, the perfect ending for coach Kévin Gauthier in first season at the Sonera Stadium and a moment prior to Michael Essien hoisting his last trophy as a player. There was personal glory too for Juho Hiltunen, who finished as the league’s top scorer on a remarkable total of 24 for the season.

Klubi supporters saw their club take the lead through Jonathan Ikone after 8 minutes. Juho Hiltunen would score his final goal of the season in the 38th minute and Klubi took a 2-0 lead into the half. Around five minutes after the half HJK would score two in a row, Mikko Kuningas in the 49th minute and Johnathan Ikone scored his second of the match a minute later. In the 71st minute Ikone finished his stellar evening with his third goal. Finally defender Patrick Manika scored the final goal of 2020 in the 74th.

After the match Klubi were officially given their thirty-first league title since the clubs first year in 1907. For Kévin Gauthier this was his twelfth title won since starting his career a little over five years ago and we look forward to see what he does next season.

The result means the champions finish on 84 points from 33 matches, twenty three ahead of second-placed FC Ilves. Klubi have finished their first year under manager Kévin Gauthier and are looking forward to a little rest before preseason. 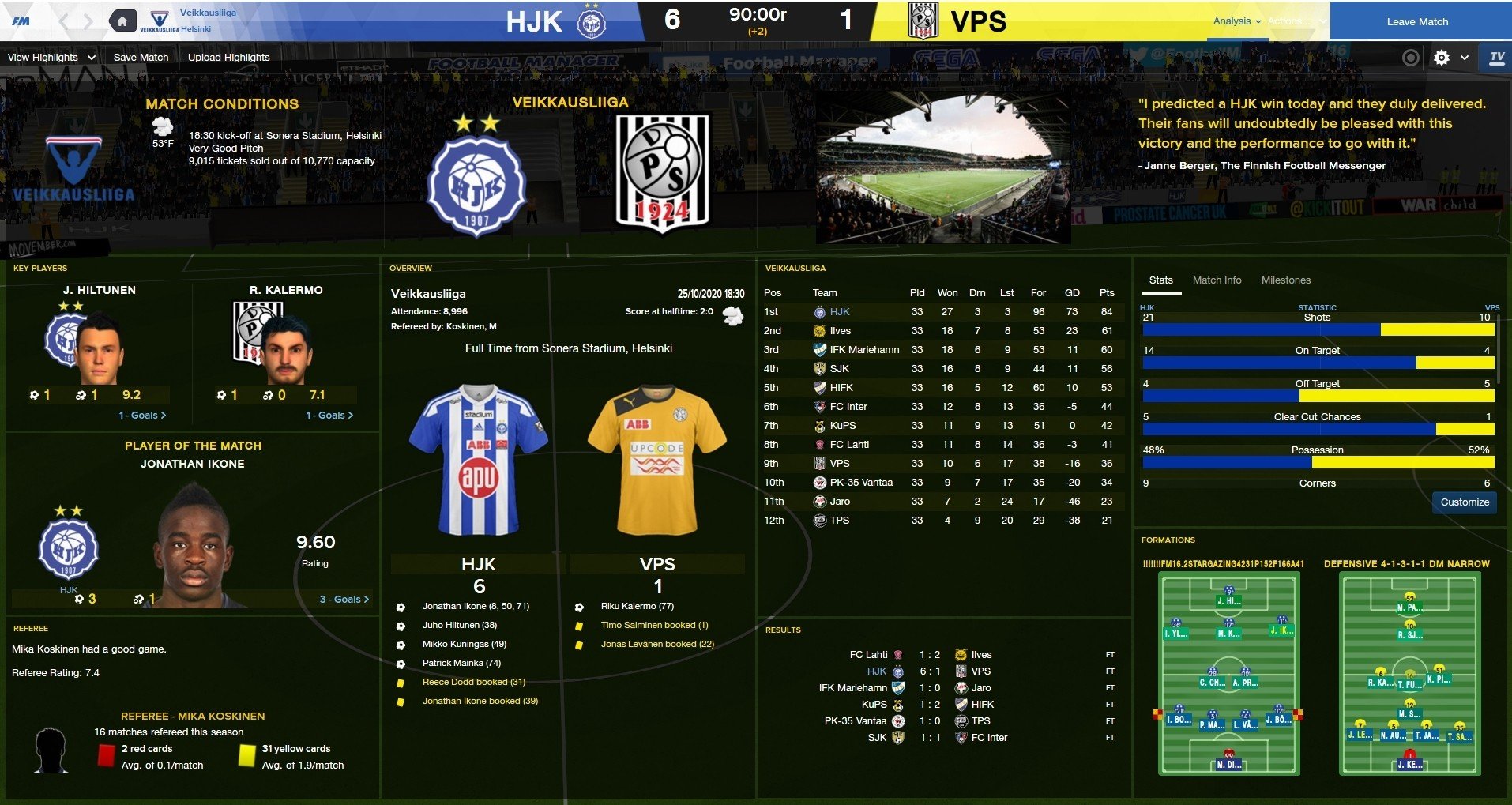 For the 31st time in club history the players are singing Oon Suomen Mestari (I am a Finnish Champion).

It was a brilliant end to the season Gauthier's boys as they finished the season with a draw against SJK and a final day thumping against VPS. Despite it being a so so month for Klubi I did not matter at all as the club was looking to finish the year off with no injuries. Once the season was over the players have now gone off to vacation and will be arriving back to training at a date still to be determined. For this final month we will present to you the 2020 Klubi Awards.

With 47% of your votes Mikko has been voted as the Fans player of the Year. It was a great season for the 23 year old who lead the league with assist with 15.

Signing of the Season: Jonathan Ikone 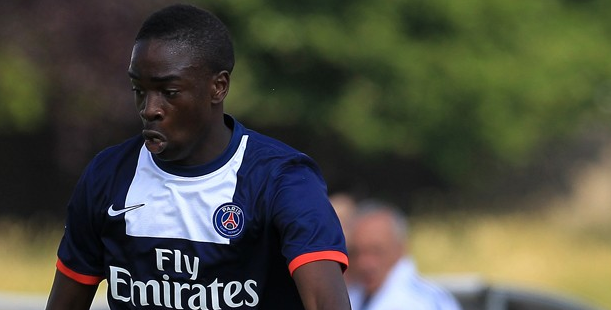 The former PSG Academy product was by far the best signing by Gauthier this season. Since joining Klubi he has fast become a fan favourite and one of the key player this year. Since joining back in the summer Ikone has made 15 appearances for the club with 12 goals, 15 assist and 6 Player of the Match awards,


Team of the Season: 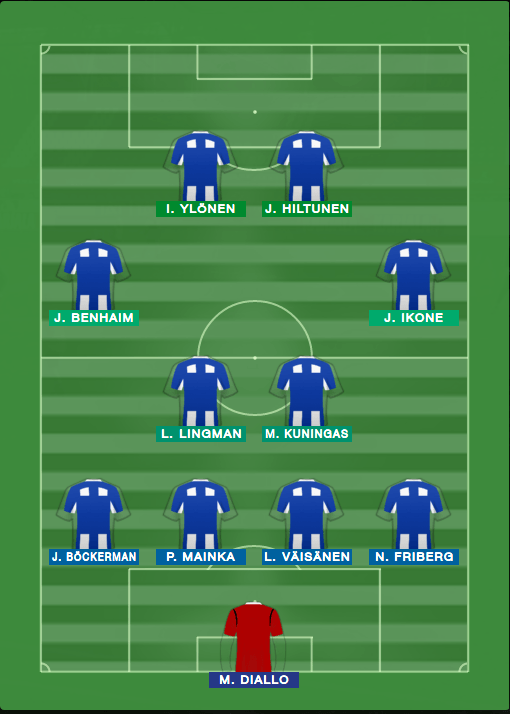 Managers Thoughts:
First off I want to thank every supporter of this club for such a great year following Klubi to our 31st championship. I also want to thank all supporters and those involved with this club thank you for welcoming me with open arms, this has been a special season and I really really with the bottom of my heart thank you all for being so warm and receptive towards me.

2021 will be just as good if not better. I am looking to get this club a domestic treble no matter what it takes, this past Liigacup's defeat of SJK hurts and we need that trophy back. I also want to put more importance on Europe and get us to the group stage. Last season we were so close and I feel that we can achieve that goal this time around. Also I am looking to bring in a few fresh faces that would be able to contribute quickly.

Once again I want to thank everyone of a great 2020 and I can't wait until the next season.

What to look forward to in 2021:
In Kévin Gauthier's second here with Klubi the club are looking to repeat the 202 season but this time with a treble. In Veikkausliiga play the goal is to once again defend the title and go for the third straight title. The 2021 season is set to kick off with the Liigacup sometime in January and league play begins in April.
Login to Quote

mgriffin2012
6 years
Fantastic 6-1 victory to round the season off mate!
Login to Quote

Justice
6 years
Ikone certainly proved to be a brilliant signing!
Login to Quote 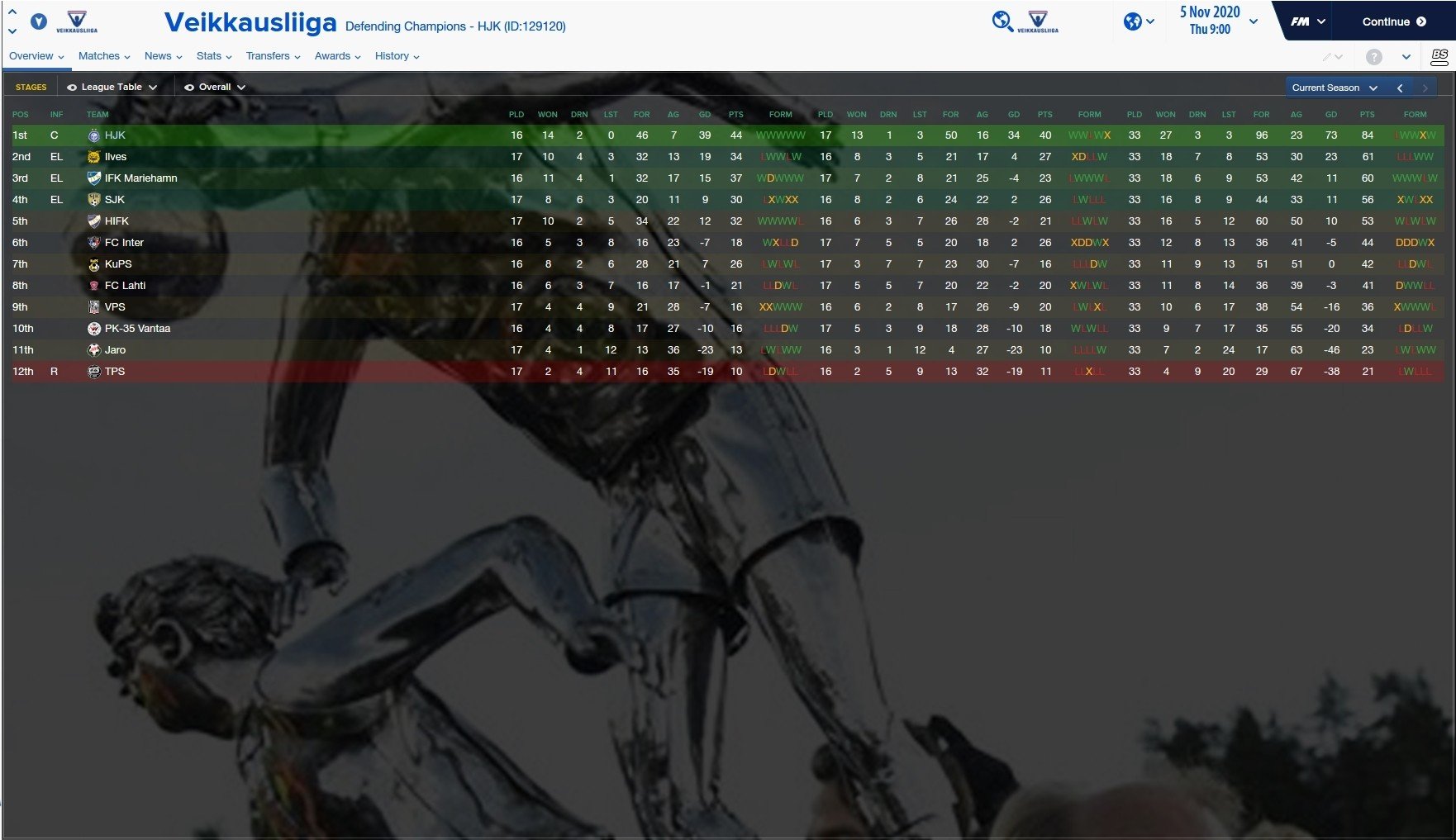 Veikkausliiga Defender of the Year

Veikkausliiga Midfielder of the Year

Veikkausliiga Attacker of the Year

Veikkausliiga Manager of the Year

Veikkausliiga Player of the Year

Veikkausliiga Rookie of the Year

Veikkausliiga Team of the Year 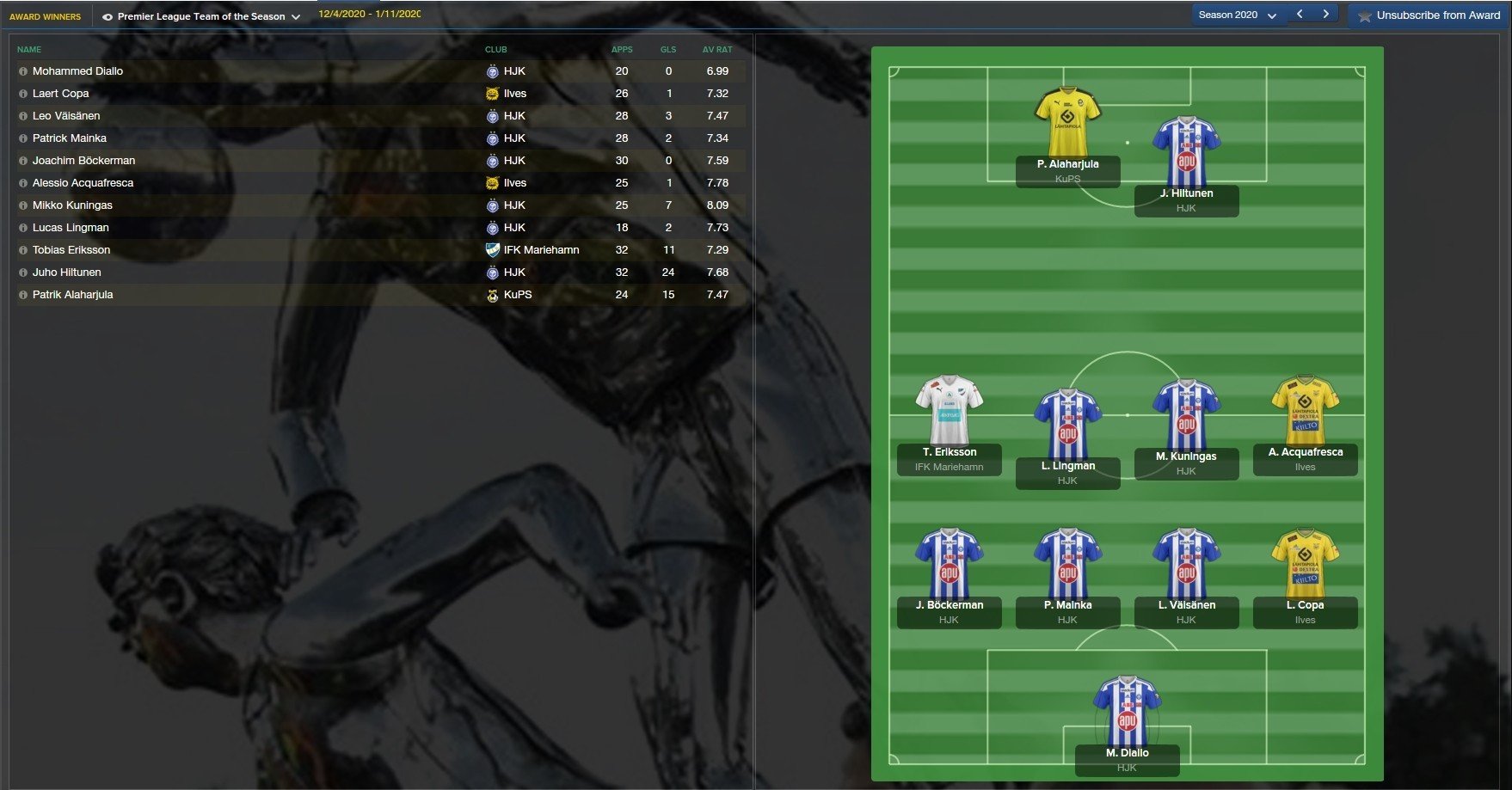 Griffo
6 years
It is time for a new challenge MJK!
Login to Quote

mgriffin2012
6 years
You're running riot in Finland mate! Hopefully you're becoming an icon/legend!
Login to Quote

Jack
6 years
Seems like a new challenge is in order! You're ruling the country over in Finland!
Login to Quote

MJK46
6 years
Everyone: I think you are all right it is time for a new challenge, I will see who is interested in me and go from there, but my focus is still HJK until some other opportunity comes around.
Login to Quote