Griffo
6 years
You gotta take that offer!
Login to Quote Klubi are the 2021 Veikkausliiga Liigacup winners! Gauthier's men completed their 7th Liigacup victory on Friday thanks to a 3-1 victory over Kuopion Palloseura. This a competition that Klubi has historically struggled in and have not won since 2019. For Kévin Gauthier this victory is his third trophy with Klubi.

On this cold winter's evening at the Sonera Stadium 1,268 people braved the bad weather and saw Klubi dominate. The match started out good for KuPS as Saku Enberg gave his club the lead 12 minutes into the match with a nice effort 13 yards out. A few minutes later in the 17th minute, Kuopion Palloseura's Hamed Coulibaly commited a huge error in an own goal. It was now a 1-1 draw thanks to an error.

From that point on most of the match went back and forth as both clubs braved the elements and struggled at times. Both had many amazing chances but failed to capitalize on any. With 15 minutes remaining in the match, Giorgi Murdashvili scored Klubi's second goal of the match giving the club a 2-1 lead. In the 90th he would strike again scoring his second and putting a nail in the coffin.

The victory, a record 7th cup triumph for Klubi from six appearances in the final, means the Kévin Gauthier is ready to achieve the clubs first domestic treble in club history. Yet another trophy for the 39 year old Frenchman his name will start making noise throughout Europe. HJK will continue preparing for the 2021 Veikkausliiga season as the three remaining friendlies are played. They will return to the Sonera Stadium on 11 April as they kickoff the season against Seinäjoen Jalkapallokerho. 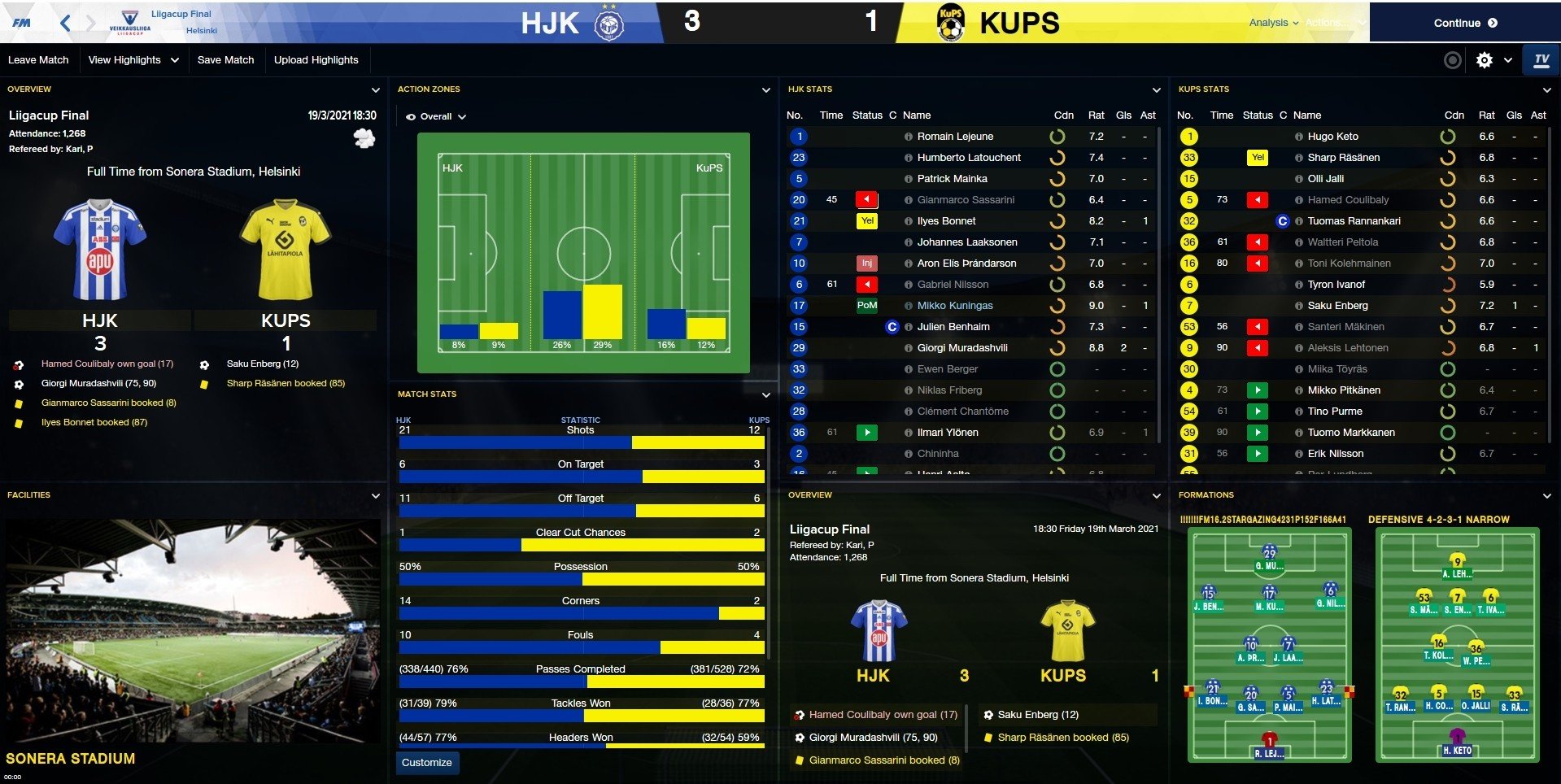 you got it going on hereeee
Login to Quote

mgriffin2012
6 years
Another winners medal in the collection mate, plenty more to come, potentially at a new club

Griffo
6 years
I don't think you win enough trophies TBH... you should be looking to up your game haha!
Login to Quote

Jack
6 years
Think you need to be adding an extension onto that trophy cupboard of yours!
Login to Quote

The Meeting About My Future

As you know I have been getting a few job offers lately and I still have not figured out if I want them or not, I am enjoying this job and since we have a shot at a treble I want to stay for that and other things but so many teams want me. Anyways I am in my office working and I get this call: "Hey Kévin can you come up to my office for a minute, I need to talk to you about something important." Well I have to go talk with the chairman about something.


I knock on his door

OPL: "Come on in Kévin and have a seat."

KG: "Is there anything you need?? I came up as fast as possible."

OPL: "Absolutely I know about your situation of the job opportunities and I wanted to talk about it, I see you are on the verge of talking the Birmingham City job, no offense to them or you but I feel they are way beneath you and that you could do better, we here at HJK have Champions League, they do not, so what can convince you to stay?"

KG: "I totally agree with that and will be rejecting it as soon as possible. To be honest there are a few clubs that might have an open spot soon back in France that could pull me away from here, and they could be the perfect opportunity for me."

OPL: Ah I see, that is good about the Birmingham City thing, if it is ok who are the two French clubs you are looking at??"

KG: " They are mostly in Ligue 1 and 2 so far I have Paris FC on the radar and have put in an application into Bordeaux. Caen has even had a call out to mw but to be honest not interest in managing a rival club as I am from Le Havre unless they offer me something good."

OPL: "Ohhhh they seem like good jobs for you, I don't want to lose you though, I would like to offer you a contract extension that will take you to 2023 is that good??"

KG: "Sure that would be ok but at the same time I don't want you to feel bad if I do leave. Why don't we have this whatever club I manage next that is "Bigger" than Klubi will become a parent club to us, i would make sure you all would get quality players on loan and stuff like that, but if I don't get an offer I like or a team I feel that would be good I am staying here and getting us far into Champions League and a treble."

OPL: "That sounds good and I do hope you get what you want and there will be no hard feelings if you leave as i have been enjoying what you have done, also the partnership idea is a great one, well you can go now if you want."

KG: "Sounds good, have a good rest of the day and call me if you need anything."

I felt this meeting was really good and I love how I got an extension out of it. I do want to stay but will only leave if someone big comes knocking.
Login to Quote

mgriffin2012
6 years
Interesting talks, still wondering if you're going to take this job!
Login to Quote

Griffo
6 years
Interesting relationship being built here, I would like to see how you help your old club once you move on
Login to Quote

C.J.Lippo
6 years
Caught at a cross roads it seems, very interested to see what happens!
Login to Quote