mgriffin2012
6 years
Great news signing a new contract man! Tough draw in the Champions League but you can do it!
Login to Quote

ScottT
6 years
Hopefully you can see them off and get through, it would be brilliant if you could win it.
Login to Quote

For our champions it was a time to get ready for the upcoming season to defend the title. It was a very short month with only three matches but they were important due to needing to get ready for the upcoming season. During this time we went 2-1-0. "I was very pleased with the way this preseason went and I feel that we are ready to defend the title," said Gauthier later on he went on about the OFC Champions League, "On Champions League I feel we have a good shot at advancing, just need to focus one match at a time." The season kicks off in 19 days as we go on to face SC Ne Drehu on the 19th.

6 August: First Round of the Coupe de Nouvelle-Calédonie

26 November: Final match of season against AS Magenta
Login to Quote

The first month of the season was one that went by real quick as there was only one match. The match was against SC Ne Drehu where we would dominate. During this match we scored six total goals. It was a great debut for new signee Kévin Gohiri as he scored two goals. We also saw Jean-Marc case score two as well. Below is a video of all six goals.

April will be a very busy month with both league and Champions League play. In total there will be eight matches. As Group C is here in New Caledonia tickets will be available starting next week. Below is the upcoming schedule.

Else where this month the OFC Champions League Group Stage registration occurred. Here are the 30 players who will be in the competition. 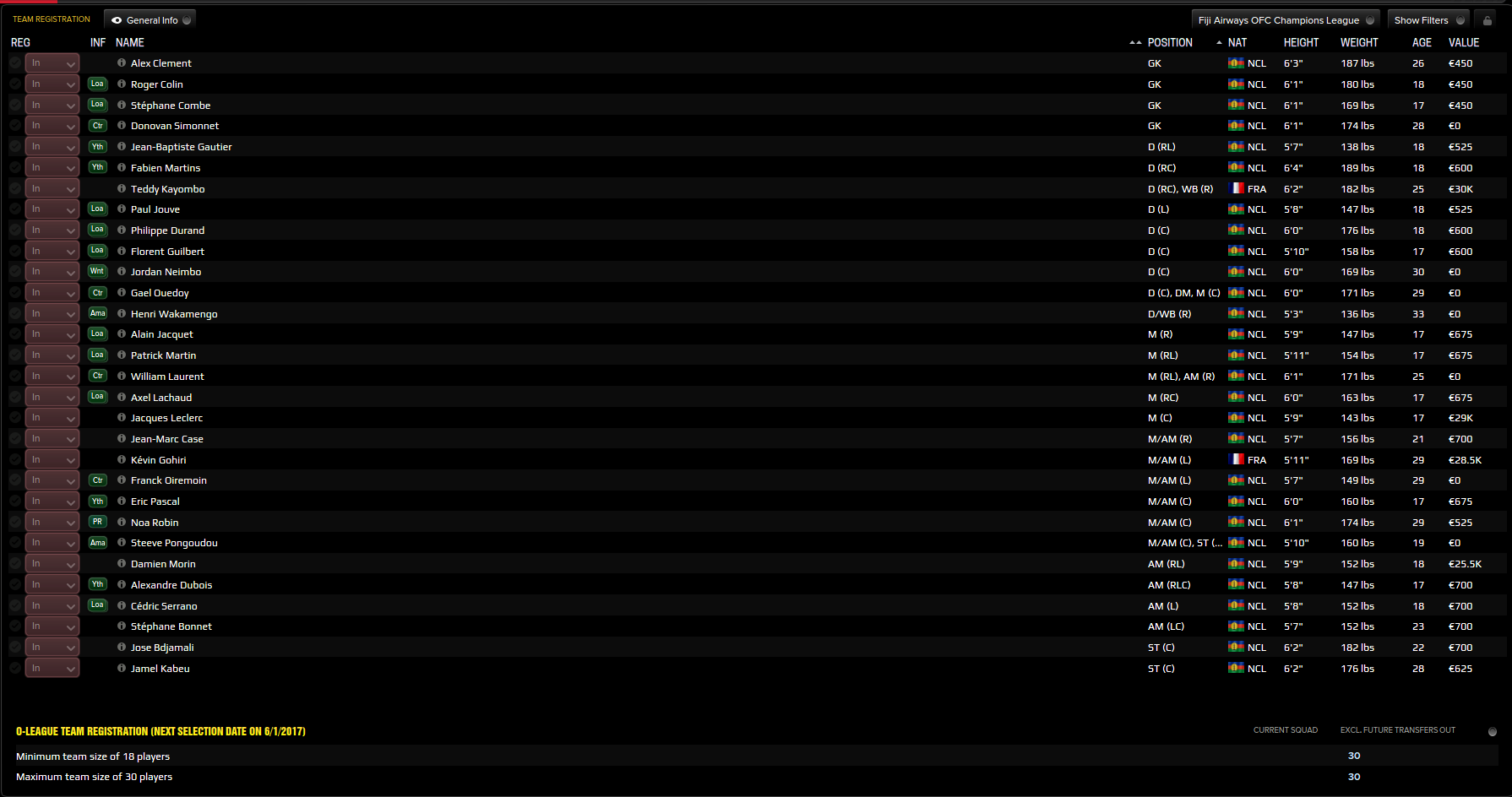 Finally the end of march brought the end of the transfer window.. Here are the moves that were made during the window.

Griffo
6 years
Time for you to make a mark in the Champions League!
Login to Quote

mgriffin2012
6 years
Brilliant start to the season and time to go take the Champions League by storm!
Login to Quote

Justice
6 years
An emphatic start to the season!
Login to Quote

For the 2016 Group stage it was one to remember for many reasons. We saw a club who we all thought would advance stumble from the beginning and fail to advance. Then we had a few clubs unexpectedly advance. Finally defending champions Auckland City flew threw the group stage as expected. Group B was the strongest group with two clubs (Auckland City and Amicale) advancing to the Semi-Final. Here is the recap of the 2016 OFC Champions League Group Stage Tables. 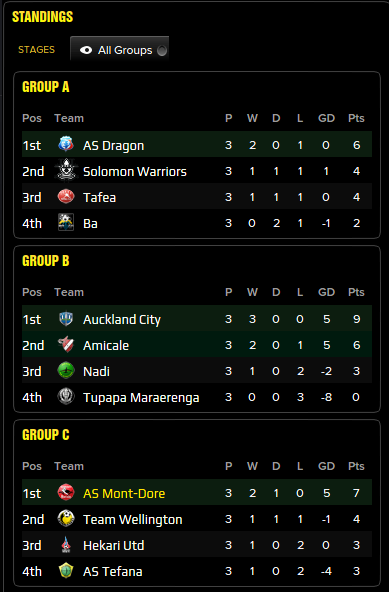 Now for the draw of the 2016 semi final. From here on out the final two matches will be taking place at North Harbour Stadium in Auckland. The match dates are set for 20 and 23 April.

Wow I can't believe we have made it this far and that we were able to play Wellington the way we did. That was the match I had thought we would lose as they are a much stronger team than us. It gives me hope though as we might be able to go toe to toe with other big time New Zealand based clubs. Our group was all sorts of weird as Wellington got smashed and the club that got smashed by them got smashed by us.

Now on to the semi final. Well holy shit we have a chance to advance. This club Amical of Vanuatu are a really good team but I think we have what it takes to pull off a victory. I was shaking so much before we found out who we would play. I had though we would get Auckland City, oh well if we win we could face them. Who knows this has been a weird Champion League this year.
Login to Quote

mgriffin2012
6 years
well done on progressing to the semi finals mate! hopefully you can go all the way!

AS Mont-Dore surprise all with Champions League victory The 15th edition of the OFC Champions League is finally over. In what was a crazy year for the competition the final proved to be one of the best in history. For New Caledonia's AS Mont-Dore it was a fairy tale journey. It was their first ever final and they were the big time underdogs. Here is how the two clubs got to the final.

Before the match we got to see a bit of a war of words between both managers and it seemed real heated. Mont-Dore's Kévin Gauthier had started the exchange by saying that Auckland City was over looking his squad and they better watch out. While Auckland's Ramon Tribulietx had said he was ready to show Gauthier who truly belonged. After the match Gauthier tried to shake Tribulietx's hand but was rejected.

In this match the underdogs were playing a very defensive game because of such a gap in talent. It seemed to frustrate the Auckland City players as they had trouble scoring. City's Micah Lea'alafa was the first to score during the 10th minute. You could see that the Mont-Dore bench was starting to panic. They would answer two goals of their own by Damien Morin in the 42nd' and 53rd'. After that Mont-Dore seemed to be in control and went back to a very defensive style of play. Jamal Kabeu and Kévin Gohiri would score back to back in the 78th' and 79th' minutes. It seemed as if Mont-Dore had this locked down but Auckland would score their last with a goal by Elimiano Tade in the 86th minute.

It was then over Mont-Dore becomes the first club from New Caledonia to win the title ending Auckland City's run of five straight titles. This was also the first victory by an non New Zealand club since Hekari United won it back in 2010.

"Many say parking the bus is not a good strategy but at times it is necessary and we needed to do that to win," Gauthier went on saying "This was an amazing O-League for us and I still can't believe we did this, now it is time to focus on returning next season. Oh yeah I can't wait for the Club World Cup in December.

As Gauthier said AS Mont-Dore will be the representative of the OFC this upcoming December in the FIFA Club World Cup. Like last season it will be taking place in Japan with the dates still to be determined. We wish them luck in their domestic season and the upcoming FIFA Club World Cup.
Login to Quote

Maybe someday I will. The great thing about this is that you never know haha.
Login to Quote

April was the best month in club history as we went on to win the OFC Champions League. In league play we had a total of four matches and won every single one. The match of the month comes from the match against Tiga Sport. During this match we would win 4-0 and continue a five match cleansheet run. The run ended in the first match after Champions League. Gaïtcha would score two on us after we returned to action. Now on to the most important event in club history. In our third ever O-League appearance we won in dramatic fashion. This gets the club to the FIFA Club World cup in December. What was impressive was the signing of Damien Morin. Reports are that he went to Gautheir as the tournament began asking for playing time and Gauthier gave him the green light. Well that might have been the best move because Morin gave us two goals in the final beating Auckland City.

Next month will be a busy month in the league. We will be facing five clubs and four of the matches will be at home. The feature match is against rivals AS Belep. The match is set for 7 May at home. Below is the schedule for May.