Griffo
6 years
Does he want to be involved in football after he retires?
Login to Quote 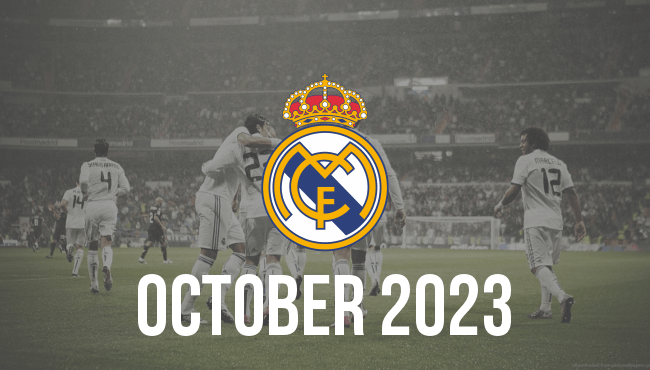 Real Madrid Powered Through An Important Month Early In The Campaign

The month began brightly with an important win away to fellow Champions League chasers Bayern München. A return to league action saw Real Madrid score six as Granada were tossed aside before an international break. Victories against Athletic Bilbao, RSC Anderlecht and Celta de Vigo rounded off another impressive month for Los Blancos. 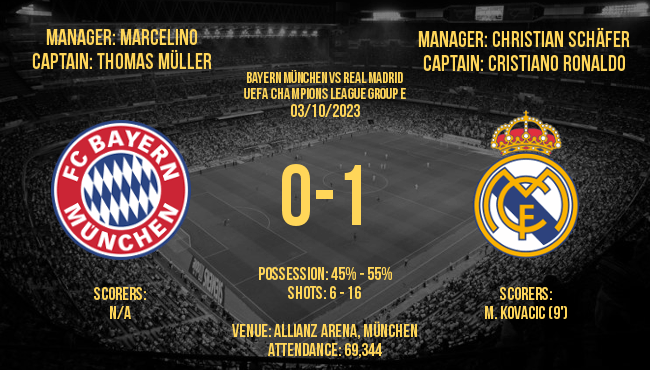 It was a tense affair decided by just the one goal as impressive rearguard action from both sides kept the game rather uneventful.

Mateo Kovacic scored the only goal of the game, and it was before ten minutes had even been played. Danilo picked out Cristiano Ronaldo in the box but Real Madrid's captain saw his shot saved by the opposition goalkeeper. The ball then fell kindly for Kovacic who made no mistake in sweeping home the rebound, securing the victory for Los Blancos. 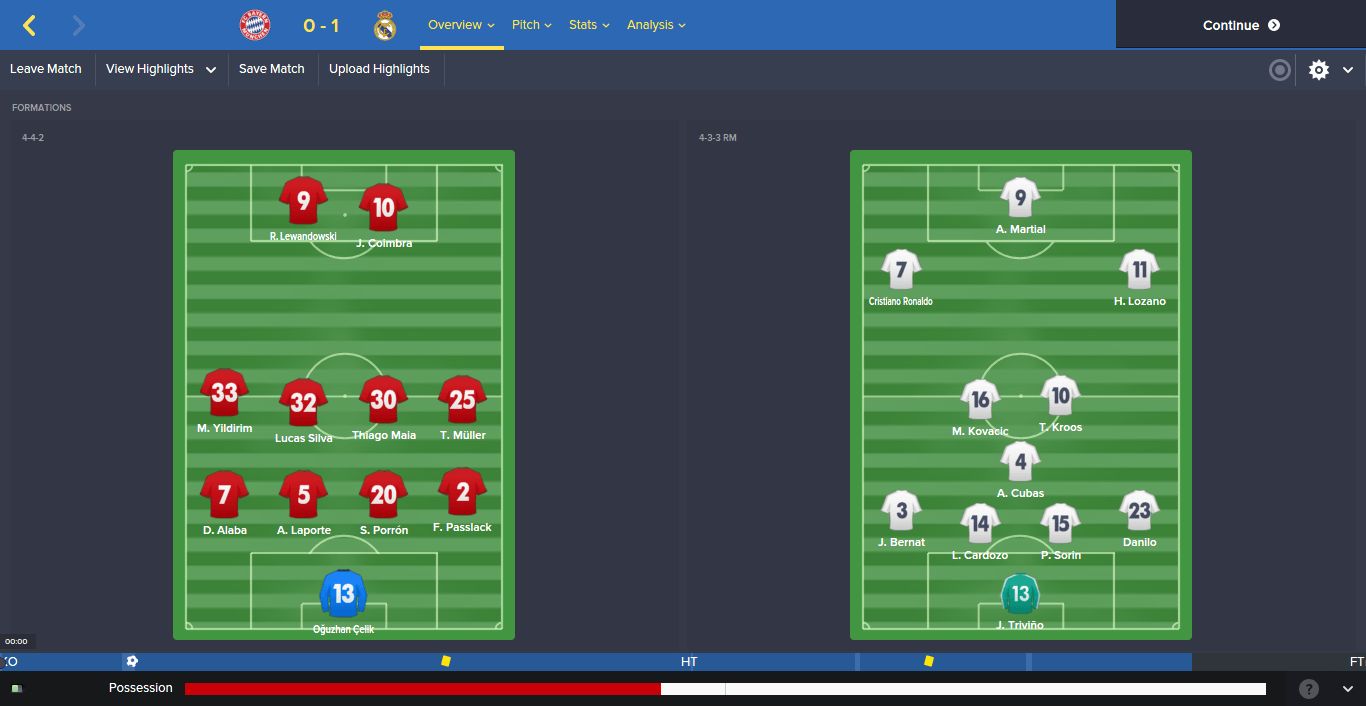 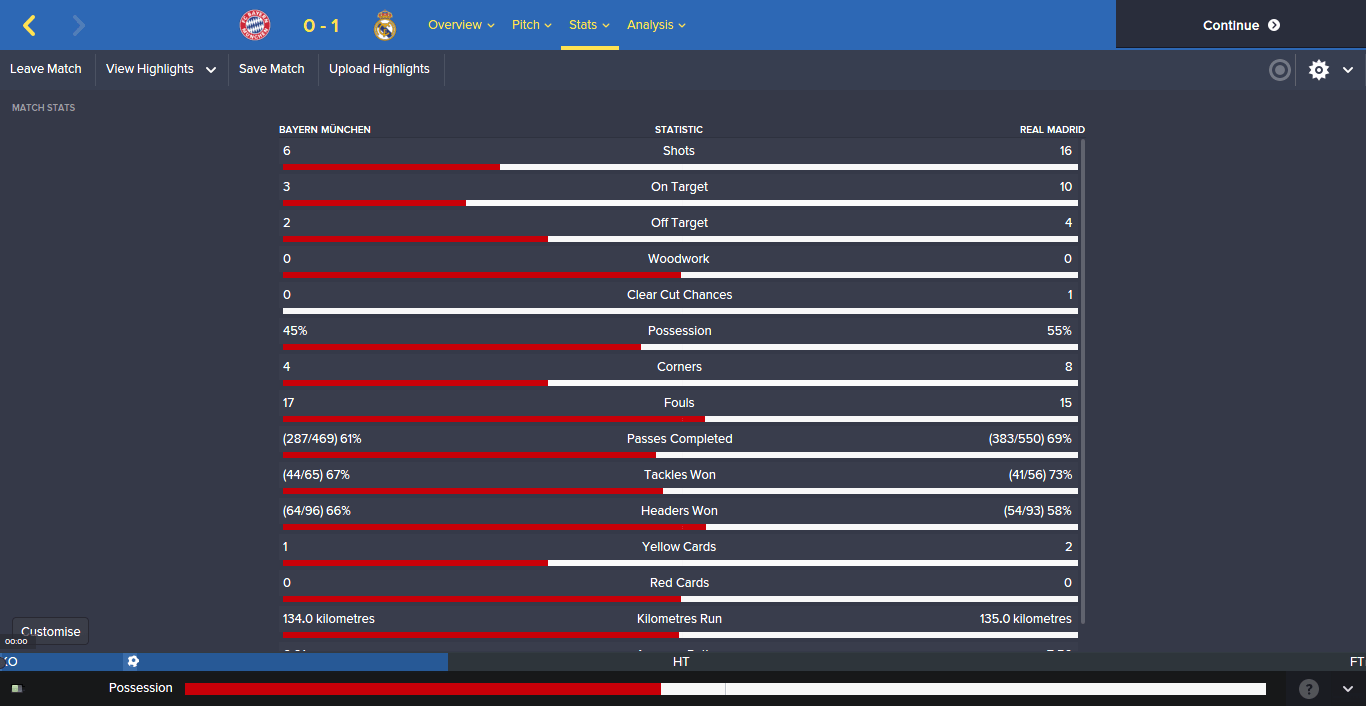 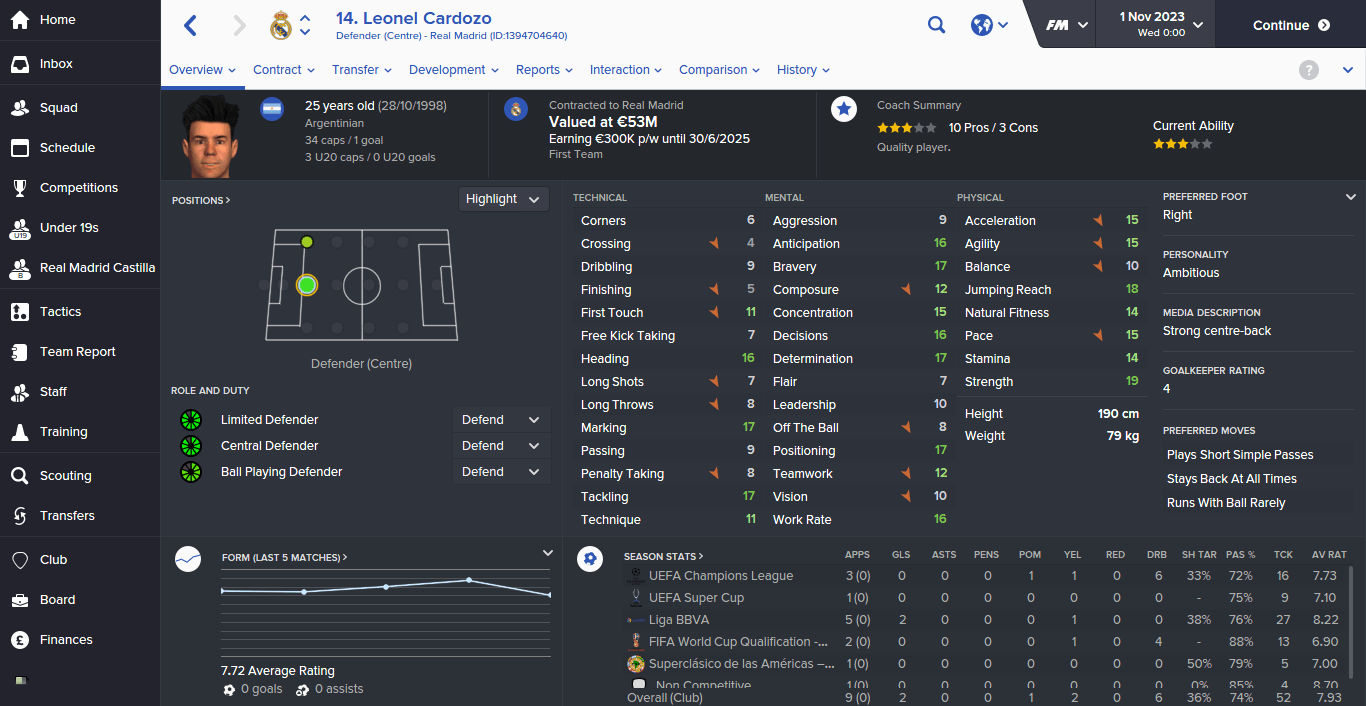 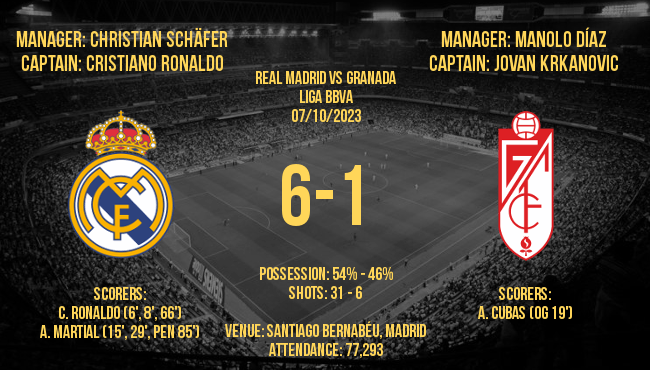 A number of changes were made to the squad to accommodate Real Madrid's fringe players, including Sergio Rico and Mario Pasalic, but this did not make much of a difference to a rampant Los Blancos side who put Granada to the sword six times.

Anthony Martial and Cristiano Ronaldo were the heroes of the game, each netting fantastic hat-tricks to condemn Granada to defeat. An Andrés Cubas own-goal marred what was otherwise the perfect performance in many regards. 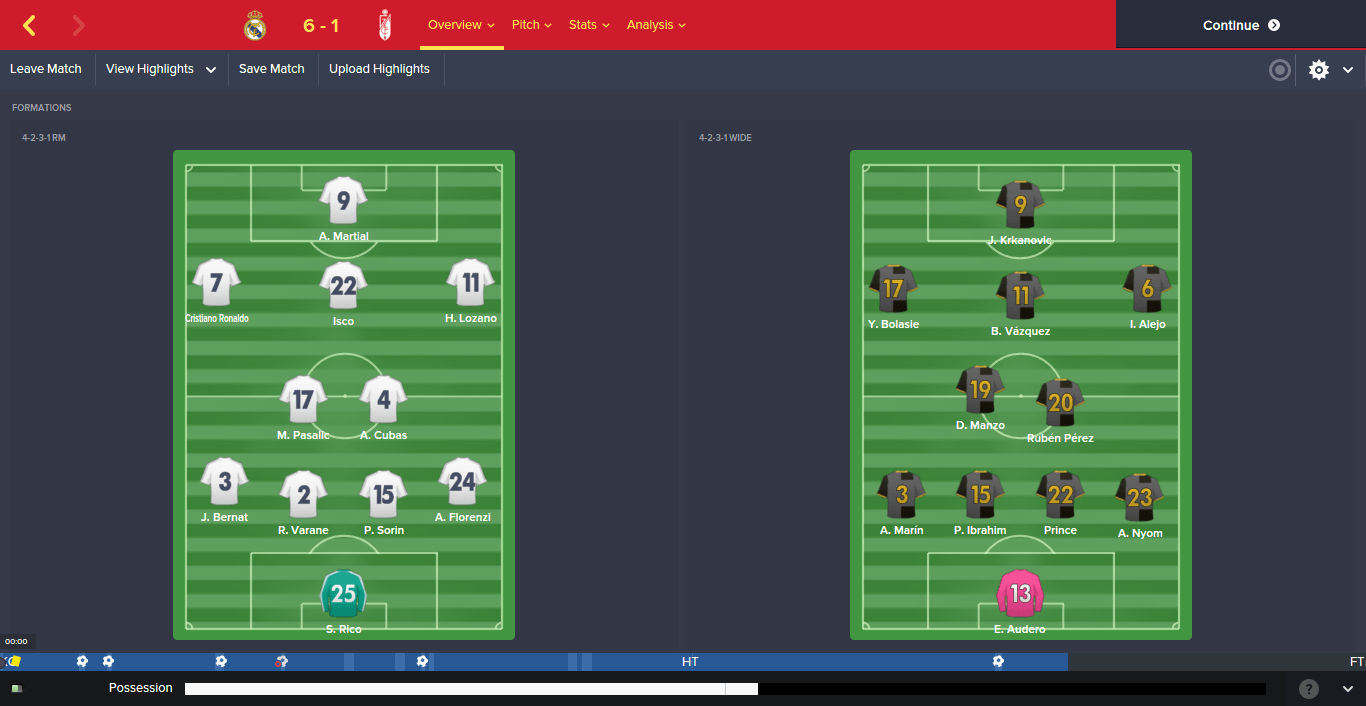 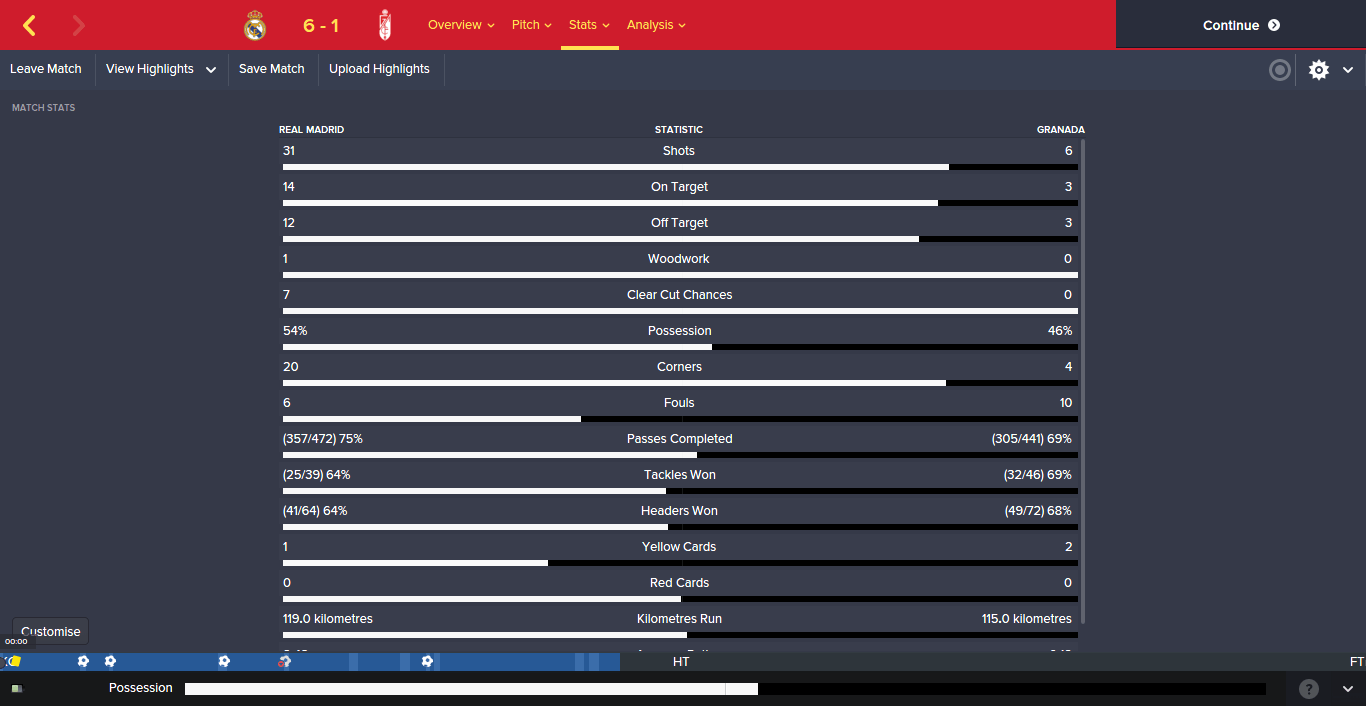 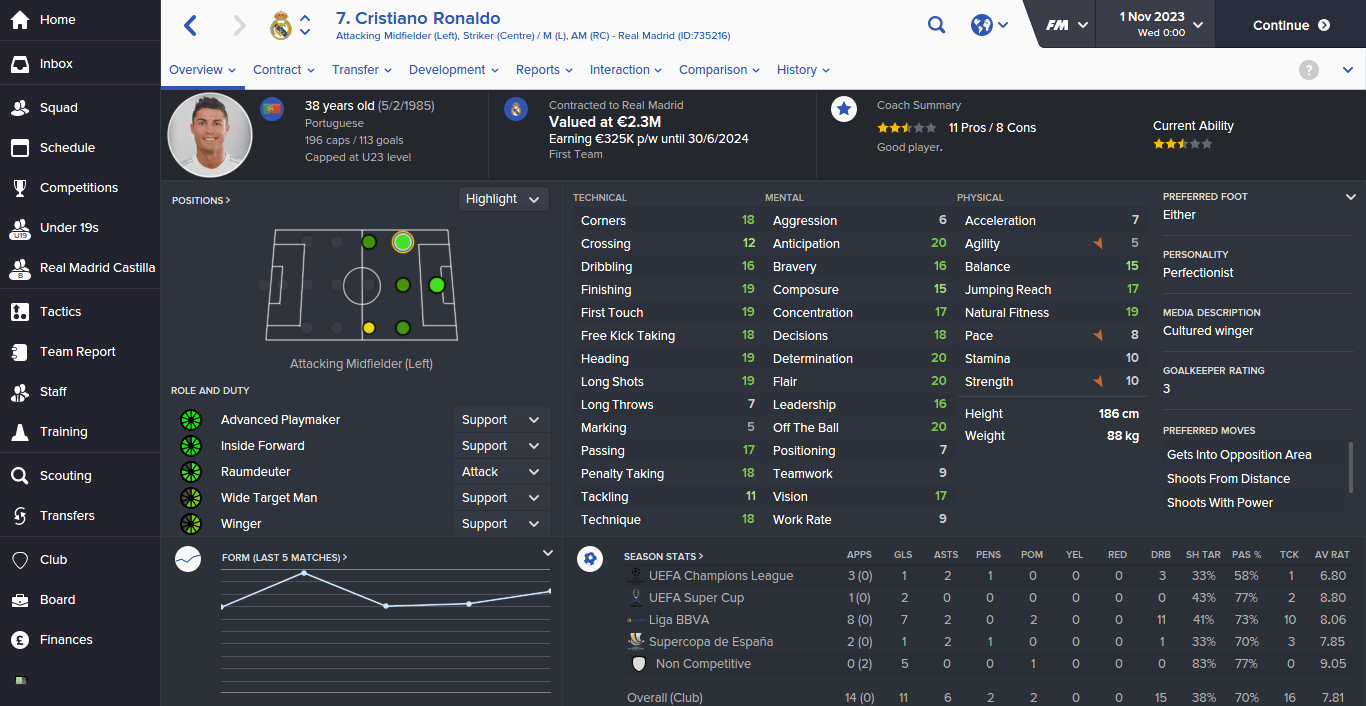 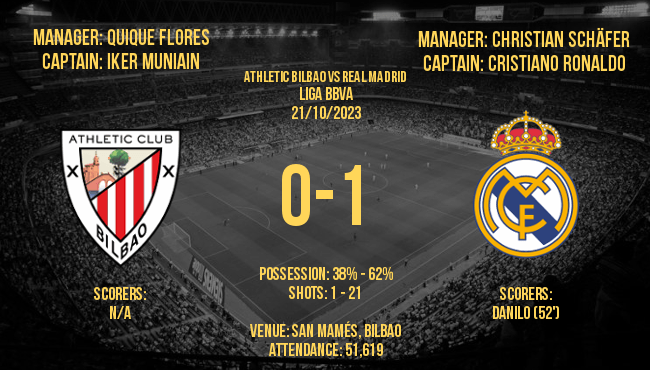 The scoreline does not reflect Real Madrid's superiority in this fixture. Twenty-one shots to one says it all. Danilo scored the only goal of the game with a powerful effort, but Anthony Martial missed from the spot late on after being awarded a penalty. Poor finishing nearly cost Real Madrid in a game where they had to win to continue to assert their dominance in the league. 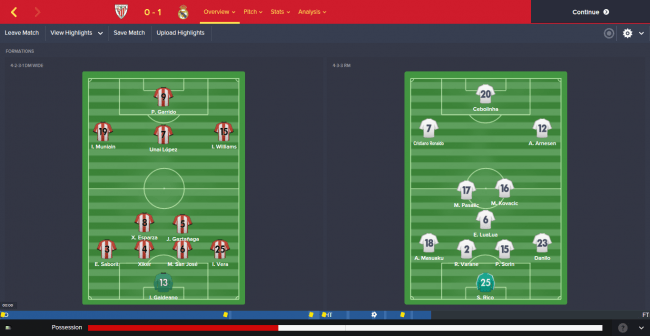 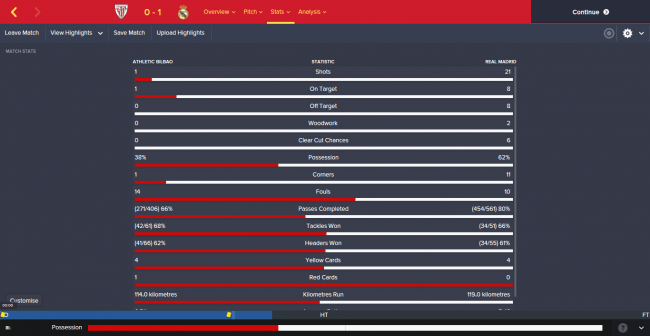 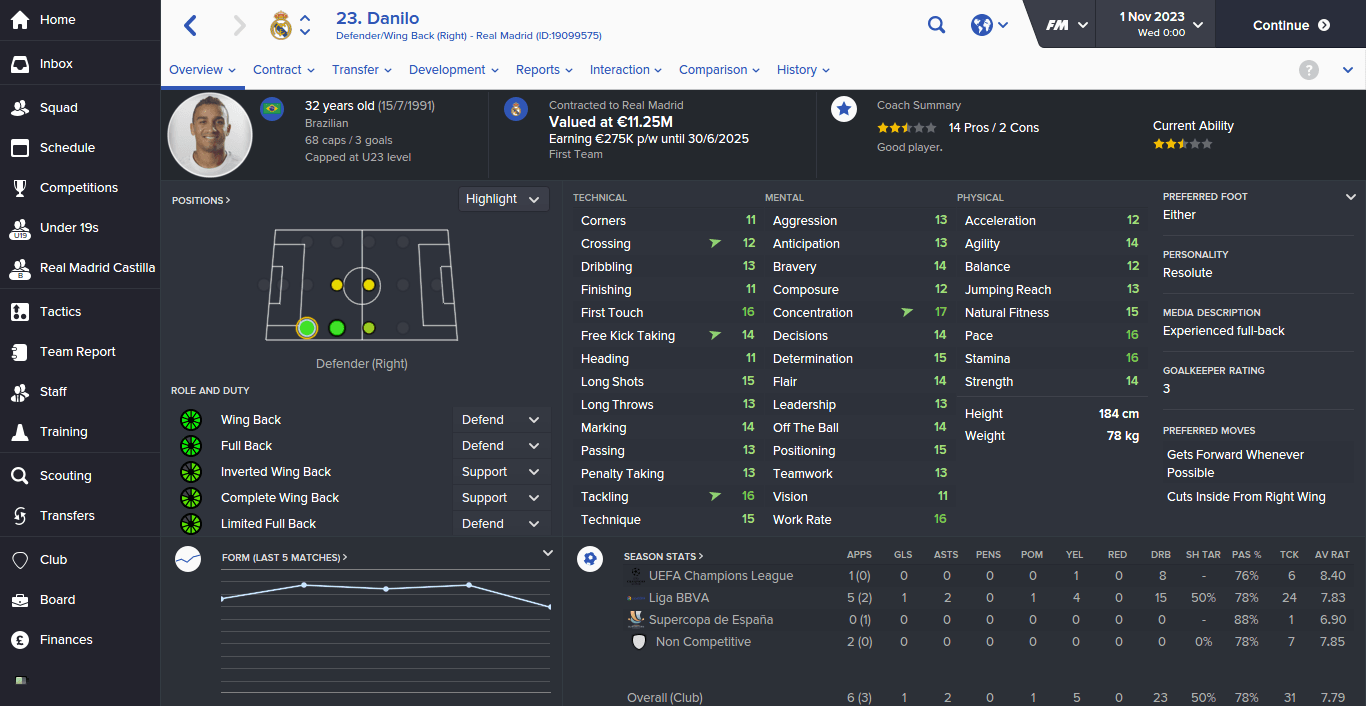 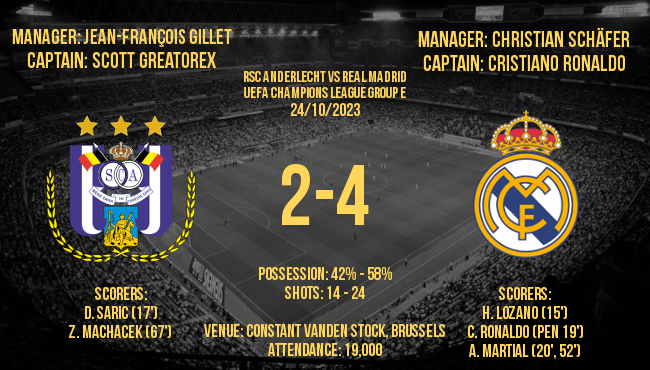 Victory in this game put Real Madrid on the brink of qualifying for the next round, having won three games from three. Many expected a weakened Los Blancos side to turn out against Anderlecht, but a full-strength team made to the pitch to secure all three points.

Hirving Lozano opened the scoring with a well-executed header before Dalibor Saric scored a rebound to level the game. Cristiano Ronaldo's penalty goal minutes later restored Real Madrid's lead, and Anthony Martial scored his first of the game moments after that with a well-placed finish after breaking free of the defense. Ronaldo's cross was deflected in to the path of Martial in the second half to allow him to score his second of the game, and Real's fourth. Zdenek Machacek pulled one back for Anderlecht but it was too little too late. 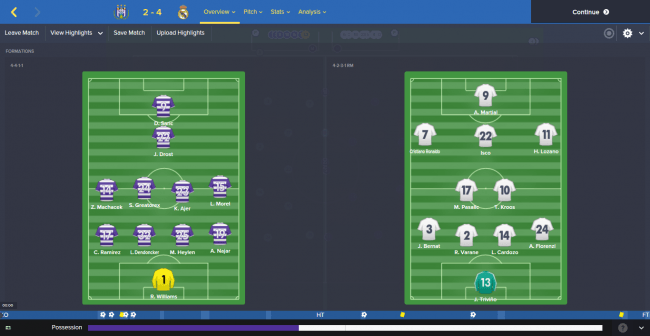 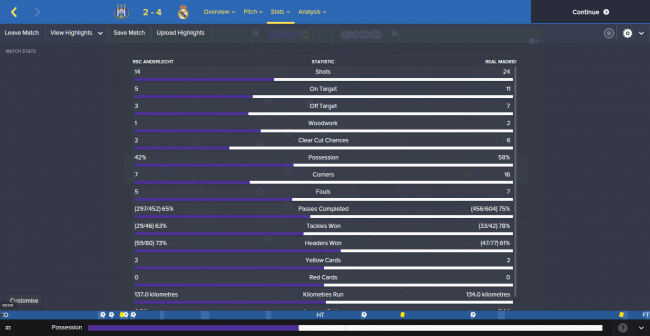 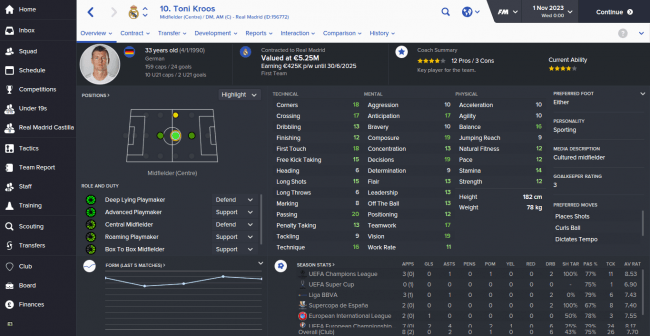 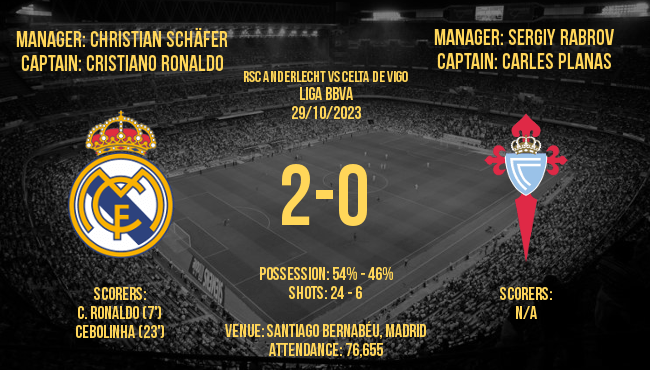 Real Madrid produced a composed performance to defeat Celta de Vigo in the league to round off another successful month. Cristiano Ronaldo scored one of the goals of the season when he floated a shot over goalkeeper Rubén Blanco's head and in to the far corner from a very tight angle outside of the box. Cebolinha added to the scoring when he drilled home a first-time shot from Toni Kroos' low delivery, to secure all three points for Real Madrid. 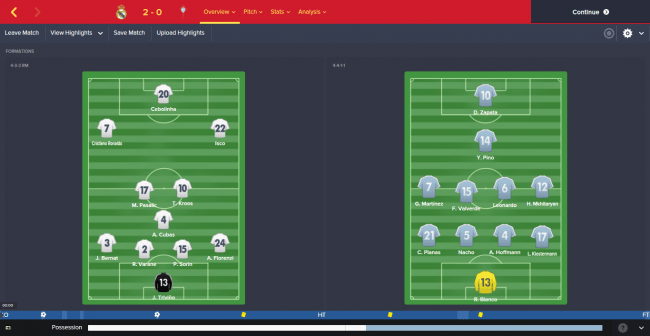 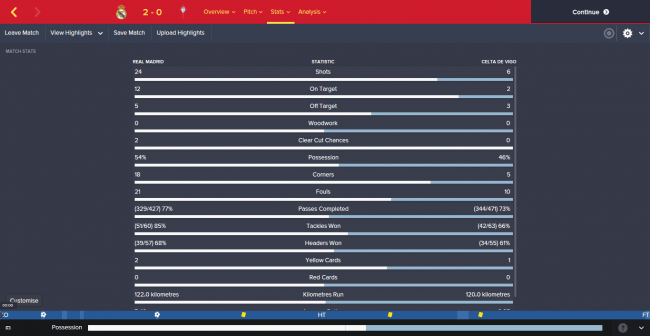 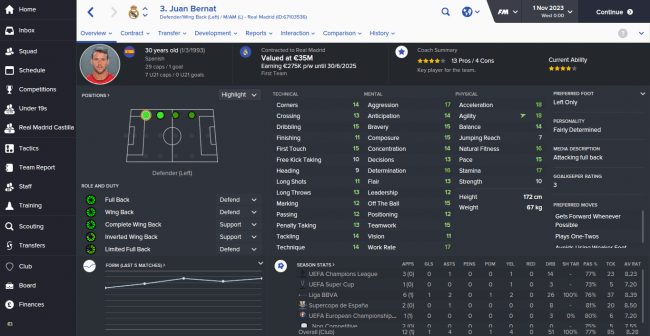 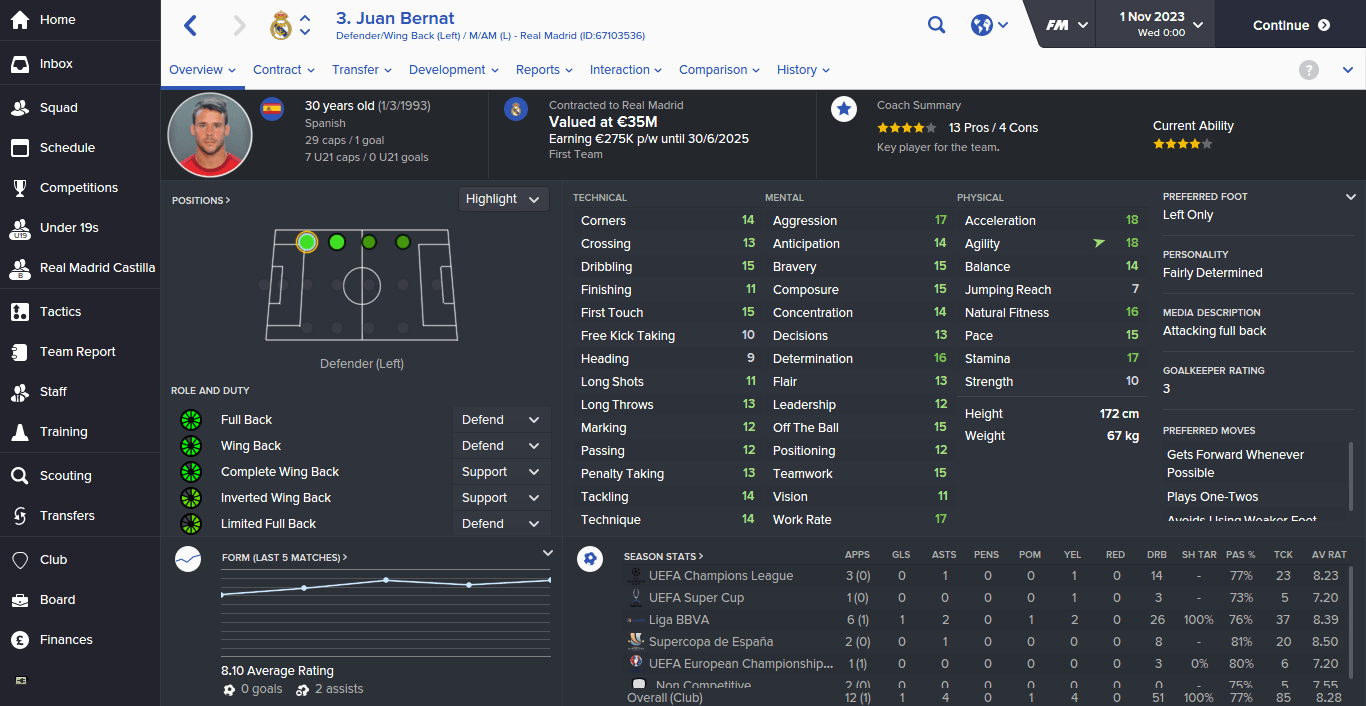 Player of the Month just had to be Juan Bernat. The Spanish left back was in terrific form, defending well on his flank and producing fantastic attacking play. He already has a goal and four assists to his name this season and looks to add many more before the season closes. 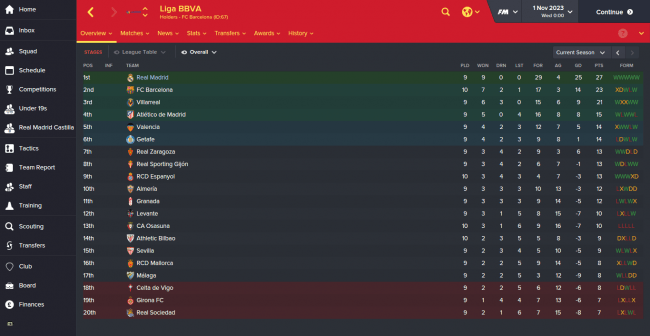 The league has been easy-pickings for Real Madrid so far, as they now sit four points ahead of Barcelona with a game-in-hand. Real Madrid's superb goal scoring record has continued, putting every other team to shame. 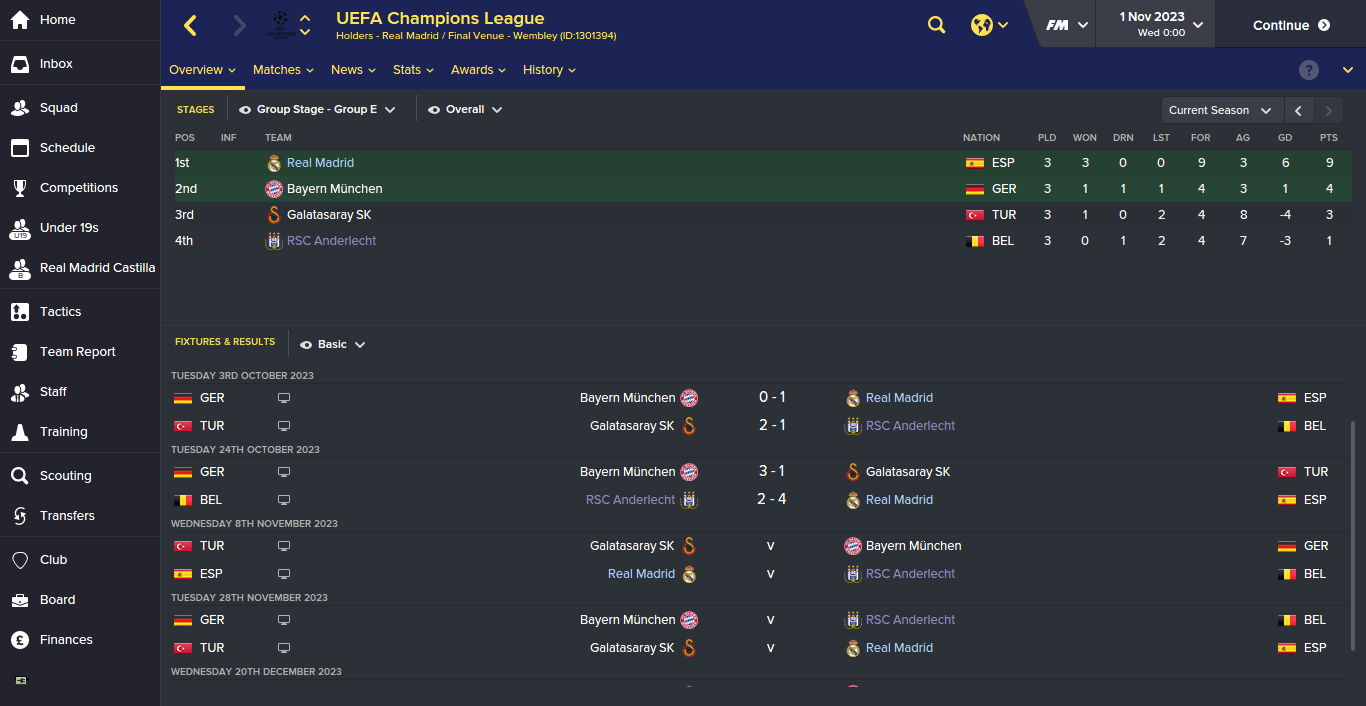 Three wins from three means Real Madrid are comfortably on top of their group. Die Bayern are second on four points, five behind Real Madrid. It does look like qualification to the next round is secured for Los Blancos, with three games yet to be played.

Next up is the Madrileño derby against Atlético Madrid, at the Vicente Calderón. It will certainly be a tough fixture for both sides as both clubs look for bragging rights. A home fixture against Levante comes before a tricky game against RSC Anderlecht in the Champions League. Real Madrid will then play against Real Sociedad before the international break, and will return to action at the Camp Nou in an El Clásico against FC Barcelona, the third of the season so far. Real Madrid will end the month with a trip to Turkey to face Galatasaray in the Champions League.

ninjaskill
6 years
Well that was a decent month, I guess winning every game is alright
1
Login to Quote

mgriffin2012
6 years
Another brilliant month mate, think there is definitely silverware on the horizon!
1
Login to Quote

BeanyUnited
6 years
I may have been away from the site for over a year (don't be too sad that I am back!!) but your ability to write has not gone I see mate!

Great month and I am enjoying the story very much

Jack
6 years
Some amazing detail into these monthly updates

This is crazy, man!
1
Login to Quote

ScottT
6 years
And unsurprisingly another dominant month..
1
Login to Quote

A big thank you to those who voted for me in the most recent Story Of The Month award, which saw this story (somehow) come out victorious! I couldn't have done it without you, the readers.

I am aware that updates have stagnated somewhat, and this was due to my eagerness to forge ahead with the save and to power through as many months as possible. As a result, I have now well-completed the season with Real Madrid and I will post a season review shortly.

I will be looking to alter my updating style in future updates to bring some diversity to my writing. Once again, thank you to all the readers for following and supporting the story, and I hope that you will enjoy the future content of the life of Christian-Schäfer!
Login to Quote 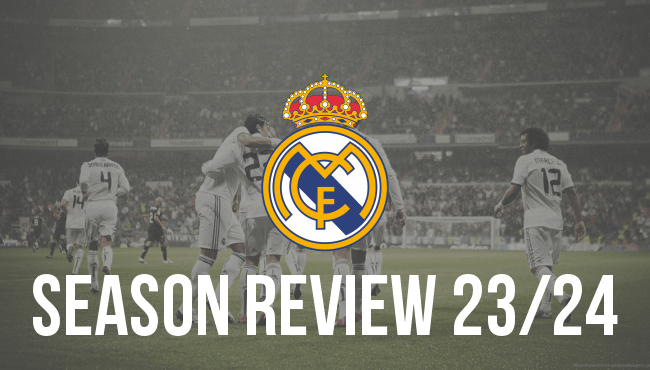 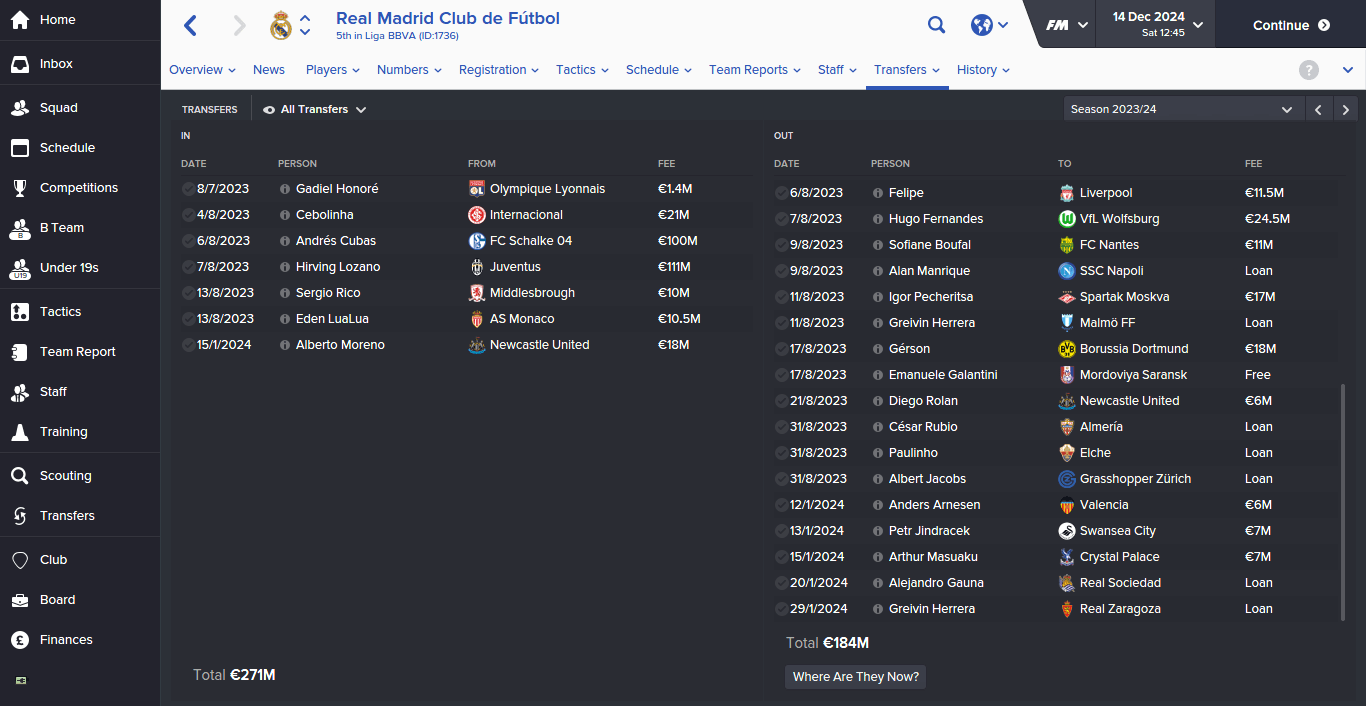 With the exception of Alberto Moreno, details of the players signed by Real Madrid over the course of the season can be found in previous updates. Big signings included deals of €100M for Andrés Cubas and €111M for Hirving Lozano, while a number of fringe players left the club in cut-price fees.

Leicester City would be Christian Schäfer's opponents in his first competitive fixture as Real Madrid manager, and the scene could not have been much bigger than the UEFA Super Cup final. A brace from club captain Cristiano Ronaldo inspired Los Blancos to victory, and you can find a comprehensive report of the match here.

The Supercopa game the Real Madrid manager his first taste of El Clásico action, and his side were certainly successful in a 9-0 aggregate victory. This proved to be Christian Schäfer's second piece of silverware of the season, and you can find a comprehensive report of the match here.

Victory in last season's UEFA Champions League meant Real Madrid would participate in the FIFA Club World Cup, as representatives of Europe. Club América and Palmeiras proved to be no match as Los Blancos fired their way to the title of world champions. 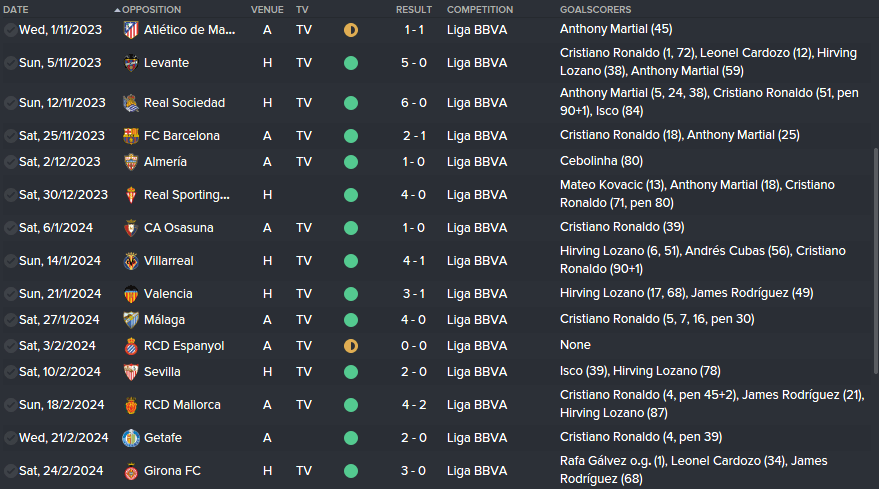 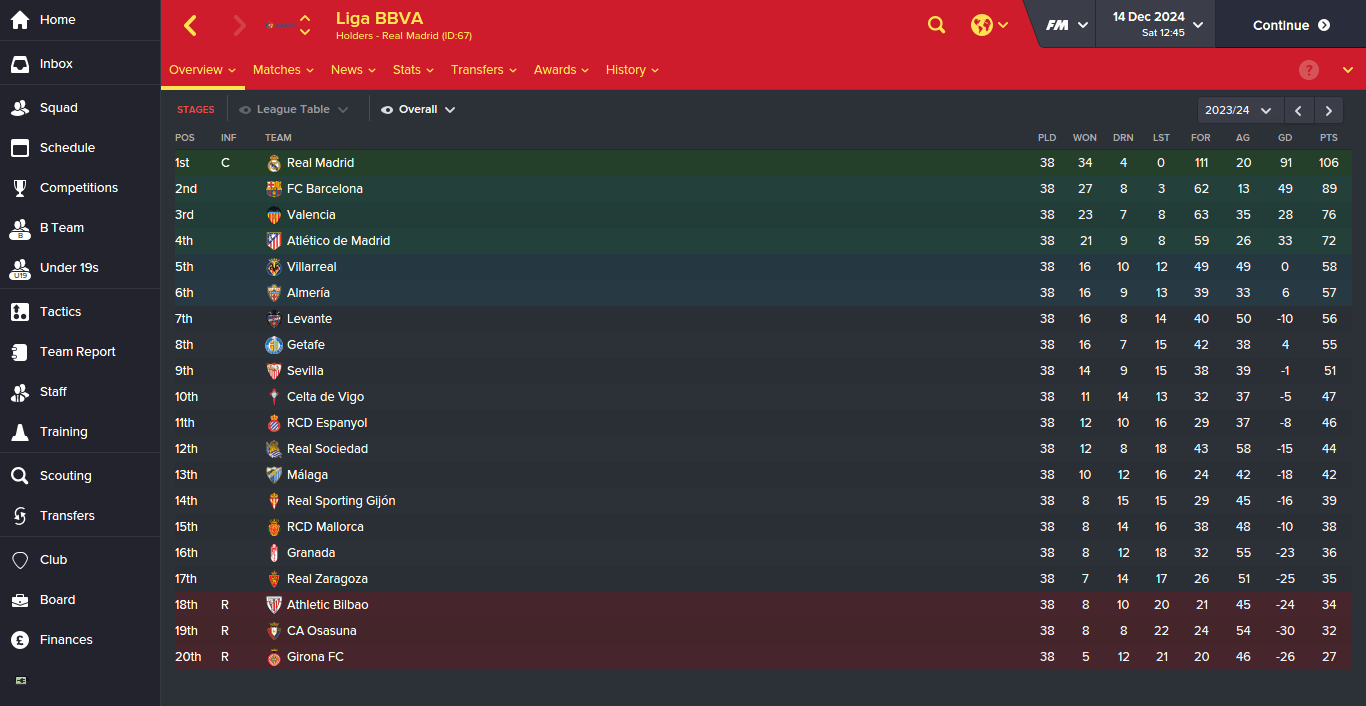 In the end, it was a landslide victory for Real Madrid in the league. Seventeen points separated the champions and second-placed FC Barcelona. 111 goals were scored by Los Blancos in a rampant season as Cristiano Ronaldo's 34 league goal haul, in his final season of football, claimed the golden boot.

Arandina proved no match for Real Madrid in the 4th round, with Los Blancos winning 14-0 on aggregate. Both Real Sociedad and Celta de Vigo were overcome as Real Madrid reached the semi-finals. Cristiano Ronaldo inspired his team to victory, leaving Barcelona as their final obstacle, in the final. It was a thrilling spectacle which was brought to extra-time at 1-1. Toni Kroos scored his first goal of the season, from the penalty spot, before Lionel Messi came on as a substitute to equalize for the Catalans. Alessandro Florenzi scored his first goal of the season with two minutes remaining of extra time to secure Real Madrid's fifth trophy of the season.

Six wins from six in the group stage saw Real Madrid progress to the Las 16. Red Bull Salzburg proved no match, but Real Madrid would face Barcelona in the quarter finals. Restricted to a 0-0 draw at home, Los Blancos faced an uphill battle in the second leg at Camp Nou, but an own-goal from Silvan Widmer and a Cristiano Ronaldo wonder-goal secured passage to the semi finals. A familiar opponent in the form of FC Bayern München stood in their way but a 3-1 home victory looked to have put Real Madrid on their way to the final. However, a 3-1 reverse was enough to bring the tie to extra time in the second leg. A quick tactical shift was made by Christian Schäfer, and it paid dividends as Cebolinha and Hirving Lozano scored to secure a place in the final for Real Madrid.

The final should have been Cristiano Ronaldo's final game, but a severely twisted ankle meant he would have to watch from the stands. He was not the only missing player, as Anthony Martial, James Rodríguez and Raphaël Varane would miss the clash against Manchester City, at Wembley. This prompted a shocking tactical switch by Christian Schäfer, as his team lined up in a 4-6-0 formation. The striker-less system did its job, as a brace from Isco secured Real Madrid's 13th UEFA Champions League title, and their second in as many years. What a season!

ninjaskill
6 years
Well that was quite a good season then I guess. I mean 7 draws is a bit on the unaccepetable side
1
Login to Quote

Griffo
6 years
What else is there left to achieve... #perfectseason
1
Login to Quote

mgriffin2012
6 years
What a season! This being Real Madrid though, the board is still trying to find a reason to sack you

Congratulations on the Story of the Month crown too mate!

Atoobie
6 years
what a season bud, everythings come at once for ya

SOTM and the end of an incredible season. New challenge maybe?
1
Login to Quote