OlleM13
3 years
Nice graphics man! I'm really interested to see how you will do in your new sport! Keep it up
Login to Quote

Tallery
3 years
Great update! Looking forward to seeing how you make this work!
Login to Quote

mgriffin2012: Thanks man
Login to Quote

ScottT
3 years
Typical, something about Finland and hockey is brought up

Scott: Of course man, why wouldn't I lol
Login to Quote 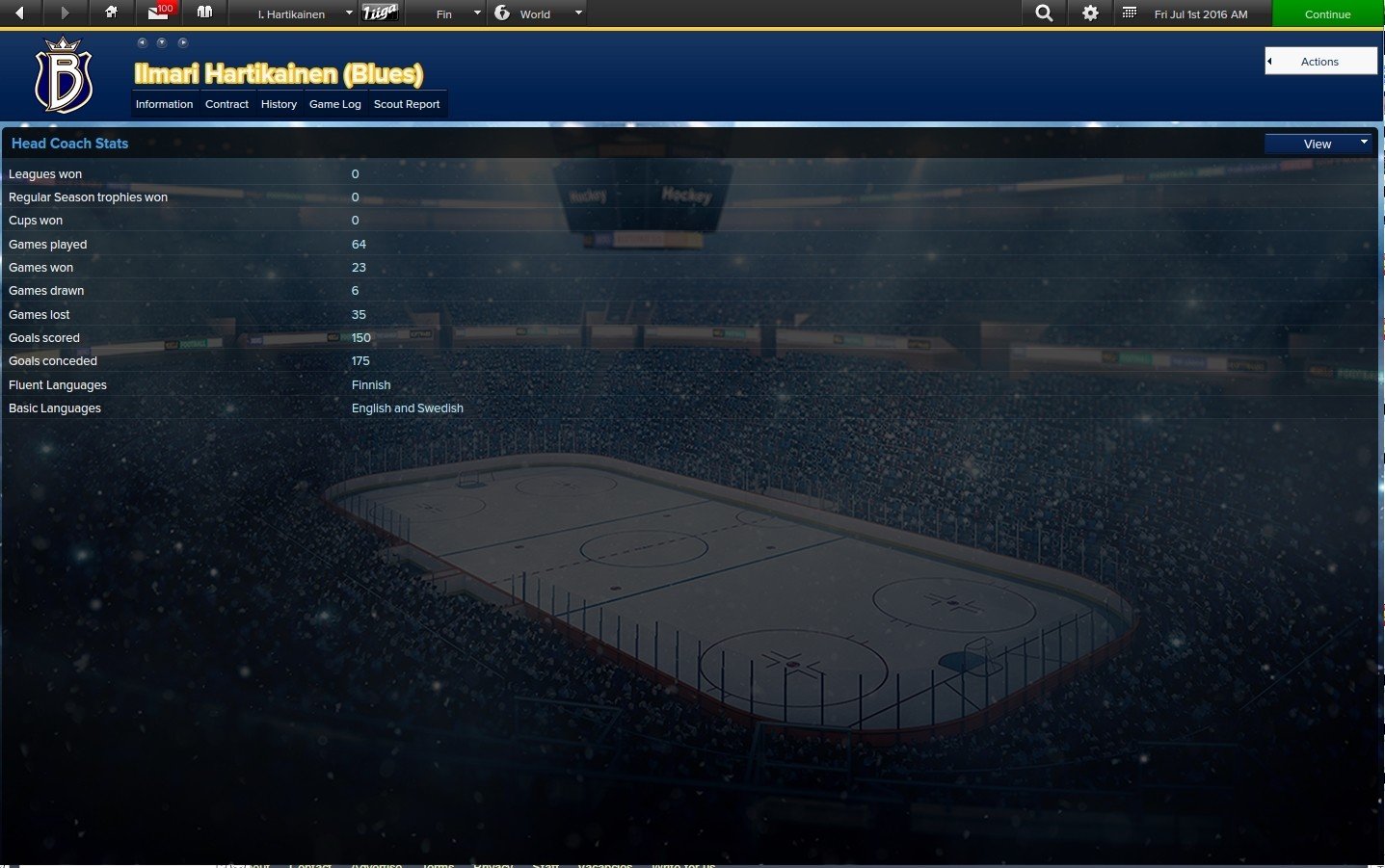 
As I had said earlier, I was named the head coach of the Espoo Blues after the current head coach was fired. I knew going in it would be a tough season but I had no clue it would be as rough as it was going to be.

I would say for my first time leading a team in a role like this I fared decently despite all the challenges presented to me that season. I feel having to coach with so many things in your way like finances can easily build your character and it gives you a different perspective.

In the 2015/16 SM-Liiga campaign I lead my club to a 23-6-35 record. Obviously looking at the numbers it does not look like we were that good. Well there were many games too close to call and I was really pleased with the way things went. Sadly in the Champions Hockey League we were eliminated with losing two games and winning just one.

Everything was going good for me as I knew I was going to return to coaching the club in the next season as the board were pleased on how I did. So you all can know the season starts in September and the regular season ends after the first week in March. I was well as the club had an early vacation and things were looking good that next season we would continue.

I tried to not focus on the teams finances as that would have put even more roadblocks on the season so I honestly had no clue how bad things were. Looking back I should have paid more attention.

On the morning of 21 March I was told to come to the club office for an emergency meeting. I was thinking I was going to be let go or something. Maybe we were bought out by someone and no longer in debt. Another thing that I was thinking was that the KHL was going to add us a club, there were rumors about us being the second Finnish club in the league.

Well I found out that the club was officially shutdown as the owners declared bankrupsy. I was in shock because I thought we were going to be fine. I know clubs lose money but I had no clue we lost €4 million in total. This was a major shock and sadly I was now out of a job.

So now that I was terminated for my job with Espoo it was time to put my name back out there. I don't care if its another head coaching job or anything else I just want to continue coaching. So let me ask this is anybody looking for a new head coach?? Please contact me.
Login to Quote

mgriffin2012
3 years
Think this story is going to be good, ive just got that feeling!
Login to Quote

mgriffin2012: You know it man
Login to Quote

ZakNikFMP
3 years
MIx is up but I hope football part will come soon. Love yours grapichs aswell.
1
Login to Quote

After having to vacate my head coaching position in Espoo I surprisingly was able to get hired to another club in the country. I was hired to become a coach with HIFK in the Capital of Helsinki. I was signed to a one season contract so I needed to work real hard.

It was a pretty good fit for me because I was not under heavy pressure as I was in Espoo but it was still a very hard job because HIFK is considered one of the top clubs in the nation and we have a lot of great expectations from the fanbase.

You see HIFK or Idrottsföreningen Kamraterna, Helsingfors is a multi-sport club and their fans are crazy. No matter if it was against Jokerit in hockey or the Stadion Derby against HJK the supporters pretty much dictate how our jobs are so no need to mess things up.

It was a great season for us winning the league in the regular season. This got us to make the playoffs as the top seed. Sadly we didn't make the finals, instead we played in the bronze medal match and won 6-2. That was a great way to cap off the season and it gets the club to the Champions Hockey League for the upcoming season. 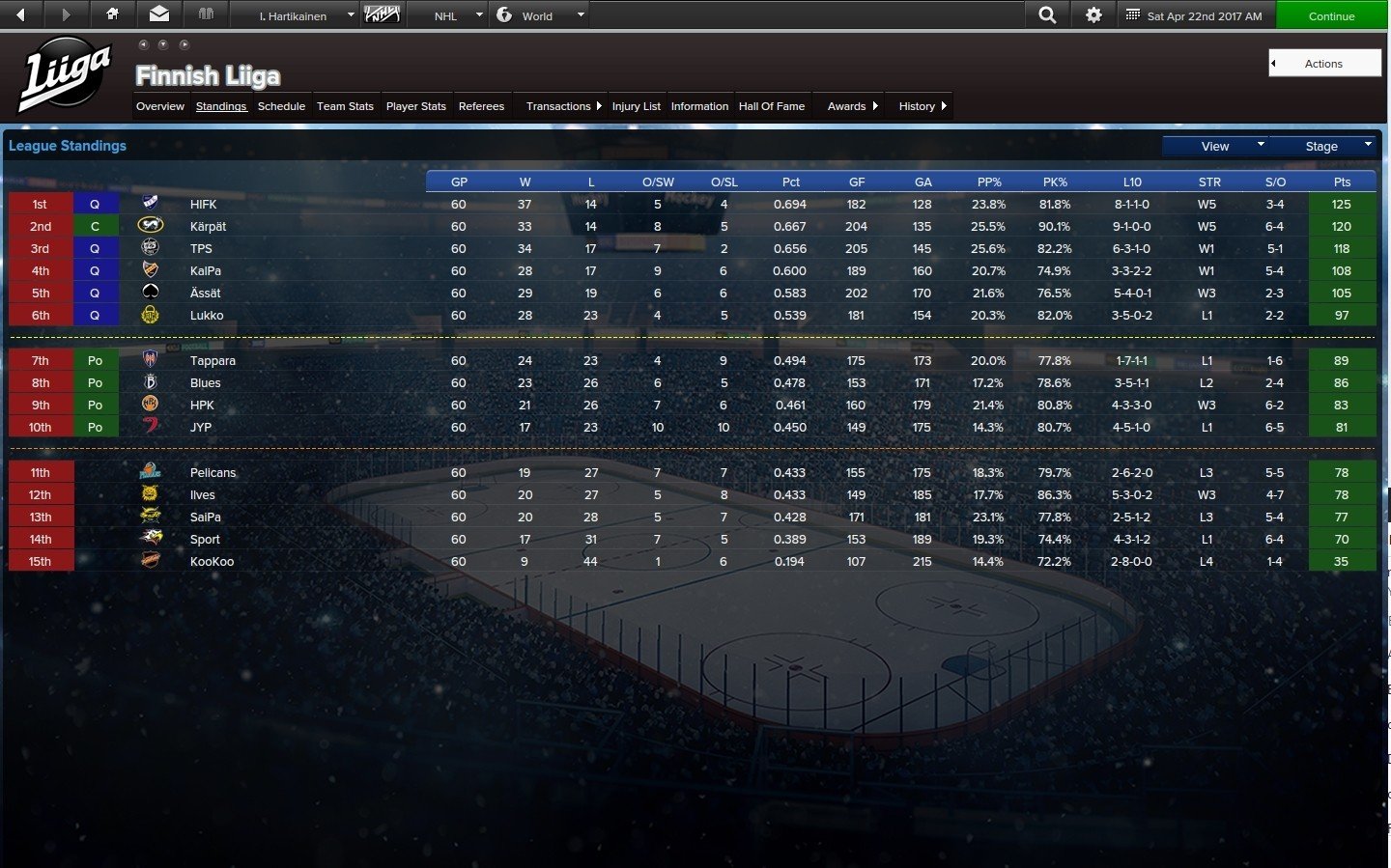 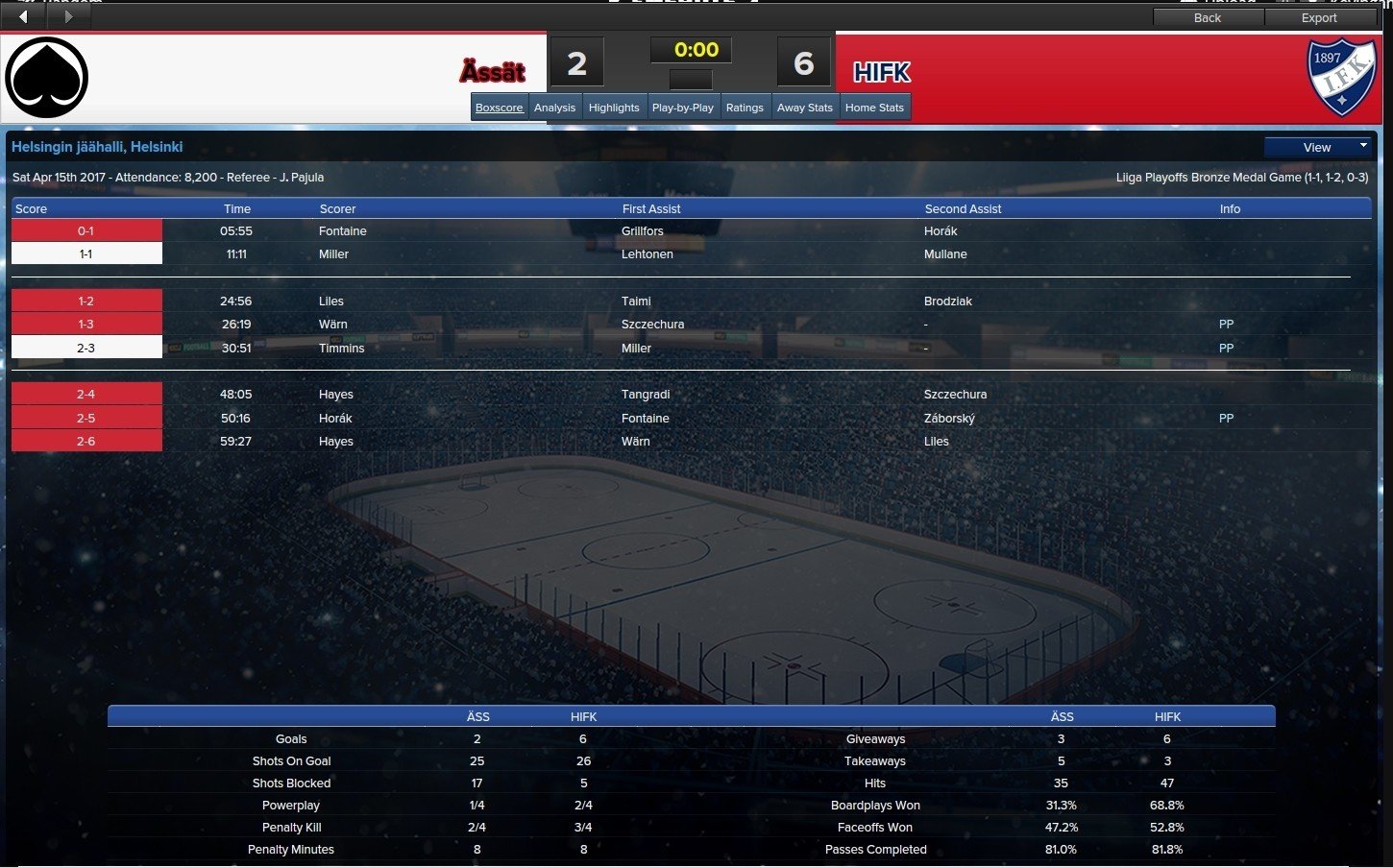 
Despite all of that my contract was not renewed at the time of final contract renewals a month later. So I am now out of a job. This honestly really sucks because I did a great job it was just that I really did not fit in with the HIFK way of life. I totally understand that and am really bummed out about that. Oh well

That leaves me unemployed once again. It is crazy I have in the last two seasons worked with two different clubs. That might seem bad but I am still young and there is still a lot of time in my life. So with that I have decided to take the 2017/18 season off from coaching in the pros.

As I announced that I will be taking the year off from hockey, I decided to move back home to Tampere and just let things happen. Look I am in my 30's and still single, which is not fun at all but now that I have time to be in one once again and just relax a bit. For work I am not sure what I will do but one thing for sure is to coach a few hockey camps and give skating lessons.

Also despite the fact it's those idiots at Ilves I want to catch some football matches this summer. I have said before that football might not be my favourite sport but I can totally appreciate the athleticism and tactical side of things. Maybe this could be what gets me into the sport just a little bit. Just to reiterate I WILL NOT BE SITTING OR SUPPORTING WITH THOSE CLOWNS OF ILVES!!!!!!
Login to Quote

footi job on the horizon?
Login to Quote

MJK46
3 years
Atoobie: I am thinking of a job in chess

You are reading "From the Rink to the Pitch: Ilmari Hartikainen".