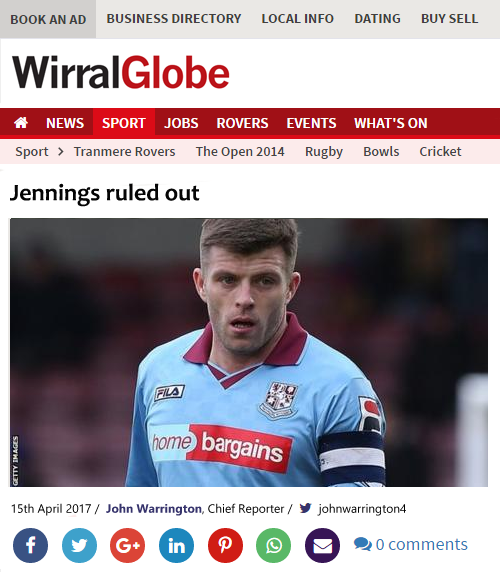 Tranmere have been hit with an injury blow following their match against Aldershot, after it was revealed that Steve Jennings faces a month out with a groin strain.

The Tranmere captain picked up the injury in the 60th minute of the 1-1 draw with Aldershot and walked off the pitch holding his groin, being replaced by Taylor Tombides. The injury came about when Jennings pulled up chasing after a ball with Aldershot defender Liam Wakefield. After the match, Tranmere boss Micky Mellon was quoted as 'fearful' and he was right to be after a scan revealed the extent of the midfielder's injury.

"I spoke to Steve after the match and he said he was fine but I was worried and I was right to be. Steve went for a scan today at Arrowe Park and it's been confirmed that he'll be out for about a month with a groin strain. Obviously it's a big blow for us as Steve is a great player but we have players who can come in and replace him. We should be ok. We may look into recalling Mitchell Duggan as a precaution."
Login to Quote

Tranmere came from a goal down to beat Guiseley at Nethermoor, Ben Tollitt and James Norwood finding the net for the men from Merseyside. 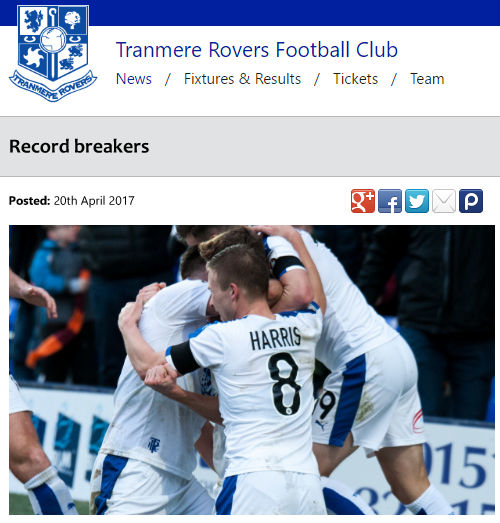 It has been confirmed that Tranmere have broken a number of National League records during the 2016/17 season.

The first record broken is for the most number of points in a National League season, beating Crawley's 2010/11 record of 105. Tranmere's win against Guiseley took Rovers to the 109 point mark so Rovers have now been confirmed as the official record holders.

Tranmere have also set the record for the most wins in 1 season in the National League. The current record stood at 31 which was set by Aldershot in 2007/08. However, Tranmere now have a total of 34 wins in the National League to hold the new record. The record for most goals in a season has also been broken by the men in white. The previous record was Barnet's 103 in 1990/91, a total Tranmere have gone past.

Speaking on the official Tranmere Rovers Youtube channel, top scorer James Norwood said it was a testament to the hard work the lads have put in this season.

"It's fantastic to see that we've broken a number of records. The gaffer came in during the summer and he's completely revitalised us. Everything is a lot more professional now and we know exactly what to expect from him and ourselves. He works us hard but everyone has taken it into their stride and we are now reaping the rewards. The hard work continues next season in the football league."
Login to Quote 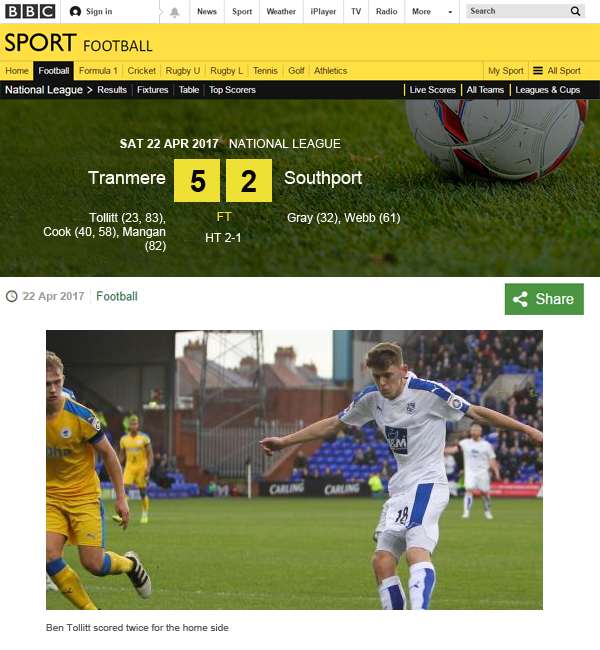 Ben Tollitt and Andy Cook both scored twice as Tranmere eased to a 5-2 win over Southport at Prenton Park. 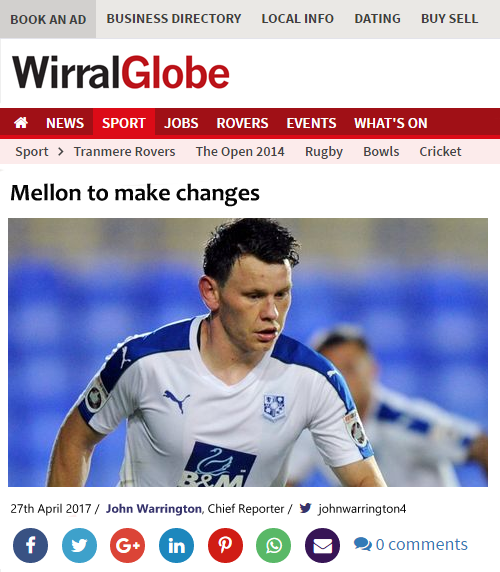 Tranmere boss Micky Mellon has confirmed that he will make changes to his side for their last National League game against Maidstone at the Gallagher Stadium.

After already winning the National League title with a record number of points, the game against Maidstone effectively means nothing to both sides. Mellon will have one eye on the FA Trophy final in a few weeks where his side take on Lincoln at Wembley. It is for this reason that Mellon has decided to make changes for their clash with Maidstone.

"You'll see some changes, for sure," said Micky Mellon.

"I am aware that there will be many people who are saying that this is a bad decision that could blow up in my face but I think they are wrong. We have already won the National League title and it's clear that some of the players are starting to suffer from some fatigue. The game against Maidstone is a fantastic opportunity for the fringe players in the squad to show me what they've got ahead of next season."

"Connor Jennings and Lewis Collins will both play, as will Cole Stockton who deserves a chance to start. Adam Mekki and Adam Dawson will get a game on the wings and young Luke Pilling will get a start in goal. I'm really interested to see how young Luke performs, he's put in some cracking performances for the under 23's this season. "
Login to Quote 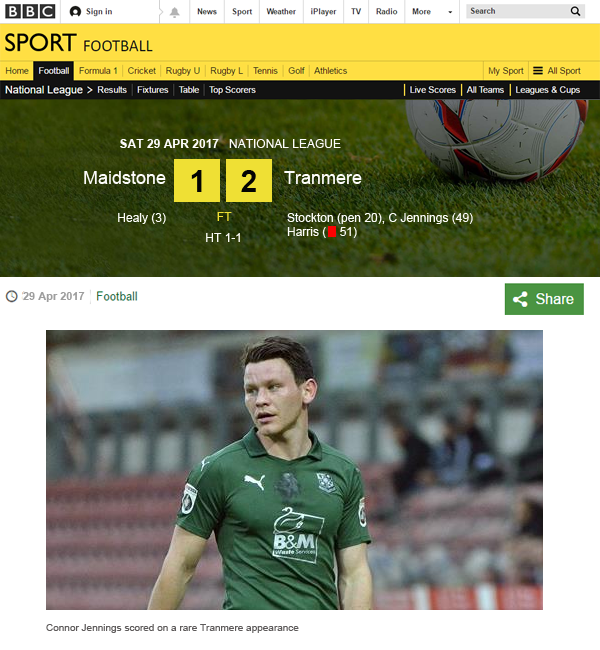 Tranmere finished the National League season with a win, a much-changed side beating Maidstone by two goals to one at the Gallagher Stadium.

Tranmere manager Micky Mellon has called for his players to deliver a 'professional performance' when they face Lincoln in the FA Trophy final at Wembley.

"We need to go out there and show that we aren't overconfident," Mellon told the Wirral Globe.

"So far this season, our success has come from going out there and taking it to our opponents. We need to make sure we do this on Sunday. For a lot of the lads, this is their first game at the home of English football so they will be nervous. It's up to them to get the nerves out of their system and go out and play like they know they can. We're all really excited about playing at Wembley but we need to do a professional job."

"We know exactly how Lincoln are going to play, they'll come at us early and try and find an early goal. What we need to do is make sure we don't let them do that. We need to be the side giving our fans something to cheer about, not the other way around. We know that we are heavy favourites but Lincoln are a good team and we can't underestimate them. We need to be professional and play like we have been all season."
Login to Quote

Tranmere won the FA Trophy for the first time in their history, Ben Tollitt scoring an extra-time winner to beat Lincoln by two goals to one at Wembley. 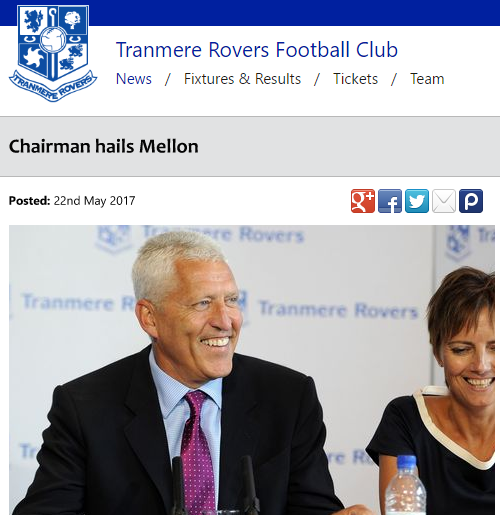 Palios was speaking after Tranmere lifted the FA Trophy following a 2-1 extra time win over Lincoln at Wembley. A James Norwood goal and a Ben Tollitt winner gave the men from Merseyside the win. Speaking on the pitch after the game at Wembley, Palios said:

"We really have a fantastic manager in Micky (Mellon). He has Tranmere playing a brand of football which is good to watch and is bring success on the pitch. When I hired him, it was for moments like this. I envisioned that he'd bring great things to this club and I'm delighted that I've been proven right."

"A lot of credit has to go to our players. They have been superb all season and you can really see the bond that they all have. James Norwood and Andy Cook have been an absolute force up front and Iain Turner and Steve McNulty have been rocks at the back. The lads will have a nice long rest now before we go again in the football league next season."
Login to Quote 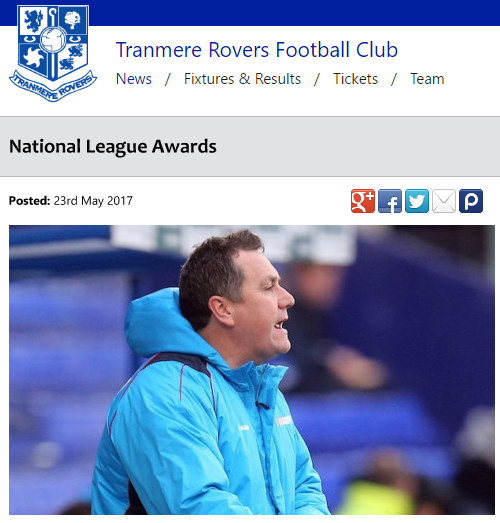 The winners of the National League end of season awards have been announced, with winners Tranmere picking up two awards.

Manager of the year has been awarded to Tranmere's Micky Mellon after his side romped to the National League title in their second year at this level. Over the course of the season, his side had a 78% win ratio, scoring 111 goals and conceding 53. His side broke the records for most goals, most points and most wins in a National League season.

Player of the year went to Lincoln's Theo Robinson. Robinson had a fine year, scoring 29 goals and assisting 13 in 36 games. Tranmere's James Norwood finished as top goalscorer, scoring 31 over the course of the season.

Goal of the season has been awarded to Chez Issac for his strike for Braintree against Forest Green in January. The central midfielder scored a screamer from 35 yards to leave the Forest Green keeper with no chance.
Login to Quote 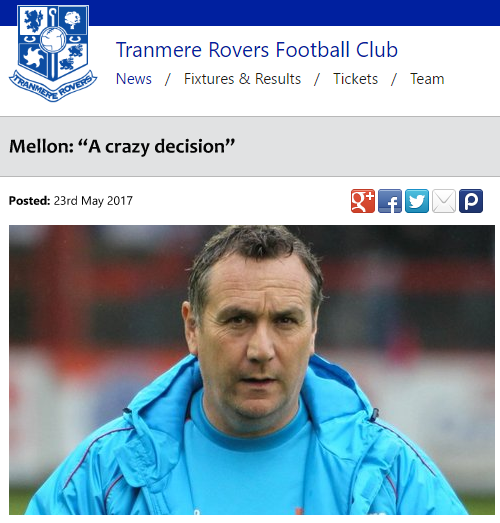 Tranmere boss Micky Mellon has launched a scathing attack on his National League counterparts after it was announced that James Norwood had not won the player of the season award.

"I'm absolutely gutted for the lad," said Mellon after the announcement.

"James has been in the form of his life this season and his goals have fired us to the title. He broke the National League record for most goals in a season, scoring 31 goals in 42 games with 13 assists. How can you turn around and say that he does not deserve to win the player of the season award?"

"With all due respect to Theo Robinson of Lincoln, even he will admit that James has been by far the best player in the league this season. I don't know if it is jealousy that has meant that he's not won the award or the stupidity of my fellow managers. He's the rightful winner in my eyes."
Login to Quote 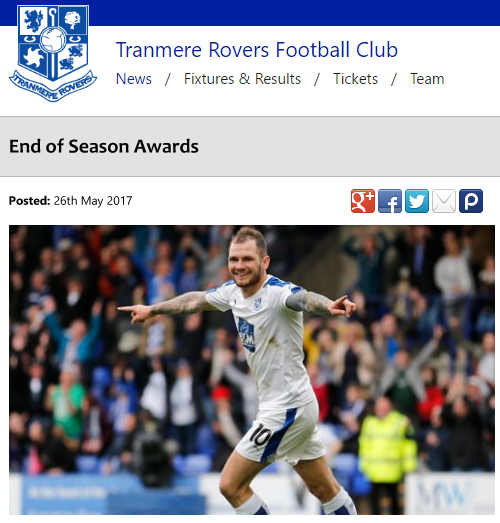 James Norwood won player of the season ahead of Andy Cook and James Wallace. Norwood scored 31 goals in 42 games in the National League, his goals helping Tranmere win the title and promotion back to the football league. Winger Ben Tollitt was named as the young player of the season after joining permanently from Portsmouth midway through the season.

The free signing of midfielder Lewis Collins, formerly of Reading, was named as the signing of the season. The midfielder played 29 games in the National League, scoring twice. James Norwood won the goal of the season award for his goal against Aldershot in April.
Login to Quote 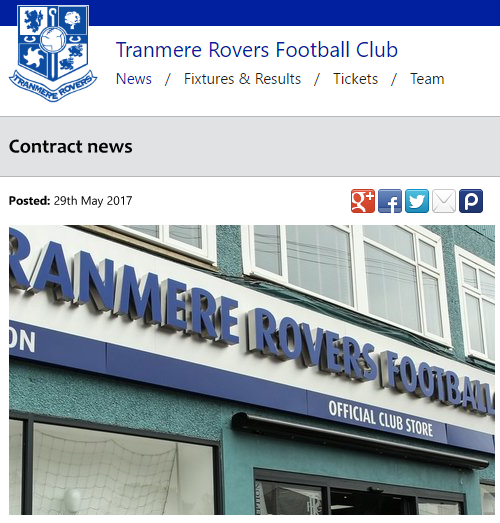 Tranmere Rovers have offered new contracts to a number of the first team squad for the 2017/18 season.

Cole Stockton, Mitch Duggan, Luke Pilling and Evan Gumbs have all been offered new deals at Prenton Park, while Stephen McNulty's contract has been extended by one year after the centre back activated an option in his current deal.

The Club will also be making offers to Lee Vaughan, Liam Ridehalgh, Michael Ihiekwe and Adam Buxton, and first-year scholar Declan Drysdale has been offered his first professional contract.

Manager Micky Mellon said: "I'd like to thank the players leaving us for their time at the Club and wish them the best of luck for the future. They've all played a part in us achieving a Club record points total this season. But we have to look to make changes to our squad, to improve in certain areas and this will free up some funds for us to try to do that."

You are reading "Tranmere Rovers - Who needs a lemon when you've got a Mellon!".