I started a career with Man City. Jose Gimenez from Atletico came in, Fernando, Clichy and Delph went on Loan.

I tried 2 tactics. The 3-4-3 by Conte and the 4-2-3-1 wide. The results aren't that great. I lost against Southampton, Swansea and Stoke. In the Champions League qualifaction, I had a lot of luck against AS Roma.

These are my 2 tactics. Can anyone give me some advice please? 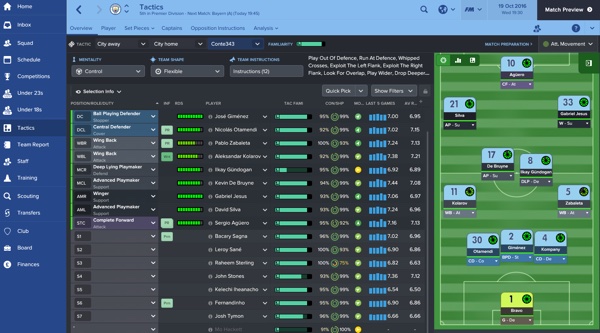 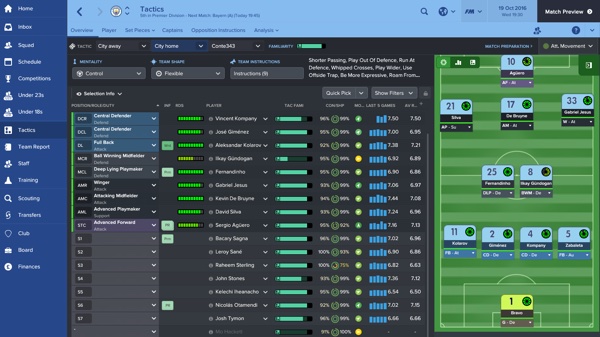 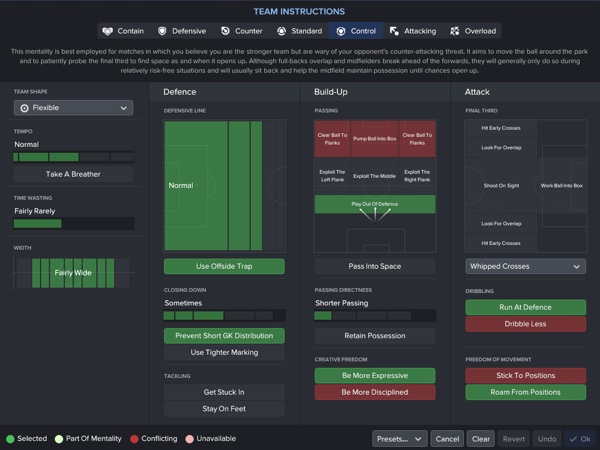 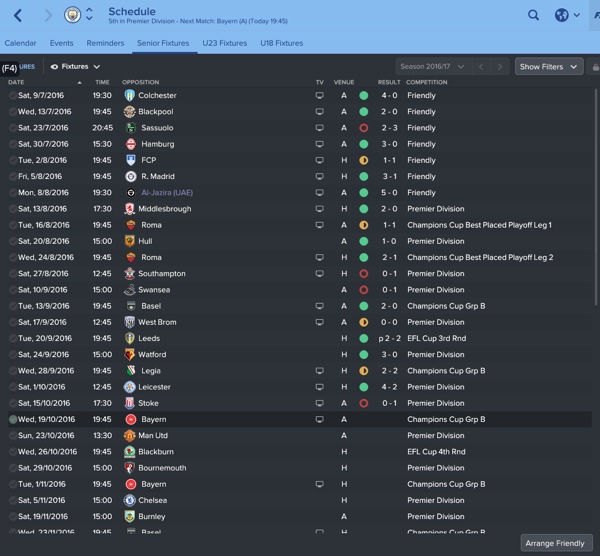 If you want to keep this formation or not. If you're playing 3 at the back, it's best to have one of the three as a libero(attack) much like David Luiz and 2 central defenders. Reason being he will move in front of them when you have possession of the ball, and if you don't he will move behind them. This will mean that you won't have much of a reason to defend (slightly deeper) because you'll be inviting pressure, instead defend (normal). Also, judging from Gundogan's rating, he has't been doing the job for defense or attack. My recommended midfield would be a Deep Lying play maker( Support) and a Box to Box. Aguero isn't a going to get on many crosses mainly because he's not big enough and he's isolated, the Box to Box midfielder will charge in the box occasionally and support him. You're also playing to wingers basically on the right with a winger and a wing back. Having players stick to the same position won't provide results. Either you make the wing back an inverted wing back to support the midfield or you make the winger an inside forward (attack) to get into the box more and cut inside leaving room for the wing back to cross. You're also playing Silva a little too deep for this style, have him attack rather than support, or switch him with De Bruyne or Sane to be an Inside forward. Another thing, don't exploit the flanks, the full backs at your disposal aren't great, and doing so will likely decrease possession of the ball, if you remove it you can suprie the oppostion on the wings as well as your attack will have more variety. (Suggestion)Try to exploit the middle as this will get more passes to Aguero as he can't move out wide as much because you have wing backs on both ends and wingers as well, so he's likely to drop deep or make a run. Also enable be more expressive to create more chances. Another thing, ill leave this for you to decide but if you're playing Control the it's not wise to drop deep or play at a high tempo. The thing with tactics is that they need to be flexible to your own style of play, the opposition will get more used to your tactics as the game goes on and that's why it's good to have a trump card. E.g increasing tempo and switching to attack.Sign some wingbacks/full backs btw. Also switch aguero with Iheanacho ocasionally. And sell Silva and sign a center back and a Goalkeeper, all just suggestions
Login to Quote

You are reading "Suffering with Man City".