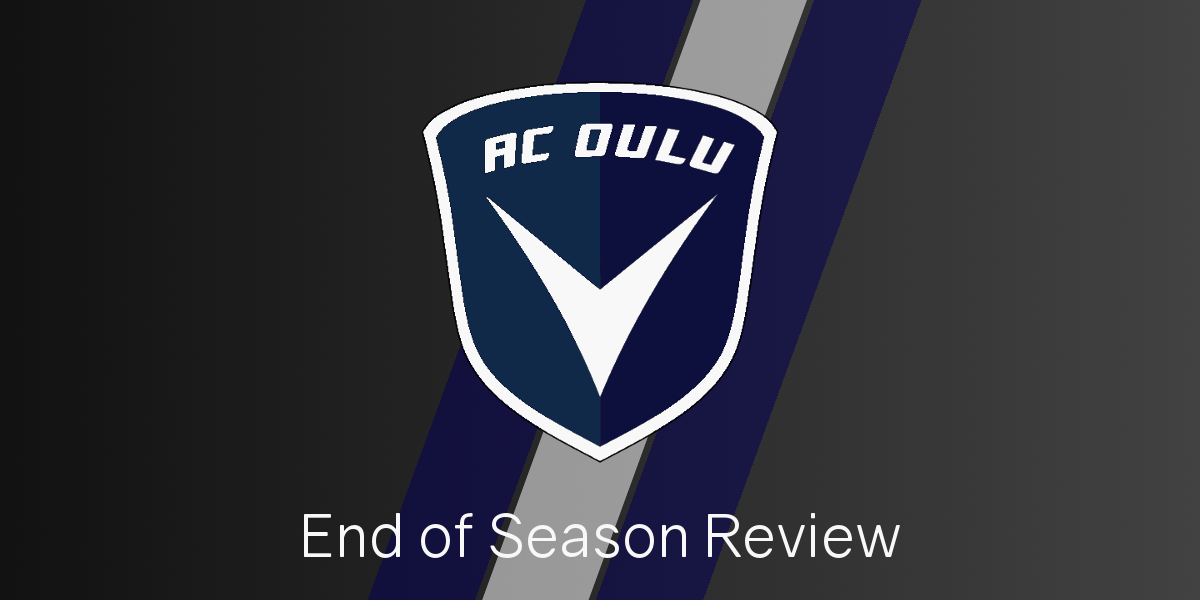 Today we will cover the last three months of a very significant season for us as we triumphed in winning the Finnish domestic double. Back in May we went on to win the Suomen Cup in extra-time against Seinajoen, and on the final day of the Veikkausliiga campaign we won the league title with a draw against the same opponents.

Our August began with a narrow loss to Kuopion Palloseura away from home as Arttu Hoskonen put one in his own net. This month was made worse by the shameful loss to 10th placed Seinajoen as Aristote Mboma scored a last minute winner for the hosts to really put out league position into question. However, we came back from the two losses with three wins on the bounce as Joni Makela netted a hat-trick versus Vaasan, followed by victories against FC Ilves and FF Jaro.

September was a month of all-sorts as we lost our first game against our eventual only title contenders International Turku at the Kupittaan. This was followed up by a visit to Helsinki's Toolon home ground and Jorge Cabezas helped us edge a 1-1 draw against the preseason title favourites. A victory finished of September as we won 2-0 against Lahti which helped us strengthen our position at the top.

In October, a 20-minute burst of four goals against Rovaniemen Palloseura helped us along to a 4-3 win away from home and set up the final day with one hand on the title for us. Seinajoen could have done with a lot less stress in attaining the needed result, but thankfully a draw put the title firmly in our hands as we held it aloft at Raatin Stadion. 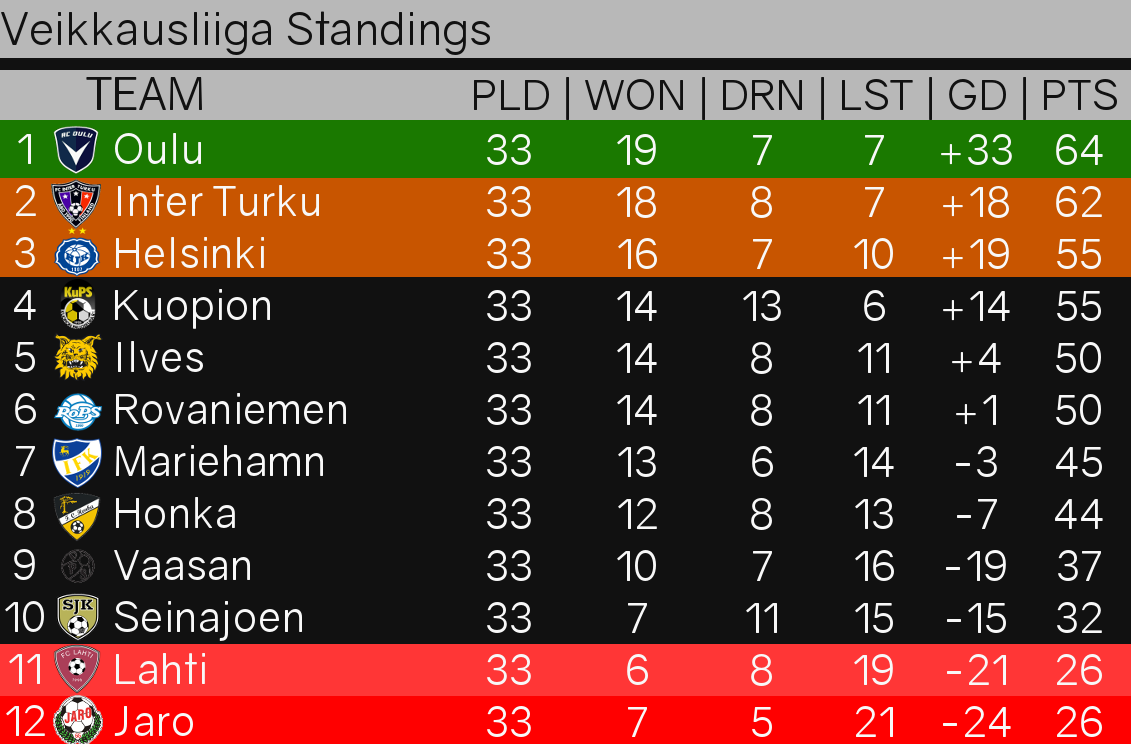 The eventual league title looked like this. Our points total didn't quite reach the level of recent years such as Helsinki's 73 points in 2018 or Kuopion's 69 points in 2019, but the fact remains that despite being dubbed relegation favourites at the beginning of the season we won the title by a two-point margin as the preseason favourites slid further down the table.

Helsinki were the preseason favourites, but still finished nine points behind us come the end of the season. Similarly, the title holders Kuopion also finished level on points with Helsinki despite high expectations. 2019 runners-up Seinajoen had a terrible season and almost faced relegation although they reached the final of the Suomen Cup, which they lost against us.

Our victory in the Suomen Cup means that 4th place qualifies for the Europa League. This means next season International Turku, Helsinki and Kuopion will all be playing European football in 2021. We will be playing with the big boys in the Champions League next season and will be the only Finnish club to be doing so.

At the bottom end of the table, it was FF Jaro who have yo-yo'd back down into the Ykkonen as they finished six points from safety and four goals away from achieving the relegation play-off spot. FC Lahti also lost their relegation play-off against Ekenas Tammisaari which means they will follow Jaro down into the second tier. JJK Jyvaskyla will return to the Veikkausliiga in 2021 for the first time since 2017, with Ekenas following them into the top-flight. 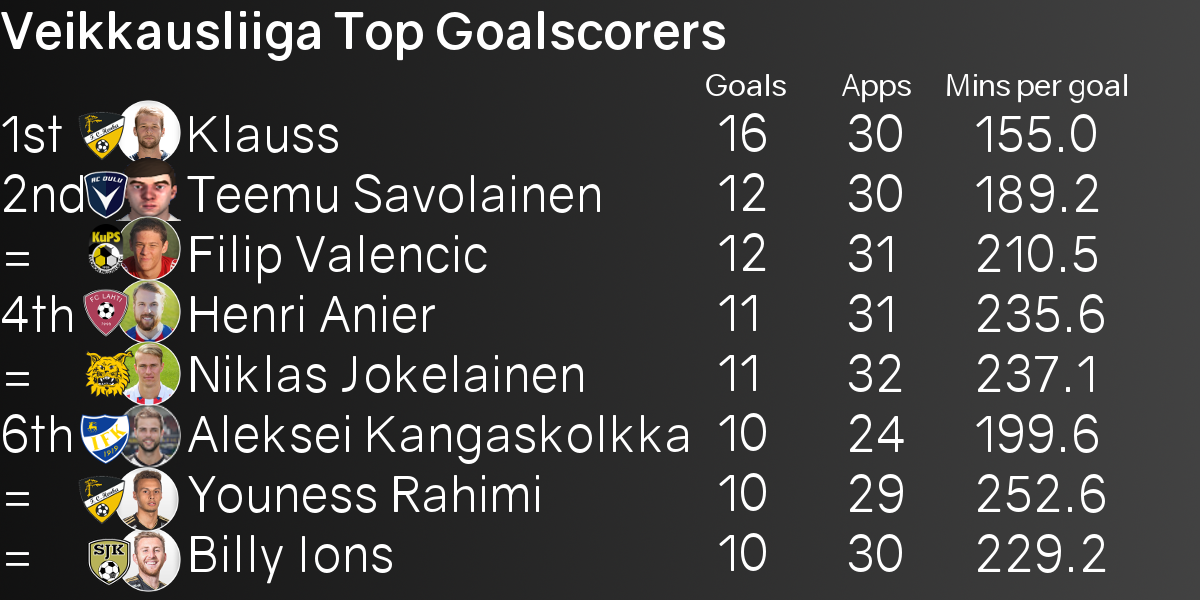 In 2020, it was Honka Espoo's Brazilian striker Klauss who ran away with the Veikkausliiga top goalscorer award, finishing four goals ahead of the next best. With four braces over the course of the thirty games he played in this term, he finished the season on 16 goals. Our very own Teemu Savolainen finished runner-up to the award.

In terms of the best goals-per-minute ratio, Klauss and Savolainen remained in their respective positions, however, IFK Mariehamn's fan favourite Aleksei Kangaskolkka came in third position after only appearing 24 times for his club over the course of the season and scoring ten goals in the process, giving him an MPG ratio of a goal every 200 minutes. 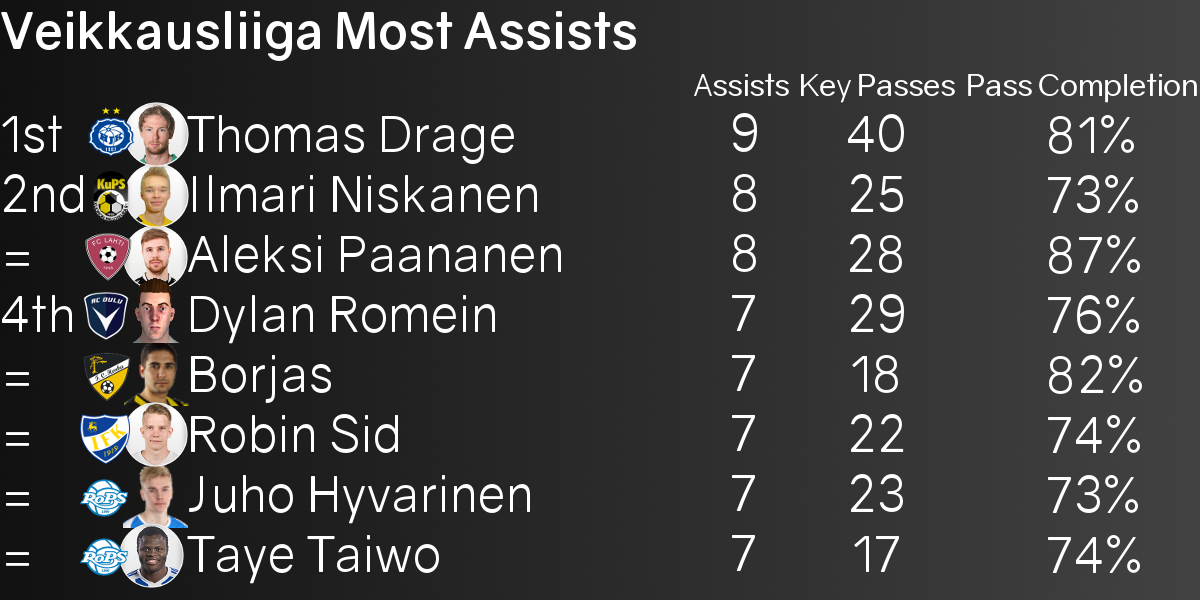 In terms of goal creators, Helsinki's star midfielder Thomas Drage ran away with the award with 9 assists and an 81% pass completion rate. Oulu's only entrance into this award was Dylan Romein's fourth-place finish with seven assists throughout the season, with the Australian winger creating 26 key chances over the title-winning season. 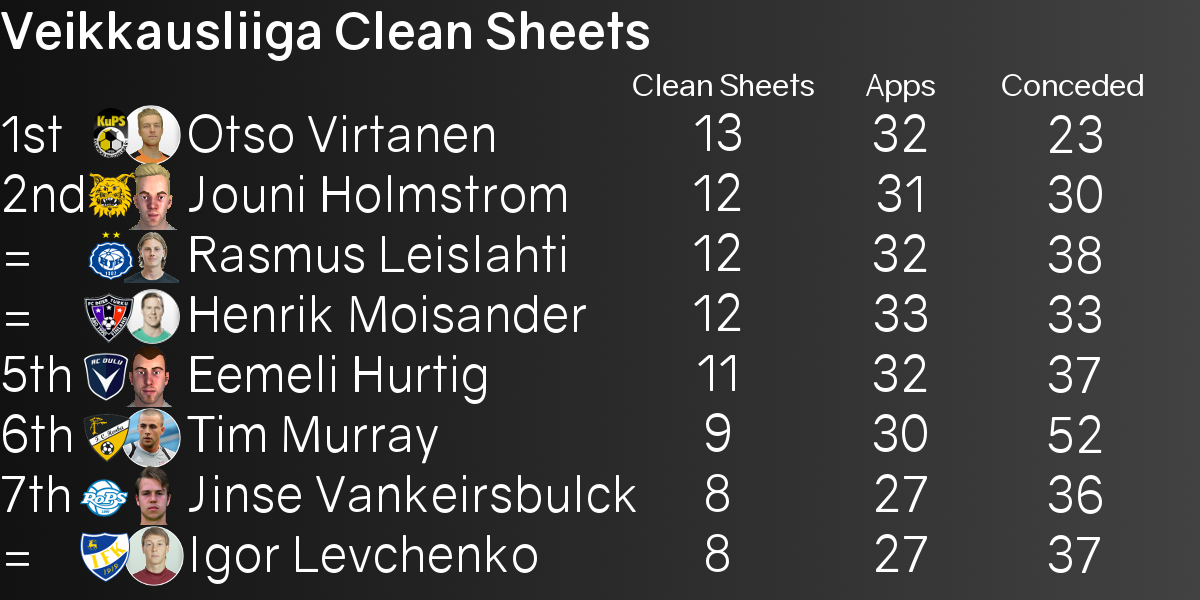 When it comes to clean sheets, it was Kuopion's Otso Virtanen who won the golden glove with 13 clean sheets for his side in 2020. Virtanen only conceded 23 goals out of his 32 appearances this term which proves his case of being one of the Veikkausliiga's best goalkeepers. Our own academy graduate Eemeli Hurtig finished 5th place in this list. I was extremely impressed with the 18-year-old this season though, as he was thrown into the first-team without any warning that he was to become our number 1 this season following Matt Jones' release at end of 2019.
Login to Quote

ScottT
3 years
An incredible season at the club that the fans, players and manager will never forget. Hopefully you’ll be able to retain it next season and cement a dynasty. 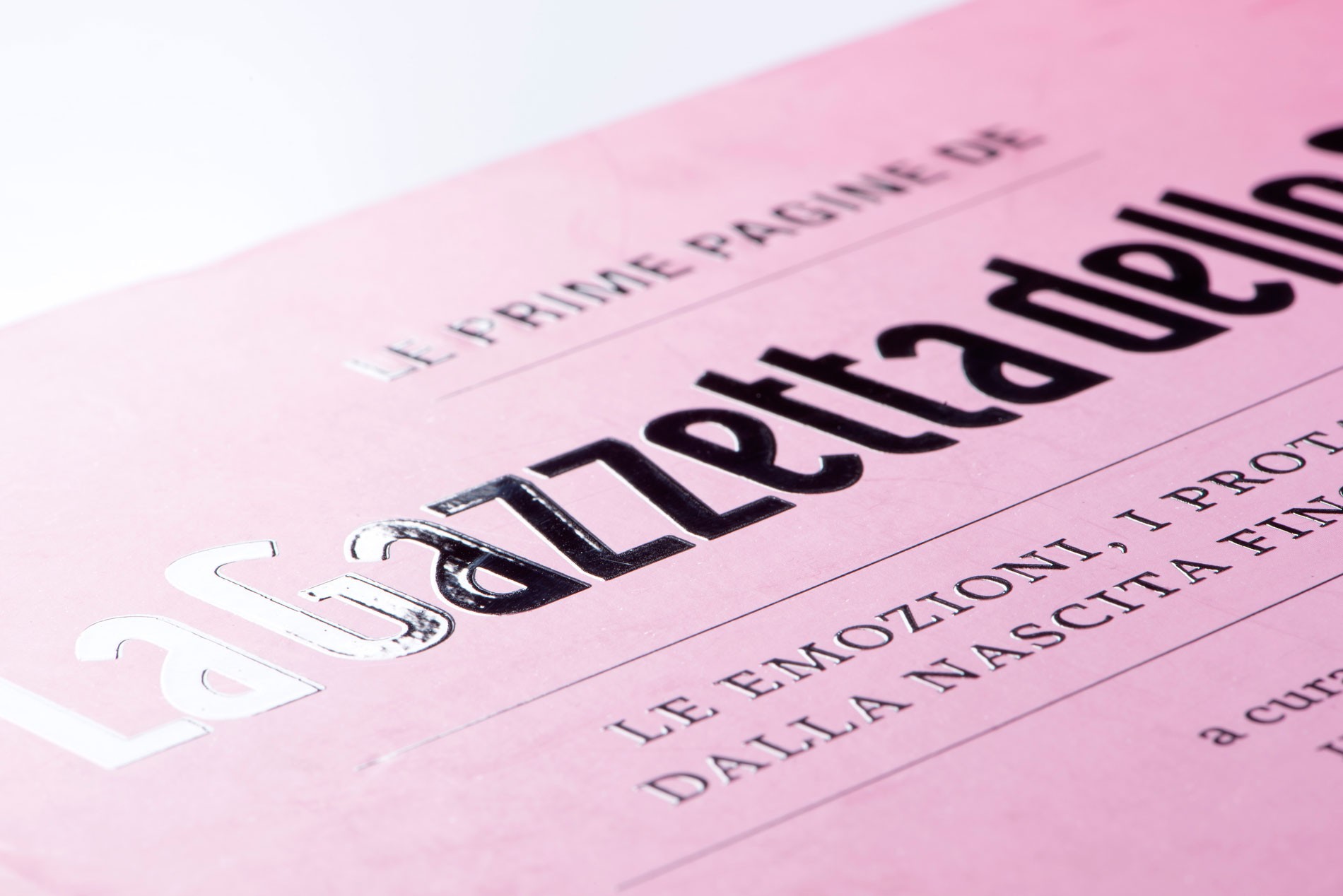 The bids have said to be in the region of £250,000 and £375,000 but sources near to the Oulu manager Aapo Virtanen have stated that the Finnish champions want seven figures for the Colombia Under-21 international attacking midfielder.

Cabezas joined Oulu on a free transfer from Boyaca Chico as an 18-year-old back in 2019 as part of the arrivals that came as part of the restructuring at the club following the clubs 2018 promotion to the top-flight. In his two full seasons at the club he has made 54 appearances and scored 12 goals under Virtanen's leadership.

Sources close to Cabezas' agent José Luis García have reported that the youngster wants to leave Oulu on the back of Roma's interest, with the prospect of playing in one of the world's most reputable leagues in Serie A at one of the country's top clubs a major attraction for the player.

The sources also state that Oulu manager Virtanen understands Cabezas' desire to play for a much bigger club, but wants to make sure that his club get the best deal possible for a player who has been a constant starter in his teams ever since his 2019 arrival. It is understood that AC Milan have been sniffing around Cabezas, so if Roma don't pay up then Virtanen must negotiate with Maurizio Sarri and his transfer team.
Login to Quote

Justice
3 years
It'd take a monumental bid to dislodge him from the club, surely. Either way Oulu will win; keep a fantastic player or earn money which could be reinvested into the squad well.
Login to Quote

ScottT
3 years
His head will more than certainly be turned by such a big club like Roma, however getting the best deal is important and hopefully you'll be able to achieve something that all parties are happy with at the end of negotiations.
Login to Quote

Jack
3 years
Justice: A monumental bid in terms of Finnish football is pretty much anything over the sum of £1million, considering the biggest fee ever involved with a Finnish club is £1.5million for Teemu Pukki in 2012

Scott: Inevitably, we'll lose out on Cabezas if Roma persist with bids and its no benefit to me having such an unhappy player in the club, however, a million pound plus deal is of great benefit to the club.

Griffin: He's been a fantastic asset quite clearly and it's no wonder to me why he's getting so much interest, really is a great player

Griffo
3 years
Jack, did you have to do anything in particular to set this save up?

How have you found the talent in the region?
Login to Quote

How have you found the talent in the region?


I haven't done anything in particular in the pre-game editor to set up the save, no it's just simply how you'd start any other save.
Since almost all of Scandinavia have such small league structures - particularly in Finland - there are no more than 16 teams in one division with Norway's Eliteserien having the biggest league, it's not too tricky to find talent in Scandinavia with having so few clubs to scout. However, a problem with this is that naturally the quality of talent in this part of the world isn't as good when compared with other obvious nations so I'm left scouring Africa and South America for young, more technical talent like Cabezas.
Login to Quote 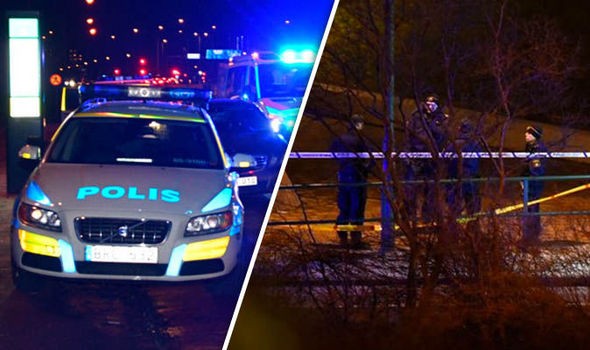 Both Finnish and Swedish authorities are investigating the mysterious discovery of a dead body on the east coast of the Swedish town of Umea. The origin of the body is currently unknown whether it came from Sweden or Finland and both of the nations are pleading to the public for more information regarding the death of the male, which authorities are describing as white, black-haired, aged between 20 and 30 years old and 6'2" tall.

Naturally, the police are treating the situation as suspicious and are unsure whether the death was murder or suicide. The pathologists working with the emergency services on this case say there is no cuts or wounds on the body and are saying the cause of death is either drowning or freezing to death. If it turns out to be the latter, experts say that it is likely that the victim could have died at least five months before the discovery this afternoon.

Umea Police Commissioner Gunnar Appelgren made a statement at around 4 o'clock this afternoon, two hours after the discovery of the body: "At approximately 2:30pm we received an emergency phone call about a body found on the port of Umea. We have provided a description of the male discovered on our website and to news outlets and we are asking any members of the public to come forward with information that could help our investigation."

The scene is being linked back to many unsolved missing persons cases over the past two years in both Finland and Sweden, but perhaps the most convincing explanation that was sourced online has been the disappearance of 26-year-old Finnish national Niilo Makinen whose family and friends reported missing in December 2019.

Friends of Makinen reported that he had become under threat by local gangs in the Oulu area of Finland which have its own links leading back to Helsinki and the wider scale of Scandinavia. Local Oulu police have stated that they are considering this scenario and that the possibility of this is currently under investigation but nothing will be made public until they have definitive proof that this is the situation.
Login to Quote

ScottT
3 years
Fantastic update. I'm keen to see what comes of this dramatic news. I have a feeling that this definitely could be linked to the gang that we learnt about earlier on in the story. Can't wait for more!
Login to Quote

Jack
3 years
Scott: Thanks mate, may just be linked, who knows?!

Griffin: One for the authorities for sure