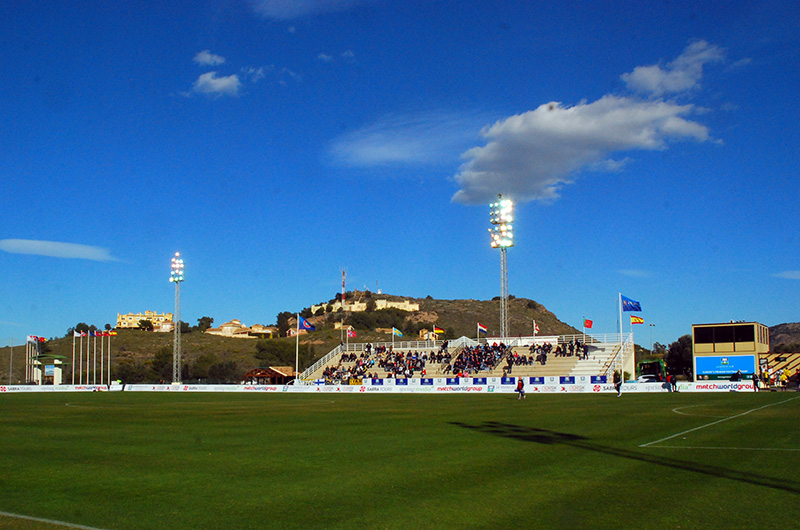 3/7/2018: There I was, stood on the touchline of the La Manga Resort football pitch, giving out final orders to the U18 Academy team. From my first day at the resort i made it known that i preferred the managerial side of the game over the actual playing. Luckily, a man called Pablo gave me a chance.

I spent the first 3 weeks of my 4 week "holiday" as Pablo's Assistant. I would set up the drills, get to know the team and work on improving my tactical nous with Pablo himself. By the 3rd week we had a starting XI, tactics and a good dressing room atmosphere.

We would be facing Club La Santa, arguably the most recognisable sport resort in the Canary Islands, in a annual "Friendly Game". Pablo and i both recognised how tough of a challenge this would be. Our team, although very harmonious between one another, was overall a poor team. we set up or tactics to sit back and hope to nick a goal or two on the counter.

The day arrived. Nerves were setting in but i worked on keeping the team calm and ran through the pre match warm-ups, as I waited for Pedro to turn up, but he never did...
Login to Quote

SonOfAnarchy
1 year
This look interesting, going to keep up with this. Goodluck.
Login to Quote

ScottT
1 year
An intriguing start. I look forward to seeing the progression of this story and what happens as this character realises he is going alone without the aid of Pablo. Good luck!
Login to Quote

TomLittle7890
1 year
That was when i was called into the Main Reception. There was a phone call for me, from Pablo. He'd been involved in an accident in the early hours of the morning and wouldn't make the game. The final words before the call ended will stick with me forever:

When I got back to the team, I faced a barrage of questions from the lads about Pablo's situation. I decided to not tell the team about what happened. All i did was relax the boys and give them their final instructions: Sit back with two banks of 4, and on the counter spread the play to our two best players: Hugo Vallejo and Juan Cruz

The First Half was horrible: Our fullbacks were way too slow and our defence decided to employ an offside trap that they couldn't hold. It was a minor miracle that we had kept them out up to this point. Something had to change, and now

When the lads were all sat down, I let rip. I told them in no uncertain terms how poor their performance was, and set about changing a few things around. Then, in a moment of thought, i told them about Pablo, and his Situation. That got a reaction out of the boys

We went on to record an Unprecedented 2-0 victory in front of the 800 fans. I thought that would be the end of my Managerial Spell in Spain. Little did I know, it was just the beginning
Login to Quote

TomLittle7890
1 year
After Celebrating the victory with the lads, the camp secretary called me in to the meeting room, someone wanted to talk to me.

I waited for 5 minutes, wondering who'd want to speak to me. Had I done anything wrong?

My thoughts were interrupted moments later by the large wooden door opening, and twomen: one in traditional Qatari robes and one in a slick suit. They introduced themselves as Sheikh Abdullah Al Thani and Jose Luis Caminero. The Chairman and Director of Football at Malaga CF.

The conversation was a blur, but i can remember them mentioning how they wanted a manager who was young and would stay at the club to build a dynasty, and how they wanted someone who would be willing to grow young talent rather than signing recognisable names on large wages.

This was my opportunity, at 19 years old, to leave a mark on the footballing world.
Login to Quote

ScottT
1 year
At the age of nineteen, he is extremely young, but it's a huge opportunity. Looking forward to how this develops!
Login to Quote

You are reading "Málaga CF : Reviving a Fallen Underdog".