ScottT
1 year
An astonishing achievement and the pinnacle of all the hard work put in by Bjorn since arriving at the club. Let the celebrations commence and more importantly, let the club turn semi-professional!

Lewys96
1 year
At the start of the season; Gällivare Malmbergets FF were 1000-1 odds to win this years league title. Yet, here they are at the end of the season; champions, and going into the Swedish First Division for the first time in the clubs history. Björn new that he had just worked a miracle getting his side not only promoted, but winning the league title. His stock was high; he'd already turned down multiple offers from other clubs throughout the season. Gerd Siverhall was at the game; he was never going to miss the biggest game in the clubs history. He new that'd he come and see the team during their celebrations post-match, and that was where he was going to make his demands. As Gerd Siverhall was making his way down the tunnel and towards the away dressing room, he could already here the chants of "Championes, Championes,Ole! Ole! Ole! ringing through the tunnel. As he entered the room, amidst all the celebration and the champagne spraying everywhere, one man was not joining in. He could see Björn standing there on his own out of the way of the celebrations

G. Siverhall "Congratulations Björn. This season has been incredible from start to finish, and we owe this success to you. Without you we would have been languishing in the league below".

B. Johansson "Very few believed that this was possible. Me; I thought we had an outside chance. The team is much better run than it was before, so that gave us an advantage straight away. Next season is not going to be easy though. If we do not improve then we are going to be sent packing from that league with our tails between our legs. You know what he have to do to be competitive in that league don't you Gerd".

G. Siverhall "Yes, and I'm sure that you'll be happy to here that it's happening. As of December the 12th 2019 the club shall officially be operating at a semi-professional capacity. You got what you wanted; I know there's been a lot of clubs sniffing around you. I hope this goes towards what you're wanting. You can take this club from nothing and turn it into something really special. The last 18 months go to prove that".

B. Johansson "Finally! The man has seen sense. Its no secret that other clubs have tried to speak to me since we had that disagreement, but I refused them all straight away. Thank you for finally allowing us to take that next step. When it does come into place though, I would like us to sit down and renegotiate a more suitable contract for myself and my coaching staff".

G. Siverhall "Yes I was already going to arrange that with you. We shall open talks as soon as it comes into place. Until then though, enjoy the success that you've brought us this season".

This was no time to simply sit back and enjoy what he had just achieved with this squad. Already in Björn's head he was planning for the new season. He already new which players to cut and which ones were capable of making the step-up with him. He wouldn't accept another dog fight to just survive in a division. If Östersunds can gain back to back promotions into the Swedish Elite first division, then why can't he and Gällivare do so as well.
Login to Quote

Lewys96
1 year
ScottT - They've finally given into the demands!
Login to Quote

TheLFCFan
1 year
Champions!! What an achievement! Very well done mate, taking them from relegation threatened to the league winners is excellent. The news that you will become semi-pro only adds to that and now Bjorn can take this club to even further levels!
Login to Quote

Lewys96
1 year
TheLFCFan - Cheers mate; hell of a turn around in 18 months. Finally moving to semi-pro will make it easier to attract players
Login to Quote

ScottT
1 year
The decision to become a semi-professional side will entail more financial risks, but in the grand scheme of things it should prove to be a decision which will be worth it, in the end. Delighted to see this decision has been made by Gerd.
Login to Quote

Jack
1 year
Champions and rightly moving up to semi-professional! What a time for Bjorn!
Login to Quote

After a hugely successful 2019 campaign which saw Gällivare Malmbergets FF run out as champions of their respective league; the clubs end of season awards looked like this. The clubs top goalscorer Felix Söderström was voted the fans player of the year for this year with 62% of the votes. Captain fantastic Mac Chahrour's strike against Hudiksvalls FF was voted the clubs goal of the season. Defensive midfielder Piero De Luca was voted the clubs best newcomer. Finally; Felix Söderström claimed the clubs young player of the year award. That brings the curtain down on Björn Johansson's first full season in charge of Gällivare Malmbergets FF. 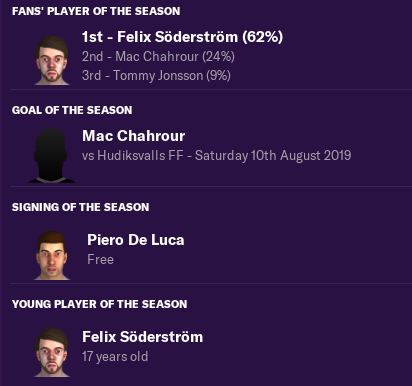 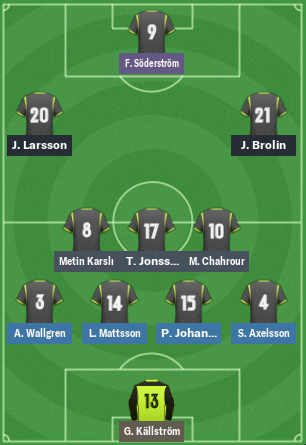 Gällivare Malmbergets FF Released List:
Following their title winning campaign, Gällivare have announced that the following players have left the club are their contracts were terminated. Club chairman Gerd Siverhall and Björn Johansson released the following joint statement.
"We would like to thank you for the hard work and dedication that you contributed towards the team which led to this hugely successful season. Without your hard work, this season would not have been possible. However; most of you did not play the amount of football that you would be expecting to play at this stage of your career, alongside the step-up in quality, we therefore took the decision to release the following players from their contracts. From all of us here at Gällivare Malmbergets FF, we wish you all the best of luck in your future ventures, and hope that you find success in whatever route that you go down".
The released list in full:
Adam Gustavsson - 18 Yeaar Old Striker
Jonathan Sköld - 18 Year Old Goalkeeper
Haris Mohlin - 18 Year Old Central Midfielder
Martin Jönsson - 18 Year Old Left Back
Gustav Karlberg - 18 Year Old Right Winger
Roland Ekström - 17 Year Old Left Winger
Jim Malmqvist - 17 Year Old Central Defender
Joakim Rosenberg - 18 Year Old Central Defender
Login to Quote

Lewys96
1 year
ScottT - Hopefully the financial risk will be outweighed by the teams development. It had to happen for the team to take that next step!

Jack - A crazy 18 months for the man in charge. Hopefully this will be the start of something special for the club!
Login to Quote

ScottT
1 year
Everyone associated with the club has played their part. Looking forward to the future now!
Login to Quote

For those of you that haven't seen the film or read the book; moneyball is a concept that was originally developed within baseball. It involved taking a new approach to the way teams scouted players. Where some players might be overlooked because of how they ran, threw, or just the way they appeared; moneyball's aim was to overlook all of that and judge players based purely on their statistics. There's a quote within the film that can be related to Gällivare Malmbergets FF. Brad Pitt who plays Billy Beane the General Manager of Oakland Athletics says at one point "There are rich teams and there are poor teams. Then, there's 50 feet of crap. And then there's us." and that is the exact same boat that Björn Johansson and his team currently find themselves in. Even after the step-up in stature and the added incentive of financial gain on offer at the club, they're still struggling to attract players. You'd think that turning semi-professional would have helped the club attract the higher calibre of player that they have been so desperate for. Yet, there are still very few willing to join the club. As it stands, the club has only been able to make two first team additions since the window opened almost a month ago. They have managed to sign goalkeeper Gustav Norin formally of IFK Östersund who Gällivare beat on the final day of last season to secure the league title. The club has also managed to secure the services of central midfielder Niclas Bönström on a free transfer Härnösands FF. The club is currently looking to add two new central defenders, two new fullbacks, two wingers, and a striker to the first team before the window closes. Luckily for Björn and Gällivare, there's still a few months before the deadline closes.
Login to Quote

ScottT
1 year
The moneyball strategy is something I'm familiar with. It's becoming more common in the UK, with the likes of Brentford associating themselves with it. As seen at Brentford, it can reap some huge rewards financially and really help build towards the future of the football club. However, there's a risk factor with it and that has to be managed carefully. I'm looking forward to seeing how it affects the business conducted, given your issues in attracting players despite becoming semi-professional.
Login to Quote

TheLFCFan
1 year
This new approach will certainly be interesting to see how it pays off. The positives are very high and could lead to some high rewards, however, if it goes wrong the negatives and consequences could be disastrous. Hopefully, it is one that reaps rewards for Bjorn.
Login to Quote

Jack
1 year
Moneyball is a system that I feel is a necessity to some extent with less cash-rich teams and clubs with lower reputations like Gallivare. I am in favour of this approach

You are reading "Gällivare Malmbergets FF - Swede Dreams Are Made Of This".