Zed
4 months
Two matches, zero defeats against RBL. That's how I like to see it

TheLFCFan
4 months
A much much better month here, time to kick on and rise up the table!
Login to Quote

OneMoreGame
4 months
Superb results in the cup against Lepizig and against Bayer in the league. Next month allows you to put your efforts in the league facing less tougher opponents! EL is too easy for you, hoping for a good draw.
Login to Quote

Starting off with a victory over SC Freiburg courtesy of a late goal from Kasper Dolberg, 1860 Munich would then give up a one goal lead to lose to Schalke 04 after a poor second half. Continuing their great form in the UEFA Europa League, Die Löwen put together a dominant display against FK Partizan with 1860 Munich centre back Svetozar Markovic once again missing the game against his former club due to injury.

In the final two matches of the calendar year, 1860 Munich faced the bottom two sides in the Bundesliga, playing out a bore draw against Hamburger SV in a disappointing display and then comfortably defeating Erzgebirge Aue. 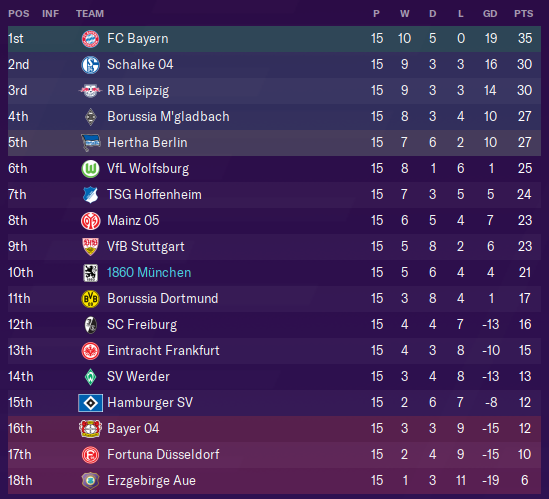 Bayern Munich continue to lead the Bundesliga with Schalke 04 putting together a good month to move into equal second alongside RB Leipzig. At the bottom of the table, Bayer Leverkusen continue to struggle, finding themselves in the relegation zone.

1860 Munich finish the group stage undefeated having only conceded one goal in six matches. They will now wait for the First Knockout Round to be completed which is set to be played in the final two weeks of February before continuing in the competition in the Second Round Knockout phase in March. 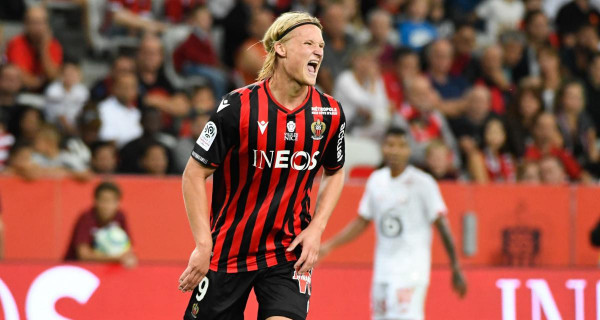 Scoring three goals from four games in December, Kasper Dolberg has turned around his poor form to start the season to being one of the first names on the team sheet. The Danish international is currently the equal second highest goal scorer in the Bundesliga alongside his teammate Robin Hack.

After the winter break, 1860 Munich take on two sides just above them on the Bundesliga table in TSG Hoffenheim and VfB Stuttgart. In their last match of the month, Die Löwen face league leaders and bitter rivals Bayern Munich.

ScottT, tedbro20 & TheLFCFan: We have started to turn the corner but still not performing to the level we should be in the league.

Tango & Zed: I am going to have to learn to hate RB Leipzig more.

J_ames: We certainly are the resident experts at drawing matches.

Jack & OneMoreGame: Our performance in Europe has been literally perfect.
Login to Quote

tedbro20
4 months
Another month picking up more points. Going to be a big January and ifnyoubcan find that one signing to get you up the table to where you deserve to be
Login to Quote

Tango
4 months
Well, if you keep getting some 7 points out of 12 each month, the other teams will start to wobble. Consistency is key here
Login to Quote

ScottT
4 months
Markovic absent for the Partizan game again?! That's tough luck. A decent month all-in-all but I know that Bierofka will be wanting more.
Login to Quote

OneMoreGame
4 months
A lot better month now, if the lost against Schalke was avoided it would have been perfect! Finding your form slowly but you're not so far away from the eurpean places.
Login to Quote

J_ames
4 months
I find it awfully suspicious that Markovic was unavailable for both Partizan games! I say fine him 2 weeks wages for being a dodgy so-and-so.

Another mixed month of results in the league, but your progress in Europe is McDonald-esque. Great to see Dolberg hit the back of the net a few times, hopefully he's now adjusted to the league and is ready to win the Golden Boot!
Login to Quote

TheLFCFan
4 months
Excellent to see that Dolberg is finally settling in.The league is continuing to look a lot better and the Europa League has been perfect so far. I think 2024 is going to be a great year!
Login to Quote

Jack
4 months
Dear me, Dortmund and Leverkusen are not having a good time at all. In Europe, though you are smashing it!
Login to Quote

1860 Munich performed well in January, putting together an undefeated for the third time this season. Lisandru Tramoni came off the bench and scored late in the game to seal a draw against TSG Hoffenheim followed by a comfortable victory over VfB Stuttgart after goals from Robin Hack and Kasper Dolberg.

The month finished with the Munich derby against an undefeated Bayern Munich in front of 75,000 fans. It was a back and forth battle between the two sides with Philippe Coutinho scoring in the 84th minute only for a deflection from an Efkan Bekiroglu shot to find its way in the back of the net just one minute later for 1860 Munich to seal a draw. 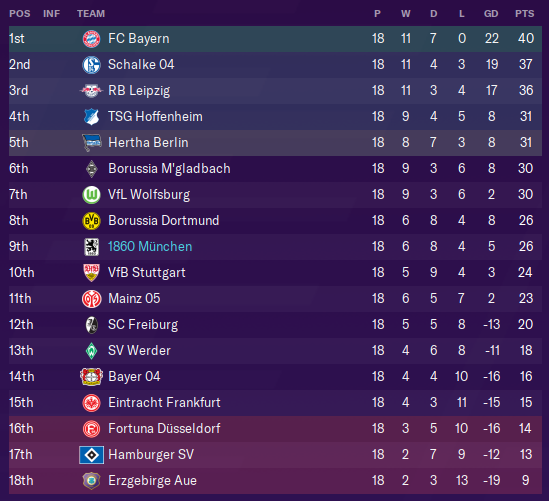 Still undefeated, Bayern Munich lead the competition with Schalke 04 and RB Leipzig close behind while Erzgebirge Aue look to be the first relegation candidate, having been in last place for the past three months. 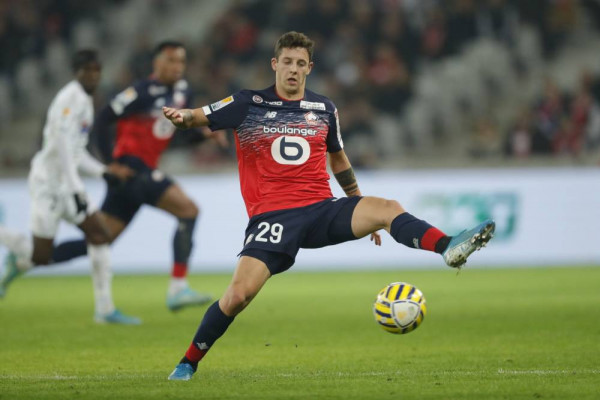 Making vital tackles and interceptions throughout the month, Domagoj Bradaric has found his feet at 1860 Munich. After an injury plagued first season with the club, the Croatian has already produced one more assist than his previous tally having currently played six less games.

February shapes up as an important month for 1860 Munich should they wish to make a push for the European places as they play four sides in the Bundesliga who are around them currently on the table.

1860 Munich also play a home fixture against Hamburger SV in the DFB-Pokal third round in a competition that is wide open after the eliminations of Bayern Munich and RB Leipzig.

tedbro20: No funds available to bring in any players unfortunately.

Tango, OneMoreGame & TheLFCFan: The side still feels like it has a little bit more left in it, hopefully we can put together a nice run in the second half of the season.

ScottT & J_ames: I was so excited to have Markovic play against his former team but it clearly wasn't to be.

MidKnightDreary: Welcome to the forum, glad you enjoyed it!

Jack: Dortmund and Leverkusen have both struggled every season, I would love to have their resources.
Login to Quote

Tango
4 months
It looks a lot like the tale of Achilles and the turtle: you're catching up in an overwhelmingly slow pace and it seems that you're never gonna get'em

You're short of 5 points to the European spots, and considering that the UCL spot is also 5 points away, you can totally go for it
Login to Quote

Jack
4 months
Yourselves and Dortmund have made a good and certainly necessary comeback over the past couple of months. That Bayern draw was great but turning points like against Hoffenheim into wins is what is going to really turn this season on its head - especially with a fair few upcoming games in February.
Login to Quote