Imagine
6 months
Good start to the season Griffo, nice link up with Leverkusen too!
1
Login to Quote

It was a mixed bag of results for 1860 Munich in October, starting with a 1-0 victory thanks to a 54th minute goal from Osei Owusu. FC Wurzbuger Kickers were next up in a top of the table clash, with the Die Rothosen proving far too strong in a match which saw 1860 Munich fail to even get a shot on target.

To finish the month, a thrilling match against 1. FC Kaiserslautern which saw 1860 Munich go up 2-0 only to have to settle for their first draw in the 3. Liga season. 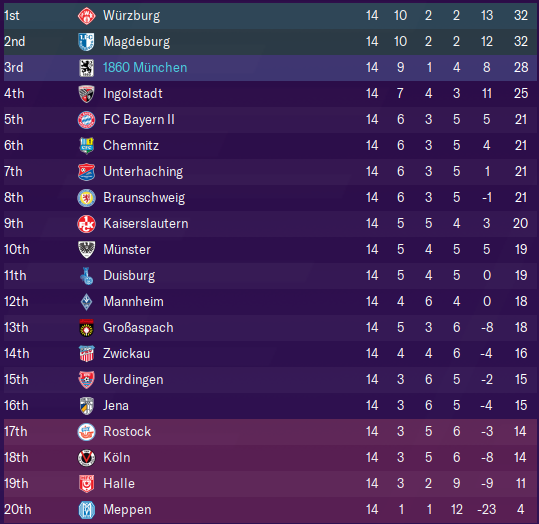 For the first time this season. 1860 Munich find themselves out of first position after a relatively poor month of results. Led by 3. Liga top goalscorer Dominic Baumann, FC Wurzburger Kickers share the top position with 1. FC Magdeburg. 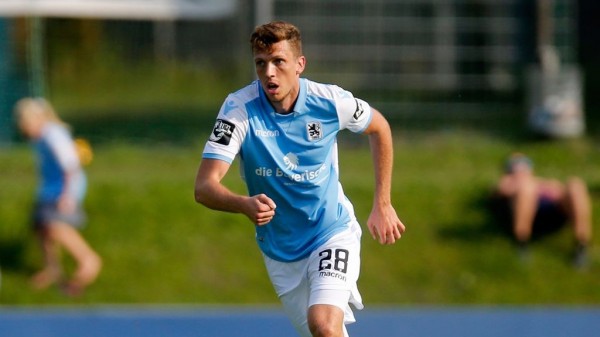 After a poor start to the season, right back Herbert Paul has managed to find a rich vein of form to be named 1860 Munich’s player of the month for October, proving vital in the clubs defensive efforts.

After picking up an ankle injury last month, the 19-year-old Greilinger has now suffered a calf injury which will see him miss one to two weeks of action.

Currently dealing with a reoccurring hip complaint, Stefan Lex is not far from returning from injury, expecting to be available for selection in the fixture against MSV Duisburg.

ScottT: Our form has certainly dropped a little bit since the start of the season, hoping we can be more consistent once we get through the large number of injuries we have had so far.

Imagine: Thanks, we are yet to take advantage of the partnership but that doesn't mean I haven't been looking
Login to Quote

ScottT
6 months
Unlucky. Hopefully you can bounce back next month with a stronger set of results.
1
Login to Quote

TheLFCFan
6 months
For the first time this season the injuries seem to have calmed down a bit, hopefully that will allow you a better selection and you can regain your place at the top.
1
Login to Quote

Tallery
6 months
Solid start to the season pal, being led by your talents I wouldn't be surprised to see a promotion headed your way

November saw an improvement in form for 1860 Munich, claiming eight points from four fixtures, starting with a 1-1 draw against rivals FC Bayern II.

Tim Gebhart and Osei Owusu led the way in the next two fixtures, to easily dismiss MSV Duisburg and SV Waldhof Mannheim before finishing the month with another 1-1 draw after a poor pass from captain Felix Weber saw Nick Proschwitz score a late equaliser for Eintracht Braunschweig. 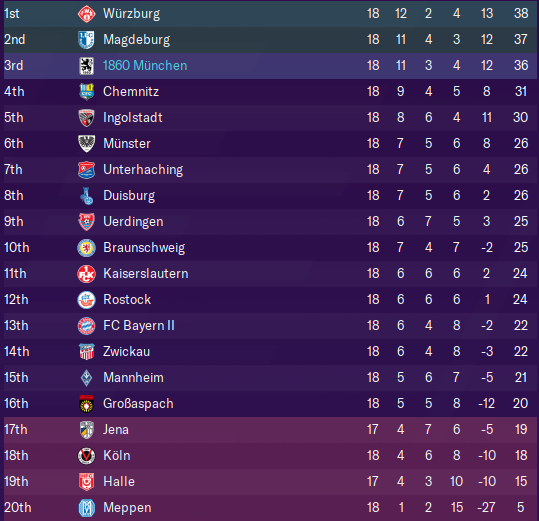 Despite an improvement in results, 1860 Munich remain in third position in 3. Liga, five points clear of Chemnitzer FC in fourth. FC Bayern II have fallen down the ladder after picking up just one point in their last five matches.

Continuing his incredible form this season, Owusu was once again named player of the month for not only 1860 Munich but also the 3. Liga competition.

Scoring four goals in the month, the Ghanaian has brought his tally to fifteen goals from eighteen appearances so far this season, while keeping club stalwart Sasha Molders out of the starting side for a large majority of the season.

A relatively easy month awaits 1860 Munich heading into the winter break of the German football season. Matches against FSC Zwickau and rivals SPVGG Unterhaching start the month before finishing with a fixture against last placed SV Meppen.

ScottT: We certainly did improve this month which was great to see

TheLFCFan: I am hoping that is the case, all injuries so far this season keep occurring to my starting eleven which has been quite frustrating

Tallery: You are too kind Tallery, welcome back to the forum
Login to Quote

Imagine
6 months
Nice unbeaten month there Griffo, hopefully another few wins can take you top. Osei Owusu is having a storming season isn't he?
1
Login to Quote

ScottT
6 months
A very pleasing month there. A decent gap between yourselves and Chemnitz and no injuries to tell us about! Onto December and hopefully Owusu can continue his excellent goalscoring form.
1
Login to Quote

TheLFCFan
6 months
With his form, Osei could be a tough man to keep a hold off come the transfer window. I hope, for your sake, this isn't the case as he seems to be mightly important to your promotion push.
1
Login to Quote 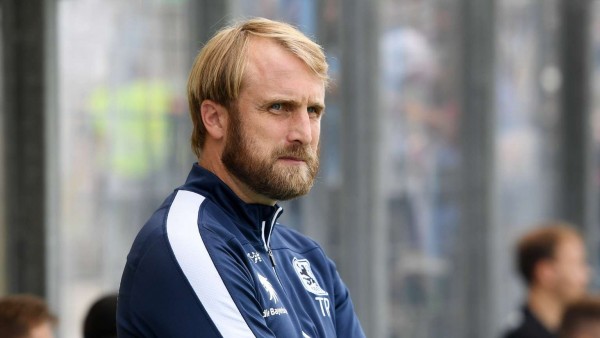 Under the guidance of Bierofka, 1860 Munich currently sit in third in 3. Liga
• Bierofka had five months remaining on contract prior to the extension
• During his playing career, the German left winger played 193 games for 1860 Munich
• The 40-year-old manager is set to earn €5,750 per week for the next two seasons

After a terrific start to the season, Daniel Bierofka has signed a new deal which will see the him with the club until June 2021. Bierofka had two reigns as interim manager of 1860 Munich, being promoted in April 2016 and November 2016 before being given the role on a permanent basis ahead of the 2017 season.

“Daniel has shown commitment to the club over a long period of time and the board are more than happy to reward him for his outstanding achievements so far this season.” said 1860 Munich President Niklas Volker. “We can only hope the club continues on its current path from here.” he added.

“I am delighted to extend my contract with the club, we have gotten off to a great start this season, but it is consistency which will be the key to us maintaining our current form and pushing for promotion to Bundesliga 2.” said Bierofka.

Die Löwen next face FC Zwickau on the 7th of December, playing two more matches before heading into the winter break of the German football season.

Imagine: Owusu has certainly found form, he is certainly an early contender for 3. Liga awards at the end of the season.

ScottT: That is the most important gap no doubt, I would rather avoid a playoff through obviously. Absolutely thrilled about injuries no longer being an issue.

TheLFCFan: Owusu is currently on loan with at our club from Bundesliga 2 side DSC Arminia Bielefeld, should I get promoted it would be interesting potentially having him playing against us next season.
Login to Quote

ScottT
6 months
A great way to show faith in your manager. Congratulations, Daniel.

TheLFCFan
6 months
Congrats on the new contract. Based off this season it is well deserved.
1
Login to Quote

1860 Munich finished the year with three straight victories, starting with a close victory over FSV Zwickau courtesy of an early goal from Osei Owusu.

Stefan Lex stole the show in the next two fixtures, scoring a brace against rivals SPVGG Unterhacing followed by another brace against last placed SV Meppen. 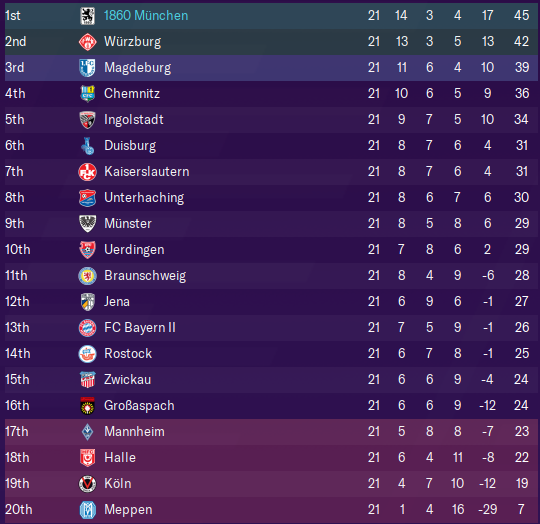 Maintaining their position at the top of the table, 1860 Munich sit three points ahead of FC Wurzburger Kickers in second. Chemnitzer FC have worked their way into fourth position, with the club currently unbeaten in their last eleven matches. 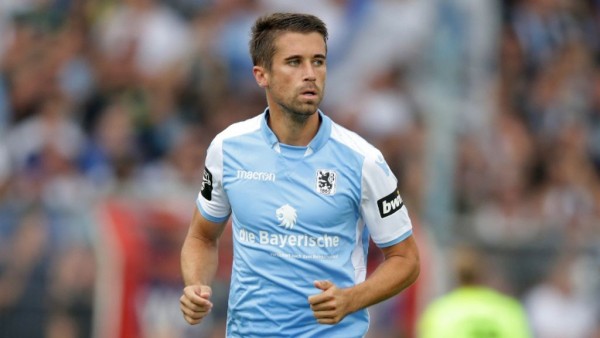 Since coming back from injury, Stefan Lex has added another dimension to the play of 1860 Munich. The right winger scored four goals and produced one assist in three matches across December to see him named 3. Liga player of the month.

After coming back from the winter break, 1860 Munich only have two fixtures in January. Starting with a home fixture against relegation candidate FC Viktoria Koln before then travelling to take on FC Ingolstadt 04.

TheLFCFan
6 months
Thats more like it! Three from three and back to the top of the table! Lex coming back from injury has seemed to help out and hopefully the squad will stay fit now!
1
Login to Quote