ScottT
1 year
The perfect way to conclude the year and head into the next. Top of the tree, injury-free and Lex on fire. Not bad at all.
1
Login to Quote 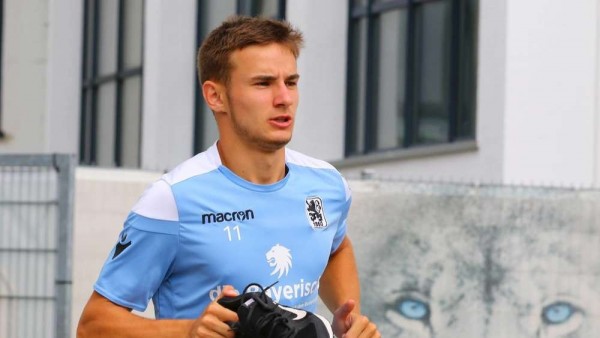 17-year-old centre back Niklas Lang is set to move from 1860 Munich to Bundesliga 2 promotion candidates Hamburger SV for €2.3 million. Lang has yet to make his debut for 1860 Munich, spending the season with 1860 Munich Under 19’s team so far this season.

“Lang is a very physically gifted and shows great determination, said Hamburger SV manager Dieter Hecking. “1860 Munich are known for their ability to produce talented players and I know that Niklas is no exception.” he added.

“I am looking forward to developing my skills at Hamburger SV and I am excited for the future.” said Lang. “The club has a great history and I hope to be a part of the squad that sees Hamburger SV return to the Bundesliga in the future.” he added.

The transfer could not come at a worse time for 1860 Munich with current starting centre back pairing Felix Weber (suspended) and Tim Rieder (injured) currently unavailable. Aaron Berzel and Semir Gracic are expected to start in their absence.

TheLFCFan: It isn't shown statistically but it just seems we are a much better side with Lex on the field

ScottT: Lex is on fire, your defence is terrified...
Login to Quote

Trotman9165
1 year
Great start mate, hopefully you can earn promotion. shame Lang has gone due to the injuries and suspension, but im sure you will cope and its a great deal for you financially
1
Login to Quote

ScottT
1 year
That's a huge boost financially nonetheless. The clause inserted within the deal could also prove to be a very wise decision, too.
1
Login to Quote

Two completely opposite matches took place in January in return from the winter break for Die Löwen. To start the month, they played out a frustrating bore draw against a FC Koln side currently in second last place on the 3. Liga table.

The second fixture in January produced a match of the year candidate with a 3-2 thriller against FC Ingolstadt. After going down 2-0 at halftime, 1860 Munich managed to equal the score before FC Ingolstadt defender Bjorn Paulsen was sent off and 1860 Munich captain Felix Weber scored his first goal of the year with one-minute left in injury time to steal the victory. 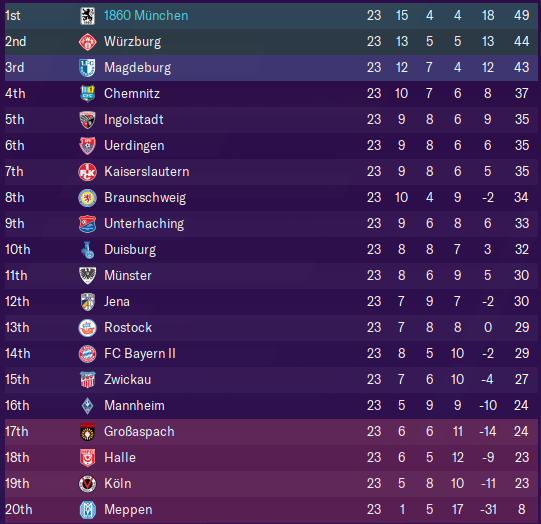 Holding a five point lead at the top of the table, 1860 Munich continue to defy expectations in 3. Liga, a sudden change in form would leave an opportunity for either FC Wurzburger Kickers or 1.FC Magdeburg.

At the bottom of the table, SV Meppen are almost certain to be relegated from the division despite fifteen games remaining in the season. 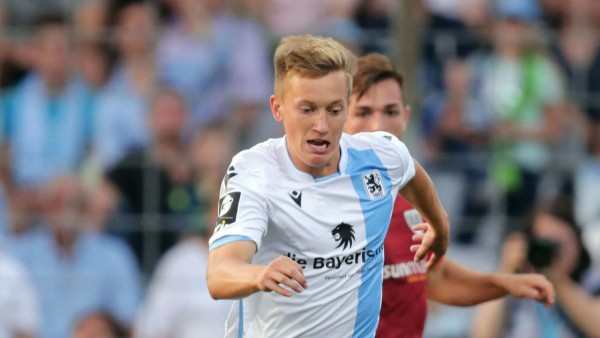 Starting the season in the first eleven due to an injury Nico Karger, the 19-year-old Fabian Greilinger has performed well above expectations, earning himself a regular place in the starting side, seeing Karger move to the bench.

The left winger has contributed with four goals and three assists so far this season using his outstanding pace and dribbling skills to leave opposition players in his wake.

After picking up a virus, Johann Ngounou Djayo has been sent home to be isolated from the squad and is expected to be unavailable for the next two weeks.

1860 Munich will be without Tim Rieder for two to three weeks after damaging his ankle during training before the match against FC Ingolstadt.

A return to a full schedule awaits 1860 Munich in February starting with a home fixture against lowly Hallescher FC before going on the road to take on KFC Uerdingen 05 and FC Carl Zeiss Jena.

The last match of the month could be a crucial one in terms of final positions on the 3. Liga table when 1860 Munich take on third placed 1.FC Magdeburg.

Trotman9165: The timing literally couldn't have been worse, it will have to be a bit of short term pain for a long term gain

ScottT: The clause was what allowed me to make the deal, knowing that if he did develop I would reap the benefits in the long run as well
Login to Quote

ScottT
1 year
The stuff of champions! To come back from 2-0 down to win against very respectable opposition in Ingolstadt requires character and real quality.
1
Login to Quote

Trotman9165
1 year
Nice little gap starting to take place at the top of the league.
1
Login to Quote

It was an incredible start to the February for 1860 Munich with a hattrick from Osei Owusu leading them to a dominant 5-1 victory over Hallescher FC before going on to also dismantle KFC Uerdingen 05.

The run of form went downhill from there, playing out a bore draw against FC Carl Zeiss Jena before suffering their first defeat in thirteen fixtures against promotion rivals 1. FC Magdeburg. 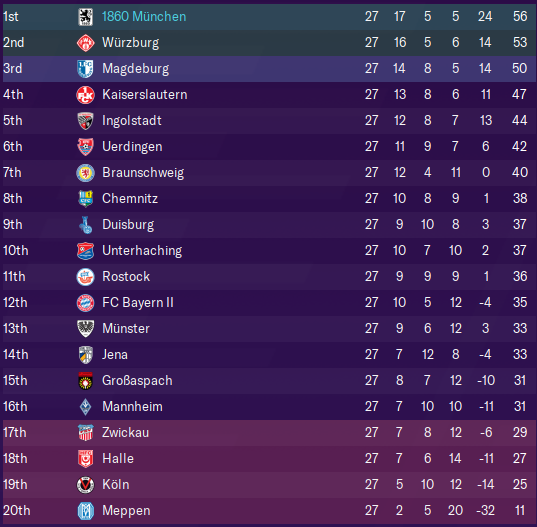 The top of the 3. Liga table has seen 1.FC Kaiserslautern move into promotion contention after winning their past four games straight, currently sitting in fourth. FC Ingolstadt also had an impressive month winning three of four matches. 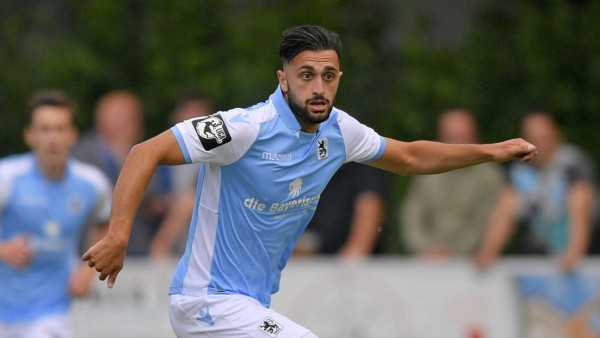 Ever-present this season, Efkan Bekiroglu is proving to be the most consistent player outside of Osei Owusu for 1860 Munich. Leading the 3. Liga in most key passes completed, the 24-year-old has controlled the midfield every time he is on the pitch.

19-year-old winger Fabian Greilinger suffered a foot injury in training which will see him miss the first match of the month against FC Hansa Rostock.

After suffering a hernia, Herbert Paul is expected to be out of action for the next one to two weeks.

A balanced month awaits 1860 Munich, facing four mid-table teams across March while promotion competitors FC Wurzburger Kickers and 1.FC Magdeburg face a relatively easy month of fixtures with both teams not facing a team in the top half of the table.

ScottT: At the time of the result I was happy but this was one result I look back on and realise just truly how great it was.

ScottT
1 year
A tough loss to Magdeburg. A victory in that game would have put you in a fantastic position, but you continue to set the pace at the moment. If you can continue to do what you need to do, there's no need to worry. Promotion looks to be on the cards for the time being.
1
Login to Quote


Head of Youth Development Manfred Paula has introduced a new group of talented youngsters into the 1860 Munich set up, attracting players from all over the local region.

Tim Enke appears to be the best young prospect from the group, with a large number of clubs already in pursuit if the attacking midfielder.

A solid prospect, Ager currently does not fit into the 1860 Munich tactical set up. He will need to be adaptable should he want to progress further at the club.

Capable of playing multiple roles well in the midfield, 15-year-old Piller has strong physical attributes but still requires a bit more time focusing on the technical and mental side of his game.

ScottT: The match against Magdeburg was incredibly frustrating but I can't complain after going undefeated for so long
Login to Quote

TheLFCFan
1 year
A bit to catch up on as I was away.

Unfortunate to lose a talented youngster but with the money that you got in for him it could be a worthwhile deal, especially short term. The lead at the top is building which is great to see, hopefully you can see it out now.

Youth Intake has certainly been good to you with some good potential coming in especially Enke. Hopefully Ager can find a spot in the system and all three reach there potential!
1
Login to Quote

An undefeated month saw 1860 Munich inch closer to securing promotion to Bundesliga 2 in March. A late winner from Osei Owusu started the month for Die Löwen against FC Hansa Rostock followed by a dominant win over Chemnitzer FC included a goal on debut for promising midfielder Antonio Trograncic.

Fabian Greilinger proved the difference against SG Sonnenhof Grossaspach before finishing with a bore draw against SC Preussen Munster to end the month. 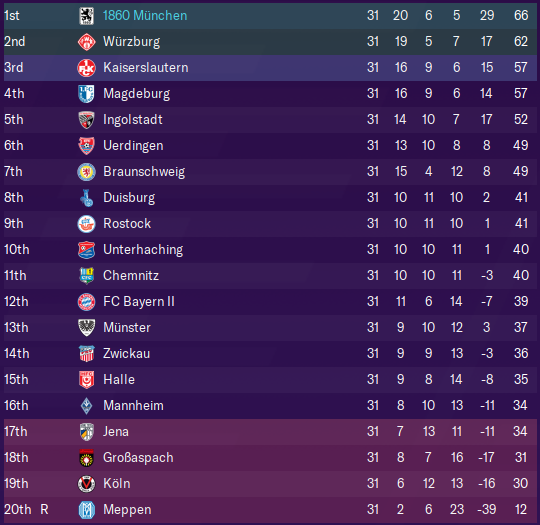 FC Wurzburger Kickers remain in striking distance of 1860 Munich in second place while 1. FC Kaiserslautern and 1.FC Magdeburg continue to fight it out for third place as well as the opportunity to play-off against the third lowest ranked team in Bundesliga 2 for promotion.

At the bottom of the table, in no surprise, SV Meppen are officially the first team to be relegated from 3. Liga after an incredibly poor season. 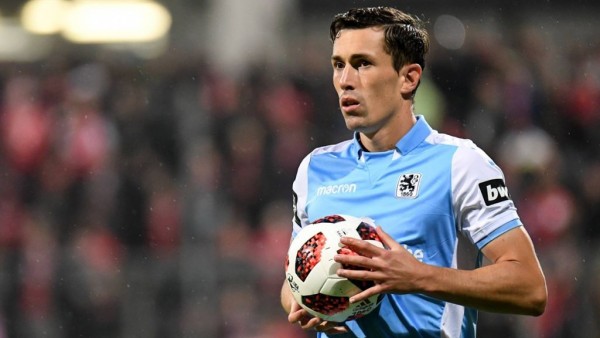 After having to adapt his game to a new tactic this season, Phillipp Steinhart has come on strong at the back end of the season. Leading the 3. Liga competition in assists, the 27-year-old German has been crosser into dangerous positions as well as a constant threat in dead ball situations.

Aaron Berzel who has filled in at a number of positions this season is out injured with a foot problem but will be ready for the match against 1. FC Kaiserslautern.

A calf issues will see Dennis Dressel be unavailable for the fixture against FC Wurzburger Kickers.

23-year-old back up goalkeeper Marco Hiller will not be on the bench for the first match of the month after pulling up sore with a groin complaint.

April is set to be a critical month in the 3. Liga competition for 1860 Munich, facing FC Wurzburger Kickers and 1. FC Kaiserslautern. They will then face rivals FC Bayern II in an always dangerous fixture before finishing the month on the road against eighth placed MSV Duisburg.

TheLFCFan: That is a big response haha, I was really happy with the youth that came into our program but just like with Lang, the bigger clubs will come looking
Login to Quote

TheLFCFan
1 year
Well could you ask for two bigger fixtures to start of the month? Those games could be the difference between winning the title or falling at the final hurdle. I have faith you will pull it off!
1
Login to Quote

A tough run of fixtures saw 1860 Munich extend their undefeated streak to eight matches, claiming six points in April. Osei Owusu was in fine form once again, leading his side to a 2-0 victory over second placed FC Wurzburger Kickers followed by also sealing a draw despite being down to 10-men by converting a penalty against 1. FC Kaiserslautern.

Another two draws followed, with Philipp Steinhart ensure a 1-1 result against rivals FC Bayern II with Stefan Lex scoring late to earn one point for 1860 Munich against MSV Duisburg 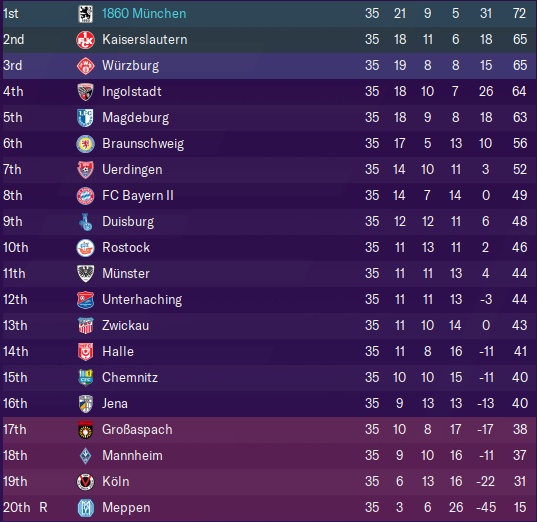 1860 Munich require three points from their next three matches to seal the 3. Liga title while the race for promotion has heated up with four teams separated by just two points.

At the bottom end of the table, FC Viktoria Koln look almost certain to join SV Meppen in being relegated. 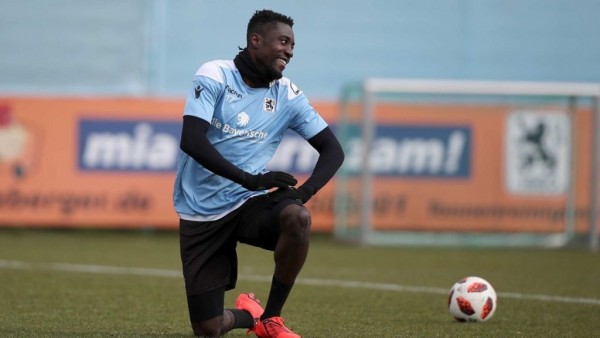 Scoring three goals from four matches in April, Owusu continues to lead the charge for 1860 Munich. The Ghanaian required two goals from the next three matches to claim the record of the most goals scored in a season in the 3. Liga.

The 23-year-old prove hard to replace when he returns to parent club DSC Arminia Bielefeld at the end of the season.

Suffering from pulled knee ligaments, the 19-year-old Russian defender could miss one to two matches.

It is a relatively easy finish to the 3. Liga season, facing two sides in the bottom half of the table separated by a tough fixture against Eintracht Braunschweig who held 1860 Munich to a 1-1 draw last time they met.

TheLFCFan: Really happy with the results I managed to pick up, but the job is not done yet.
Login to Quote