MJK46
1 year
You should keep Owusu
1
Login to Quote In preparation for their first Bundesliga campaign since the 2003-04 season, 1860 Munich have strengthened their defence by bringing in Armel Bella-Kotchap for €3,300,000. He replaces Tosin Adarabioyo who was on loan from Manchester City last season and has since moved on free transfer to Bundesliga rival Fortuna Dusseldorf.

Born in Paris, France, the central defender of Cameroonian descent moved to Germany with this family, making his way through the system at VfL Bochum, becoming a starting player for the past two seasons in Bundesliga 2. Bella-Kotchap brings a well-rounded set of skills to 1860 Munich with his athletic ability and strength proving to current be his greatest asset.

“Moving to 1860 Munich is going to help further develop my career as a footballer. Playing in the Bundesliga is going to be an incredible experience and I am grateful for the opportunity.” said Bella-Kotchap. “I am looking forward to getting settled in, meeting my new teammates and getting into our preparations for the upcoming season.” he added.

In other related news, Tim Rieder is set to return to 1860 Munich on a free transfer to add depth to the defence. The 27-year-old was part of the 1860 Munich side which claimed the 3. Liga title two seasons ago. Last season, Rieder played for FC Augsburg making just one league appearance.

ScottT: The squad will be unbalanced in skill until we are established in the Bundesliga for consecutive years

Jack & TheLFCFan: Adarabioyo leaving hurt but I just could not afford his wages

walkinshaw: We will certainly have to fight hard to avoid relegation

MJK46: Owusu was signed at the start of the season already
Login to Quote

Jim
1 year
Very nice signing for a Bundesliga side. Will surely develop throughout the season so that's something for you to look forward to!
1
Login to Quote

ScottT
1 year
A good signing added to by the return of a more experienced head. A balance needs to be found in that sense and it appears that has been recognised. Intrigued to see how he fairs in the top-flight.
1
Login to Quote

TheLFCFan
1 year
Adarabioyo replaced already which is great to see. He's going to be needed to help the club perform this season in what is going to be a very tough year for 1860.
1
Login to Quote

After finishing their training camp in Germany, 1860 Munich travelled to Italy for their pre-season fixtures. Both strikers were in good form with Maximilian Pronichev scoring five goals and Osei Owusu scoring four with 1860 Munich finishing the four-match tour undefeated.

The 29-year-old Berzel damaged his achilles tendon during the pre-season, a horrid injury that will see him unavailable for two to four months.

The starting right back for the past two seasons, Paul suffered damage to his knee ligaments and will be out of action for two to three weeks.

Suffering a broken wrist during the pre-season, Tim Rieder will play through the injury using a brace but is expected to take four to six weeks to recover.

Starting the season with a favourable fixture against Fortuna Dusseldorf the media set to focus on Tosin Adarabioyo who will play against 1860 Munich after being on loan with the club last season. A tough away fixture against RB Leipzig follows, finishing with a match against mid-table club VfB Stuttgart.

Jim & TheLFCFan: I was amazed Bella-Kotchap was still yet to be picked up by a big club so I am very happy with the signing

ScottT: I was looking to add depth to the squad and saw Rieder on the free transfer list, I almost had to bring him back
Login to Quote

ScottT
1 year
A good pre-season campaign. Fortuna Dusseldorf, with all due respect to them, are a good opening opposition to face. A great opportunity to start the season right. The cup should provide no issues for you.
Login to Quote As they continue to strengthen their squad for the 2021/22 Bundesliga season, 1860 Munich have signed 22-year-old striker Musa Barrow. The club has paid Atalanta €300,000 up front for Barrow and are set to pay a further €3,000,000 over the course of the next twelve months.

An athletic and ambitious striker, Barrow has great acceleration, agility and pace, playing 67 games for Atalanta, scoring 11 goals across four seasons. The Ghanaian made his international debut against Algeria in 2018 and has since represented his country 22 times so far for a total of 9 goals.

“When the opportunity to move to 1860 Munich was presented to me, I was excited for the prospect of a playing in another country.” said Barrow. “I believe that the Bundesliga is the best competition to allow me to become a better player, I am looking forward to making my debut and helping my club to positive results.” he added.

Daniel Bierofka has also reacted to the injury crisis at the right back position with three players capable of playing the position currently injured by signing Ki-Jana Hoever on loan from Liverpool for the rest of the season. It was expected that 1860 Munich would improve the right back position regardless given it being a weakness for the side in the past two seasons.

ScottT: Fortuna Dusseldorf will hopefully help us get off to a good start to our first season in the top flight.
Login to Quote

TheLFCFan
12 months
A great addition to the squad who will provide competition up front. Although based on those pre-season results, goals aren't a worry!
1
Login to Quote

ScottT
12 months
Despite a fairly average goal-return at Atalanta, Barrow certainly has the potential to be an excellent player for 1860. A sensible signing to make given the fee in which the Italian side requested for his services. Hoever will be a good option to have, although it's disappointing to hear about the circumstances in which he's been brought in. Injuries are always unwelcome, but especially when you're new to a division and looking to consolidate yourselves against all the odds seemingly.
1
Login to Quote

MJK46
12 months
This is going to be a massive signing for you!! Can't wait to see what he does.
1
Login to Quote

1860 Munich Sneak Through In DFB-Pokal 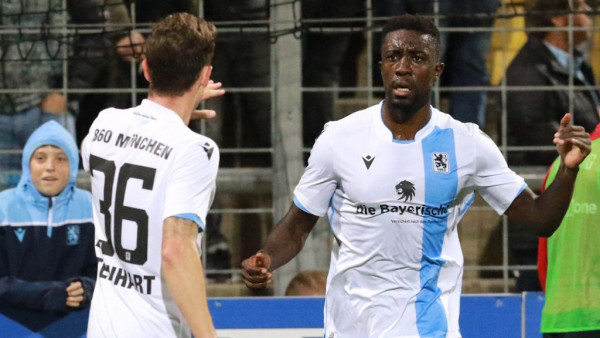 After drawing a non-league side in their opening fixture of the 2021 DFB-Pokal, 1860 Munich played a second-string side against FC Wegberg-Beeck in a bid to ensure their starting players would avoid injury prior to their opening Bundesliga fixture the following week.

It was a decision which did not appear to be too promising when Die Löwen entered the half time break without producing a clear chance. Sensing an opportunity, FC Wegberg-Beeck came out in the second half playing with high energy and aggression, seeing three players receive yellow cards in the space of fifteen minutes, applying constant pressure on the 1860 Munich players.

Despite the pressure, this approach would then become the downfall of FC Wegberg-Beeck when Aldin Kljajic brought down Robin Hack inside the box, receiving his second yellow card and putting his side down to ten players. It was Osei Owusu who stepped up to take the penalty for 1860 Munich, placing the ball into the bottom right corner to break the deadlock and seal victory for his side.

1860 Munich have drawn Bundesliga 2 side FC St. Pauli in the second round of DFB-Pokal, it is expected to be an interesting match with FC St. Pauli come away victorious in their two league fixtures last season.

TheLFCFan & MJK46: Barrow is a player I have always wanted to bring in from past editions of FM, really looking forward to seeing what he can do.

ScottT: Hoever will certainly be an upgrade at the position but whether a young player can be consistent at this level is yet to be seen.
Login to Quote

ScottT
12 months
Certainly not a convincing result, but the ultimate aim is met in ensuring your progression to the next round. A much bigger game awaits against Dusseldorf.
1
Login to Quote

TheLFCFan
12 months
Osei scoring! You love to see it!
1
Login to Quote